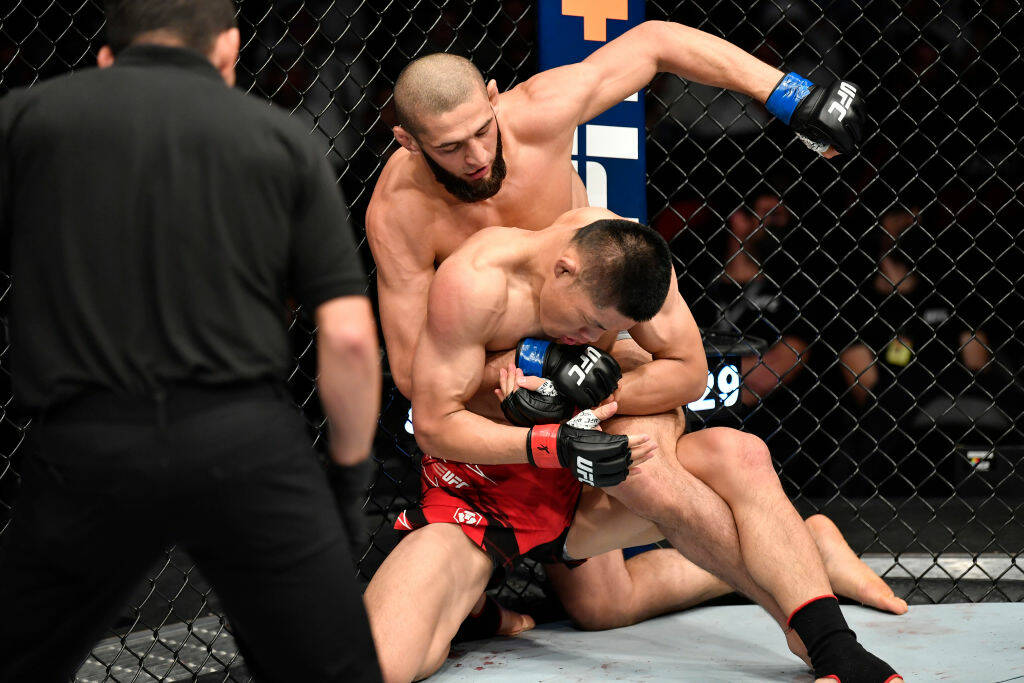 Khamzat Chimaev wanted to make sure UFC president Dana White got a good look at what he was about to do to veteran Li Jingliang on the main card of UFC 267 on Saturday in Abu Dhabi.

So moments into the fight, Chimaev lifted Jingliang off the ground and planted him on the mat in front of White.

Then he went to work on Jingliang, offering his own commentary to White as he did it.

Chimaev blasted Jingliang with right hands until he flattened him out, then locked in a choke and didn’t let go until Jingliang went to sleep and the fight was stopped.

Also on the card, Petr Yan won the interim bantamweight title with a thrilling unanimous decision over Cory Sandhagen, and 42-year-old Glover Teixeira took the light heavyweight belt from Jan Blachowicz in the main event.

But Chimaev again stole the spotlight, improving to 10-0 with 10 stoppage victories as a pro, including four since signing with the UFC last year.

“Soon I will take over the UFC,” said Chimaev, who noted he saw White on his cellphone and wanted to make sure he was paying attention to his performance. “I’m the biggest fighter in the world now.

Chimaev’s biggest challenge might be finding someone to accept a fight. He set a record by getting his first three wins in the UFC in 66 days, then had trouble finding an opponent. When he finally did, Chimaev had to pull out after testing positive for COVID-19, which almost cost him his career.

The 27-year-old briefly retired this year when it looked as if he might not regain his conditioning.

He looked fine Saturday in his return from more than a year out of action. Several contenders might be wishing he had stayed away.

“We’ll see if someone wants to fight me,” Chimaev said. “I will kill everybody. Do you believe me now?”

Teixeira became the second-oldest champion in UFC history behind Randy Couture by submitting Blachowicz in the second round of the main event.

It was the 21st UFC fight of Teixeira’s career and his first shot at the belt since he lost to Jon Jones in 2014.

“I have no words to describe it,” Teixeira said. “I was thinking of so many things. I thought about what I was going to say. I don’t have it. I’m breaking the rules. I’m 42 years old. I’m going to keep breaking those rules.

“Never give up on your dreams, no matter what people say, don’t listen to them. Believe in yourself and keep going forward.”

Yan outlasted Sandhagen in a back-and-forth matchup that earned both fighters a bonus from White as the most entertaining bout on the 14-fight card.

The interim belt was created when champion Aljamain Sterling pulled out of his rematch against Yan because of an injury. Sterling won the belt when Yan was disqualified against Sterling for an illegal knee strike to the head of Sterling when he was on the mat.

Yan has accused Sterling of playing up the impact in order to get the fight stopped and thinks the champion is putting off their fight as long as possible to keep the belt.

“Everyone knows I’m the real champion,” Yan said. “I’m here to fight anyone, either T.J. Dillashaw or the clown Sterling.”

Dillashaw is a former champion coming off a win over Sandhagen, but couldn’t fight in the interim title bout because of a knee injury.

Sandhagen had success early, but Yan took over late in the second round and left Sandhagen little to complain about on the scorecards.

“He’s a hell of a fighter,” Sandhagen said. “He was just better tonight. I always want to fight the best in the world, and I’m grateful I got to do that tonight. I’ll take from that and learn from that.”