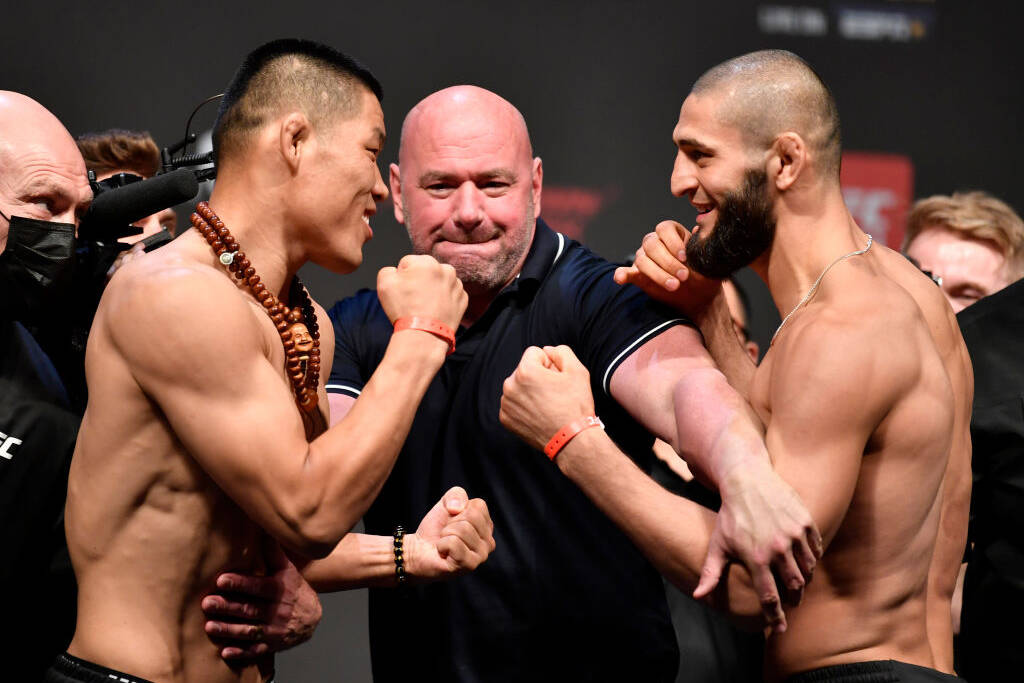 The UFC returns to Abu Dhabi on Saturday with a stacked card featuring a light heavyweight title bout and a showdown for the interim bantamweight belt.

Yet the biggest attraction is a phenom who has been away from competition for more than a year and has spent less than 10 minutes fighting inside a UFC cage.

Khamzat Chimaev made that much of an impression when he burst onto the scene in 2020 and will look to continue to build on his astonishing success when he returns against Li Jingliang at UFC 267 on Saturday.

Chimaev immediately asked for another fight, and his wish was granted. He then made quicker work of Rhys McKee 10 days later with a first-round knockout in the same venue.

Fans clamored for more of his swarming style, so UFC officials brought him to Las Vegas for a fight against a veteran with a more accomplished resume.

It was no problem for Chimaev, who needed 17 seconds to knock out Gerald Meerschaert in September 2020. The end result was a record for the fastest three-fight winning streak in modern UFC history at 66 days.

Chimaev was the talk of MMA, and UFC president Dana White couldn’t give an interview without talking about the 27-year-old rising star.

Then it was nearly all over.

Chimaev contracted COVID-19 and was hospitalized multiple times as he tried to push himself through workouts too early in his recovery. He briefly announced his retirement as he grew frustrated with the process.

Now he is fully healthy and ready to continue wrecking every obstacle in his way, which mostly consists of overmatched welterweights.

He is 9-0 as a pro with nine stoppages, and the only three fighters to make it out of the first round were finished within 75 seconds of the second round.

Chimaev is ready for a challenge against Jingliang, who was submitted once in 2015 but hasn’t been knocked out in 24 career fights.

“I hope he’s gonna give me some fight,” Chimaev said in a video posted on the UFC website. “Not finish him in like one minute or two minutes. I want to fight more because I’m hungry. I didn’t fight for one year, and I hope he’s gonna go two or three rounds.

“I don’t have plans for the fight. I just go in and fight. Everything comes natural. Just go in and kill him.”

Chimaev stepped up to middleweight for the Meerschaert fight because he was willing to take on any opponent, but he’s back at 170 pounds and plans to stay there for now.

He said the plan is to move up the ranks at welterweight, win the title “and then go to 185 pounds and smash the champion there, too.”

He’s not in a hurry, though. Chimaev said he’s willing to take out every fighter ranked in the top 10 to get a title fight.

Champion Kamaru Usman will defend the title against Colby Covington at Madison Square Garden in New York on Nov. 6.

While Chimaev will have his eyes on that bout, particularly if he scores an impressive win Saturday, he doesn’t expect to be impressed by what he sees.

“Nothing special,” he said of his analysis of the championship matchup.

Chimaev, however, insists he’s not a trash-talker.

Also on the card, Jan Blachowicz will defend his light heavyweight belt against Glover Teixeira, and former champion Petr Yan will fight Cory Sandhagen for the interim bantamweight title.

The main card streams live through ESPN+ at 11 a.m. Saturday, with the preliminary card beginning at 7:30.