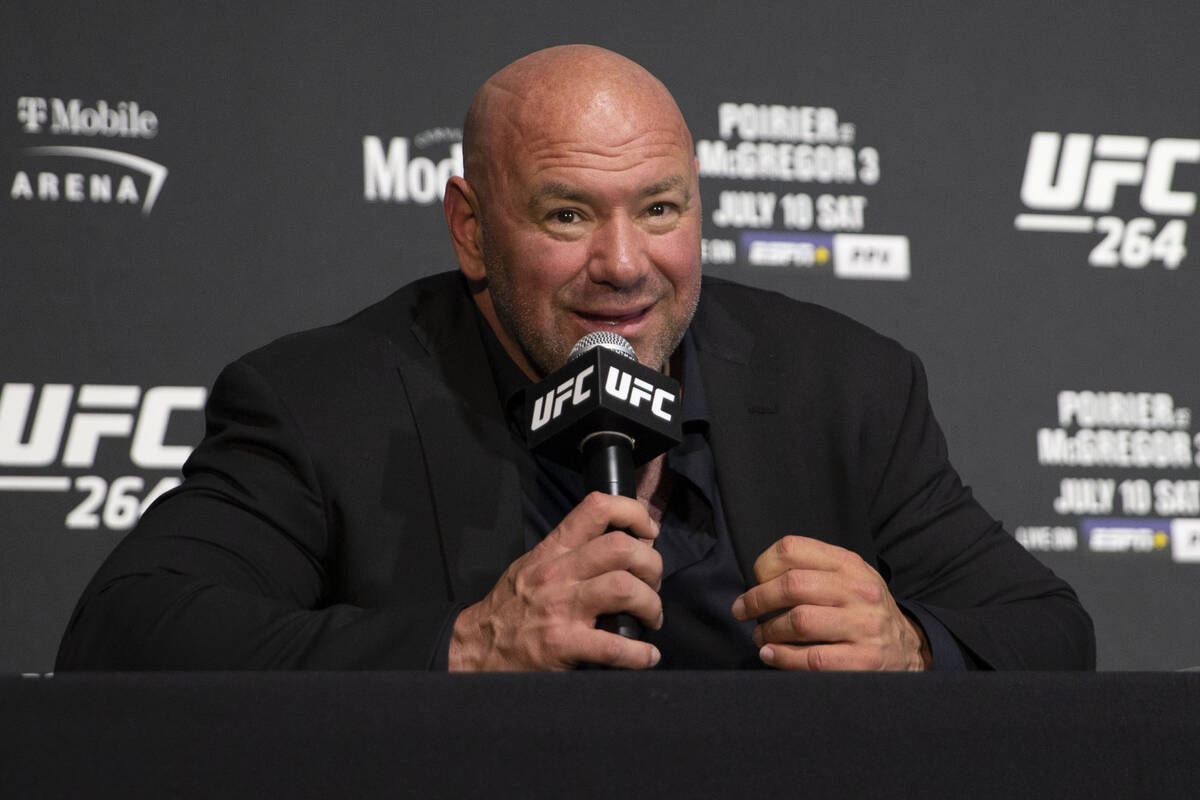 UFC president Dana White remains proud of the company’s work in becoming the first major sport back in business during the height of the COVID-19 pandemic in 2020.

He’s even more excited about what was accomplished by the MMA promotion in 2021.

“It was the best year we ever had,” White said in his sprawling second-floor office at the company’s headquarters in southwest Las Vegas. “We’re popping on every metric you can imagine. Sponsorship is through the roof. Social media, our numbers on pay-per-view, our numbers on television, arena records. This business is on fire.”

According to White, social media subscribers are up 41 percent year-over-year and YouTube numbers are up 31 percent. Viewing hours on TV and over-the-top platforms, as well as visits to the UFC’s website and all other numbers have increased at better-than-expected levels.

The UFC’s success, spurred in part by its decision to continue hosting live events at a time when other professional sports were paused and there was little competition in the marketplace, was a major driving force in parent company Endeavor topping earnings projections in the third quarter.

“How are you not going to bet on me now?” White said. “If you look at the 20-year history of our company, we went through the recession of 2008 to 2010. Then we go through a pandemic in 2020 and 2021. I keep looking at all the places we still haven’t gone. Then there are so many little tiny details I could tell you about our business that the room for growth is unbelievable. There is no ceiling.”

The UFC topped its record for most pay-per-view sales in a year in 2021, and White said he thinks the all-time indoor live gate record for California will fall when the company hosts UFC 270 on Jan. 22 in Anaheim, the first major card of 2022.

Part of the UFC’s ability to thrive despite the global impact of the pandemic was because the company had built a facility adjacent to its headquarters where it could host live weekly events on essentially a closed soundstage where it could control the environment. That also meant securing two hotels to house fighters, judges, referees, commission officials, staff and even some media where they could be tested and mostly quarantined.

The Apex has been a godsend for the UFC, and White said economically it would make sense to continue running weekly Fight Night events there because production costs are minimal, then going on the road only for major pay-per-view shows in states where restrictions would allow for full venues.

White, however, said he thinks it’s important to take the show back on the road at some point.

“Doing shows over at the Apex is like sitting at home in your underwear doing a Zoom call,” he said. “It’s very cozy and comfy, but it’s not the way to run a business. We built this off going to places like Omaha, Nebraska, and all these towns that don’t get fights. We bring these events in, and when you experience a live fight, it makes you an even bigger fan. It’s something that needs to be done.

“I know we have to get back on the road, but I’m OK staying here until everything is somewhat normal again.”

White understands the first question that always will be asked when touting the company’s success is how much is being passed on to the fighters. He disputes numbers that have been made public suggesting minuscule portions of the profits going to the athletes, but said more money in the company’s coffers will always mean more for the athletes.

“Fighter pay is why I usually don’t beat my chest and talk about how great we’re doing,” White said. “It has gone up by a massive amount since 2016. All the champions share in PPV money, and we’re setting records there. Trust me, everybody is making money. We worked through the pandemic and kept all of our employees and kept the fighters working. Fighter pay has continually gone up.”