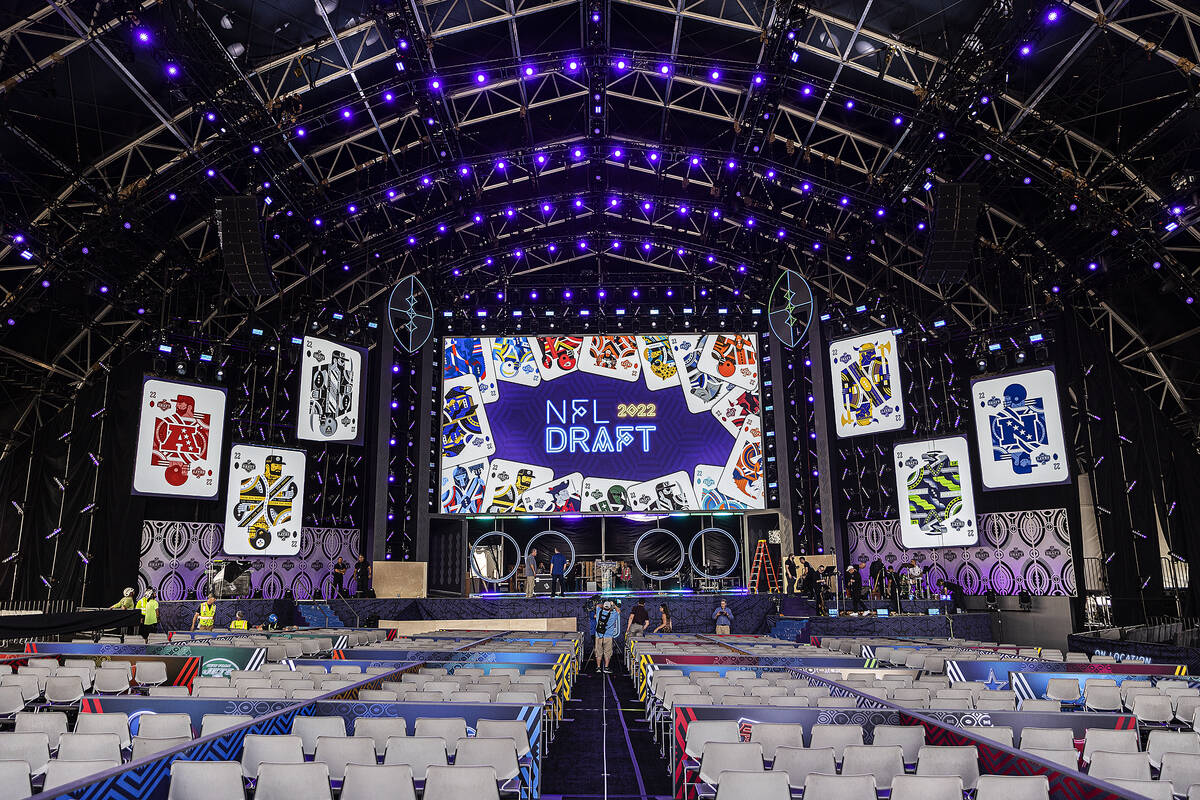 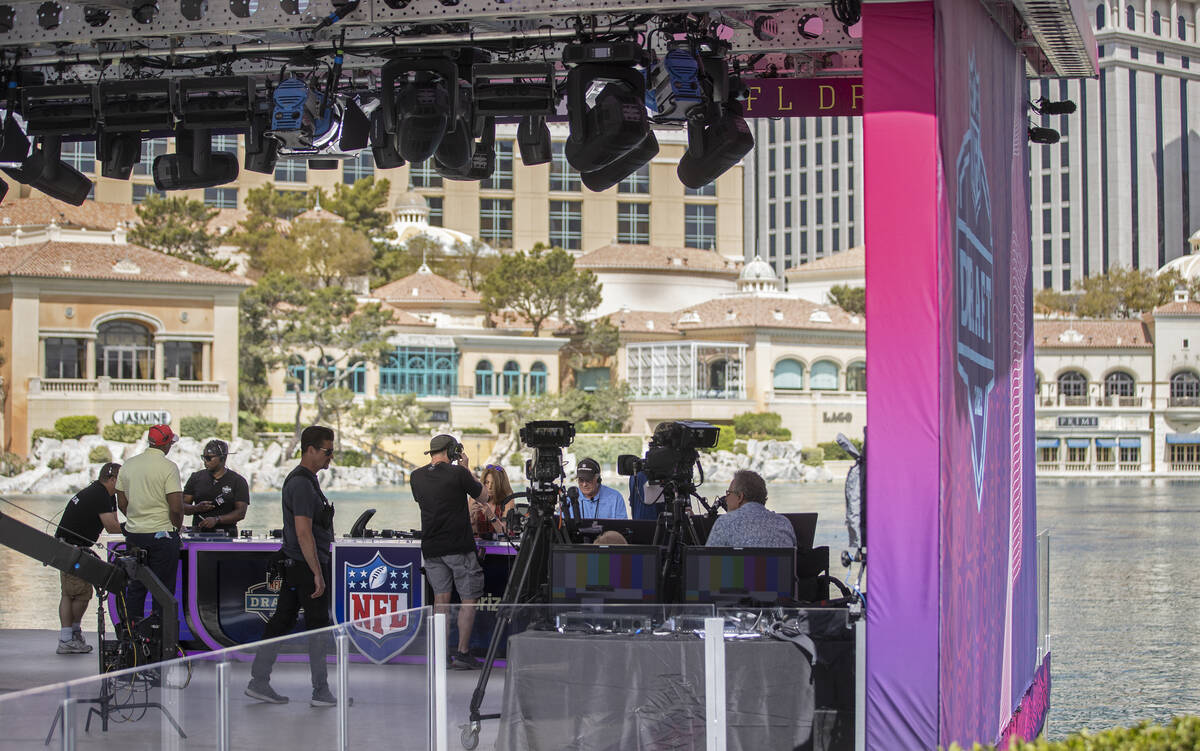 There was a time when the NFL draft was held in a ballroom at a New York hotel with teams choosing from a list of 90 names on a whiteboard with little to no fanfare about the selections.

Now more than 1,000 credentialed media members are descending on Las Vegas along with more than an estimated half-million fans for a happening that has become the second-biggest event on the league’s calendar.

While the Super Bowl, which will arrive in Las Vegas in 2024, has nearly six times as many media members covering the week of festivities, the draft has grown from complete obscurity into a media phenomenon.

Each step along the way has been met with skepticism. Few in the industry, either on the TV or football side, believed anyone would ever watch the draft when fledgling ESPN proposed airing it to viewers in 1980.

Ratings were modest until it was moved to the weekend in 1988 and started to gain momentum.

When ESPN and the league decided to go prime time with the event in 2010, eyebrows were once again raised.

Even Trey Wingo, a longtime staple of ESPN’s draft coverage, admits he questioned the decision.

“When they said they were moving the draft to prime time, I thought it was crazy,” said Wingo, the chief trends officer and brand ambassador for Caesars Sportsbook. “That was when Thursday night on NBC had “The Office” and “Parks and Recreation.” Those were so tough to go against. It doesn’t matter. They crushed it.”

At the time, Variety called the 35 hours of draft programming ESPN had planned an “astonishing” amount of coverage.

Now the first two nights of the draft air in prime time on ABC, ESPN and the NFL Network, which is showing more than double that amount of programming this week alone. That number is only going to grow.

So is the draft’s footprint, which started expanding geographically in 2015 when the league began moving to different cities.

Eric Finkelstein, the NFL’s senior director for events planning, said the draft and coverage of it are growing for the same reason.

The fans want it. People travel to the draft, spend their money on it and perhaps most importantly, consume draft-related content in large quantities.

“What started in a board room behind closed doors in 1936 with no cameras or anything, ESPN pushed in to show the process and the fans have really taken this to a whole new level,” said Finkelstein, who is about to go through his 23rd draft with the league.

“My first draft was only on ESPN and there were maybe 4,000 fans. It was a significant number of people, but I never imagined we could do it to this level. We wouldn’t be doing it if the fans didn’t come. It’s their event. We wouldn’t be doing this and continuing to grow and build it to the extravagant level we do if they didn’t want to be a part of it.”

Wingo agreed the fan interest is the driver of all the coverage, which includes multiple networks, streaming platforms, social media channels and broadcast sets all over town.

He said the draft has been marketed to fans who just want that taste of football a couple months after the Super Bowl and with training camps still months away, almost like a junkie looking for a fix.

“They’re searching for that one last hit where it’s like, ‘Give me the good stuff,’” Wingo said. “We’ve been without a game since the middle of February. March Madness isn’t about the college basketball tournament anymore. It’s about NFL free agency. The NFL was blackout drunk this year in free agency. So they have done a great job of keeping our attention and the draft is the culmination of all of this angst, where it’s just like, ‘Give me something.’”

Fans will have every opportunity to get their fill throughout the week.

Instead of a hotel room behind closed doors like the old days, the picks will be announced on a stage constructed in a temporary 1-million square foot venue just off The Strip with sets on either side for two different media companies to broadcast all seven rounds live over a three-day span.

And that doesn’t include all the ancillary broadcasts.

NFL Network kicked off more than 80 hours of original programming on Sunday and is hosting its studio shows live on a set overlooking the Bellagio fountains throughout the week.

Coverage of the draft and other related programming from NFL media is available across multiple devices from phones to tablets and smart TVs through the NFL app.

NFL media will produce several podcasts, many taping in Las Vegas, throughout the week. Live coverage of the draft on Thursday through Saturday will be available on SiriusXM, ESPN Radio and Westwood One.

Then there’s ESPN. The network will flood the market with content throughout the week, including a 26-hour marathon on both ESPN and ESPN2 beginning at 3 p.m. Wednesday.

ESPN’s personalities have descended upon the city and are providing content for ESPN, ABC, ESPN Deportes, ESPN-plus and social media channels.

They have a primary set at the NFL Theater, which has been built behind the High Roller and adjacent to the Caesars Forum. But programming will also originate from ESPN’s Las Vegas studios at The Linq, Beer Park at The Paris Hotel and the Caesars Forum.

It’s all about feeding the beast, which is something the NFL has perfected along with its broadcast partners.

“It’s the ultimate reality television show,” Wingo said. “None of us know what’s going to happen. The NFL does a great job of making things watchable that you thought were unwatchable. Media day used to be this thing in the afternoon. Now it’s “Opening Night” of the Super Bowl. The combine used to be this boring thing for scouts. Now that thing is prime time and I think it’s going to be the next traveling circus.”

This week, that title goes to the draft.

The tents have already been constructed and the show under the big top is in full swing even with the draft not officially kicking off until Thursday at 5 p.m.