Justin Herbert: Forcing himself to be uncomfortable to become an NFL quarterback (Las Vegas Review-Journal) 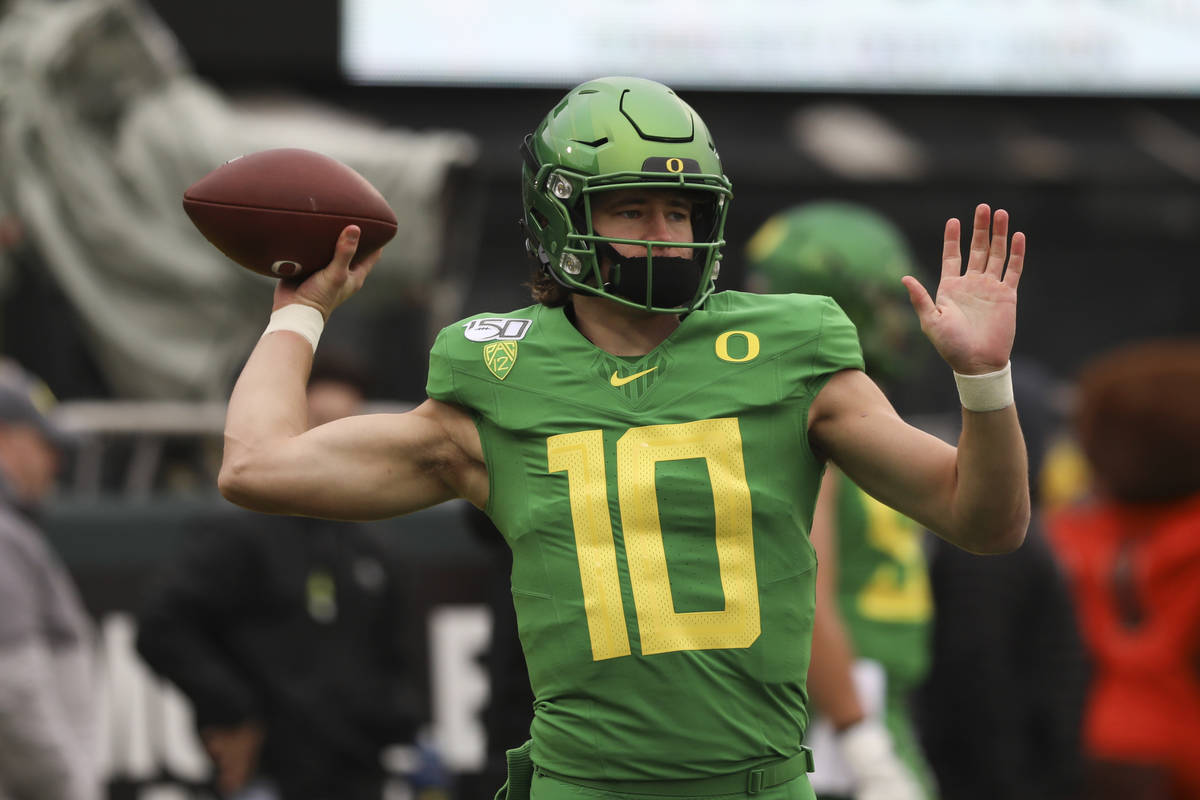 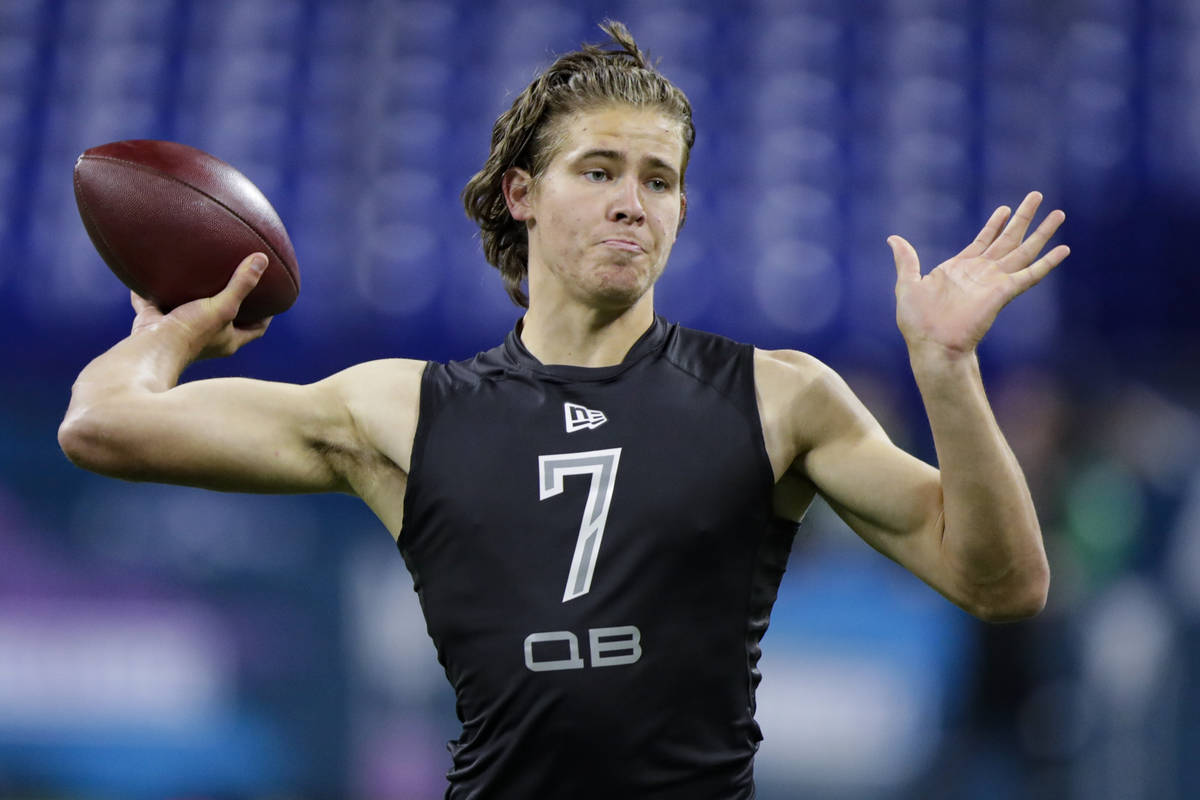 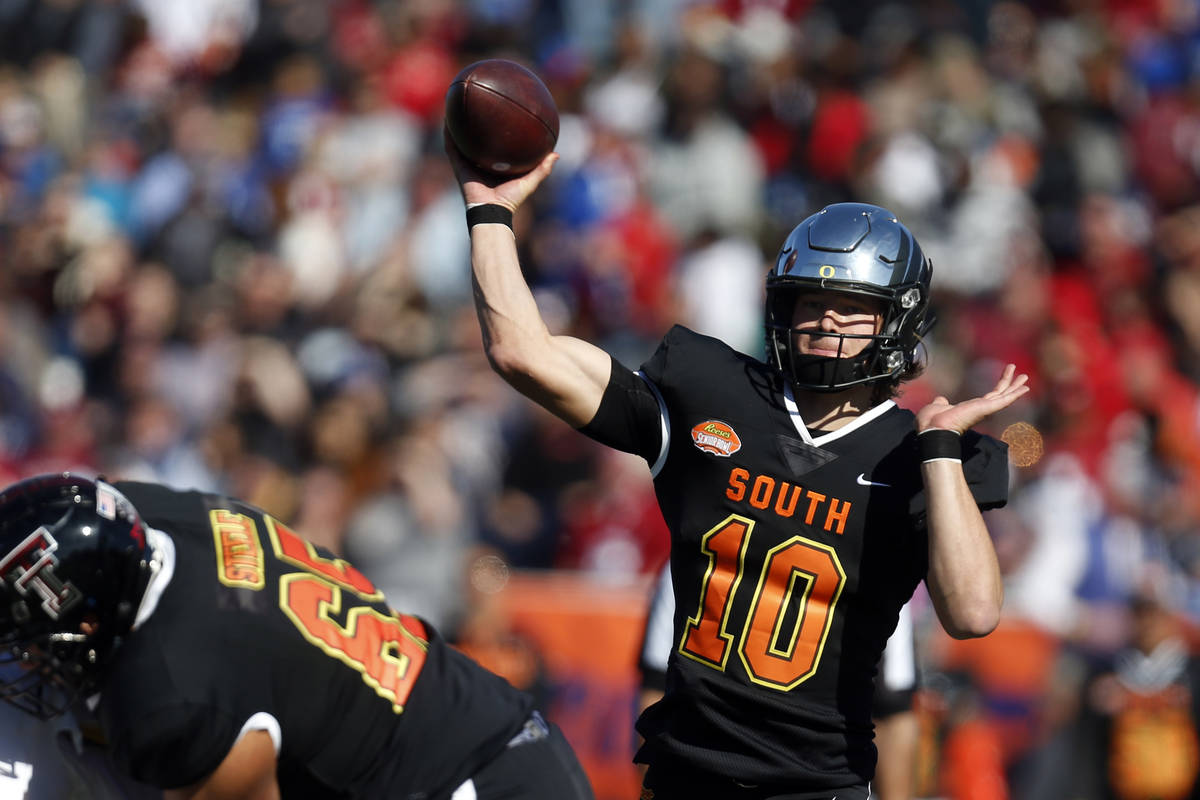 South quarterback Justin Herbert of Oregon (10) throws a pass during the first half of the Senior Bowl college football game Saturday, Jan. 25, 2020, in Mobile, Ala. (AP Photo/Butch Dill) 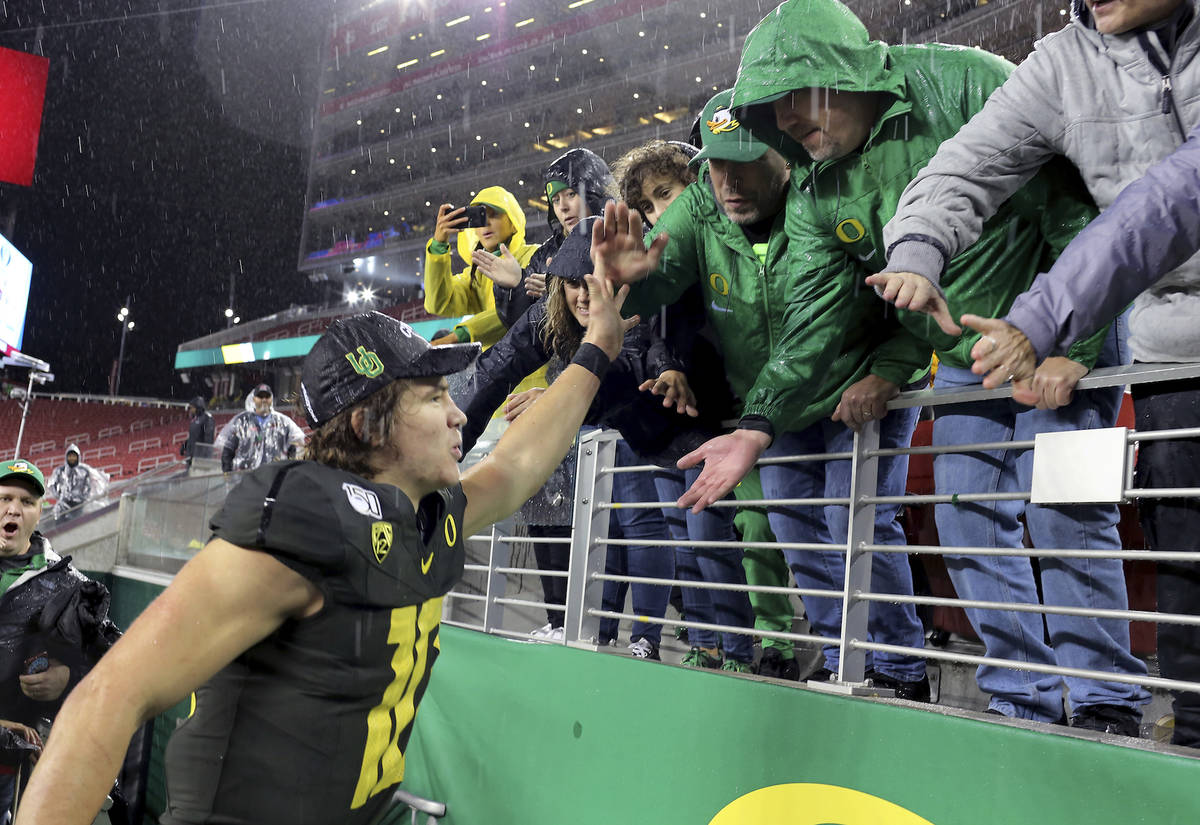 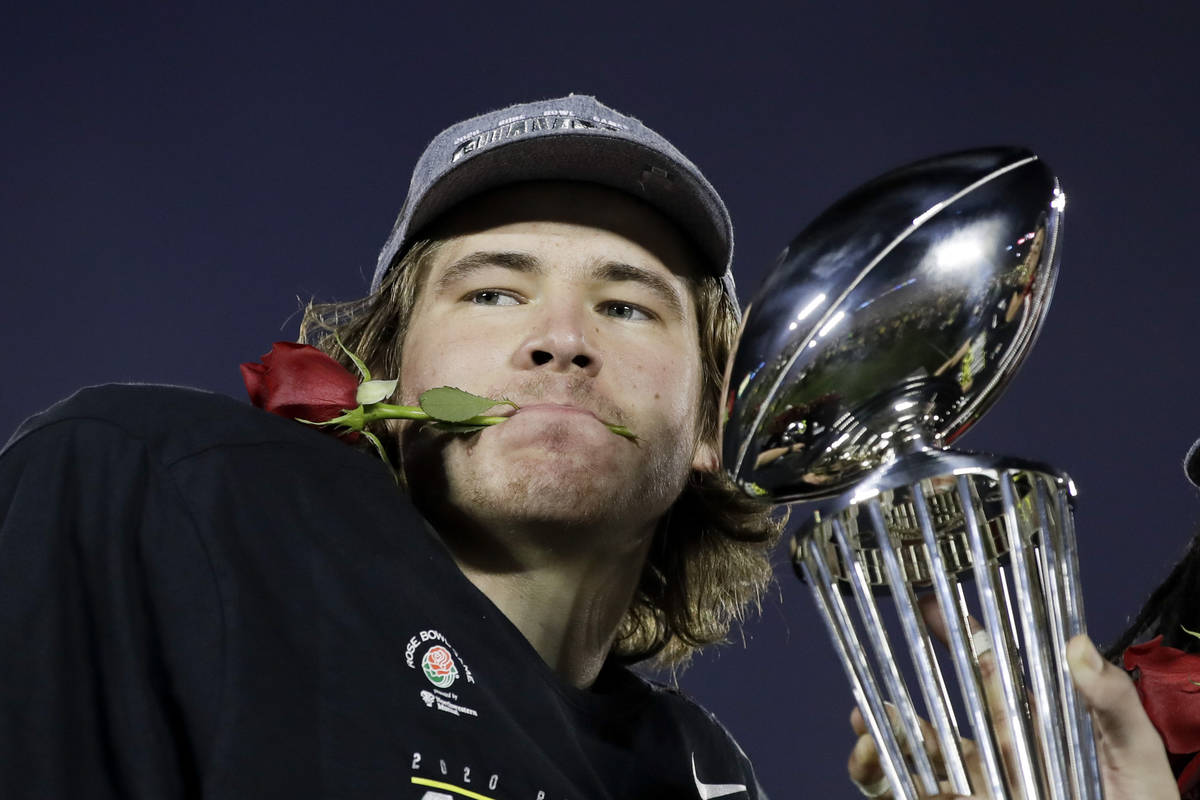 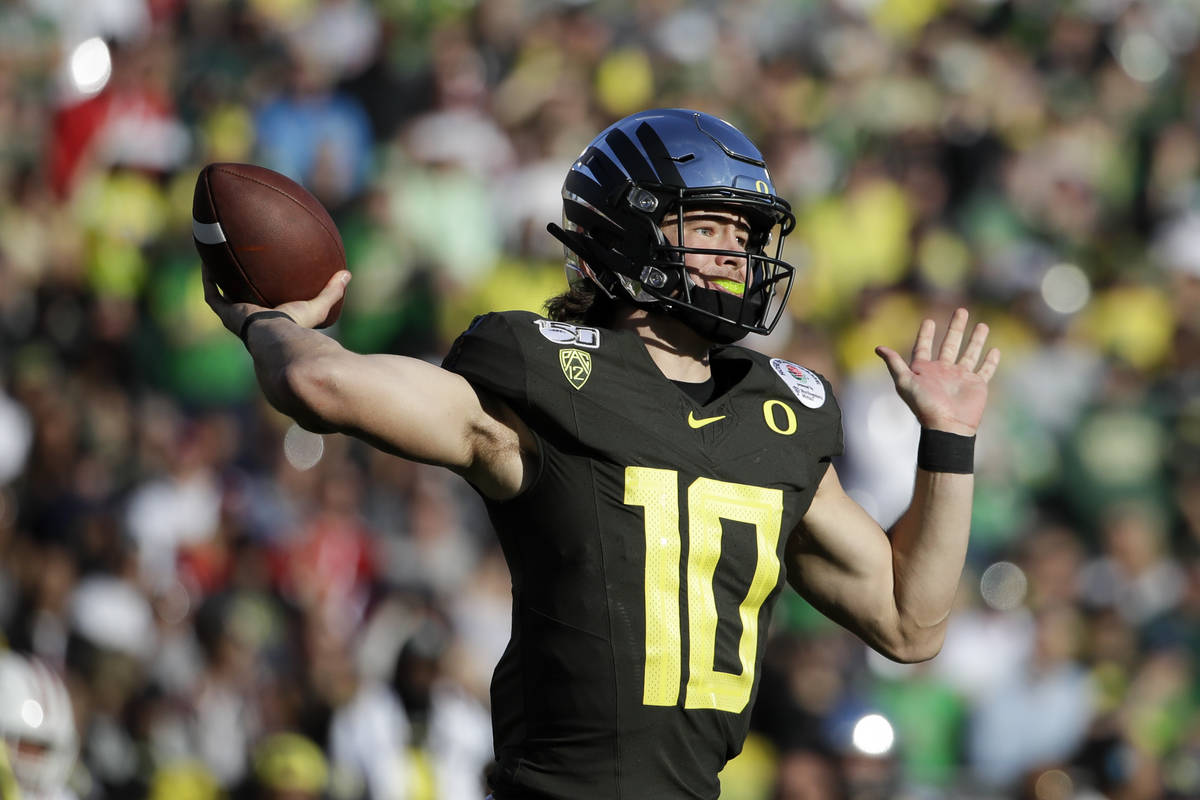 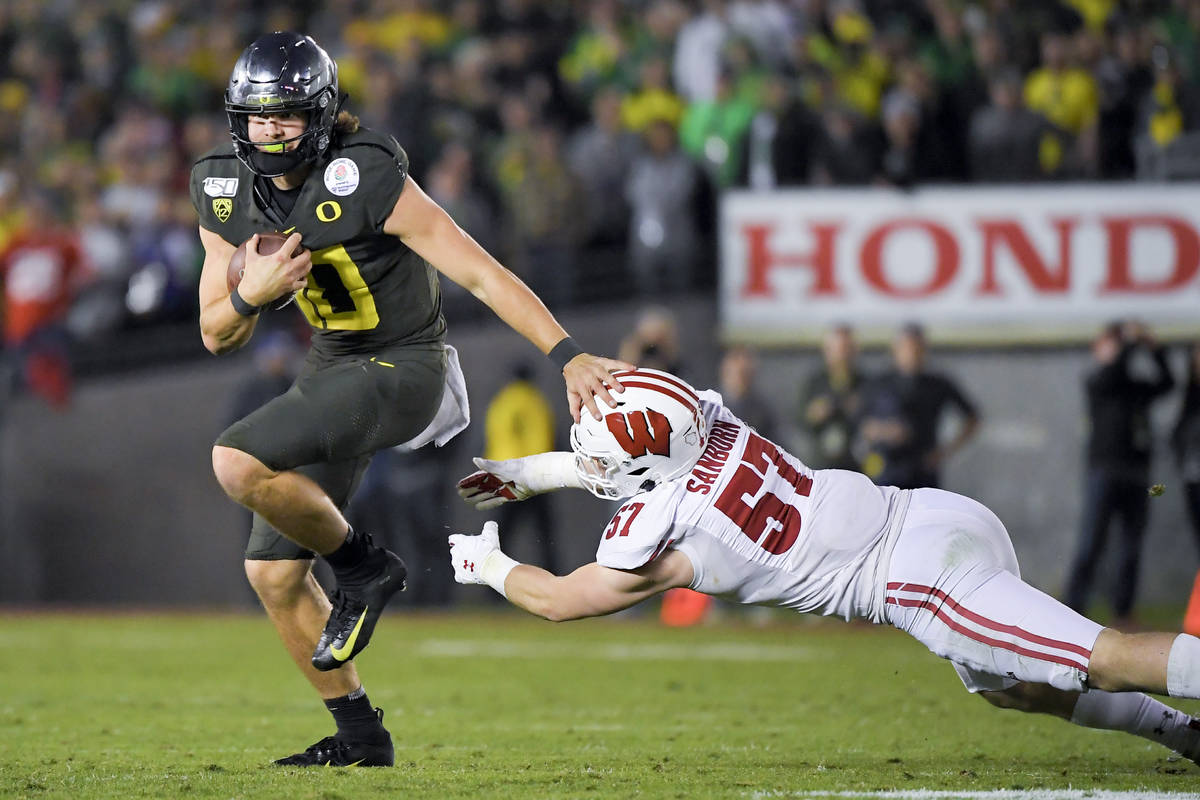 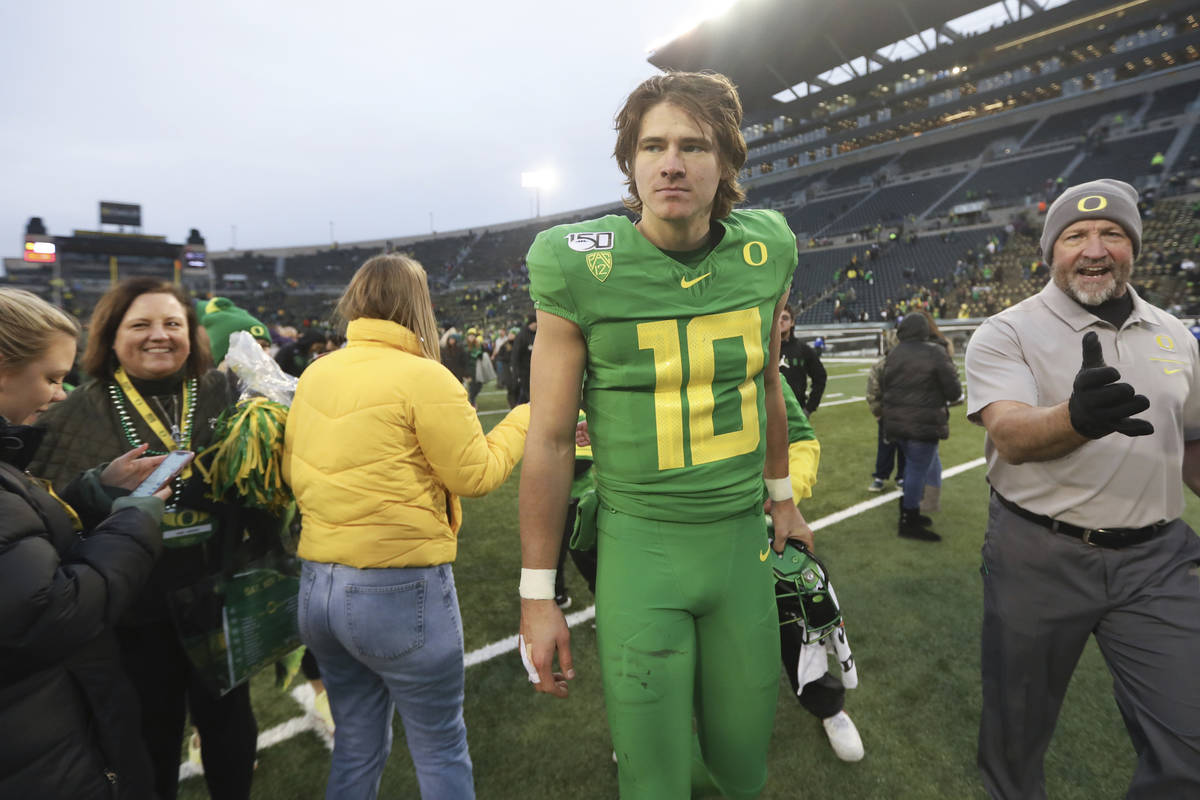 Former Oregon quarterback Justin Herbert looked like a prototypical NFL quarterback the moment the hometown hero stepped on campus in Eugene to begin his four-year career.

His demeanor in the huddle and on the sideline, however, wasn’t quite as ready for prime time. The 6-foot-6, 236-pounder’s presence didn’t quite match his stature and immense skill set.

There was never a question about his character, just whispers he was too reserved to lead an NFL franchise.

Herbert says he has made great strides in that department as he prepares for an NFL draft where he is likely to go in the top half of the first round.

“When I showed up (at Oregon), I was shy,” Herbert said at the NFL scouting combine. “I didn’t want to step on anyone’s toes. The quarterback can’t be that. To be a successful team, you have to have a quarterback who can demand from his team what he needs to get out of them.”

Herbert is by nature a more shy academic-type. He was awarded the prestigious William V. Campbell Trophy, often called the Academic Heisman, in December after posting a 4.01 GPA in biology.

The 22-year-old has expressed a desire to work in medicine when his football career is over. His quiet approach to leadership will likely be an asset in that world.

While that leadership style has been deemed a weakness in some draft forecasts over the last few years, he was still seen as the potential No. 1 pick had he decided to come out last year. He says his decision to stay at Oregon helped him mature even more before going through the draft process.

“I’m a different person now,” he said. “The kid that showed up at the University of Oregon isn’t me anymore. I’ve become more vocal. I’ve become more outgoing … the way a quarterback has to carry himself. I feel I’ve done a great job of becoming that over these past four years.”

The return to school paid off on the field, as well. Herbert’s Oregon team fell short of qualifying for the college football playoffs, but finally won a Pac-12 title. He also had the chance to spend a year in the program with his younger brother, tight end Patrick Herbert

“I wanted to come back to finish out with the guys I came in with,” Justin Herbert said. “We went 4-8 my freshman year, but our group of seniors stuck with it and ended up going 12-2. We fell short of the (playoffs), but won the Rose Bowl.

”I wanted to finish school, become a better leader and a better player. These are all things I feel like we accomplished this year.”

With his eligibility exhausted, the decision to turn pro has been made for him. He’ll find out April 23 where he will continue his career. He has been enjoying the pre-draft process.

Herbert followed an offensive MVP award at the Rose Bowl by winning the MVP at the Senior Bowl. Then he was one of the top performers among the quarterbacks participating at the combine.

After excelling in the passing drills, he turned in a strong 4.68-second performance in the 40-yard dash and finished as the best quarterback in the three-cone drill (7.06 seconds), second at the position in vertical jump (35.5 inches) and third in the broad jump (10’3).

His size, arm strength and sneaky athletic ability have drawn comparisons to Carson Wentz, though Herbert says the pro he has studied the most is Matt Ryan. Herbert is particularly fond of Ryan’s mechanics and ability in the play-action game.

Herbert, who once again showed off his huge arm when he threw the ball 62 yards flat-footed at his pro day in early March, has spent the time since wrapping his college career in the hurry-up, shotgun offense at Oregon proving he can operate under center and get the offense in and out of a huddle.

“He can throw the football like no other,” draft analyst Mel Kiper Jr. said on ESPN. “You look at that. Something was missing at Oregon. Well, the Senior Bowl week, he was the best quarterback on the field. Great Senior Bowl game, great combine, tremendous kid. Doesn’t throw with great anticipation, but he got better once he got out of Oregon’s offense.”

Herbert said it’s been fun proving he can do those things and says the offense prepared him just fine for life running an NFL system.

“A lot of the stuff fell on me to flip protections and change runs,” he said. “I really enjoyed that offense. I’m looking forward to being (in the NFL) and learning as much as I can.

He won’t have to wait much longer to find out where he goes.