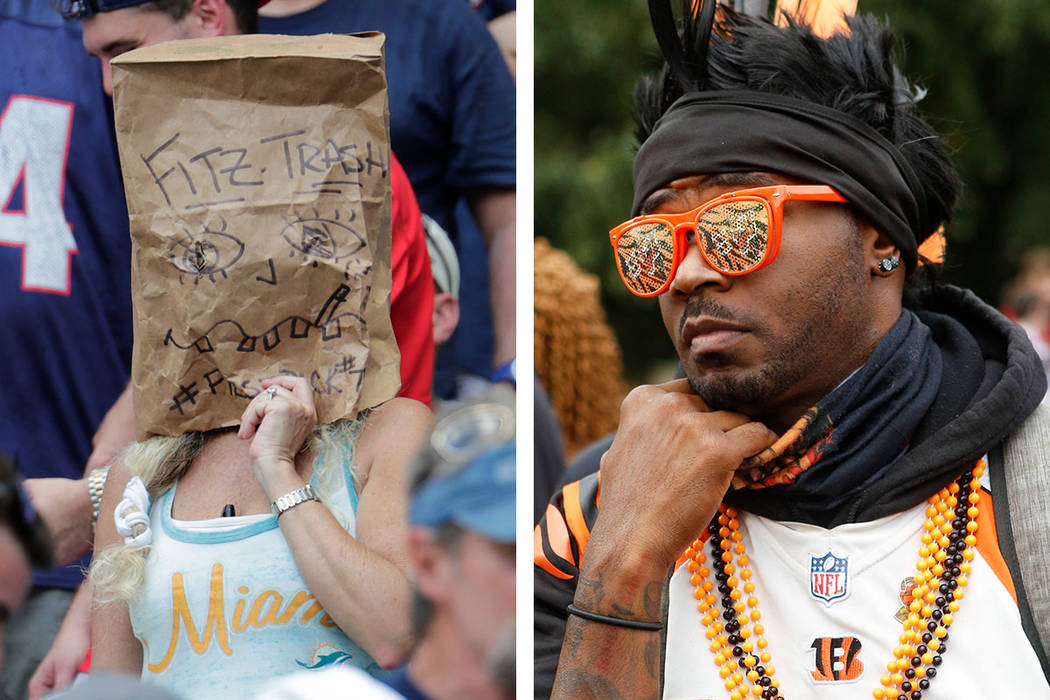 The fans of the Miami Dolphins (left) and Cincinnati Bengals might be happier if they get to see their team make the No. 1 selection in the NFL Draft on April 23, 2020, in Las Vegas. (AP file photos)

As NFL Week 6 concludes Monday night in Green Bay, Wisconsin, some teams are reassessing their playoff chances —or lack thereof.

And then there’s the Miami Dolphins (0-5), who handed the Washington Redskins their first victory of the season, a 17-16 decision watched by several at Hard Rock Stadium. Some NFL observers believe the Dolphins front office wants to lose every game this season to secure the No. 1 pick in the 2020 NFL draft, scheduled for April 23-25 in Las Vegas.

It would appear to be a lock … but, then again, the Dallas Cowboys beating the New York Jets had that same appearance.

With the Jets and Redskins having left the winless ranks on Sunday, only the Cincinnati Bengals — at an even worse 0-6 following their 23-17 loss to the Baltimore Ravens — stand in the way.

Which means the Las Vegas party organizers should have some Skyline chili on hand.

Who will be on the clock when the regular season strikes zero? On Monday, ESPN reported that the Dolphins hold an 89 percent chance for the top pick. Cincinnati, with the second-highest chance, is at 6.7 percent.

Fortunately, this, too, might be decided on the field.

On Dec. 22 (Week 16), the Dolphins will host the Bengals at Hard Rock Stadium, where tickets can be bought for $13, according to Vivid Seats.

Admittedly, it’s a long way to three days before Christmas — despite what the displays in many retail outlets would have you believe. The Dolphins’ nine games to that fateful date appear to have chances for victory (two dates each with the Bills and Jets, plus one against the Giants), but all those teams have made adjustments to earn at least one win.

The Bengals could actually beat the Jacksonville Jaguars this coming Sunday. Otherwise, it might be smooth sailing to an 0-14 mark, also.

The edge at this time might be with the Bengals. While the Dolphins bounce between Josh Rosen and Ryan Fitzpatrick at QB, the Bengals have nine-year veteran Andy Dalton still calling the shots. But the Dolphins might be lucky to play this game in Miami instead of having to trudge to Cincinnati in late December.

Perhaps Dr. Who said it best: “To lose is to win, and he who wins shall lose.”