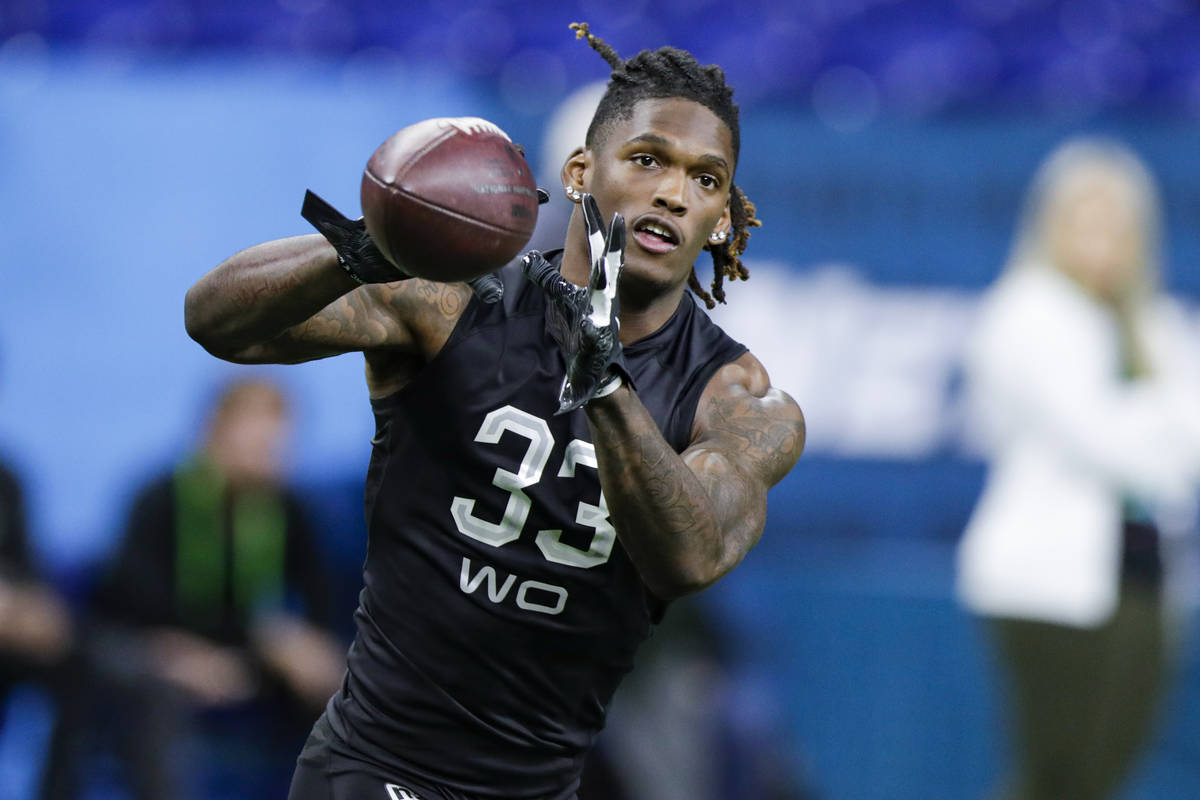 These are called mock drafts for a reason.

Endless hours of film study, research of team needs, reports from beat writers and national pundits are poured into the picks only until one unexpected trade flips the first round on its head.

It’s going to happen this year just like in any other. One industry veteran, Peter King, believes the mock drafts are going to be even further off than usual this year because Pro Days were shut down on March 12, eliminating a major source of information exchange.

There is also the great unknown of how the virtual draft will impact communication between teams and whether it could limit trades in any way.

But here it goes, anyway, our fifth and final version, including a notation in parentheses of where that player was slotted in our fourth mock draft.

At this point, it would be stunning if Burrow is not the choice at the top of the draft. The Bengals may still listen to offers, but they would have to be blown away.

Young is the best player in the draft and has the ability to completely transform a defense. They should probably consider a quarterback, but it’s risky to trade out of the spot if Young is as good as advertised.

The Lions will be soliciting offers for this pick from teams looking for a quarterback or even Okudah or Isaiah Simmons. But if they stay here, Okudah is too good at a prime position of need to pass up.

Gardner Minshew is a fun story. He’s not the answer. This is a bit of a stunner, but the Jaguars could use a marquee star who can develop as the face of a franchise. Tagovailoa could be a big international star when the team inevitably moves to London. Jacksonville, which has 12 picks in the draft, gives up the No. 9 and No. 42 selections to move up and grab him, placing potential above injury concerns.

There were reports out of Miami that the Dolphins are trying to move up to No. 3 to get Thomas. They won’t need to, especially because there is far from a consensus on him as the best tackle in the draft. He becomes the play with Tagovailoa off the board.

Sure, the Chargers want a quarterback. They also believe they can win this season with Tyrod Taylor under center. A tackle may make more sense in terms of filling a need, but Simmons has potential to be a superstar on the defensive side of the ball.

He wasn’t great at the combine, which works out well for the Panthers because he may otherwise not be on the board. If Simmons falls, Carolina will jump out of their virtual draft room to take him. Brown is the next man up.

The Cardinals went into the offseason needing a tackle and a wide receiver. Then they added DeAndre Hopkins. Wirfs is one of the available tackles who would help fill that hole. Developing QB Kyler Murray took 48 sacks as a rookie.

This trade couldn’t have worked out much better for the Giants. They pick up a second-round pick for moving down and still have a chance to select a player they may have been considering at No. 4.

Becton’s failed drug test didn’t help answer the questions about his passion for the game, but it’s rare to find a guy this big with this much athleticism. Plus, he’s the last of the elite group of tackles on the board.

The Jets need to find Sam Darnold some protection on the offensive line, but with four tackles off the board the next best option is to find him an elite weapon on the outside.

The Raiders would have a massive decision to make if both Jeudy and Lamb are on the board. They could also look to fast-rising C.J. Henderson to fill a need at cornerback and wait on receiver with a deep class of candidates. Lamb is too close to a sure thing and the best pure playmaker in the group.

It might not even be fair to give Kyle Shanahan’s offense a weapon like Ruggs, who compares favorably to Chiefs’ star Tyreek Hill. There may be some questions about his production and consistency, but the 49ers will find a way to get the most out of him.

The Bucs are in win-now mode, so an immediate starter at cornerback has to be tempting as they address their woeful pass defense. There’s little doubt they’d like one of the offensive tackles to fall. They could also trade down or grab the best player available, defensive tackle Javon Kinlaw.

The Jaguars trade up again to take advantage of Kinlaw’s fall down the draft board. Pairing him with Josh Allen along the defensive front will speed the rebuilding process on defense.

The Falcons appear to have their focus on Henderson, but settle for a potential impact pass-rusher with him off the board. Chaisson is well-suited to step into Vic Beasley’s role and will pair very well with Dante Fowler.

The Eagles don’t take any chances after watching the top three wide receivers come off the board, giving up a third- and a fourth-round pick to ensure they don’t miss out on Jefferson who backed up his incredibly productive season with a better-than-expected combine performance.

The Dolphins gambled, passing on a quarterback early and it pays off here. There are plenty of reasons to be skeptical of Herbert at No. 5, but those reasons are much easier to look past at No. 18. He could be gone when they pick at No. 5. He could also still be on the board here.

The Raiders don’t have a player at this spot they absolutely must have and there’s no secret how much Mike Mayock likes picks in the second and third rounds. He finds a willing partner here in a Saints team that moves up five spots to take a Louisiana native who fills a hole on a team that needs a playmaking linebacker.

Mims was a star at the Senior Bowl and scouting combine after the 6-foot-3, 206-pounder ran a 4.38 in the 40-yard dash and an impressive 6.66 seconds in the three-cone drill, the best of any receiver. With this move, Denver gets a potential star at their biggest position of need and picks up an extra pick from the Jaguars in the process.

The Cowboys also play the trade-down game well and grab a player they could have considered at No. 17 while picking up additional draft capital. The film suggests Epenesa should be considered early, but his mediocre measurables could make him a steal at this point in the first round.

Cornerback and wide receiver are the biggest areas of need for the Vikings, who have two of the next four picks and the ability to address both needs. They go defense first here, picking Gladney over Trevon Diggs, who happens to be the younger brother of Stefon Diggs, who the Vikings traded to Buffalo to acquire this pick.

The Patriots are looking for a franchise quarterback for the first time in two decades. There are plenty of question marks about Love, but there aren’t many questions about his ceiling. Pairing him with Bill Belichick could just be fun more than anything else.

Xavier McKinney comes from an elite college program, a pedigree Mayock and Jon Gruden have shown they prefer. The Raiders are stockpiling young talent in the secondary and will just figure it all out later. McKinney is a great leader and very good in coverage, even playing some nickel corner in college.

The Diggs trade gave the Vikings an extra first-round pick, but left a gaping hole at wide receiver. Reagor, the son of an eight-year NFL defensive linemen, is explosive with the ball in his hands. Minnesota will find ways to utilize him in the running game and on screens.

Their running game issues were probably more about the offensive line, but Swift is the best player on the board here. By taking him in the first round instead of the second, they can get that extra fifth-year option on the first contract.

No change here as Seattle finds help for its lackluster pass rush in a player who also has the ability to impact the game on early downs.

He projects as a prototypical middle linebacker, which would fill an immediate role for the Ravens. People around the Oklahoma program rave about his character, though the Ravens will be more interested that he combines the toughness required of the position with high-end athleticism.

The Titans are expected to address needs on defense or offensive tackle and they will have several options. Cornerback is a definite area of need after allowing Logan Ryan to hit the market, though he remains unsigned. Terrell may have slipped a bit after a tough national championship game, but he has good size and high-end speed.

There may be reason to question his dominance due to the competition in the AAC. But that wouldn’t explain the way he stood out against elite competition at the Senior Bowl. Jones needs to add some good weight and is still a bit raw. Still, he has the potential to be a star.

There’s not much debate about Ruiz being the top interior line talent in this draft. He makes sense for a few teams, especially with the versatility to play guard or center. The 49ers, who are in a unique position of having two first-round picks after appearing in the Super Bowl, are one of those teams.

There seems to be an inordinate amount of noise connecting the Bears to Diggs, which is odd enough that it might not even be the usual pre-draft smokescreen. Kansas City seems to be shopping the pick, and the Bears have two second-round picks, so they have the capital to make this work if he’s really their guy.