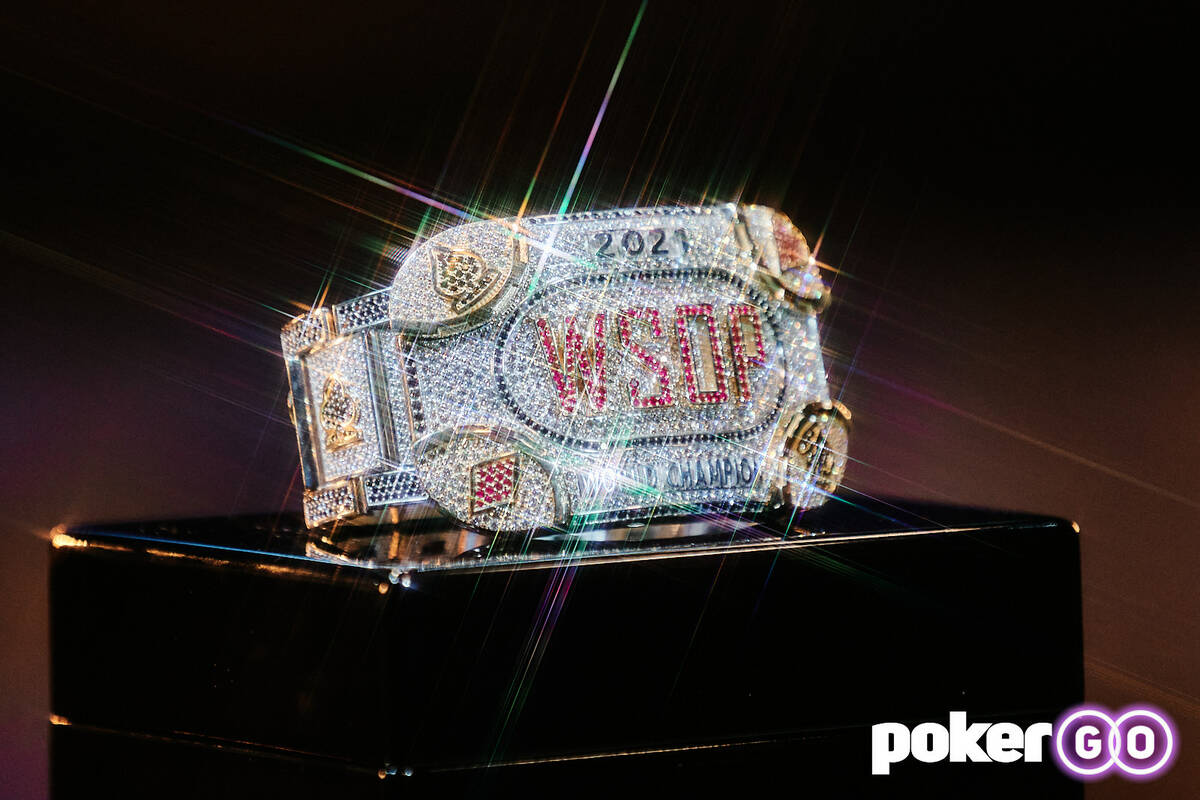 The bracelet that will be awarded to the World Series of Poker Main Event champion. (Enrique Malfavon/PokerGO) 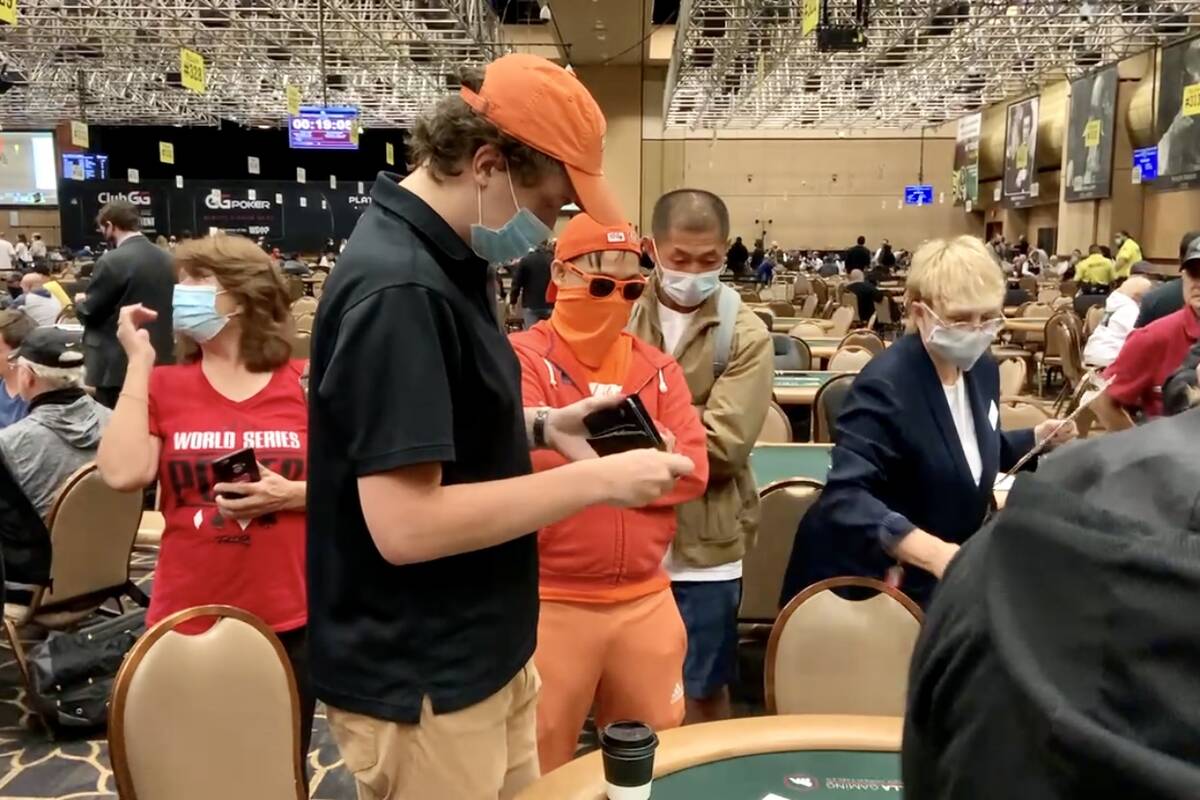 Ryan Christopherson after winning a $2,060 one-hand satellite to get into the World Series of Poker Main Event on Wednesday, Nov. 10, 2021, at the Rio. (Jim Barnes/Las Vegas Review-Journal) 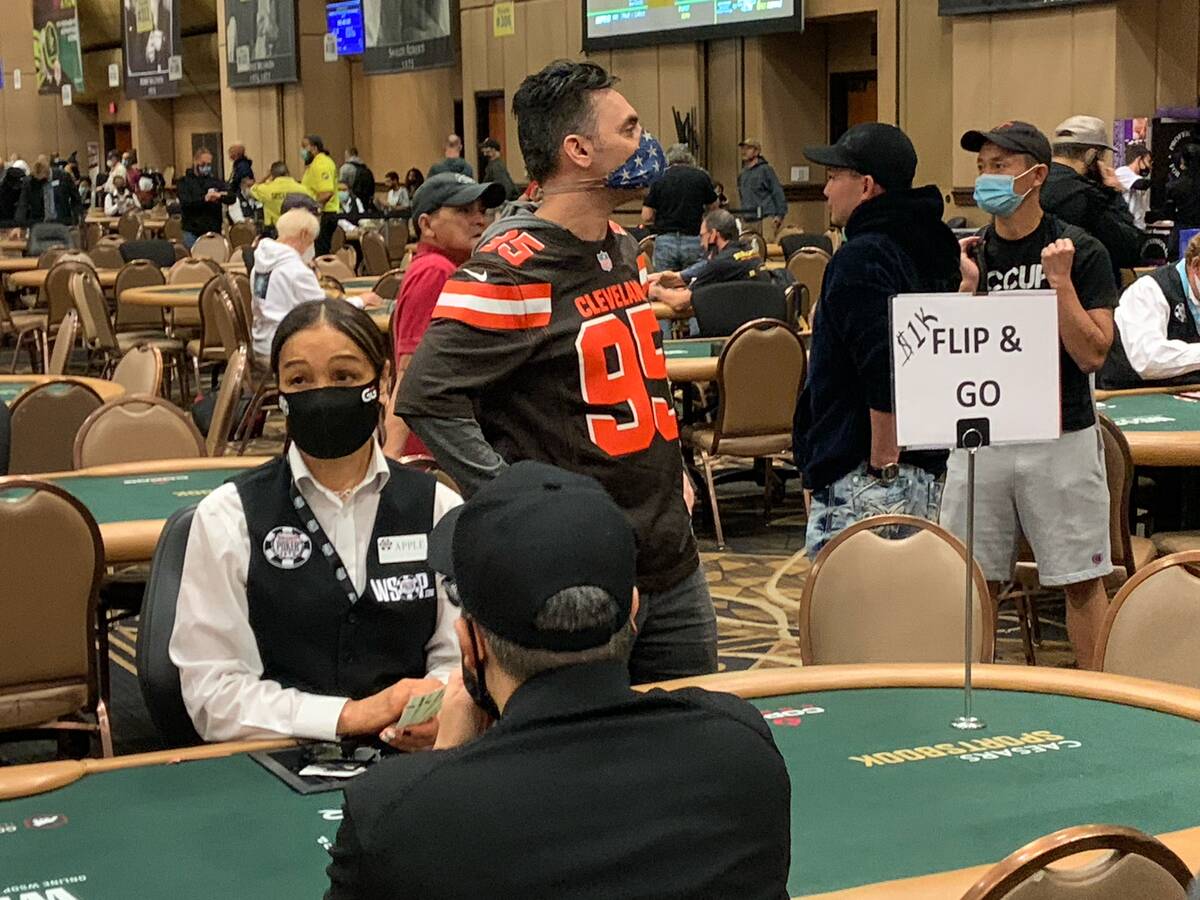 Players wait to start a last-minute satellite to get into the World Series of Poker Main Event on Wednesday, Nov. 10, 2021, at the Rio. (Jim Barnes/Las Vegas Review-Journal)

Thousands of players are fighting to be the last one standing in the World Series of Poker Main Event.

Ryan Christopherson has the distinction of being the last one to sit down.

Christopherson stretched late registration at the Main Event to its limits Wednesday afternoon, winning a $2,060 one-hand satellite with four other players right before the entry deadline on Day 2.

“Probably would have been smarter just to buy in and get in at the start, but I like to gamble,” Christopherson, of Spokane, Washington, said with a laugh.

The field is down 22 percent from the last live Main Event in 2019, but that field of 8,569 was the second-largest in WSOP history. Hossein Ensan prevailed to win $10 million.

The live WSOP was not held last year because of the coronavirus pandemic. Damian Salas won a hybrid online/live Main Event, beating a field of 1,379 entries for $2.55 million.

This year’s WSOP is being held under a vaccine mandate, and the U.S. did not loosen international travel restrictions until Monday.

Christopherson was competing with a few others in the satellite area to get into the Main Event field at the last second. They intended to play a one-hand $1,030 satellite, but couldn’t find enough takers. With time running out, they agreed to double the buy-in and play five-handed for $2,060.

The players received their cards, and the dealer laid out a flop, turn and river with a jack as the highest card. The players decided to reveal their hole cards one at a time. Christopherson went second and rolled over a jack, and no one could beat it. (His other card, which turned out to be irrelevant, was a king.)

A WSOP official standing by said, “Last man in!” He gave Christopherson 10,000 in tournament buy-in chips, then escorted him to the registration area.

The Main Event was finishing the second of two Day 2 sessions Wednesday.

Phil Hellmuth, the all-time leader with 16 WSOP bracelets, had 119,600 chips at the dinner break. (The WSOP awards trophy bracelets for tournament victories.)

All of the remaining field will play together for the first time on Day 3 on Thursday. The players are expected to reach the money Friday.