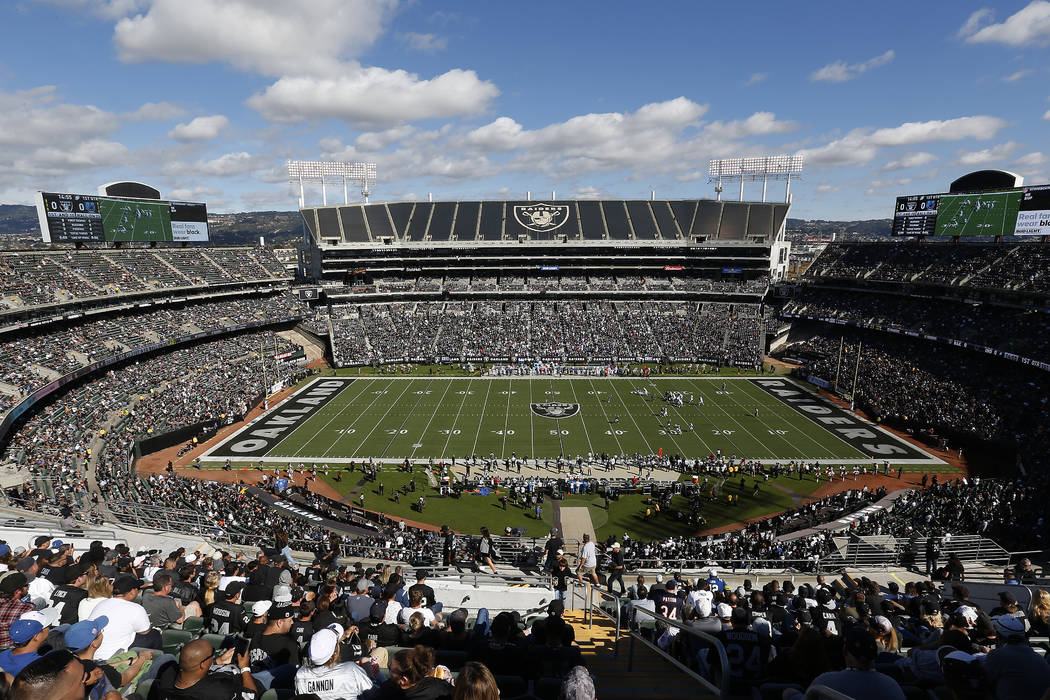 Fans at Oakland Alameda County Coliseum watch from a general view during the first half of an NFL football game between the Oakland Raiders and the Indianapolis Colts in Oakland, Calif., Sunday, Oct. 28, 2018. (AP Photo/D. Ross Cameron) 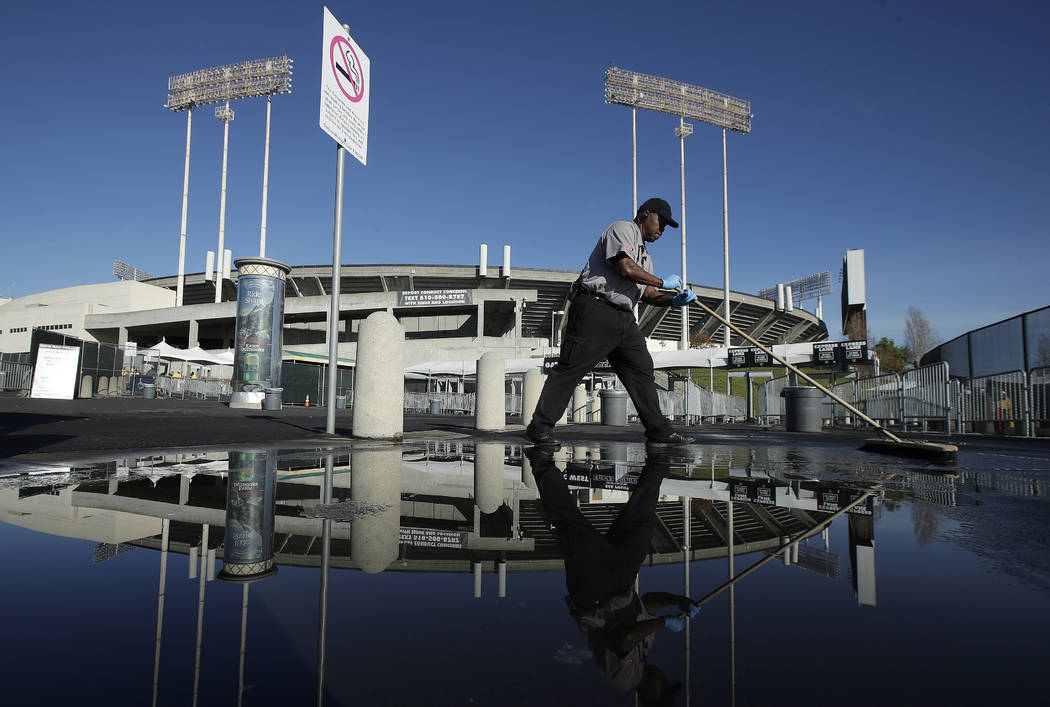 A worker cleans a puddle outside of Oakland Alameda County Coliseum before an NFL football game between the Oakland Raiders and the Kansas City Chiefs in Oakland, Calif., Sunday, Dec. 2, 2018. (AP Photo/Jeff Chiu)

A lawsuit against the Raiders filed Tuesday by the city of Oakland won’t stop the team from relocating to Las Vegas.

The federal antitrust and breach of contract lawsuit against the team, the National Football League and the NFL’s 31 other teams calls the Raiders’ move to Las Vegas “illegal” while seeking to recover financial damages lost as a result of the scheduled 2020 relocation.

Because damages can be tripled in an antitrust action, they could total hundreds of millions of dollars.

Steve Hill, chairman of the Las Vegas Stadium Authority, said late Tuesday that the seven-count, 353-page lawsuit filed in U.S. District Court for the Northern District of California wouldn’t affect the team’s move to Southern Nevada. Neither is it expected to slow construction of the 65,000-seat, $1.8 billion indoor stadium being built at Interstate 15 and Russell Road west of Mandalay Bay and the Strip.

But Oakland’s strategy is built on recovering money Oakland taxpayers invested in the Raiders and other costs to help pay off approximately $80 million in debt remaining from renovations to the Oakland-Alameda County Coliseum where the Raiders now play.

“The defendants brazenly violated federal antitrust law and the league’s own policies when they boycotted Oakland as a host city,” city attorney Barbara J. Parker said in the statement. “The Raiders’ illegal move lines the pockets of NFL owners and sticks Oakland, its residents, taxpayers and dedicated fans with the bill. The purpose of this lawsuit is to hold the defendants accountable and help to compensate Oakland for the damages the defendants’ unlawful actions have caused and will cause to the people of Oakland.”

Parker’s filing was approved in a July 24 City Council meeting. Effectively, the Raiders appear increasingly less likely to play their home games in Oakland next season.

Such has been the organization’s position if the antitrust lawsuit was filed. The club’s lease at the Coliseum is set to expire in 2019.

For months, the Raiders have developed contingency sites in the event their lease is not extended. Clark County Commission Chairman Steve Sisolak, who has since been elected governor of Nevada, has said it would be too costly to renovate Sam Boyd Stadium in Las Vegas to make it playable for NFL football.

The team’s only remaining home game this season could be the franchise’s last in Oakland. On Dec. 24, the Raiders will face the Denver Broncos on “Monday Night Football.”

Two legal experts indicated they were perplexed with the city’s strategy of filing an antitrust action.

Stephen F. Ross, a professor of law at Penn State University, said no city has ever won an antitrust action against the NFL and that it’s clear the city isn’t trying to keep the Raiders in Oakland.

“I don’t really have any expertise in why they’re doing what they’re doing. I think those are strategic questions that you would have to be an expert in Oakland politics to know and I’m an expert in sports and antitrust law,” Ross said late Tuesday. “They’re obviously trying to recover money. Why isn’t keeping the team in Oakland among the remedies? I don’t know.”

A representative of Oakland’s legal team did not return email inquiries about why they weren’t fighting to keep the team in Oakland and why the lawsuit names all 32 NFL franchises.

“But the solution is money damages rather than what we typically do in those situations, which is break up the monopoly,” he said. If Standard Oil is charging too much for oil, typically the way to solve the problem is to break them up into Standard, Texaco, Exxon and Mobil, and then the price would go down.”

John Wolohan, a Syracuse University law professor, noted the irony that the city of Oakland is attempting to take action the same way former Raiders owner Al Davis did when moving his team from Oakland to Los Angeles in 1982.

“Typically, these kinds of actions have never been filed by cities,” Wolohan said. “I can see the breach of contract, but it’s hard to see the antitrust.”

Oakland doesn’t appear to be making any attempt to preserve the Raiders legacy in Oakland, he said. In 1996, the Cleveland Browns relocated to Baltimore, and the team, the city of Cleveland and the NFL approved a compromise enabling Cleveland to keep its colors and trademarks, and the new team in Baltimore became the Ravens.

“It was like, ‘Fine, you can go. You can pay your way out of Cleveland, but you’re leaving your colors and you’re leaving the history,’” Wolohan said of the settlement.

While he doesn’t believe the antitrust action has merit, Penn State’s Ross said he finds it interesting that Jim Quinn, the lead attorney for Berg & Androphy, is working the case pro bono and will only be paid if the lawsuit is successful.

Ross said he doesn’t believe Oakland has any standing in intervening in NFL relocation rules and that the move to Las Vegas was a matter of the Raiders trying hard to get a deal in Oakland and finally being wooed to Nevada.

“The bottom line is they admit that, whatever the process and however sleazy they claim Mark Davis is, the city of Oakland was not willing to pay what the state of Nevada was willing to pay,” Ross said. “They just got outbid. You could argue that there shouldn’t be a bidding war. In Europe, it is illegal for states to bid against each other with tax benefits in order to get business. But that’s not our practice here.”