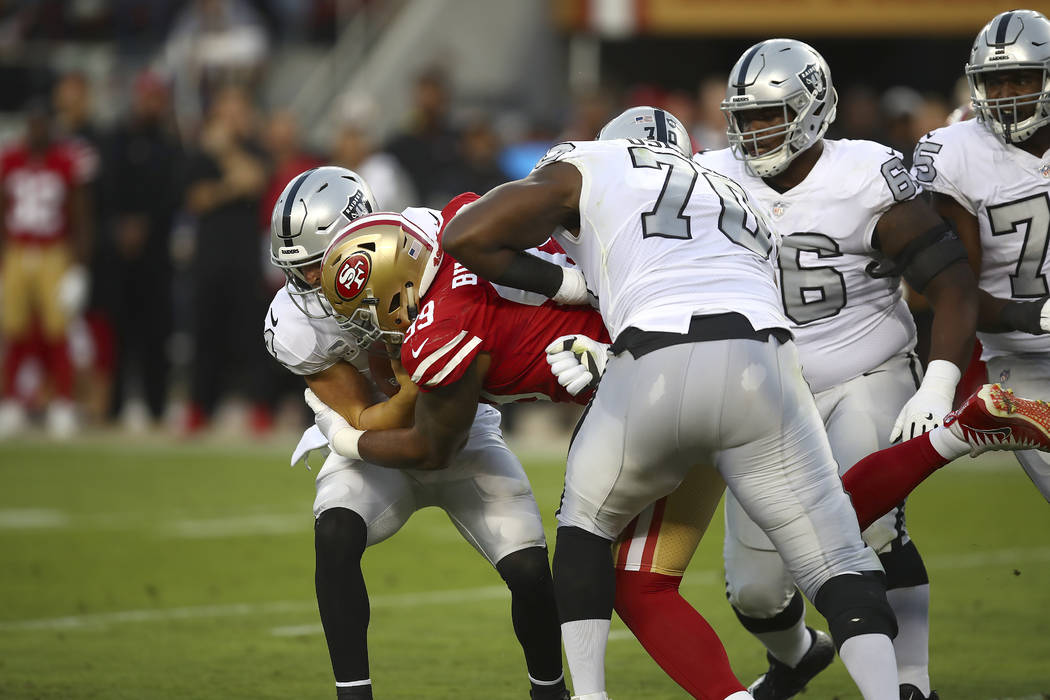 Anyone recognize this Raiders team?

Anyone know the starting lineup in the secondary?

Anyone got a fast-forward button?

It’s only been eight games and the Raiders’ roster looks drastically different in Week 10 than it did on Sept. 1 before Khalil Mack was traded to the Chicago Bears.

Bruce Irvin was the latest Raiders veteran to be sent packing. He’s now playing for his hometown Atlanta Falcons while the 1-7 Raiders still have eight games to go in a lost season.

It’s gotten to the point where Raiders fans actually want the team to finish 1-15 to make sure they get that No. 1 pick in April’s NFL draft. Even that is not a guarantee with the New York Giants also stuck at one win and currently owning the tiebreaker for the top pick.

“1-15 is the goal,” Alex Chisholm commented on Facebook. “Losing to the Niners was also a goal. (Ohio State defensive end) Nick Bosa is the main goal. This tanking business is so interesting.”

Very interesting, especially with the Raiders having three first-round picks. But losing to the Niners was a goal? Times sure are rough.

I think the whole country remembers the third-string 49ers quarterback’s name after Thursday.

No one saw that debut performance coming from Mullens. Not even, Alonso. Mullens torched the Raiders for three touchdowns in a 34-3 victory on “Thursday Night Football.”

On a side note, Alonso and many other Niners fans screamed at me for ranking their beloved team last in my weekly NFL rankings. I wasn’t wrong. With C.J. Beathard, the 49ers lost to the lowly Cardinals twice.

But Mullens’ magic got them to 29th in this week’s rankings. Keep starting that guy. Mullens was either that good or the Raiders’ defense was that bad. It’s probably the latter.

This is true. The Raiders rolled over against the 49ers, but no one was at Levi’s Stadium to receive a refund.

Red empty seats were visible for four quarters, so the stuck in traffic excuse doesn’t fly.

The atmosphere was much better in the parking lot before the game. The two Bay Area fan bases came together in a peaceful manner to send the Raiders off to Southern Nevada.

“The Raiders will be developed into a boring, albeit successful, team.” — K Hays (Email)

Gotta give K Hays credit for staying positive during these hard times. He’s like that cartoon dog sitting in a burning room and saying to himself, “This is fine.”

And why settle for successful and boring? That recipe often translates to wild-card-and-out.

The Redskins are 5-3 and lead the NFC East, but no one is taking them seriously because they’re a slow-it-down, run-heavy offense. Boring doesn’t cut it in 2018.

Hopefully for Raiders fans, Jon Gruden won’t settle for the Cowboys’ mediocre, boring blueprint. You know, if he’s ever successful.