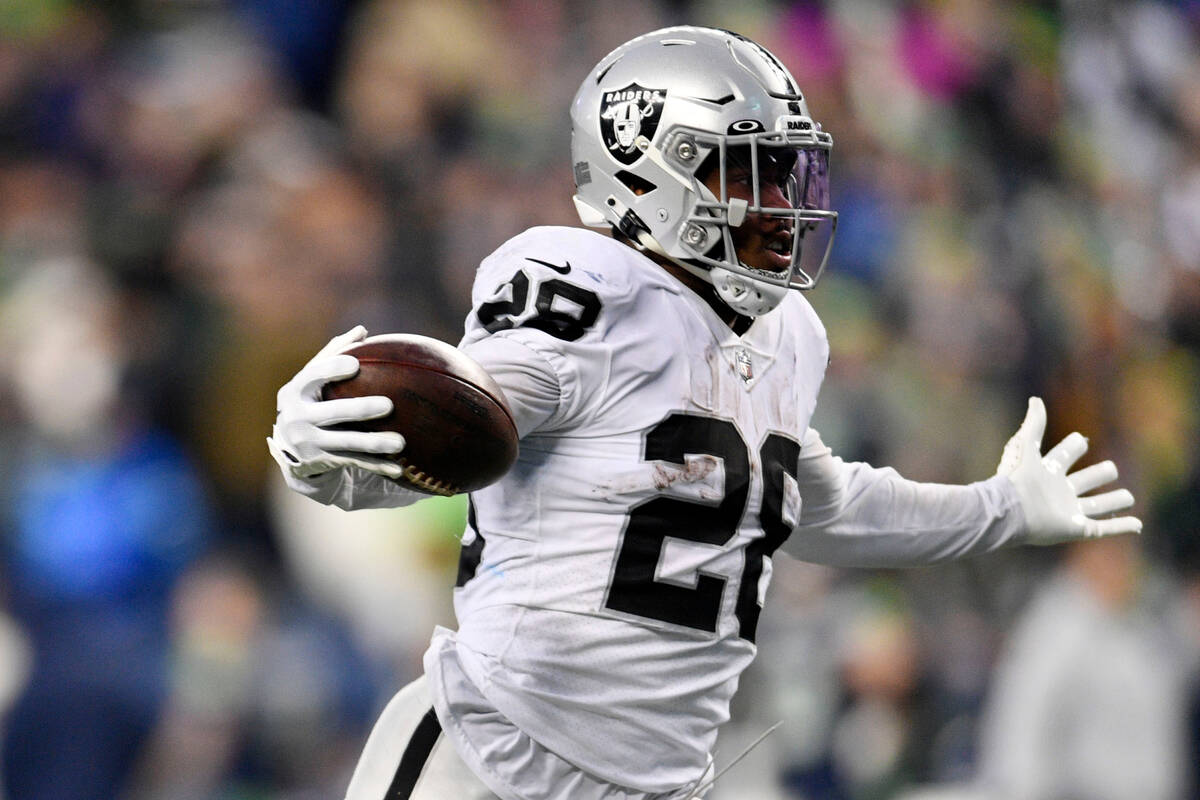 Las Vegas Raiders running back Josh Jacobs (28) celebrates as he scores the game-winning touchdown during overtime of an NFL football game against the Seattle Seahawks Sunday, Nov. 27, 2022, in Seattle. (AP Photo/Caean Couto) 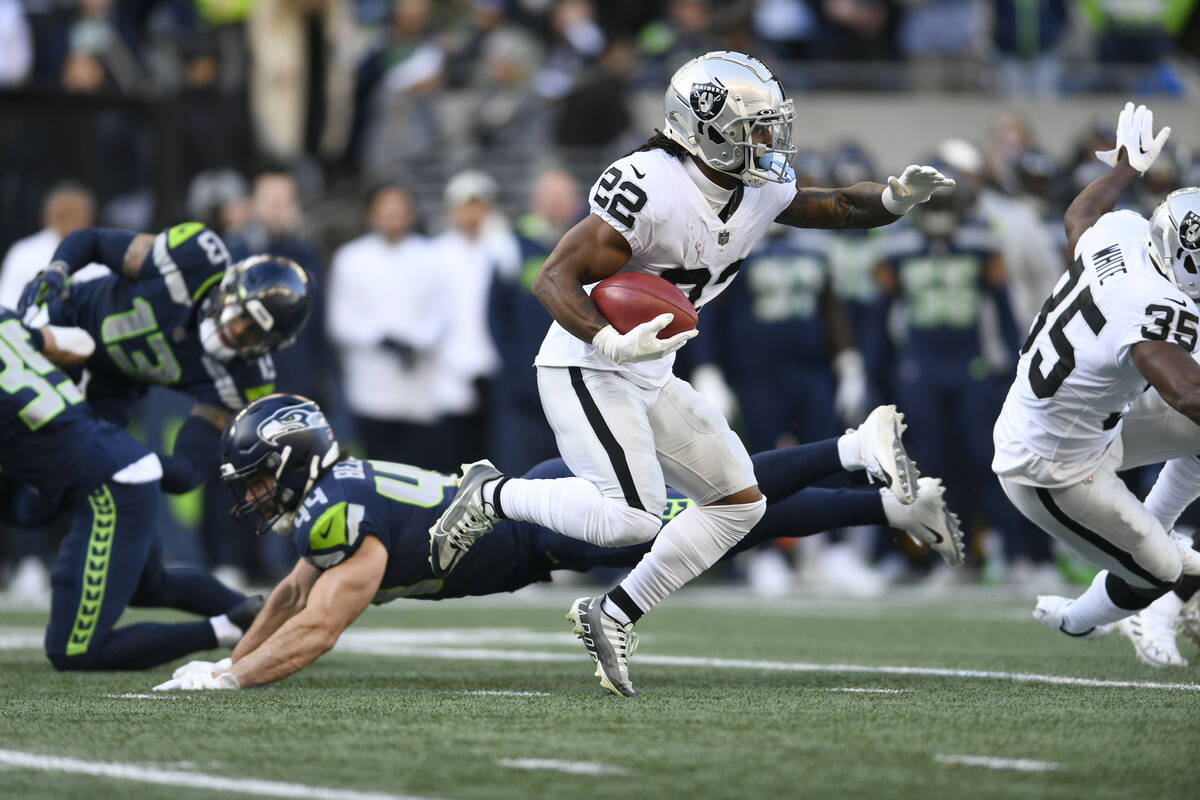 Las Vegas Raiders running back Ameer Abdullah carries against the Seattle Seahawks during the first half of an NFL football game Sunday, Nov. 27, 2022, in Seattle. (AP Photo/Caean Couto) 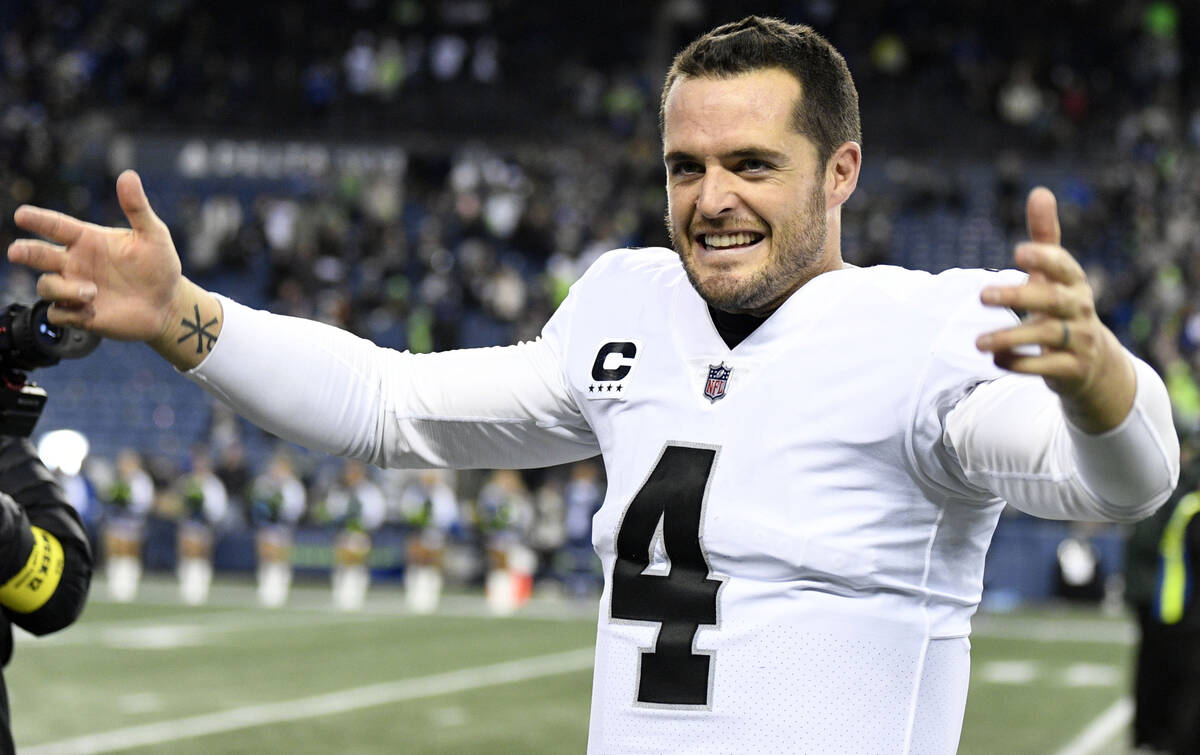 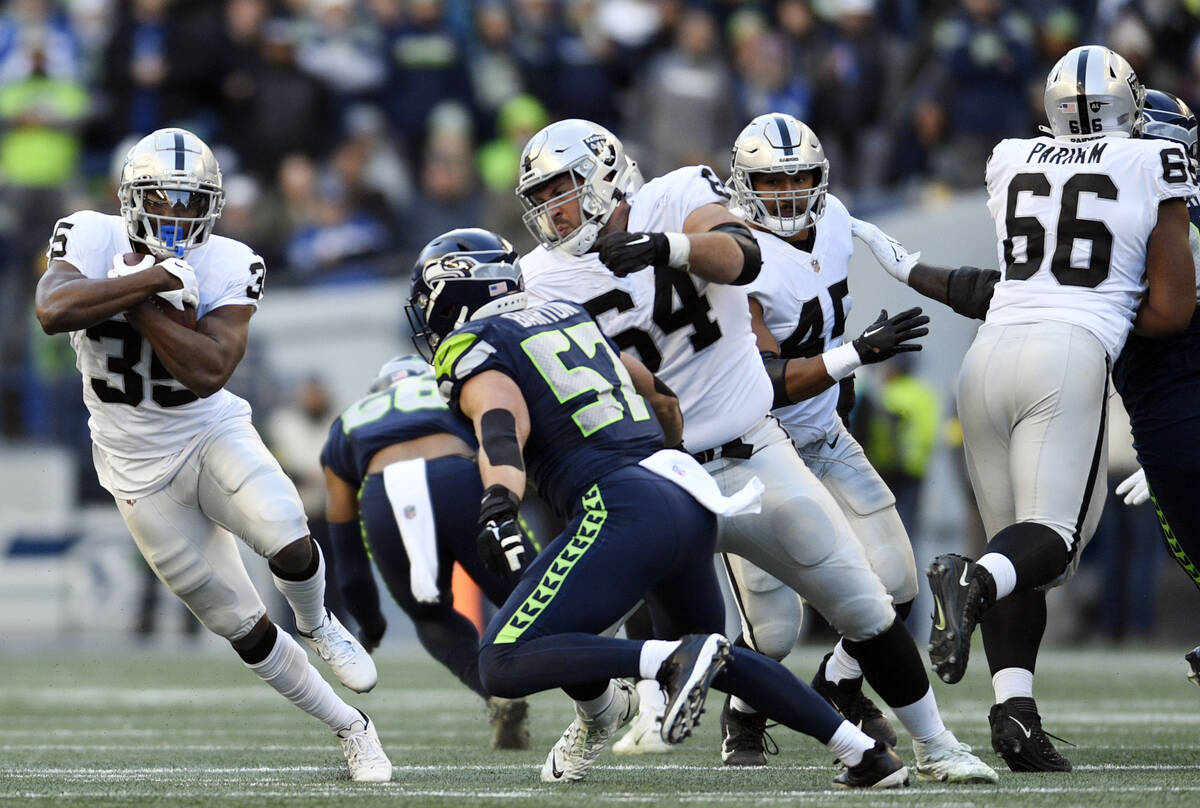 Las Vegas Raiders running back Zamir White (35) carries against the Seattle Seahawks during the second half of an NFL football game Sunday, Nov. 27, 2022, in Seattle. (AP Photo/Caean Couto) 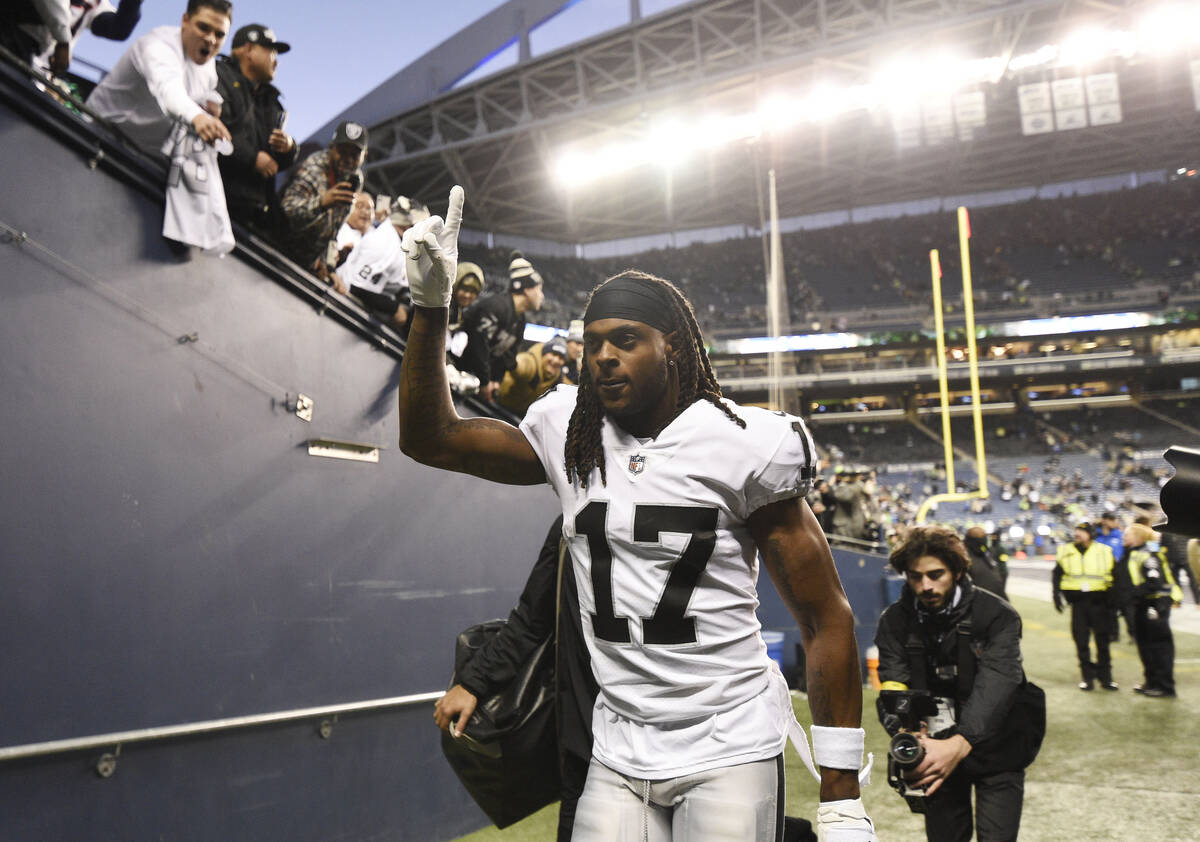 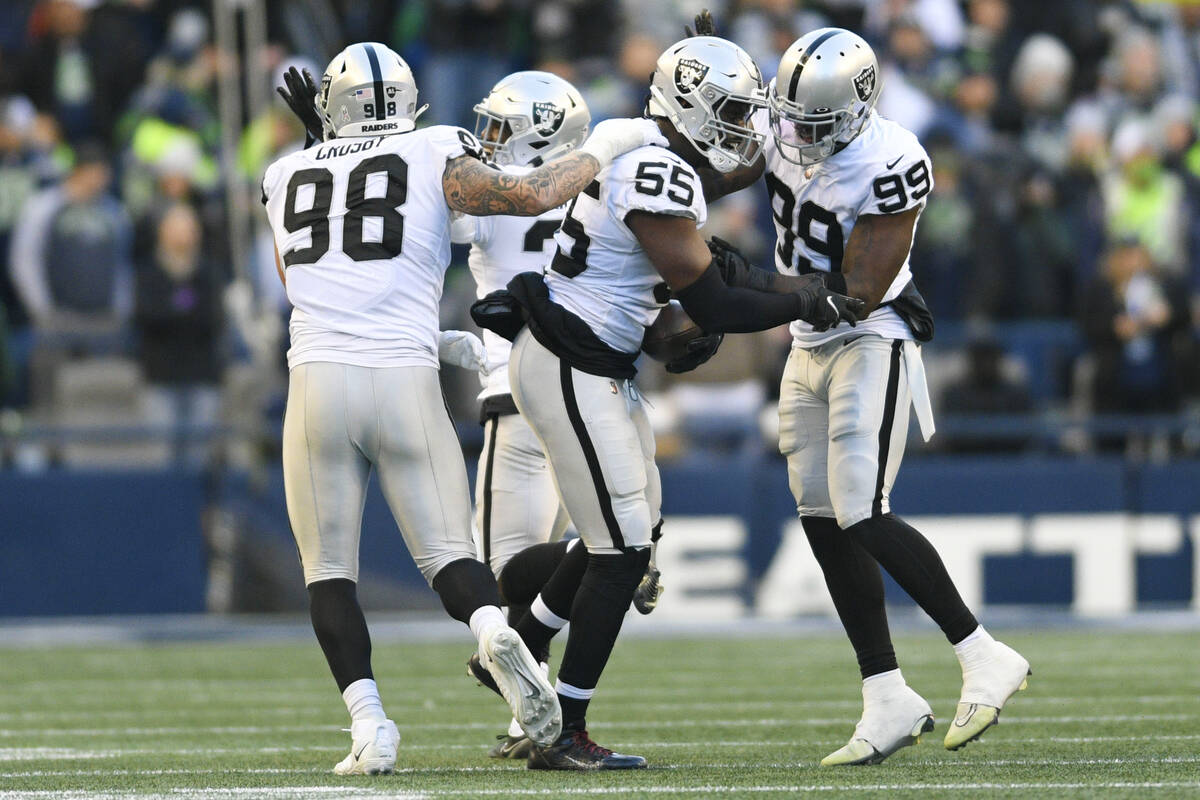 Las Vegas Raiders defensive end Chandler Jones (55) recovers a fumble during the second half of an NFL football game against the Seattle Seahawks Sunday, Nov. 27, 2022, in Seattle. (AP Photo/Caean Couto)

Three takeaways from the Raiders’ 40-34 overtime victory over the Seahawks on Sunday at Lumen Field in Seattle:

For the second consecutive week, the Raiders put together a game-tying drive late in the fourth quarter before winning with a touchdown in overtime.

Josh Jacobs found a seam and raced 86 yards for a touchdown on the second possession of overtime to give the Raiders the dramatic victory.

The Raiders won an overtime game at Denver last week and are 4-7 with two consecutive victories for the first time this season.

Derek Carr threw for 295 yards and three touchdowns against the Seahawks.

After the Raiders missed a 56-yard field-goal attempt on the first possession of overtime, Maxx Crosby forced an incompletion by Geno Smith on third down near midfield.

Jacobs went right up the middle on the next play, following a lead block from fullback Johnson and racing to the end zone.

The Raiders trailed 34-27 late in the fourth quarter until Carr led a 75-yard drive that culminated in a 5-yard touchdown pass to Foster Moreau with 1:54 to play. Crosby sacked Smith on a third-down play on the ensuing drive to essentially force overtime.

While punter AJ Cole lost another coin toss to fall to 1-10 on pregame, he came through for a second straight week by winning the toss at the start of overtime and getting the Raiders the first possession.

The Raiders racked up 576 yards of offense and forced two turnovers.

They will put their winning streak on the line against the Chargers on Sunday at Allegiant Stadium. The Raiders opened as 2½-point underdogs at the Westgate SuperBook.

Jacobs was having a huge game before the winning touchdown.

He ran for 229 yards and two touchdowns on 33 carries while also having his best day of the season in the passing game.

Jacobs caught six passes for 74 yards, including a one-handed snag with his left hand to pick up a big gain in the second half.

His efforts pushed him over 1,000 yards rushing this season, the third time he has reached the milestone in four years with the Raiders.

He joined Marcus Allen and Mark van Eeghen as the only players in franchise history to record three such seasons with the Raiders.

Jacobs became just the fourth player to record at least 300 yards from scrimmage and score two touchdowns in a game in the modern era of the NFL and the first since Adrian Peterson in 2007. The 303 yards are a franchise record.

The 86-yard touchdown was the fourth-longest play from scrimmage in overtime in league history.

A first half that started as poorly as possible turned productive for the Raiders.

Carr was intercepted on the first snap of the game as he tried to throw over the middle to Adams.

The Seahawks turned the miscue into points two plays later to take a 7-0 lead, but the Raiders bounced back.

Carr responded with a touchdown drive and led the offense to 24 points before halftime. It was the third-highest scoring first half for the franchise in the past 20 years and the most since they had 24 against the Chiefs in 2020.

They racked up 12 first downs and 230 yards of offense in the half, as Carr threw for 150 yards and two touchdowns.

The Raiders went 5-for-7 on third down in the half but committed two turnovers.

5
Raiders rank among most popular in merchandise sales