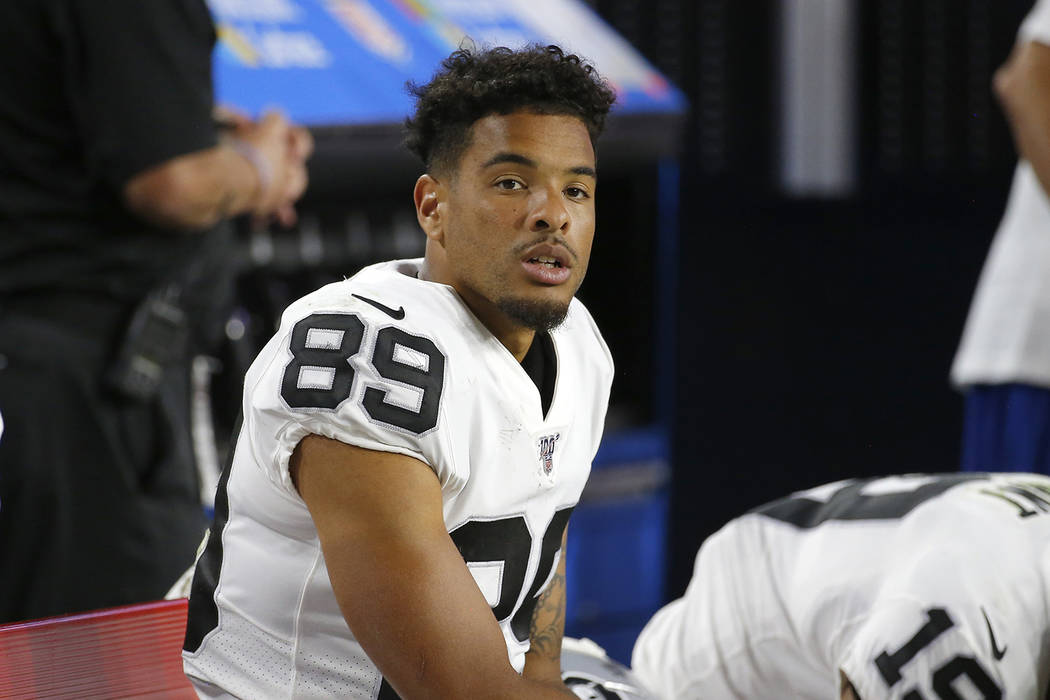 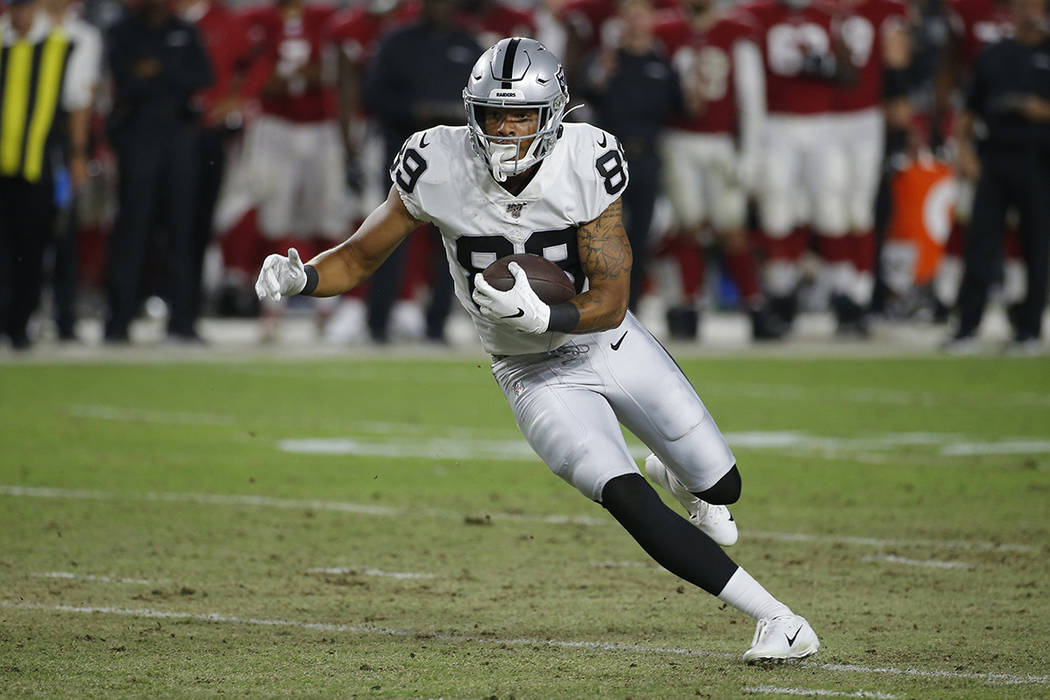 In this Aug. 15, 2019, file photo, Oakland Raiders wide receiver Keelan Doss (89) runs with the ball during an an NFL preseason football game against the Arizona Cardinals in Glendale, Ariz. (AP Photo/Rick Scuteri, File)

ALAMEDA, Calif. — Four undrafted rookie free agents were included on the Raiders initial 53-man roster Saturday as the team made a clear decision to get younger and more athletic.

The UC Davis alum and Alameda native was released by the team as one of 24 transactions that got the initial roster down to 53 ahead of the 1 p.m. deadline, though general manager Mike Mayock told reporters in a conference call there is still work to be done.

“I’m not sure we’re done at a bunch of different places on the roster,” he said. “There’s still more to come.”

The Raiders are fourth on the waivers priority list and have up until 9 a.m. Sunday to make claims on players released by other teams.

For now, they have 35 players who weren’t on the initial 53-man roster a year ago, including 12 rookies.

Cole won the job earlier in camp when incumbent Johnny Townsend was released.

“We’re real excited about those four guys, and the big picture is there’s a lot of transition with this roster, underscoring youth, athletic ability and size,” Mayock said.

Doss and imposing defensive tackle Anthony Rush came up short in their bid to expand that list to six. Doss was heavily featured on the HBO reality show documenting training camp and led the Raiders in the preseason with 17 catches and 162 yards, including a touchdown against the Rams.

He was a fan favorite and drew frequent praise from coach Jon Gruden for his ability to make plays.

“It’s pretty obvious that we went with a veteran group there,” Mayock said of the six receivers. “I have strong feelings for Keelan Doss. I thought he did a great job. Local kid. Great story. That was a very difficult cut.

“There still could be some more movement at that position, but we really like how we line up Week 1.”

Doss is a prime candidate for the practice squad should no other team claim him off waivers.

It’s likely the team also holds out hope to use another spot on the practice squad for Rush, who entered camp late following his release from the Eagles. He made a big impression during the preseason.

Rush made a strong push for the roster among a defensive tackle group that became even more crowded when the team added veteran Corey Liuget last week.

“We really liked him,” Mayock said of Rush. “At the end of the day, he’s very raw. He’s a guy that I think has a future in the league, but today was not his day.”

One position that saw no players cut before the deadline was quarterback. The Raiders elected to keep both Mike Glennon and Nathan Peterman behind starter Derek Carr.

While a third quarterback is often considered a luxury in today’s NFL, Mayock said it was part of the team’s plan.

“When you work with Jon Gruden, it probably is,” he joked. “Bottom line, Jon loves his quarterbacks, does a great job developing them and I think we pretty much knew all along — especially if all three of them played the way they did — it became obvious that we were going to go with three.”

That’s just one less than the number of linebackers on the roster. The Raiders released Las Vegas native Brandon Marshall on Friday and then parted ways with Jason Cabinda, Koa Farmer, Te’Von Coney and Kyle Wilber on Saturday.

Marshall may have been the biggest surprise, but Mayock said the proliferation of spread offenses dictates that if a team carries five linebackers, the fourth and fifth guys must be adept special teamers.

He didn’t see that as a role for Marshall, a former Cimarron-Memorial and UNR standout.

His release was part of a plan to get younger as the Raiders kept eight of their nine draft picks. The lone exception was seventh-round pick Quinton Bell, who is still learning to play defensive end after playing wide receiver for much of his collegiate career.