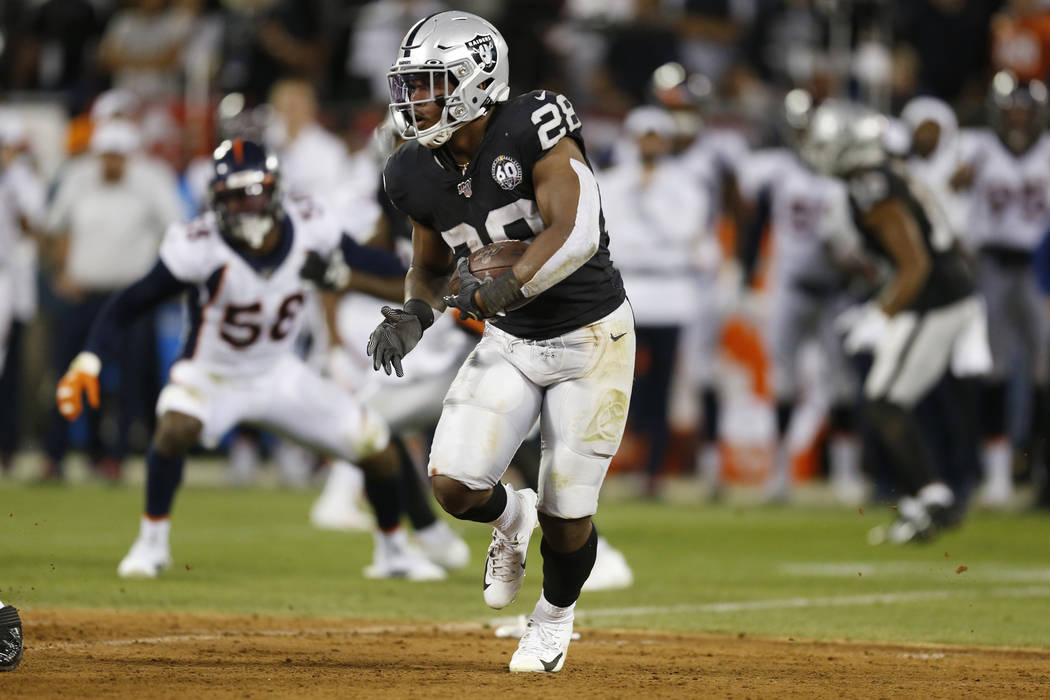 Oakland Raiders running back Josh Jacobs runs with the ball during the first half of an NFL football game against the Denver Broncos Monday, Sept. 9, 2019, in Oakland, Calif. (AP Photo/D. Ross Cameron)

ALAMEDA, Calif. — Sunday’s game between the Raiders and Kansas City Chiefs is a finale of sorts. It will be the last appearance Chiefs coach Andy Reid will make at the Oakland-Alameda Coliseum. It also is, in all likelihood, the last time an NFL game will be played on dirt from a baseball infield.

The Coliseum opened in 1966, and the Raiders and Oakland Athletics have shared the facility for most of its history — with the exception of the Raiders’ stint in Los Angeles from 1982-1994. The stadium is notorious for its many problems, but on a conference call with Raiders media, Reid said it still carries a certain nostalgic charm.

“Last year the sewage system flooded and you have to go play. It simplifies the game for you — you’ve got to work through a few things to get out there,” Reid said with a laugh. “And the baseball infield, these guys can tell their grandkids that, you know what, they used to play baseball and during baseball season, we’d go out and play on the dirt — literally. And I think there’s something to that.”

Raiders coach Jon Gruden had his tongue firmly in his cheek when he told reporters on Wednesday that his team loves playing on the Coliseum dirt.

“I like the old elements of football,” Gruden said. “I’ve been accused of being old school. I know a lot of friends just like me who like watching a football game on the dirt.”

Rookie running back Josh Jacobs said he knew when he got to the Raiders he’d be playing on a dirt field for a portion of his rookie year. But even so, there are difficulties that come with being a ball carrier on the infield. Jacobs said it does affect the way he cuts.

The dirt infield “rips jerseys — it literally goes through anything. So I mean, you leave the game with a lot of scratches and stuff like that,” Jacobs said.

Asked how it felt to be tackled on it, Jacobs paused, gave a knowing look and laughed before giving his answer.

“I was telling people — the ground hurt more than the tackles did,” Jacobs said.

Nostalgic charm or not, players and coaches will likely appreciate the state-of-the-art Allegiant Stadium when it opens in Las Vegas next year. It’ll certainly be better than dealing with spilled sewage.

But for this week, that’s simply a vision for the future.

“It’s going to be pretty neat,” Gruden said, “Chiefs-Raiders on the dirt, one more time.”

Raiders starting cornerback Gareon Conley left the field on a stretcher Monday night, but he was back on the practice field Wednesday morning.

“He did just about everything, and that’s really great news for us,” Gruden said.

Conley (neck) was listed as limited on the Raiders’ Wednesday injury report, as was defensive tackle Corey Liuget (knee).