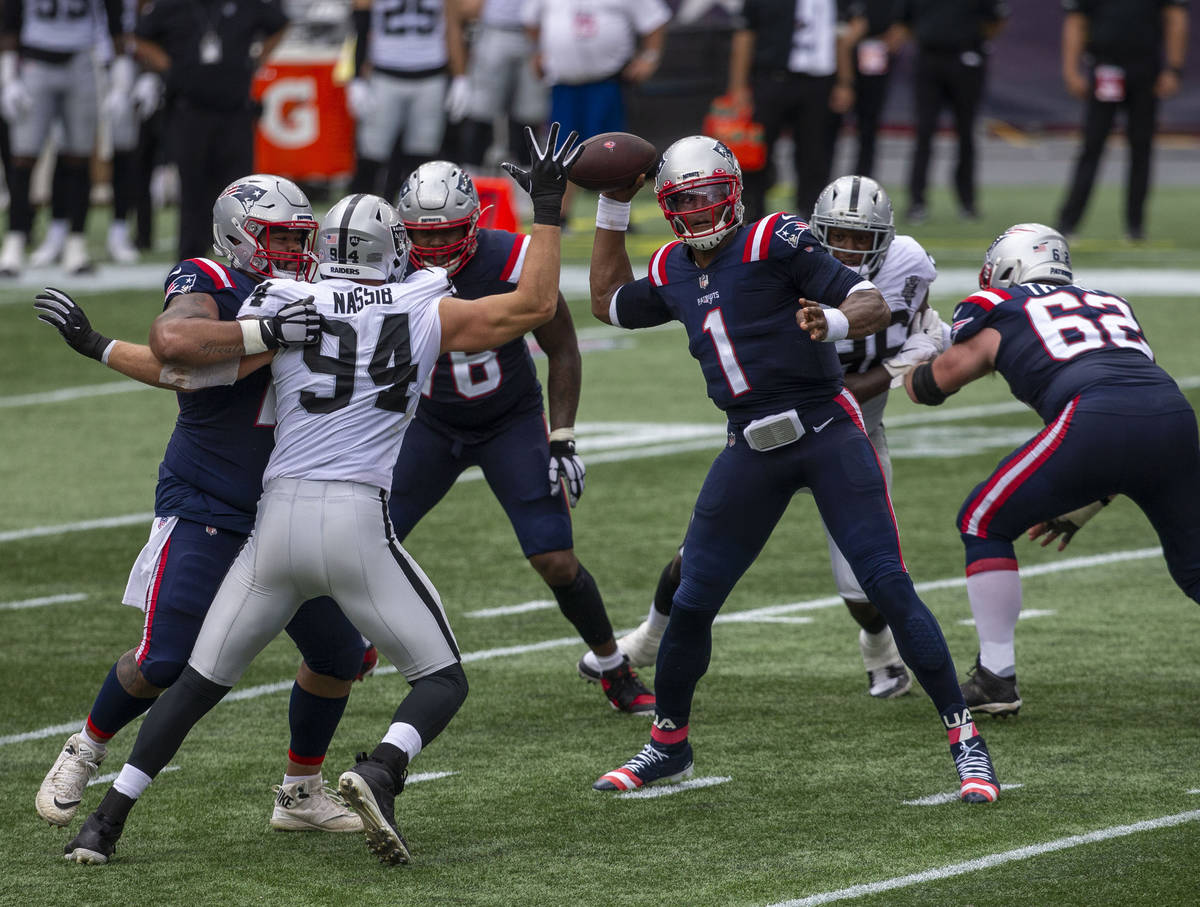 Las Vegas Raiders defensive end Carl Nassib (94) reaches out to get a hand on a pass thrown by New England Patriots quarterback Cam Newton (1) in the first half of an NFL football game on Sunday, Sept. 27, 2020, at Gillette Stadium in Foxborough, Mass. (Heidi Fang/Las Vegas Review-Journal) @Heidi Fang 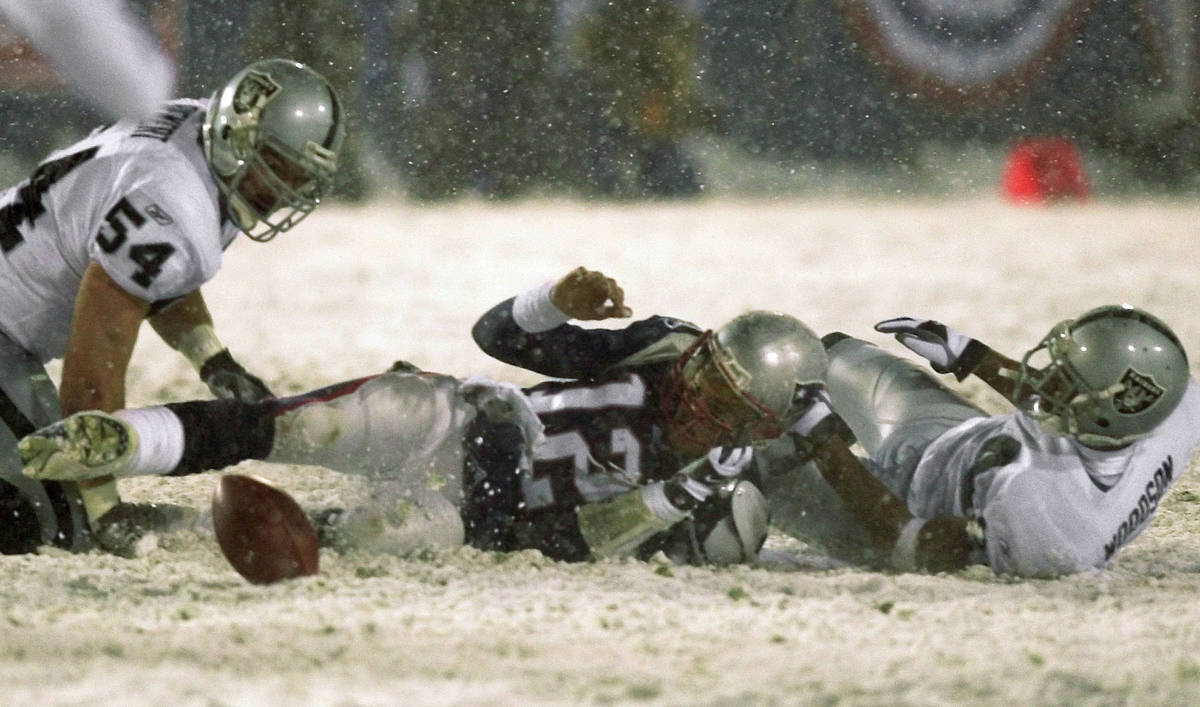 File-New England Patriots quarterback Tom Brady (12) loses the ball after being brought down by Oakland Raiders' Charles Woodson, right, while Greg Biekert (54) moves to recover the ball in the fourth quarter of their AFC Division Playoff game in Foxboro, Mass. Saturday night, Jan. 19, 2002. The play was appealed, and the Patriots retained possession. Raiders coach Jon Gruden says opening this season at Carolina and then playing New Orleans on made him feel like he was in a time warp. His nostalgia is even more amplified this week against New England. It’s been nearly two decades since he walked out of a snow-covered Foxboro Stadium on the wrong end of a 16-13 overtime loss to the Patriots in the infamous “tuck rule” game during the 2001 playoffs. (AP Photo/Elise Amendola, File)

Three takeaways from the Raiders’ 36-20 loss to the New England Patriots on Sunday in Foxborough, Massachusetts.

The Raiders papered over their defensive shortcomings the first two weeks with an offense that scored 34 points in each game. And the Raiders made enough key plays defensively to provide some hope that they could turn a corner on that side of the ball.

But the Patriots, especially in the second half, exposed the Raiders’ defensive liabilities.

New England ran the ball straight at the Raiders and dared them to stop it. The Raiders were unable to, giving up 250 yards on the ground. Sony Michel gained 117 yards.

Because of the production on the ground, Patriots quarterback Cam Newton had a relatively pedestrian performance, completing 17 of 28 passes for 162 yards.

2. No surprise from Belichick

Opponents know going into every game against New England that Patriots coach Bill Belichick will try to take away the best offensive weapon. And that he’ll usually succeed.

The question is how he’ll do it, which makes going against Belichick’s Pats especially daunting.

He mixed up his coverages against Raiders standout tight end Darren Waller, so much so that quarterback Derek Carr rarely looked his way. Carr targeted Waller just four times, and he didn’t catch a pass until about four minutes remained. Waller finished with two receptions for 9 yards, well after the outcome was no longer in doubt.

Waller entered the game after catching 12 passes for 103 yards and a touchdown in a Monday night victory over the New Orleans Saints. The performance against the Saints wasn’t a real surprise. Waller caught 90 passes for 1,145 yards and three TDs last season.

With Waller effectively out of the picture, Carr went to eight other receivers. Bryan Edwards looked as if he might step up, but after making a 34-yard catch in the third quarter, he left for the locker room with an ankle injury. It also didn’t help that Henry Ruggs didn’t play because of knee and hamstring injuries.

Charles Woodson must have felt like it was January 2002 all over again when a first-quarter fumble in New England didn’t go the Raiders’ way.

Josh Jacobs fumbled in the first quarter, but a replay showed he brought the ball back into his body while on the ground. Officials awarded the ball to the Patriots.

Woodson caused what appeared to be a fumble in the AFC playoff game on Jan. 19, 2002. Officials ruled that Patriots quarterback Tom Brady was tucking the ball, and New England kept the ball and launched its dynasty.

That became known as the “Tuck Rule Game” that grates at Raiders fans to this day.

Patriots got us again