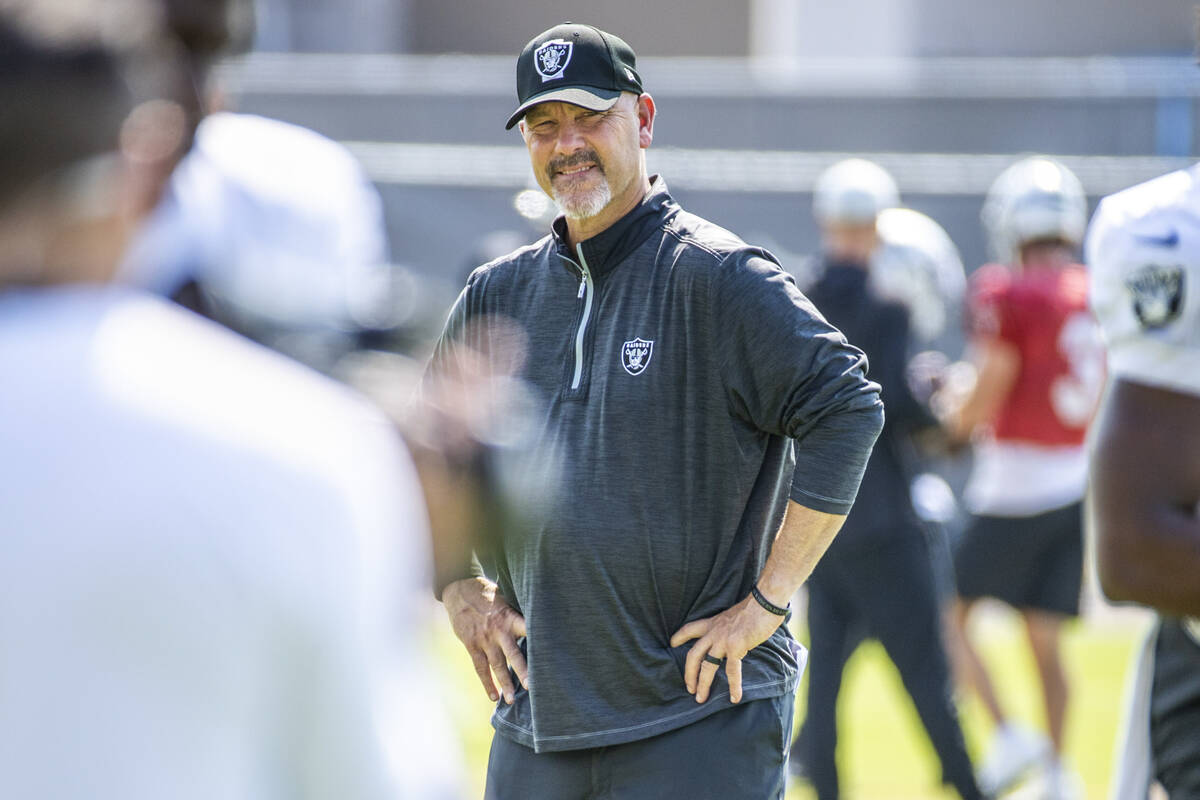 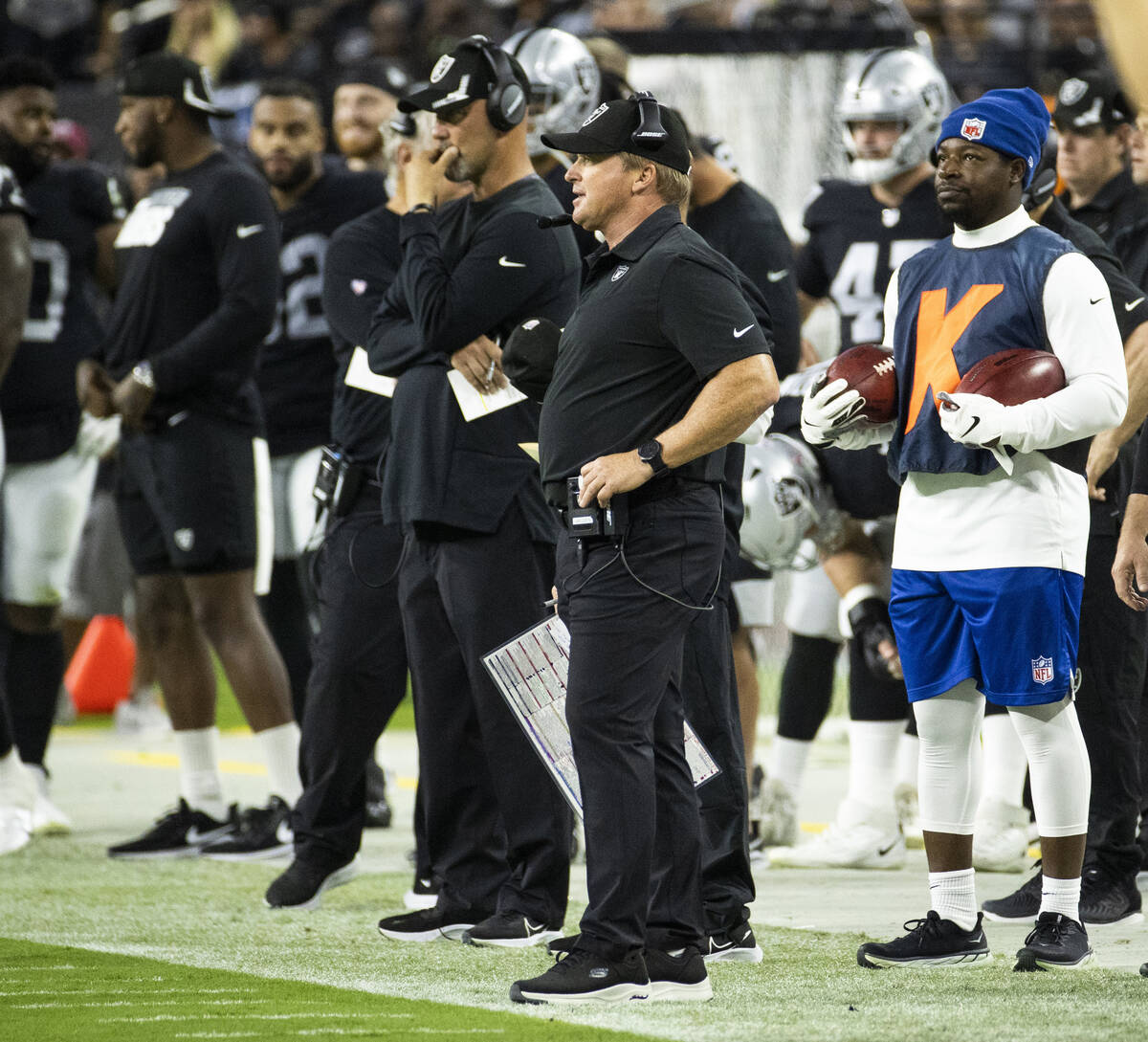 Raiders defensive coordinator Gus Bradley and head coach Jon Gruden on the sidelines during the third quarter of the Raiders' season-opener against the Baltimore Ravens at Allegiant Stadium on Monday, Sept. 13, 2021, in Las Vegas. (L.E. Baskow/Las Vegas Review-Journal) @Left_Eye_Images 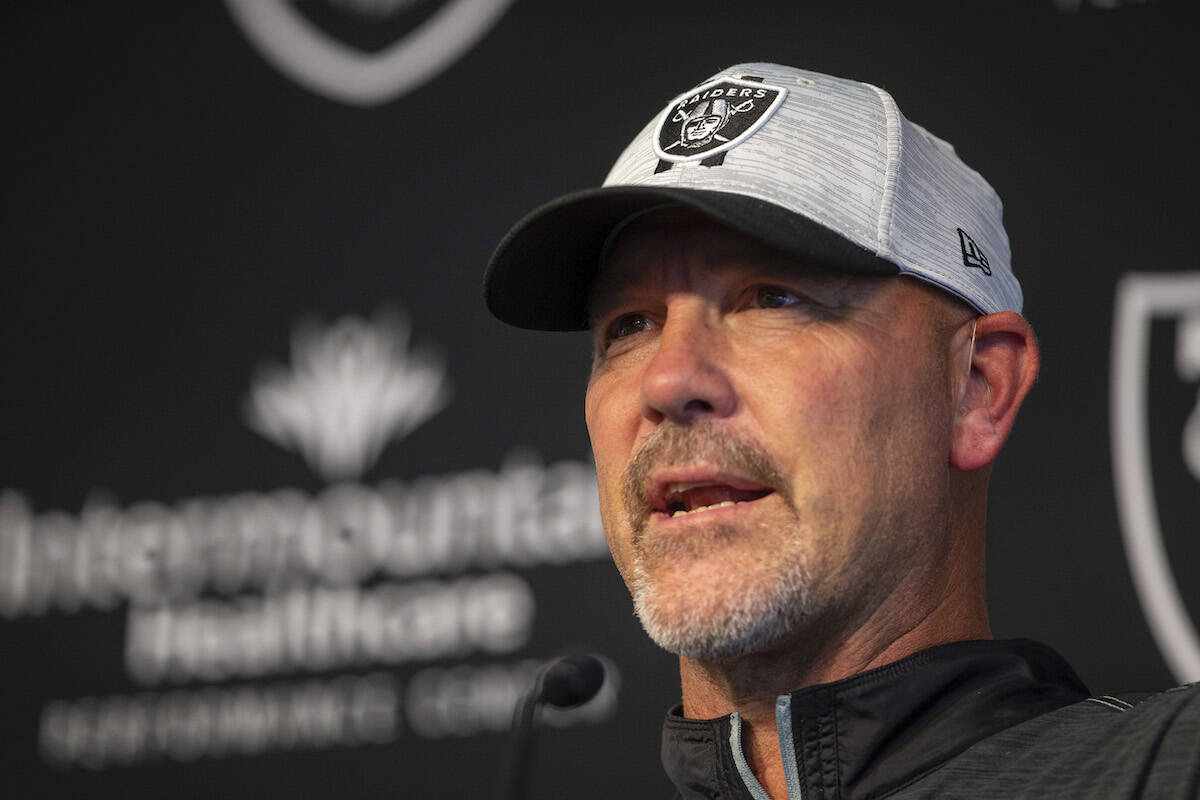 The football players at North Dakota State would spend the Saturday during bye weeks at Dacotah Field, running clinics for the kids in Fargo who aspired to one day play for the Bison.

North Dakota State coach Rocky Hager installed 14 stations around the playing surface and tasked a player or two with running a different drill or teaching a different technique. Then he would walk the field, noticing that one always seemed to be busier than the others.

The one manned by Bison safety Gus Bradley.

“His station was always so energetic, so enthusiastic,” said Hager, Bradley’s coach in 1987 and 1988. “Every group went through and they came out just energized. That’s just who Gus is.”

The pupils may have changed, evolving from kids in Fargo to professionals in the NFL, but Bradley’s enthusiasm and its impact has remained the same.

But his influence extends well beyond the limitations of schematics. He empowers his players with what seems like a limitless zest for football and life.

His spirit has helped rekindle defensive turnarounds for the Seattle Seahawks, Los Angeles Chargers and now the Raiders, despite a 14-48 head coaching record that covered four seasons with the Jacksonville Jaguars.

The Raiders this season already have beaten two teams that qualified for the postseason in 2020 and rank 10th in scoring defense after ranking 30th last season.

The improvements seem to validate the public praise the coach has received from Raiders players, dating to the beginning of the summer when he made an impression with his energy.

“The thing that’s really crazy to me is that he’s the same guy. If not, he has way more energy,” said defensive end Yannick Ngakoue, who played for Bradley in Jacksonville. “He always was a high-energy guy, a guy that’s personable, a great coach. Unfortunately, in Jacksonville, we didn’t do what we were supposed to do to keep him there.”

He’s been that way as a player in his hometown of Zumbrota, Minnesota — population 3,426 — and at North Dakota State, where he won a national championship in 1988. And at seven coaching stops since he began his career in 1990.

Bradley originally was going to pursue a career in business, but Hager encouraged him to coach after watching him lead at that fall clinic.

“Those kids really magnetize to you. You were like the Pied Piper,” Hager told Bradley that afternoon. “He said, ‘Oh, really?’ ”

Imagine if that hadn’t happened.

Maybe the Raiders would still be toiling away with one of the worst defenses in the NFL. One that hasn’t finished better than 20th in scoring defense since 2006 while ending six seasons in the bottom five.

But their new defensive coordinator sets a different standard, having twice coached the NFL’s best scoring defense. His players unusually are principled and prepared, aware of their responsibilities within the zone defensive scheme.

“There’s not anything we’ll miss that this offense is going to do,” Raiders linebacker K.J. Wright, who played two years for Bradley in Seattle, said of the mindset of a Bradley-coached defense. “We know what they’re going to do before it happens. He puts it on the board. … He’s crystal clear. He gives us a lot of information. It’s up to us to process it.”

Communication is front and center among Bradley’s strengths, dating to his days as a player. As a free safety, he was tasked with quarterbacking North Dakota State’s defense.

As a coach, he must unify individual interests, a task he’s mastered during 31 years on the job.

“He’s a consensus builder. They should send him to Washington, D.C. He can sit in a room and get people with all different kinds of ideas and convictions and get them on the same page,” said Wyoming coach Craig Bohl, under whom Bradley coached at North Dakota State for three seasons.

“His career is special,” Bohl said. “He has not changed. He’s able to relate to some youngster that may be from western North Dakota all the way to coaching All-Pro football players.”

Relatability is among the other key qualities that power Bradley’s personality. But there’s nothing fraudulent about the way he connects with others. He’s thoughtful and genuine, towing the line between empowerment and accountability with his players.

His steady demeanor can buoy units comprised of different personalities.

“He’s consistently positive, and that’s just his personality,” said Barrett Ruud, who played for the Tampa Bay Buccaneers when Bradley was their linebackers coach. “He doesn’t have bad days … and that makes a difference when guys are riding roller coasters on their own personalities. It affects everybody, especially when you’re leading a room.”

The positivity seems to pervade a defense in Las Vegas that’s already been tested by what figure to be two of the best teams in the AFC.

The organization may be different. The approach remains the same.