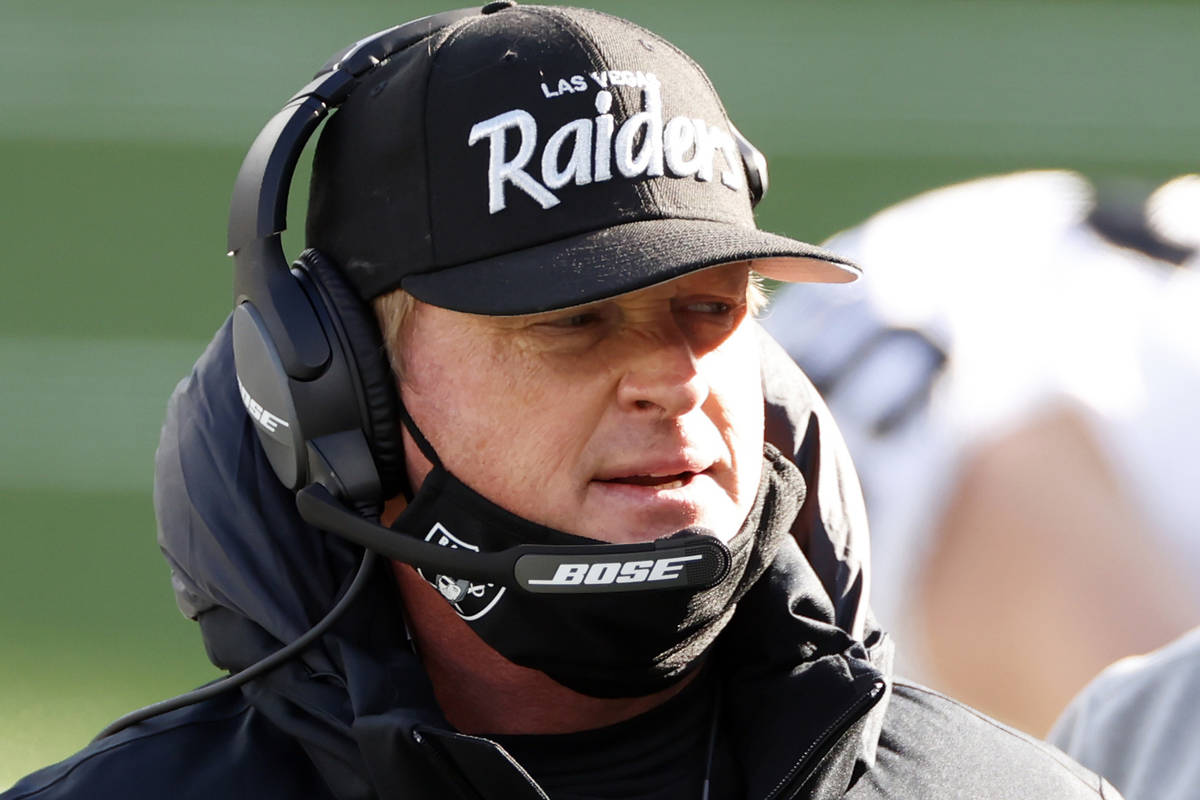 The Chiefs and Raiders have wrapped up their season series and won’t play again unless their paths cross in the postseason. That doesn’t mean the rivals aren’t on each other’s minds.

Raiders coach Jon Gruden referenced his team’s notorious victory lap around Arrowhead Stadium during Monday’s video conference with reporters when discussing the excitement of picking up a thrilling last-minute road victory over the Jets on Sunday.

“I thought about driving the bus around the stadium yesterday, but I didn’t want to get anybody alarmed,” Gruden said with a smirk.

He was referencing the Chiefs’ frustration at the supposed victory lap the Raiders did in their team bus after picking up a road win in Kansas City this season.

Several members of the organization referenced the incident before the rematch last month in Las Vegas, which the Chiefs won.

Gruden wasn’t able to provide much clarity on the status of running back Josh Jacobs and safety Johnathan Abram, though he was far from optimistic.

“I wouldn’t expect those guys to play right now based on what I saw last week,” he said. “I’m sure they’re down there getting treatment. We’ll get them back as soon as we can. Hopefully we get some good news on Wednesday.”

Cornerback Damon Arnette left his second straight game due to concussion protocols, though Gruden declined to read too much into it.

“I’m not going to create a dire situation,” he said. “I don’t even know if it’s a true concussion.”

Gruden said he believes Jets running back Frank Gore could have been flagged for initiating the contact with his helmet on the play on which Arnette was injured. The play was similar to a call that went against Jacobs last week in Atlanta.

The veteran, who signed a three-year, $25 million deal with the Raiders this offseason and started the previous two games in place of Clelin Ferrell, appears to have simply lost his spot in the rotation. Ferrell returned to play Sunday and newcomer Vic Beasley was called up from the practice squad.

“We put a hat on eight defensive linemen and we like Carl, we like everybody, we try to play the guys that have the best weeks of practice,” Gruden said on Monday. “We feel like we want to create competition. Vic Beasley’s here to create that. He didn’t come here to sit on the bench.”

Gruden is also eager to add defensive end Takk McKinley, who was claimed off waivers last month, to the mix.

“He’s not going to be just sitting out there waiting until next year,” Gruden said. “We’re going to put the ball down Wednesday in the morning for practice and we’re going to play the guys that performed the best on Wednesday, Thursday and Friday.”

Ross played in three games this season, including Sunday’s win over the Jets when he was on the field for nine snaps and made one tackle.

The move corresponded with offensive tackle Trent Brown being moved from the exempt list back to the active roster.

Quarterback Derek Carr was nominated for the FedEx Air NFL Player of the Week award after posting big numbers and throwing a dramatic game-winning touchdown to Henry Ruggs in the final seconds of Sunday’s game.

Carr threw for 381 yards and three touchdowns for a quarterback rating of 97.9. He was also nominated for the award in Week 5.

His competition for the award is Cleveland’s Baker Mayfield and Detroit’s Matthew Stafford.

If Carr wins the weekly award, Volunteers in Medicine of Southern Nevada will receive an emergency backpack that helps care for 500 people in the community.

Fans can vote through NFL.com/FedEx or through polls on the NFL Twitter page.