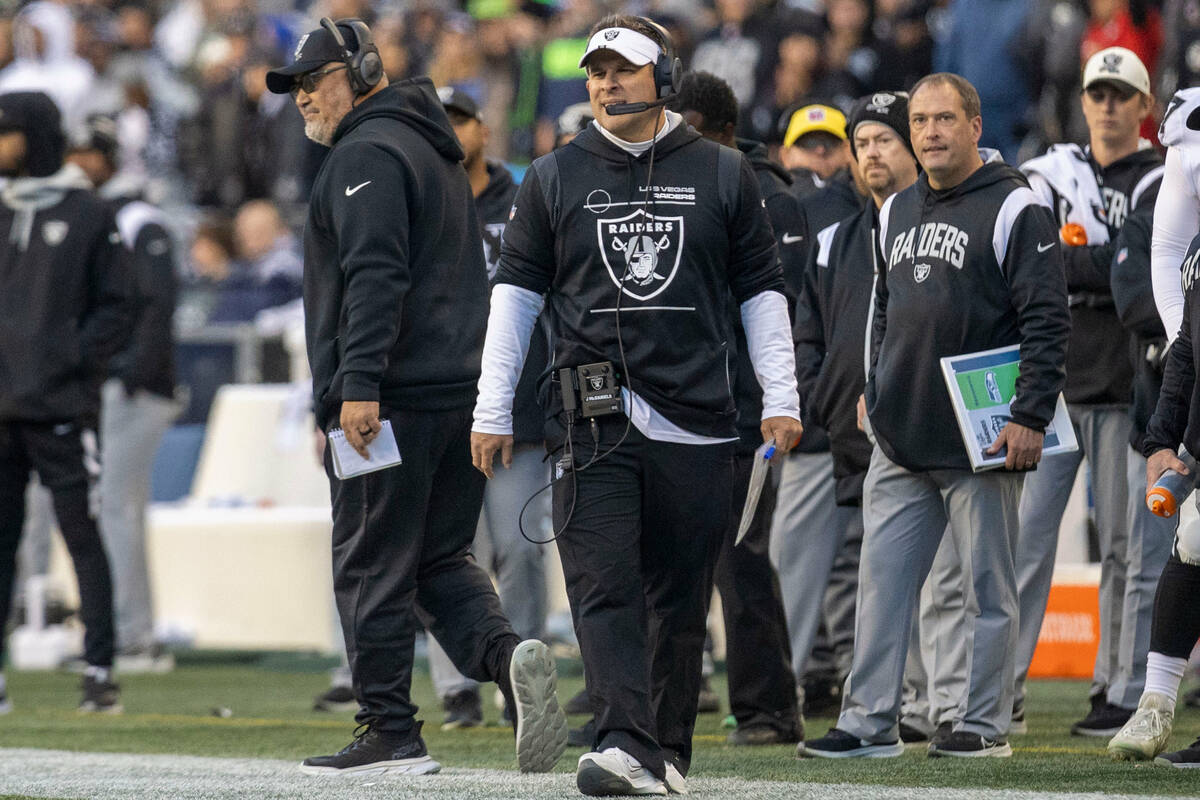 Raiders head coach Josh McDaniels walks the sideline during the second half of an NFL game against the Seattle Seahawks at Lumen Field on Sunday, Nov. 27, 2022, in Seattle. (Heidi Fang/Las Vegas Review-Journal) @HeidiFang

The Raiders came through in dramatic fashion Sunday for a second consecutive week to win back-to-back games for the first time this season.

It may not have happened had the team not had previous experiences of this season, both good and bad, to rely upon.

“I think we learned something in Denver about the way we needed to play under pressure and perform, that we could do it,” coach Josh McDaniels said Monday at the team facility in Henderson. “Sometimes you need a few of those things to happen to just give you the confidence to go back and repeat that same type of success somewhere else.”

Far too many times early in the season, the Raiders didn’t find a way to make those key plays down the stretch. McDaniels believes those times when the team came up short were also valuable in building a foundation.

“I think some of the biggest lessons we’ve learned have come from the games that we haven’t been able to finish,” he said. “And so, maybe the last two games there’s been some winning done because of some of the things that we learned when we lost a few games like that.”

One of the things McDaniels noticed on the sideline was the belief he saw regardless of the ups and downs of a wild game. That comes from confidence in the direction of the organization, which is of course helped by seeing positive results.

“Sometimes it gets challenging to continue to just drip water on the rock here and hope something sprouts,” McDaniels said. “I think that we’re continuing to improve in small areas, our field goal protection, our kickoff coverage. … You’re focusing on the little things that you can control. Obviously, it tastes better when you win, to listen and learn and correct things.”

The thrill of victory has been evident from post-game videos and social media posts. The attitude is just different. But McDaniels is proud of how the work has remained the same regardless of the swings in emotion from losing streak to winning streak.

“Honestly, I really don’t notice any difference relative to our day-to-day approach,” he said. “That’s a compliment to the guys. It’s a long season and you’re going to go through some of these ups and downs. The fact that we won two doesn’t mean anything for this coming week either. I think you are in control of what you do each day. You’re not necessarily in control of streaks.”

* On Seattle’s Darrell Taylor running off the sideline and participating in a play during Sunday’s game, McDaniels said: “We’re the Raiders,” he said with a laugh. “Yes, I saw the play. No, I’ve never seen anything like that before. I mean, I think he went out there to celebrate, and then he ended up making a couple of blocks there to try to help his buddy. Yeah, they missed the call. Clearly, that should have been a penalty. But I’ll leave that at that.”

McDaniels said the offensive players immediately ran to the sideline and started pointing out that Taylor had joined the play from the sideline. He also indicated this wasn’t the first “Welcome to the Raiders” moment he’s experienced this season, referring to the franchise’s well-documented adversarial relationship with the NFL and its game officials.

“I’ve had multiple of those,” he said. “I’m aware of the last 20 years relative to the statistics. So, we’ll see if we can change that a little bit.”

* On how close cornerback Nate Hobbs is to returning from injured reserve from a broken hand:

“He got sick. So, there really wasn’t anything we could control. I just didn’t feel comfortable bringing him up and playing him without having the opportunity to practice. … Hopefully, we’ll be able to turn the corner on it this week.”