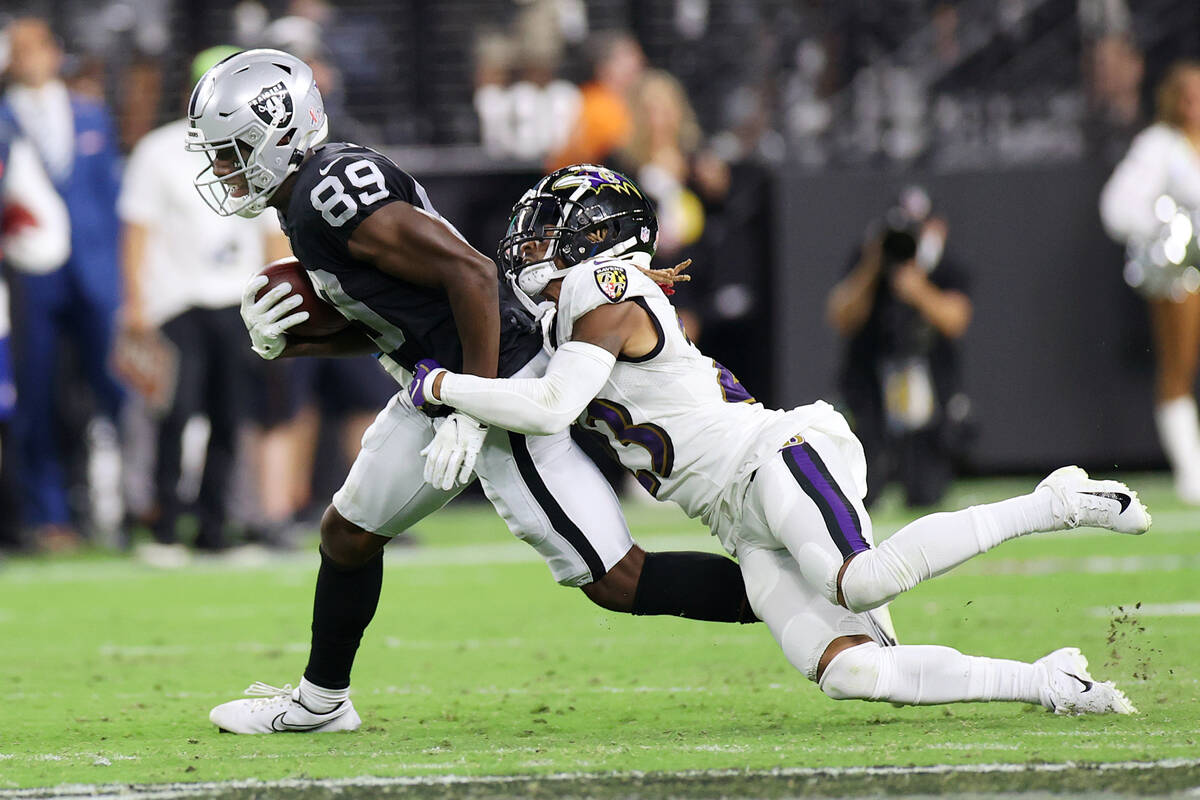 Here’s a look at selected player proposition wagers for Sunday’s game between the Raiders and Miami Dolphins, with picks and analysis on each from the Vegas Nation staff.

■ Vincent Bonsignore: Over —The Raiders are still putting their run game together, and part of that is a short passing game.

■ Adam Hill: Over — The Raiders don’t want to throw as much as they have so far, but offensive line issues have forced their hand.

■ Sam Gordon: Over — Carr’s arm is the most efficient offense the Raiders have, even against a stout Miami secondary.

■ Heidi Fang: Over — Even if Jacobs were to play, I’d still expect about 40 passing attempts from Carr.

■ Vincent Bonsignore: Over — More and more, Derek Carr is developing a trust factor with his second-year wide receiver

■ Ed Graney: Over — Carr is looking for him more and more. No, seriously.

■ Adam Hill: Over — It may take a bit for the market to catch up with Edwards’ emergence in the offense.

■ Sam Gordon: Over — Edwards continues to emerge as a viable option in the receiving corps.

■ Heidi Fang: Over — Carr showed against Pittsburgh that he is going to spread the ball around to his receivers.

■ Vincent Bonsignore: Under — The Dolphins will make it a point to take Waller out of the game, opening the door for other weapons.

■ Ed Graney: Over — Kid had 65 last week and it seemed far less. Back to breaking out.

■ Adam Hill: Under — It’s always tempting to bet every Waller prop over, but with the additional defensive attention and emergence of more weapons in this offense, this is a high bar to clear.

■ Sam Gordon: Over — The development of Edwards and Henry Ruggs on the outside should free some space for the 29-year-old superstar.

■ Heidi Fang: Over — Even on a slow day, I expect Waller to hit at least 75 yards receiving.

■ Vincent Bonsignore: Under —Between the Raiders’ pass rush and how they cover on the back end, throwing yards will be difficult.

■ Ed Graney: Over — You tend to throw a lot when behind. (See final pick.)

■ Adam Hill: Over — Brissett had one of the most inefficient efforts in recent memory last week, but he did put the ball in the air 40 times and could do so again if Miami falls behind.

■ Sam Gordon: Under — Miami’s offensive struggles extend beyond the play of their backup quarterback.

■ Heidi Fang: Under — The Dolphins struggled to produce offense against the Bills, and I expect the trend to continue against the Raiders.

■ Vincent Bonsignore: Over — The Dolphins wants to play ball control, so expect a heavy lean on Gaskin.

■ Ed Graney: Over — But not enough to where a starting back can’t reach this number.

■ Adam Hill: Over — Gaskin put on a show at Allegiant Stadium last year and the Dolphins can’t pass protect right now, so they may try to establish the run.

■ Sam Gordon: Over — Gaskin could help alleviate some of the pressure that Brissett will face.

■ Heidi Fang: Under — The running-back-by-committee approach is how the Dolphins have attacked the season. Gaskin hasn’t even topped 50 rushing yards yet this season.

MOST READ: Raiders
1
Raiders report: For Rich Bisaccia, it’s ‘on to Philadelphia’

2
Jon Gruden: ‘I’ll get better from this’