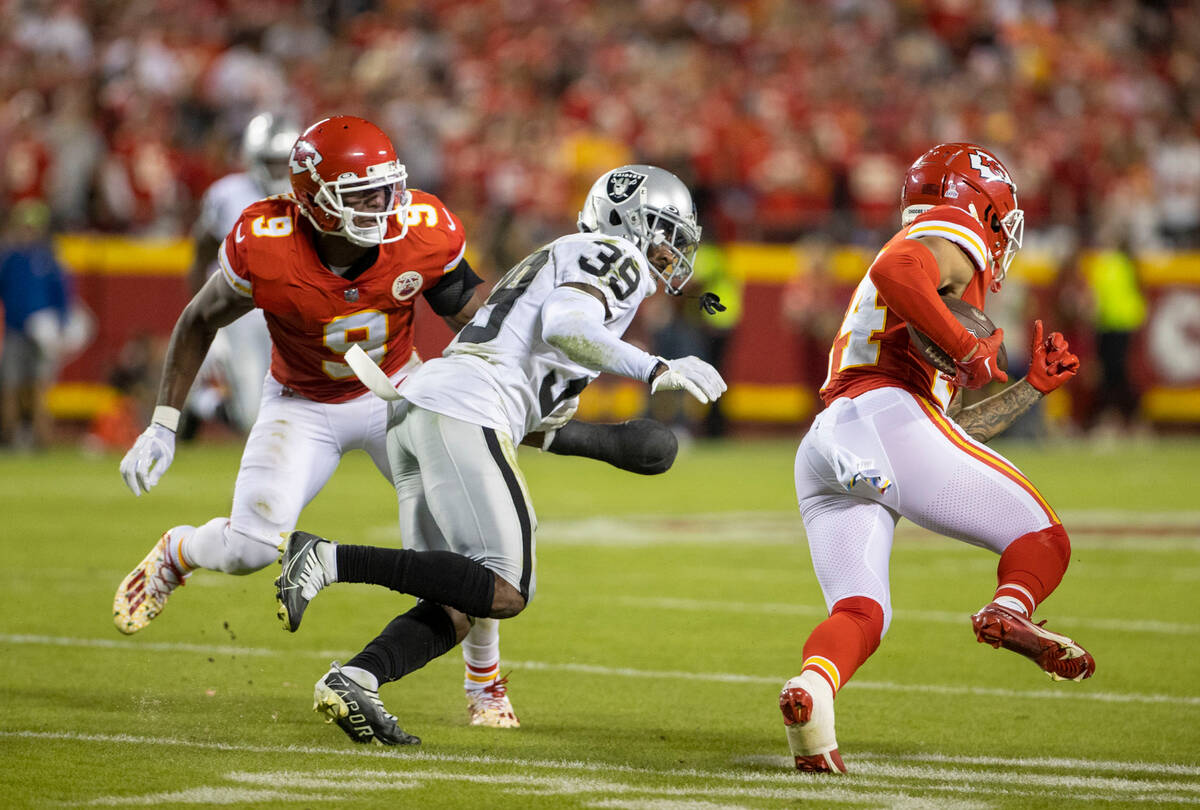 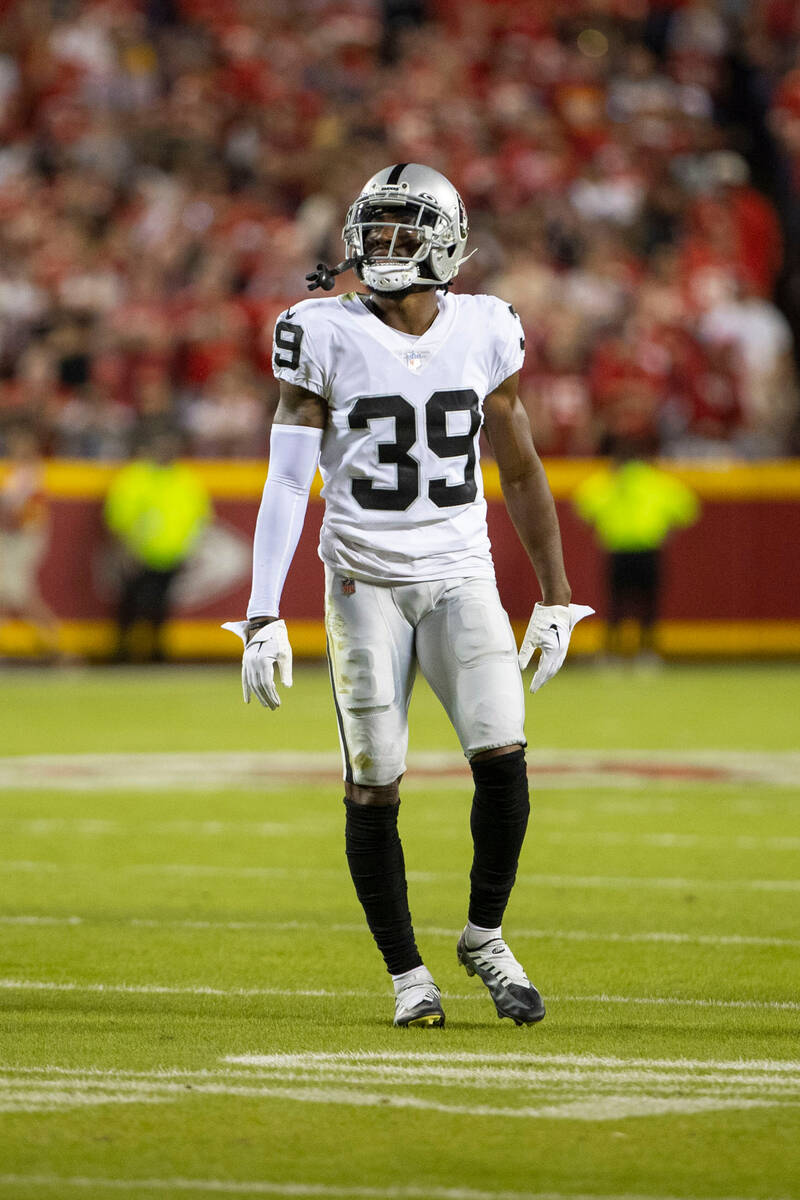 Raiders cornerback Nate Hobbs (39) watches a replay on a big screen during the first half of an NFL game against the Kansas City Chiefs at GEHA Field at Arrowhead Stadium on Monday, Oct. 10, 2022, in Kansas City, Mo. (Heidi Fang/Las Vegas Review-Journal) @HeidiFang 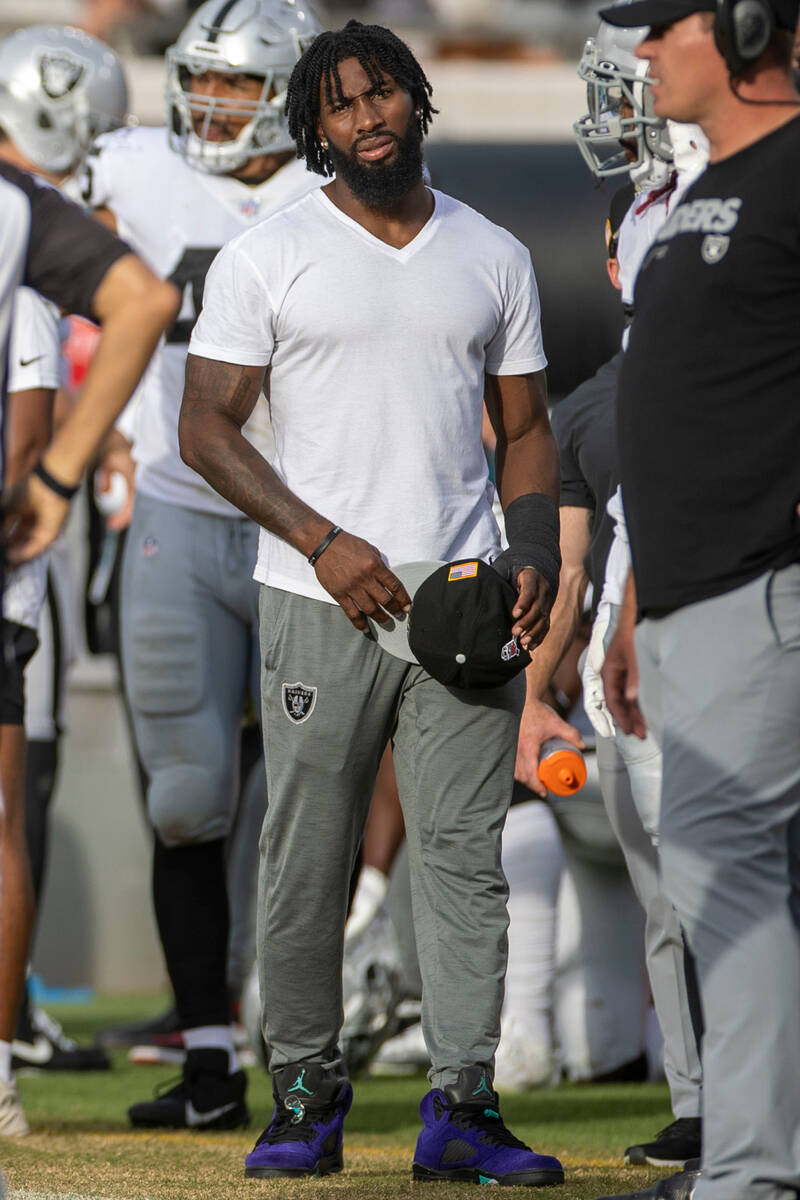 Raiders cornerback Nate Hobbs on the sideline during the second half of an NFL game against the Jacksonville Jaguars at TIAA Bank Field on Sunday, Nov. 6, 2022, in Jacksonville, Fla. (Heidi Fang/Las Vegas Review-Journal) @HeidiFang

To put Nate Hobbs’ toughness in perspective and better understand his frustration about needing surgery on his left hand, it’s important to remember the Raiders’ cornerback returned to action in the game in which he suffered the injury.

And played pretty well, too, while dealing with significant pain and running around with a cast on the hand in the Oct. 10 game against the Chiefs.

You can imagine his anger, then, when the medical staff told him the next day that he wouldn’t be returning to the field anytime soon as a result of needing surgery to repair broken bones in the hand.

“I was pretty upset when I first got that news,” said Hobbs, expected to return Sunday when the Raiders host the Chargers at Allegiant Stadium.

The second-year player was supposed to return for last Sunday’s game against the Seahawks, but he became sick in the middle of the week, thus reducing his practice time and delaying the return.

Now, the Raiders are optimistic that their best cornerback will be back on the field.

“I’m hopeful that Nate will be,” coach Josh McDaniels said. “Nate’s feeling better, and hopefully that will take form this week.”

Defensive coordinator Patrick Graham likes the sound of that.

“I’m never going to say we don’t want good players on the field,” he said jokingly.

No one would like that more than Hobbs, who has missed the past six games.

“Mentally it took about a day or two to adjust,” he said of his reaction when he was told how much time he would miss. “Very frustrating.”

When his frustration finally subsided, Hobbs took a long-term view of the situation.

“It was something that had to take place,” he said. “And if I had to do it, I was going to make the better decision for my career.”

His common sense took over from there. Fighting an emotional battle over the inevitability of it all served him no good, so he fell back on old habits.

“I try to control what I can control,” Hobbs said. “And the only thing I could control at that point was my attitude and the way I approached every day.”

It guaranteed nothing other than he would be ready to play as soon as he was cleared.

Hobbs also found merit in the new vantage point with which he watched football. He soaked things either on the sideline or watching on TV. His time wasn’t wasted.

“I definitely got to see different perspectives,” he said. “Just the way different coaches think and different players respond to different things from another perspective.”

But it wasn’t how he wanted to spend his Sundays.

“It just made me really antsy to play,” Hobbs said. “Watching my teammates go out there and lay it on the line, how hard they work, it just makes you want to help your teammates. I’m just grateful I got another opportunity.”