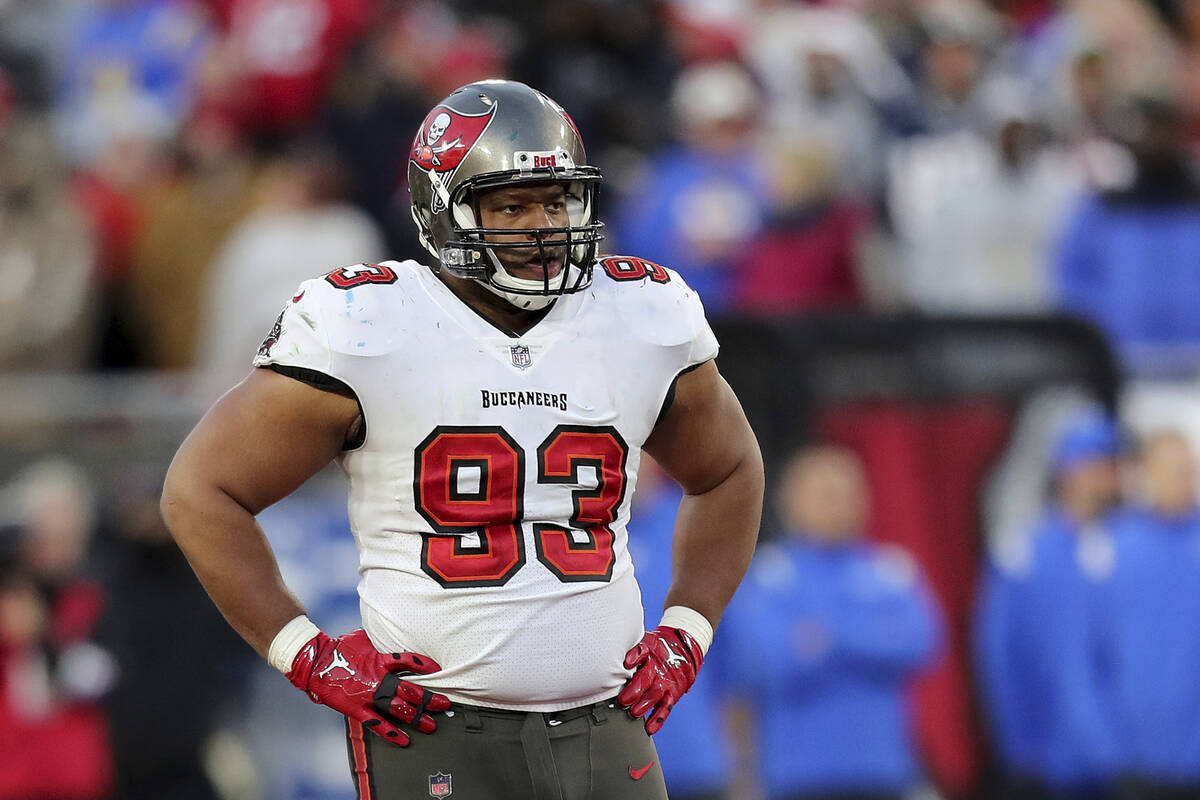 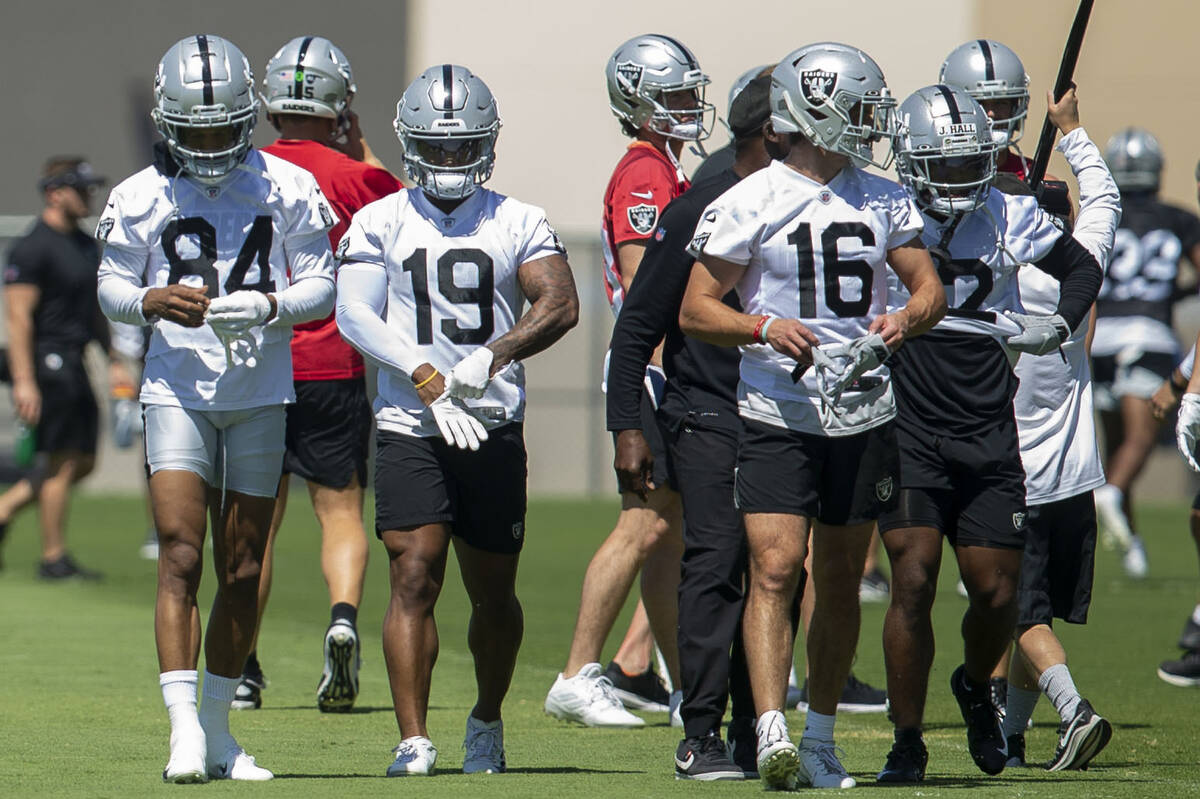 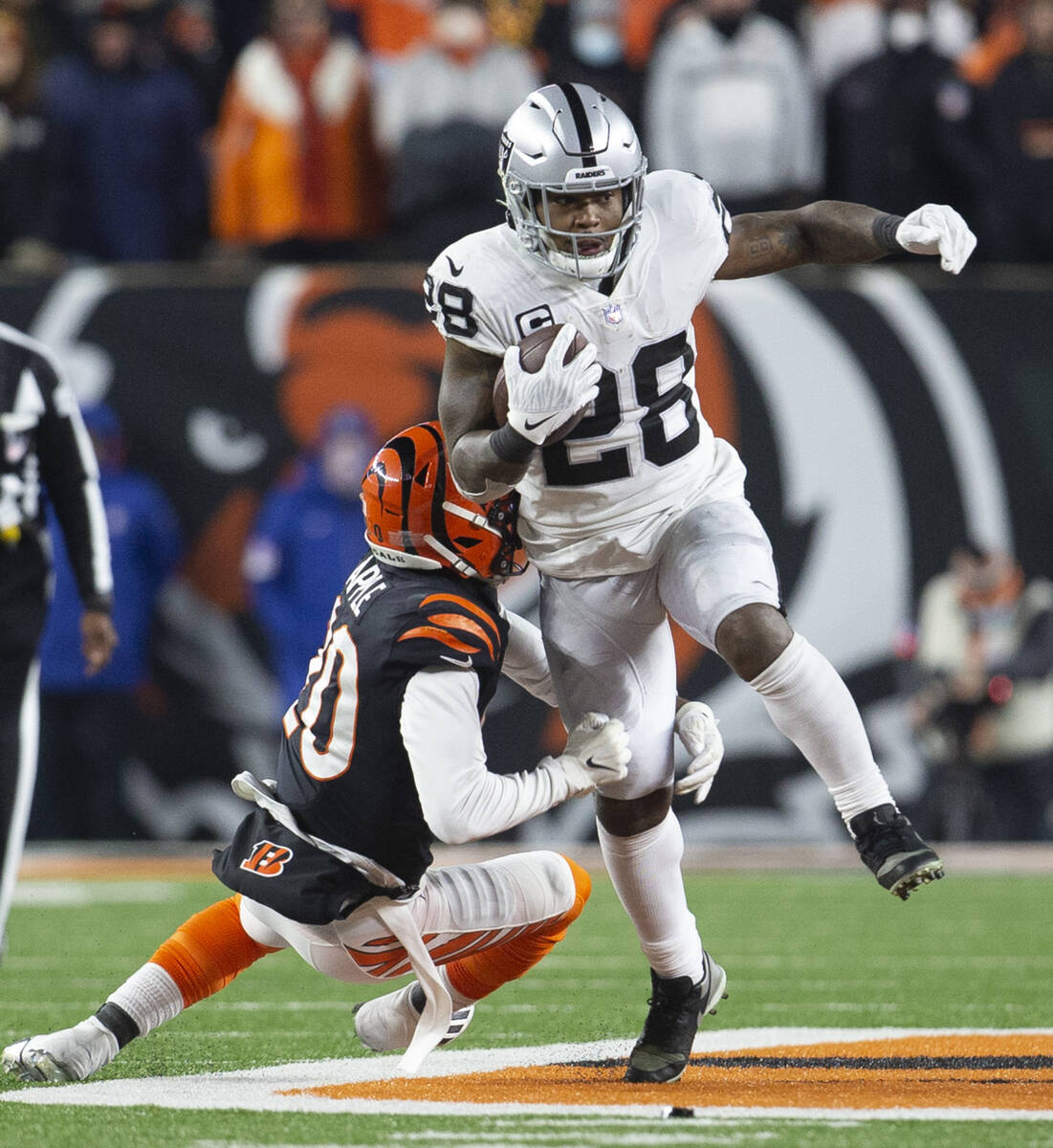 Raiders running back Josh Jacobs (28) runs as Cincinnati Bengals cornerback Eli Apple (20) looks for the tackle during the second half of an NFL playoff game at Paul Brown Stadium on Saturday, Jan. 15, 2022, in Cincinnati. (Heidi Fang/Las Vegas Review-Journal) @HeidiFang

The Raiders have pushed the pause button on the on-field portion of their offseason.

After completing their offseason program this week — with the final day called off as a reward for the work they put in the past two months — they will take time off before gathering for training camp in late July.

It was an ambitious past few months, which included several key changes. But as a new personnel department and coaching staff get settled, more and more of the focus will be on how prepared the Raiders are to begin training camp.

Here’s a sampling of what arrived in this week’s mailbag:

(VB): The veteran defensive tackle remains a free agent, and his name has been linked to the Raiders. But the sense is, that is more of a social media connection. A pairing between the two is unlikely at this point.

(@renfrow_stan): Now that minicamp has concluded, are the Raiders going to look at free agents to fortify any specific position groups?

(Vincent Bonsignore): The Raiders are always on the lookout for ways to improve the roster. In no particular order, the offensive and defensive lines and the secondary are areas they continue to monitor.

Are there potential answers on the open market? That depends on how the Raiders view the players on their roster compared to free agents. The fact that the Raiders haven’t tapped into the free agent market in any tangible way recently suggests they believe their players offer better options than the ones on the open market. You also can’t discount the cost in diving back into free agency.

On the other hand, don’t be in a rush to brush off the possibility of the Raiders trading for a player they believe can offer an upgrade.

Julio Vasquez (@SVT_VASQUEZ): Can we see wide receiver Tyron Johnson used as a deep threat speed guy down the field?

(VB): Johnson gets lost in the shuffle a bit, but he had some nice moments during minicamp, and there is no doubt he adds speed. If he wins a roster spot and dresses on game day, he’s a player the Raiders could get on the field when they want to add the element of speed. They figure to keep Davante Adams, Hunter Renfrow, Keelan Cole, Demarcus Robinson and Mack Hollins at wide receiver, so keeping Johnson would mean six at the position, which is one more than they carried last season.

(VB): Jacobs wasn’t on the field during minicamp, so he is obviously dealing with something. The Raiders did not divulge the nature of the situation, and the sense is it isn’t anything serious.

Mike Tar (@MikeTar5): Do you get the sense the players like it in Las Vegas? Is it a distraction, as many people say it is?

(VB): It’s obvious the players enjoy living in the area, as they all flock to the team’s headquarters during the offseason to take advantage of everything it has to offer. That includes periods of the offseason when coaches are not allowed contact with players. The point is, a lot of players live in the valley year-round because of the weather and affordability. In terms of Las Vegas as a distraction, there are plenty of nice areas to live and far enough away from the Strip that it isn’t a huge distraction.