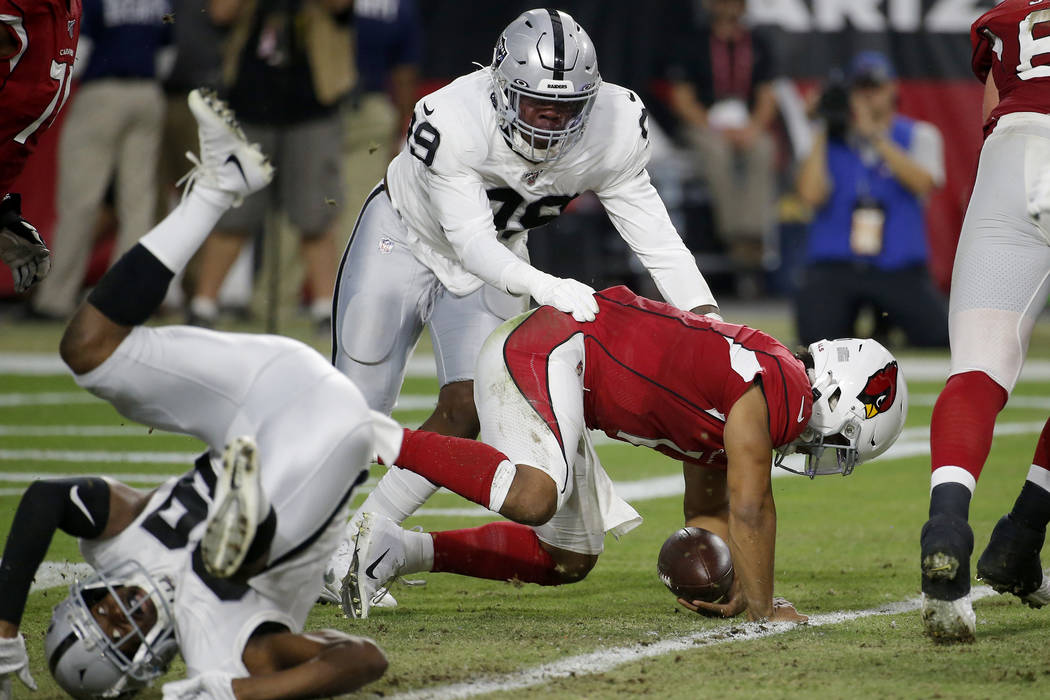 Arizona Cardinals quarterback Kyler Murray (1) is tackled in the end zone for a safety by by Oakland Raiders free safety Lamarcus Joyner, left, as defensive end Arden Key (99) pursues during the first half of an an NFL football game, Thursday, Aug. 15, 2019, in Glendale, Ariz. (AP Photo/Rick Scuteri) 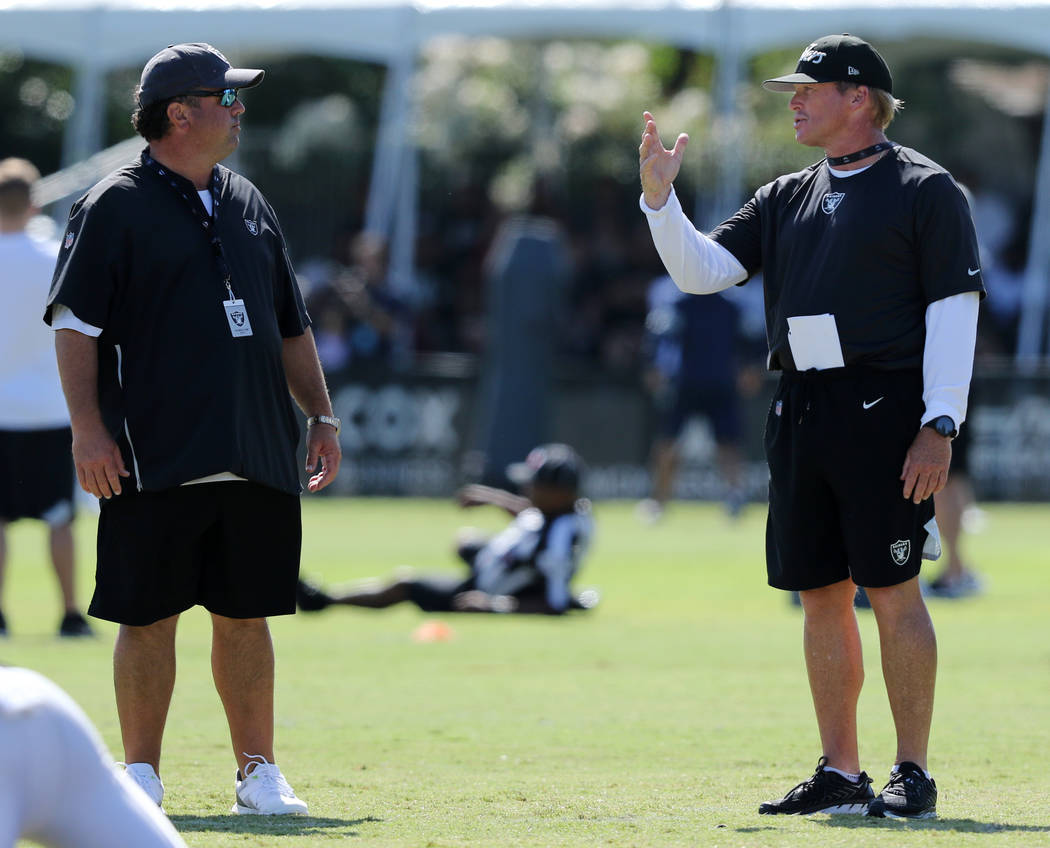 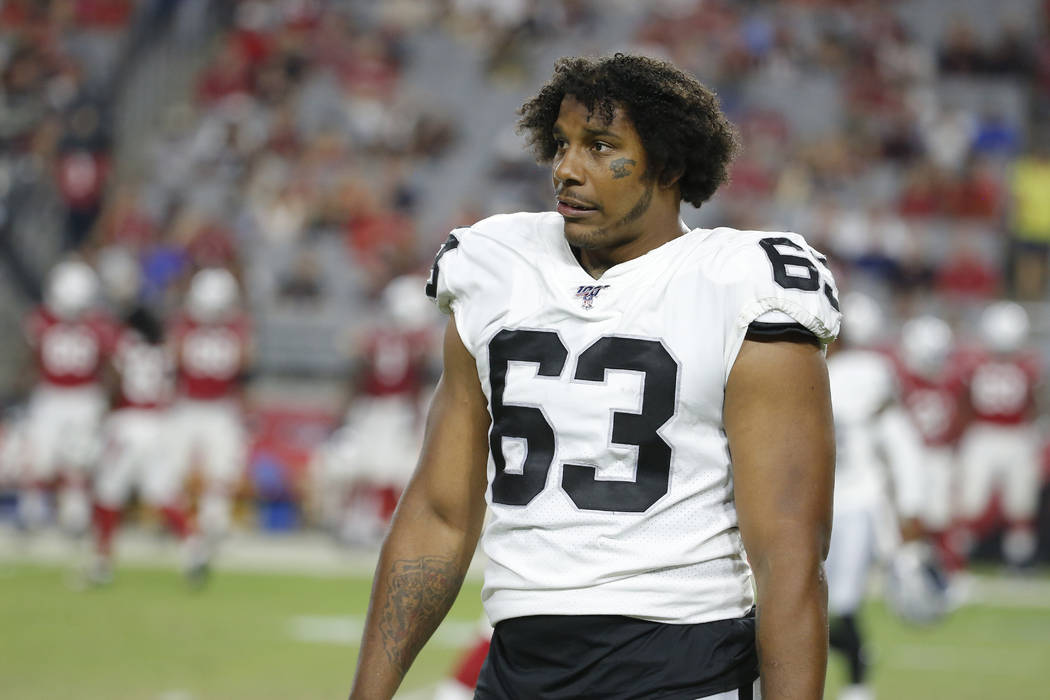 ALAMEDA, Calif. — The much-maligned Raiders pass rush has shown signs of life over the past two weeks.

After finishing with just 13 sacks in 2018 — the lowest output for an NFL team in a decade — the Raiders have picked up six sacks in their last two preseason games.

In the matchup against the Arizona Cardinals, the starting defense recorded two sacks in three plays — the second coming from slot corner Lamarcus Joyner for a safety on 2019 No. 1 overall pick Kyler Murray. Defensive lineman Ethan Westbrooks added another sack in the fourth quarter.

But in Thursday night’s 22-21 preseason win over the Green Bay Packers, Raiders coach Jon Gruden wasn’t happy with the lack of pressure in the game’s first 30 minutes.

“We challenged them at halftime — we didn’t have anything in the first half. We didn’t get a sniff,” Gruden said. “And that was one of the reasons why they were so successful offensively.”

Green Bay scored all 21 of its points in the second quarter, gashing the Raiders’ defense with three (shortened) field-length drives.

But the defense accepted that challenge and came out firing in the third quarter, with second-year defensive tackle P.J. Hall bringing down Packers backup QB DeShone Kizer to start Green Bay’s first possession.

“I thought P.J. Hall got the party started,” Gruden said.

Much like in Arizona, a play later the Raiders got another sack — this one from outside linebacker James Cowser as Kizer rolled to his right, attempting to evade defenders on third down.

Linebacker Nicholas Morrow picked up the third sack on a fourth-down play later in the third quarter.

And if the coaches are going to ask more of the players, it makes sense that Guenther would put them in position to do more.

“That’s the key — getting after the quarterback, getting them behind in the down and distances,” Gruden said. “And I thought P.J. Hall, Guenther and his guys did a nice job, particularly in the second half.”

— The Raiders weren’t playing starters on Thursday. They even left many players back in Oakland rather than making them take the midweek trip to Canada. But linebacker Brandon Marshall — who had a sack in the victory over the Cardinals — played 26 snaps (36 percent) on Thursday night.

Gruden said the Raiders are still evaluating the veteran linebacker, who spent the last six years with the Denver Broncos.

“Health-wise, he’s had some dark moments coming back from his knee. And he didn’t do much for us in the offseason program. I think he’s gradually getting himself back into tip-top football shape and playing speed,” Gruden said. “That’s a key to his game, so we just wanted to give him a few opportunities just to prove to himself and all of us that he is back.”

Marshall, a Las Vegas native, is on a one-year contract with the Raiders.

— The Raiders will be back on the practice field Sunday, Monday and Tuesday before going to Seattle for the final preseason matchup with the Seahawks on Thursday.