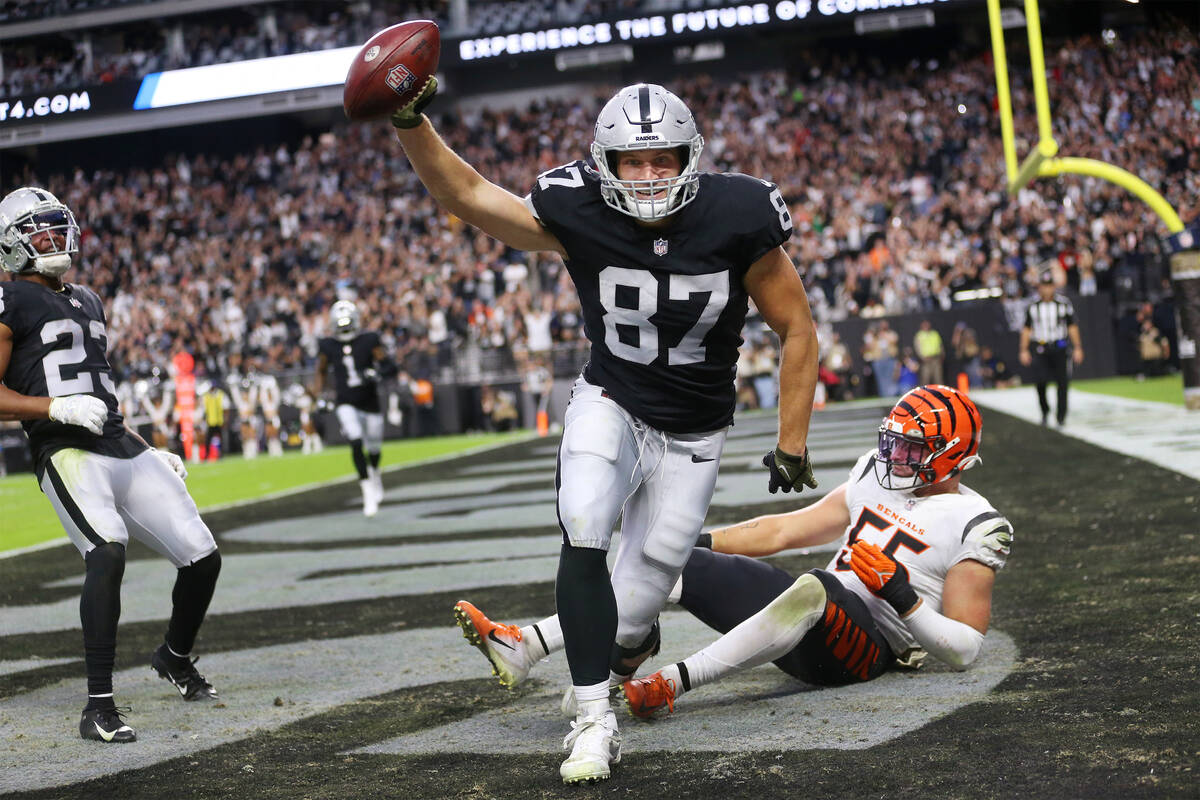 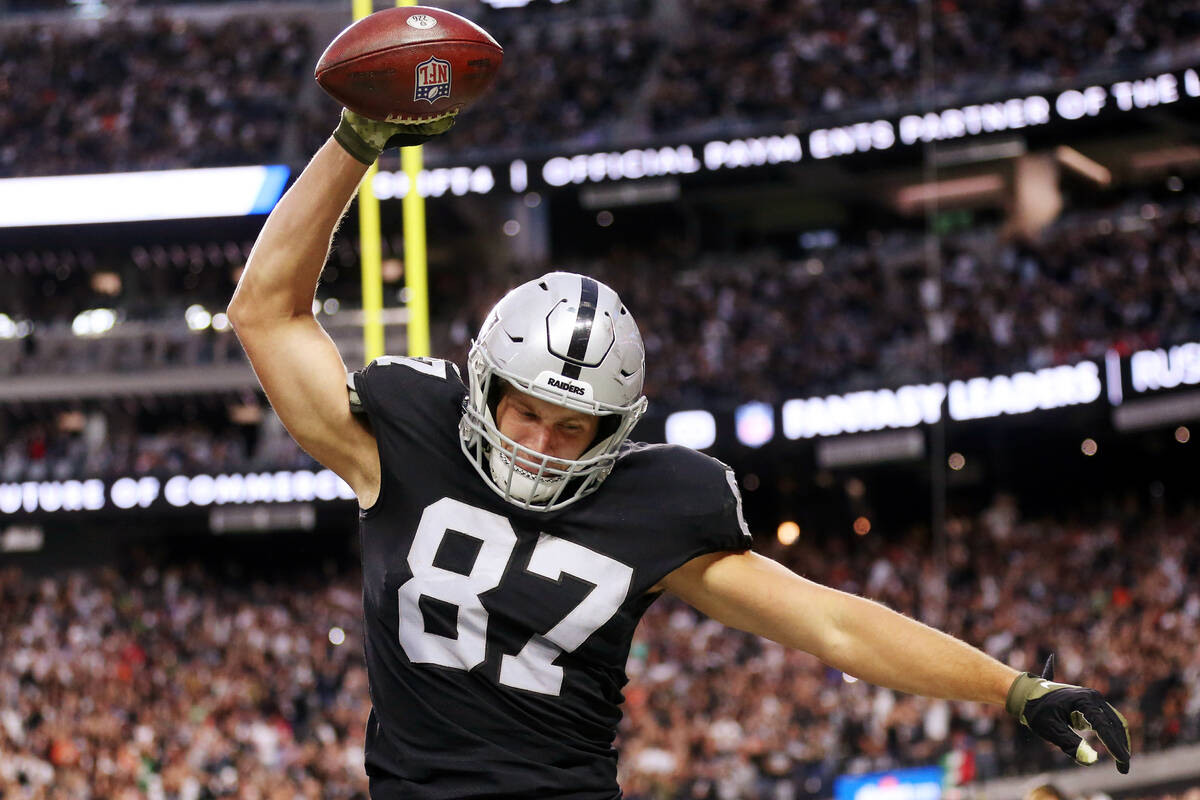 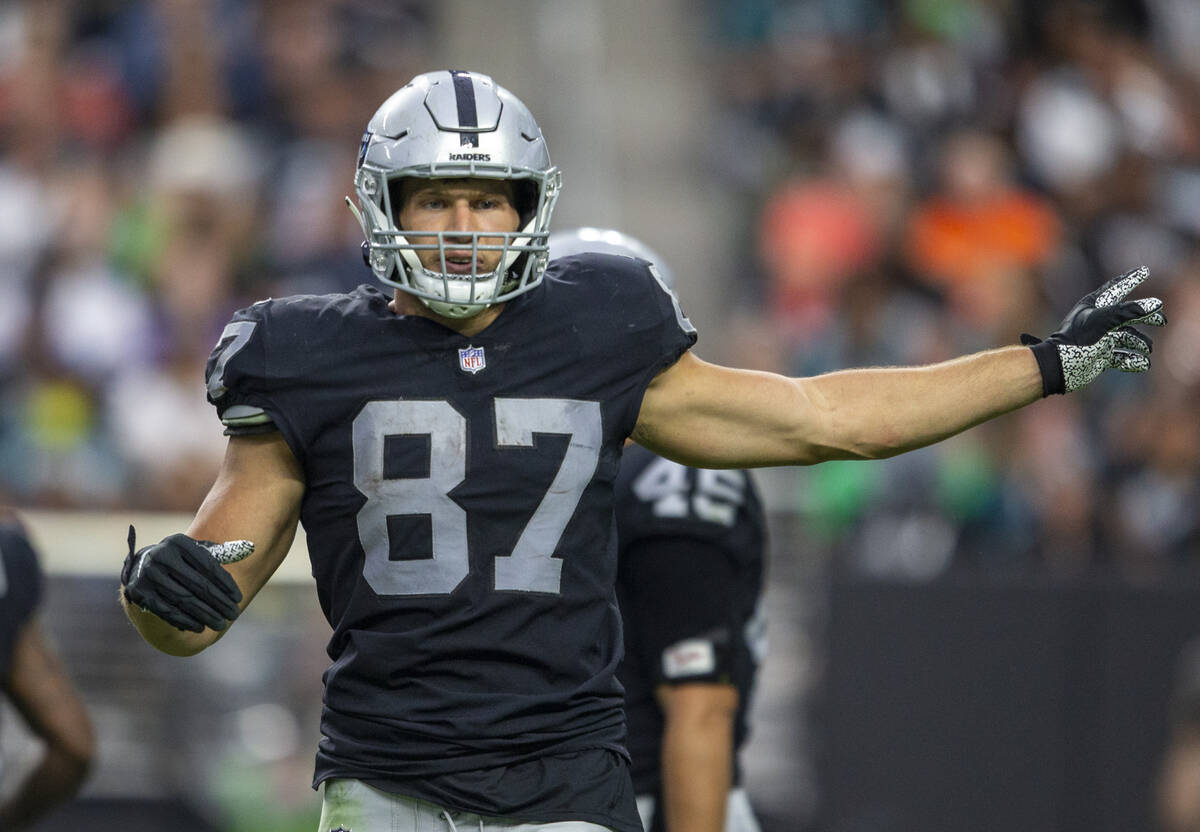 Raiders tight end Foster Moreau (87) moves into position prior to a play during the second quarter of an NFL football game against the Philadelphia Eagles on Sunday, Oct. 24, 2021, at Allegiant Stadium in Las Vegas. (Heidi Fang/Las Vegas Review-Journal) @HeidiFang

But he’s not ready to embrace his alma mater’s new coach, Brian Kelly, who went viral on social media Thursday speaking with what appeared to be a southern twang developed overnight.

While Moreau said he had yet to see the clip, he paused for more than five seconds when asked what he thought of Kelly’s hiring.

“My mom always said if you don’t have anything nice to say, you should probably just keep it to yourself,” Moreau said. “I don’t know anything about Brian Kelly. I know he’s a family-oriented man, and I’m excited for the opportunity he has.”

The hesitancy to endorse Kelly might be more of an issue with the school’s decision to move on from Ed Orgeron, who coached Moreau.

“Obviously, ‘Coach O’ knew every inch of Louisiana and anything in that soil, and that was very meaningful to the state and the university. He was not only an incredible coach but also an ambassador for football in southeast Louisiana.”

Star tight end Darren Waller is doubtful for Sunday’s game with back and knee injuries. Interim coach Rich Bisaccia said Waller will be evaluated again Saturday, but he didn’t practice all week.

“He had two good days of running around, and he worked on the scout team a little bit trying to get him back in the football routine,” Bisaccia said. “He had a better day today than yesterday.”

Moreau had six catches for 60 yards and a touchdown against the Eagles the only other time Waller missed a game this season.

Bisaccia said the standard doesn’t change when Moreau is called upon for a bigger role on offense, but it does mean a decreased share of special teams snaps.

“We have a pretty tight relationship,” Moreau said of Bisaccia, the special teams coordinator. “He won’t put me on kickoff, bless him. But there’s no way I’d be off punt, and I’ll definitely be going in at certain times whenever needed.”

Washington defensive coordinator Jack Del Rio was the head coach of the Raiders from 2015 to 2017.

While the roster has almost completely turned over, Derek Carr was the quarterback for Del Rio’s tenure.

Bisaccia said there’s always an intriguing chess match when a coach and player have such familiarity.

“I’m sure Coach Del Rio feels he has a pretty good handle on Derek because he’s seen him in a lot of practices and a lot of game situations,” Bisaccia said. “And Derek probably is thinking, ‘I know what Coach Del Rio may call in certain situations.’”

While there were a couple of odd exchanges between Carr and Del Rio since his tenure ended, most notably Del Rio’s critique of Carr’s cold-weather performances, Del Rio was complimentary of Carr this week.

“He’s having a good year, probably as good a year as he’s had since year two of our time being there when he really tore it up,” Del Rio said.