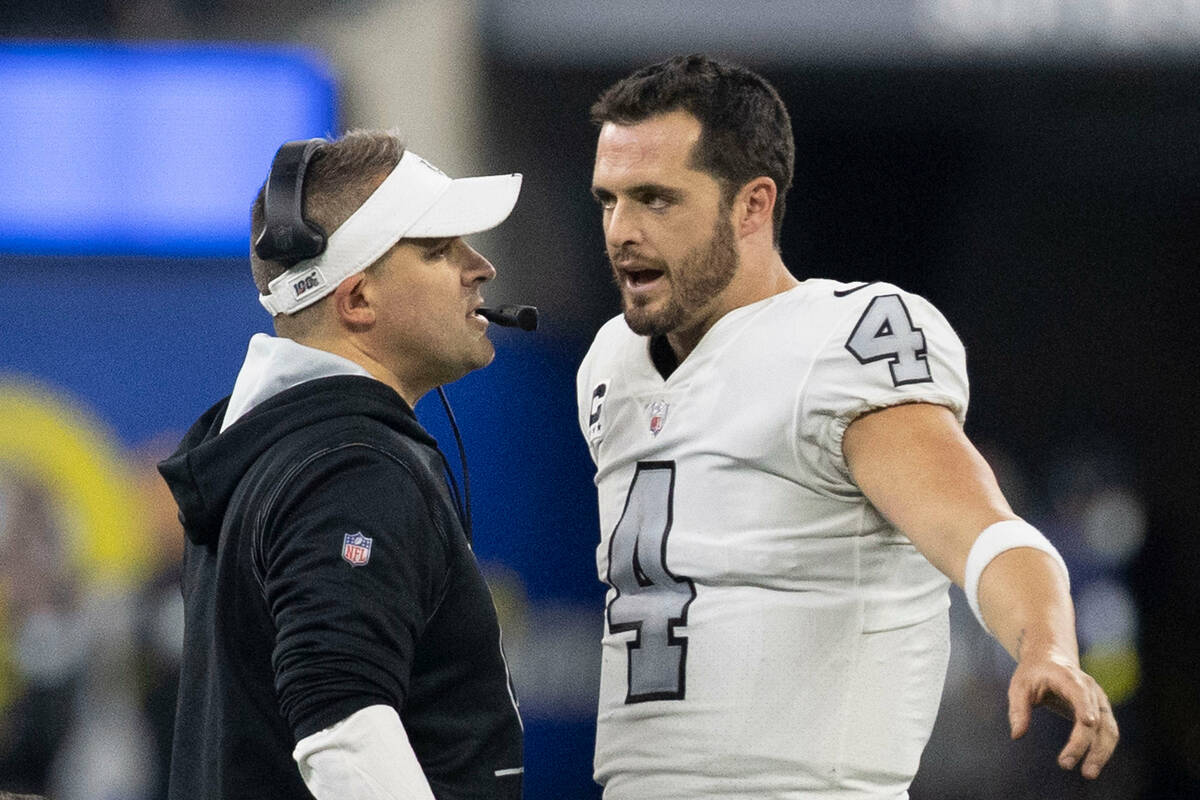 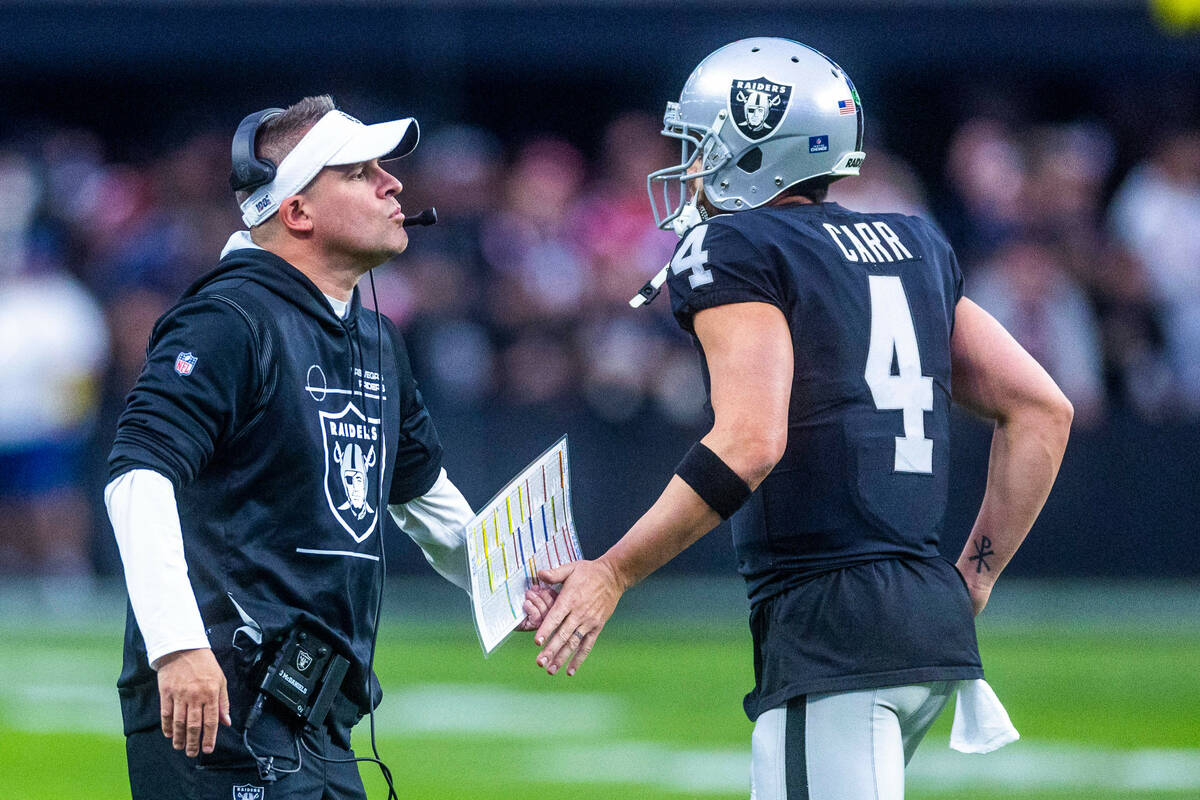 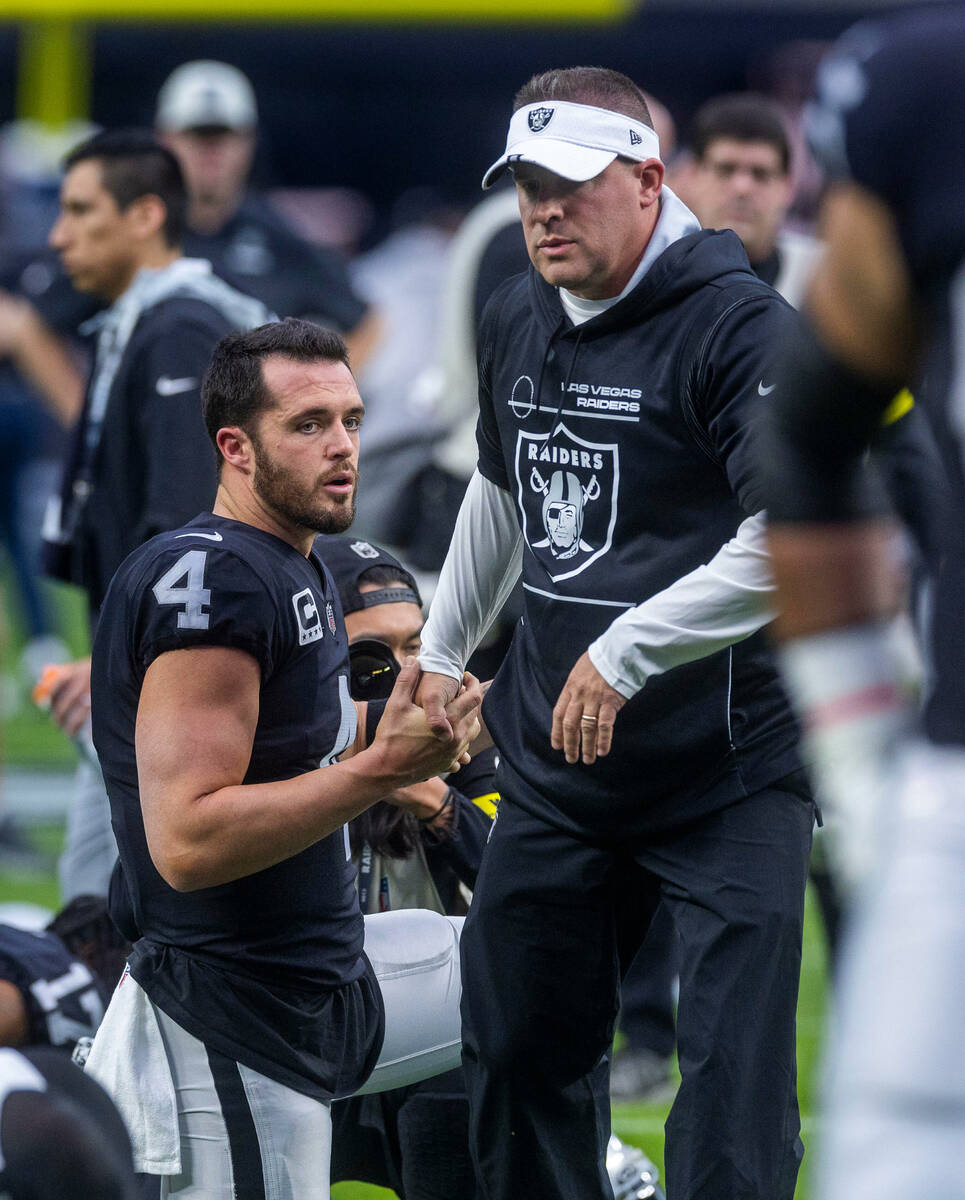 Raiders Head Coach Josh McDaniels talks with quarterback Derek Carr (4) during warm ups before the first half of their NFL game versus the New England Patriots at Allegiant Stadium on Sunday, Dec. 18, 2022, in Las Vegas. (L.E. Baskow/Las Vegas Review-Journal) @Left_Eye_Images 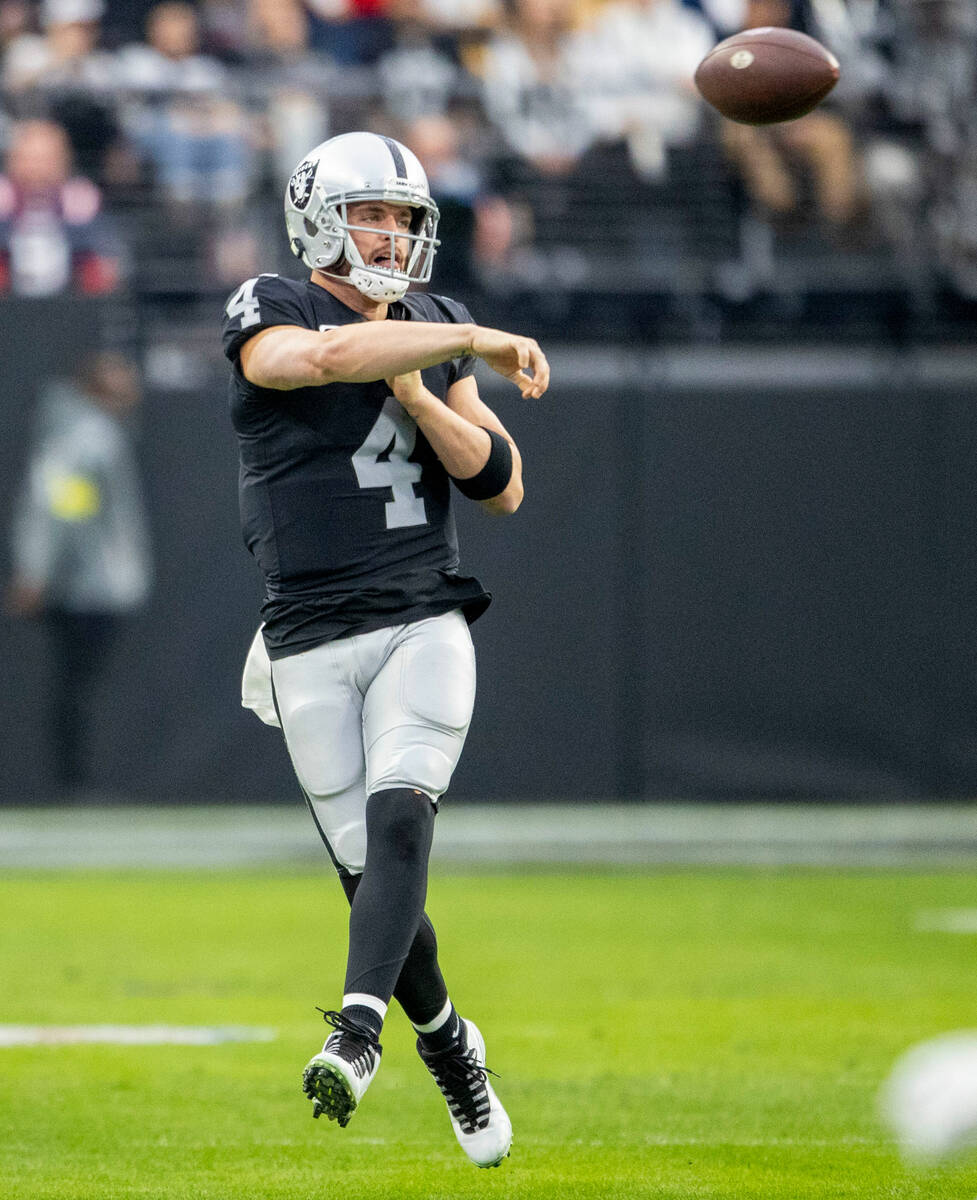 Raiders quarterback Derek Carr (4) throws on the run during the first half of an NFL game at Allegiant Stadium on Sunday, Dec. 18, 2022, in Las Vegas. (Heidi Fang/Las Vegas Review-Journal) @HeidiFang 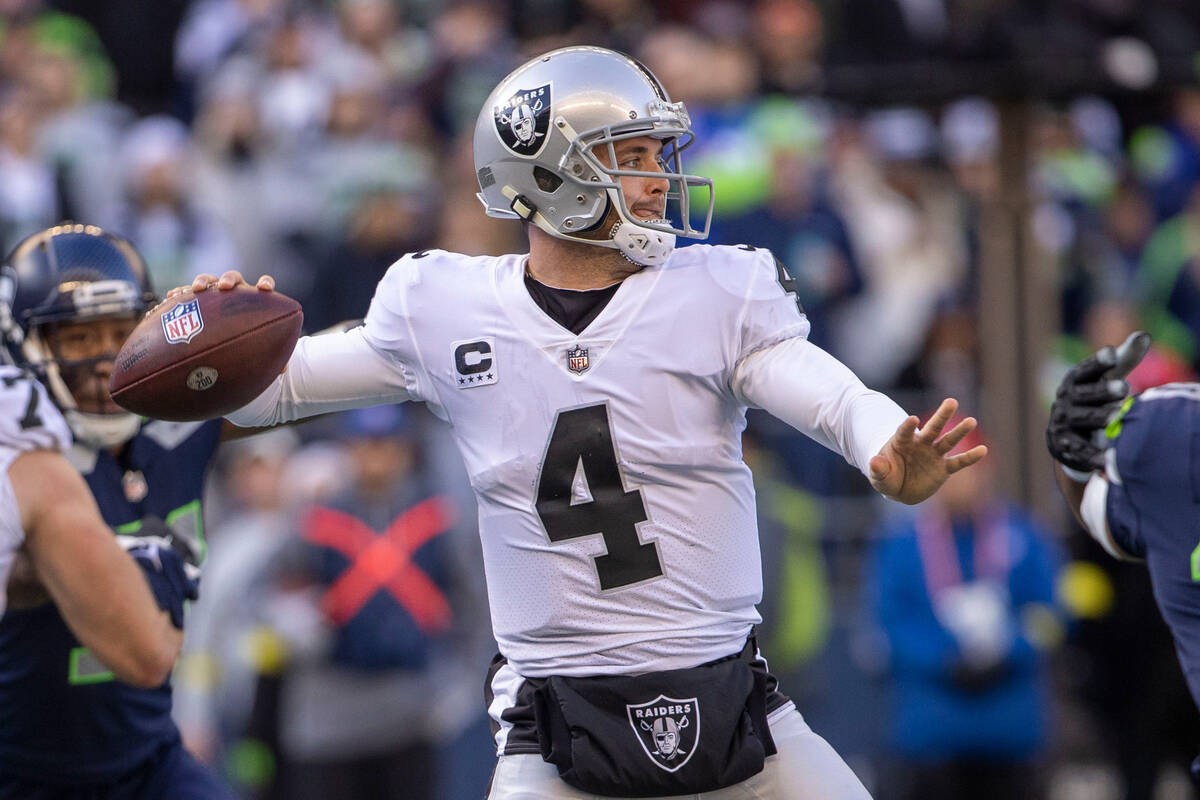 Raiders quarterback Derek Carr (4) prepares to throw during the first half of an NFL game against the Seattle Seahawks at Lumen Field on Sunday, Nov. 27, 2022, in Seattle. (Heidi Fang/Las Vegas Review-Journal) @HeidiFang

Upon signing Derek Carr to a contract extension in the offseason, the Raiders left themselves an out-clause after the season in which they could cut ties with the franchise’s longtime quarterback.

That out-clause becomes a focal point after the club benched Carr for the final two games and will move in a new direction at the position.

It raises plenty of questions about the Raiders’ and Carr’s options. Here’s some answers:

Yes, but there was nuance involved. The Raiders and Carr came to an agreement on a three-year, $121 million extension in April, but it doesn’t technically kick in until 2023. In fact, there was never any guarantee the extension would come into play. Carr played this season on the final year of a five-year, $125 million contract he signed in 2017, with the only change a pay bump to push his 2022 salary from $20 million to $25 million.

The Raiders, under new coach Josh McDaniels and new general manager Dave Ziegler, were not convinced at the time of the signing that Carr was the long-range answer at quarterback. That was obvious by the out-clause negotiated into the deal, which essentially created a one-season audition for Carr to prove himself. The obvious implication was that McDaniels and Ziegler were reserving the right to assess the situation after the season and decide whether to move forward with Carr.

How does the out-clause work?

It’s pretty simple. The Raiders have until Feb. 15 — or three days after the Super Bowl — to decide whether to keep Carr. If he remains on their roster at that point, his 2023 salary of $33 million and $7.5 million of his 2024 salary become fully guaranteed. If they cut him, the $40.5 million guarantee falls by the wayside — as does the remainder of the contract — and the Raiders are docked a $5.6 million salary cap hit in 2023.

Can the Raiders trade him?

Ideally, that’s what they want to do to bring back some assets rather than letting him walk for nothing. But there are complications.

First and foremost, Carr and his agent negotiated a no-trade clause into the new deal, so they have full control in terms of agreeing to any deal. That means the Raiders and Carr would have to work together to find a landing spot that is suitable for him.

Also, the Feb. 15 deadline poses an issue. Theoretically, the Raiders and a team of Carr’s liking can agree in principle to a trade, but per NFL rules, no trade can be officially consummated until the new league year begins March 15.

So, while a deal can be made, there is always the possibility of the other team backing out before the new league year starts — and after the Feb. 15 deadline passes — and the Raiders being stuck with Carr and the $40.5 million roster guarantee.

One way to mitigate that concern is for the Raiders and Carr to renegotiate the roster deadline to March 16 so that the Raiders can release him should a team they worked out a trade with back out.

Would Carr be willing to work with the Raiders?

That’s unknown. Obviously, there were a lot of emotions involved when Carr got benched. That’s understandable, as is the potential sentiment he might have of not wanting to work with the Raiders.

On the other hand, there are financial realities that make a trade — rather than forcing the Raiders’ hand to release him — more advantageous to him.

The trade scenario means the three-year, $121 million contract and the $40.5 million guarantee remain intact. Whoever trades for him would assume the entire agreement. And because he has veto control, almost by definition he would be going to a team of his liking.

Getting released and hitting the open market means starting fresh on a new contract. Obviously, the hope for Carr is getting a contract that matches or surpasses his current deal, but there is no guarantee that happens. So the question is, would he be better off accepting the trade or hitting the open market?

Would the Raiders be willing to lose him for nothing?

If they can’t consummate a trade, yes. The Raiders understood the dynamics and ramifications of the deal. Releasing Carr before the roster deadline gets them off the hook for the $40.5 guarantee and creates more than $29 million in cap space for 2023.