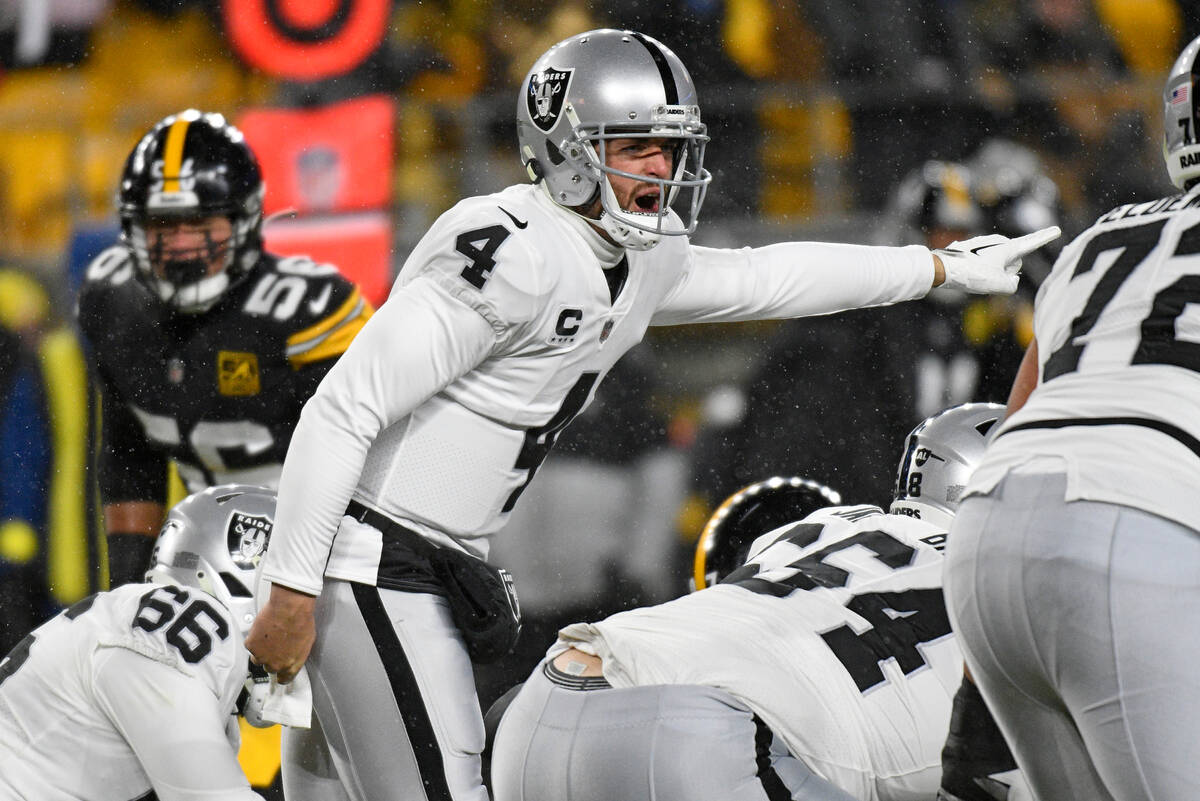 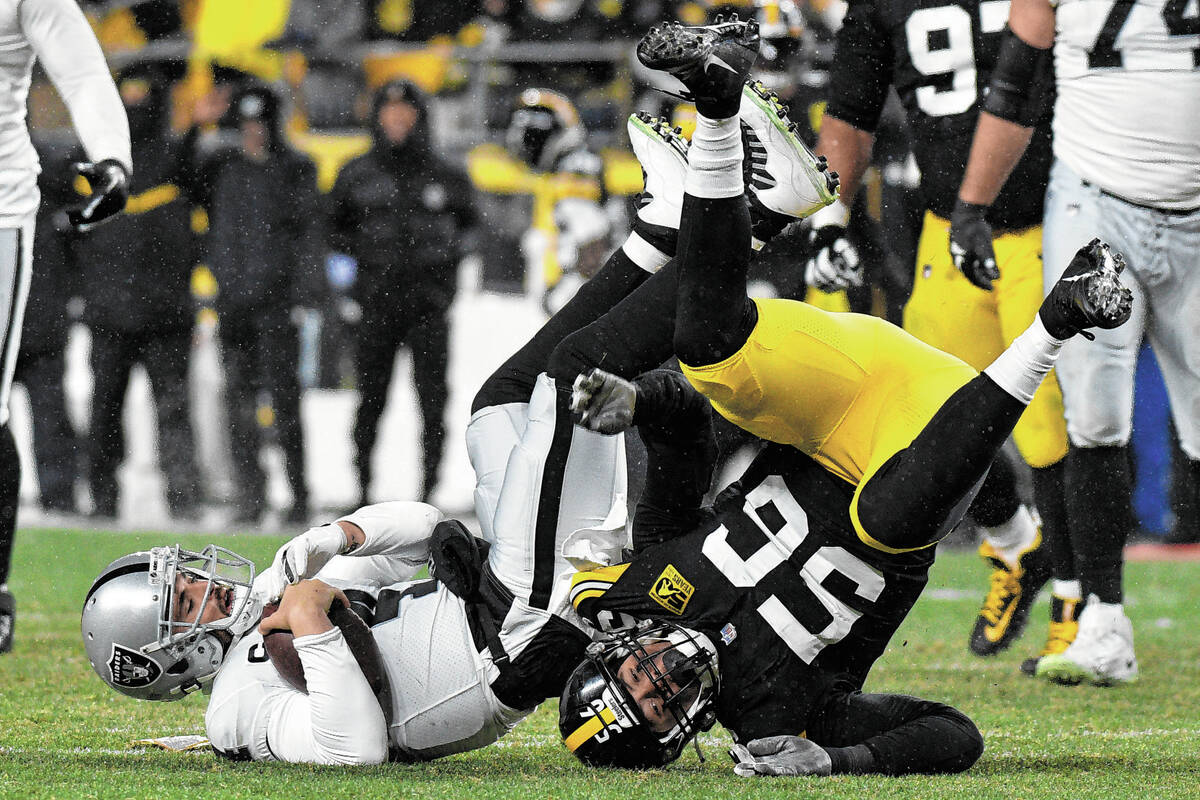 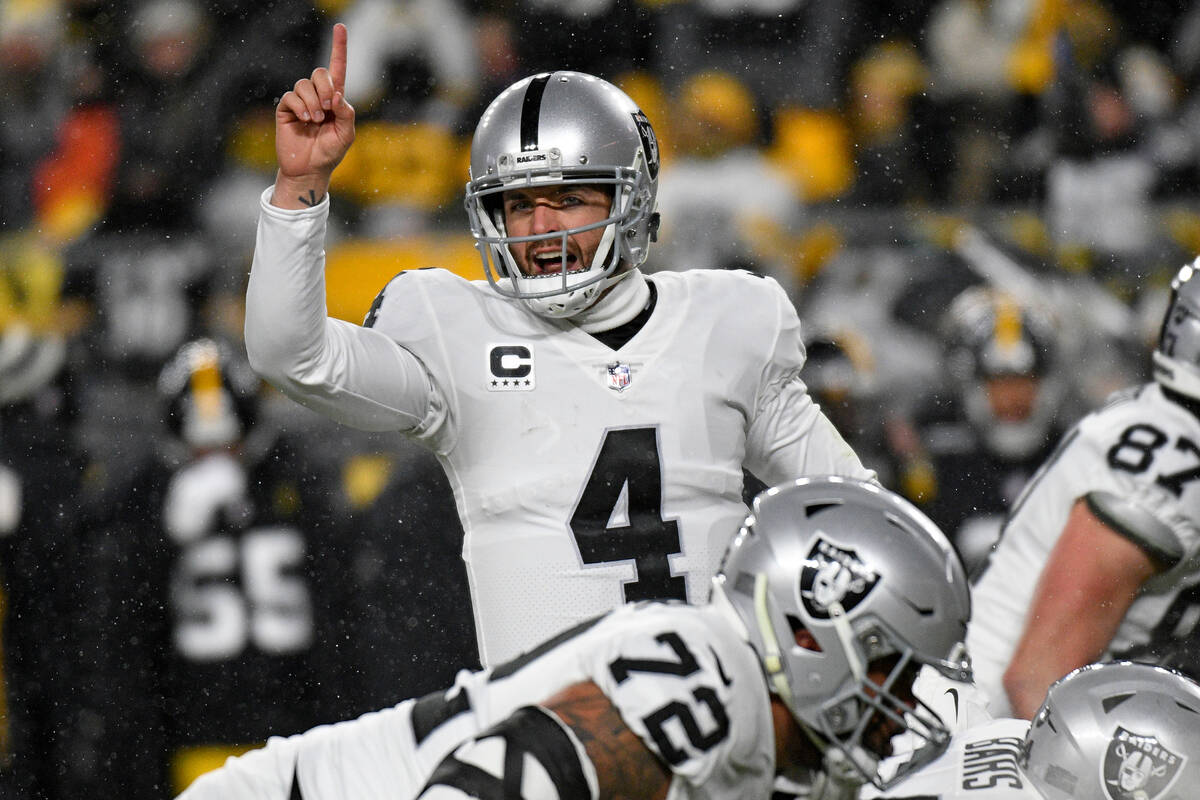 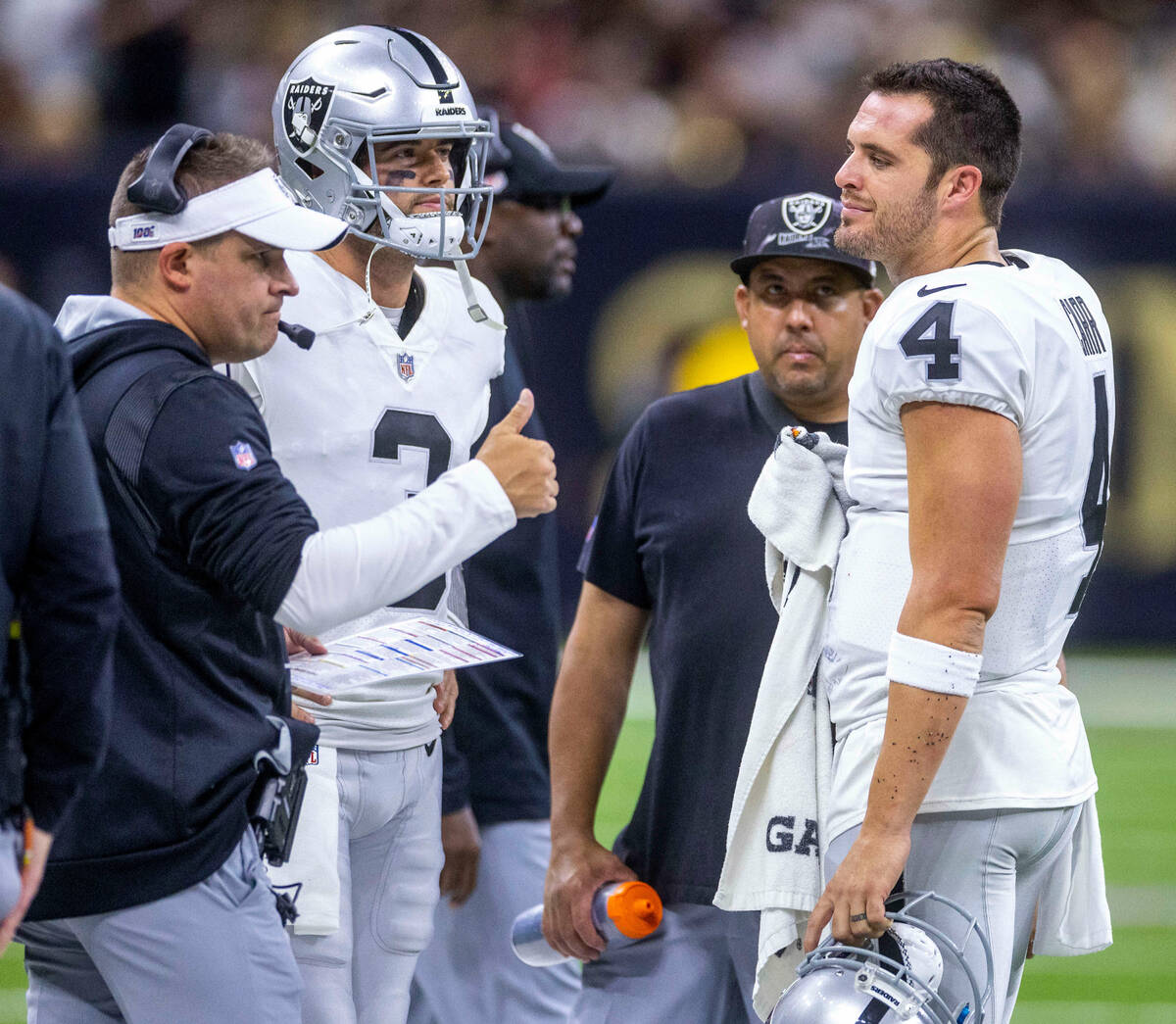 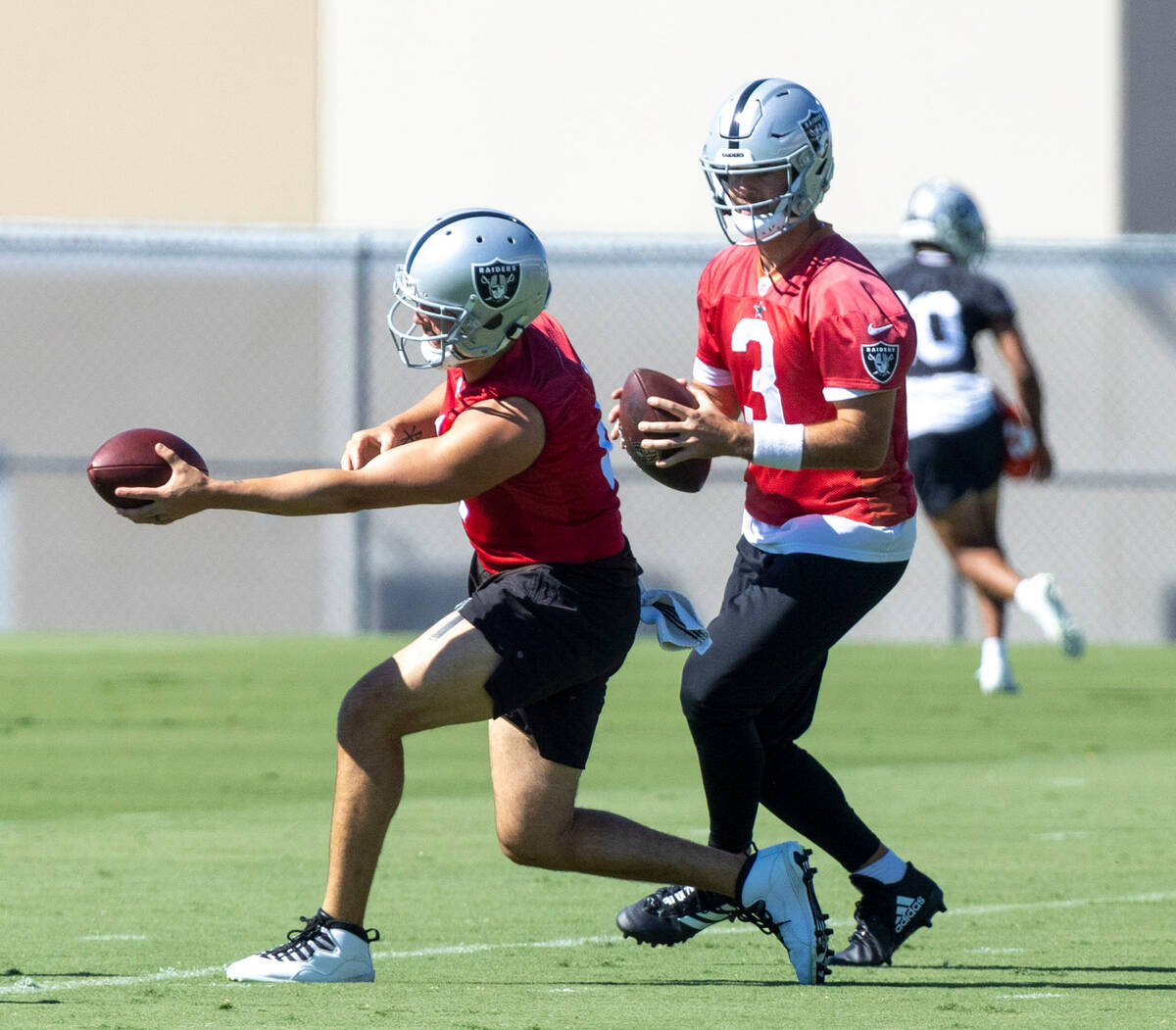 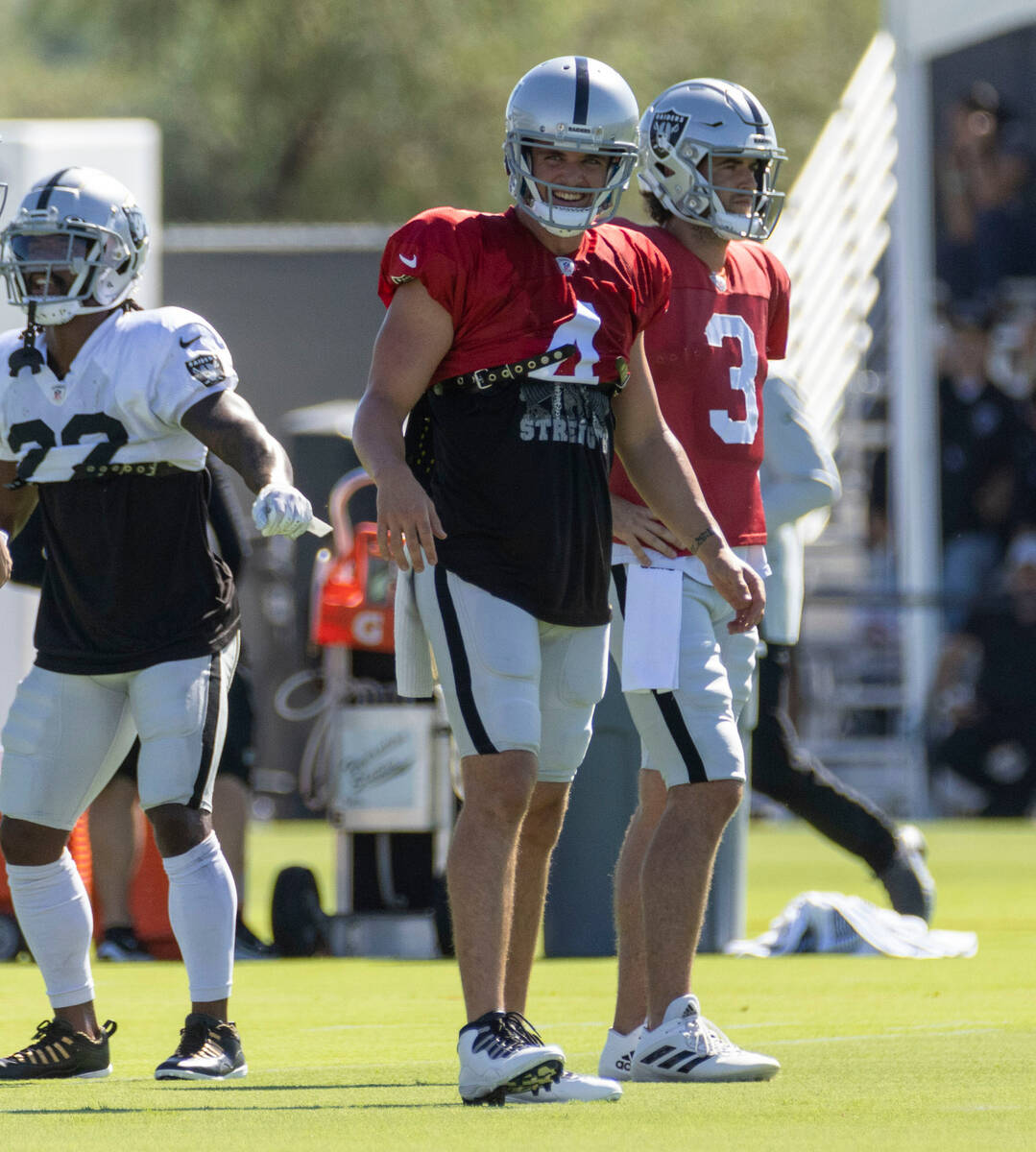 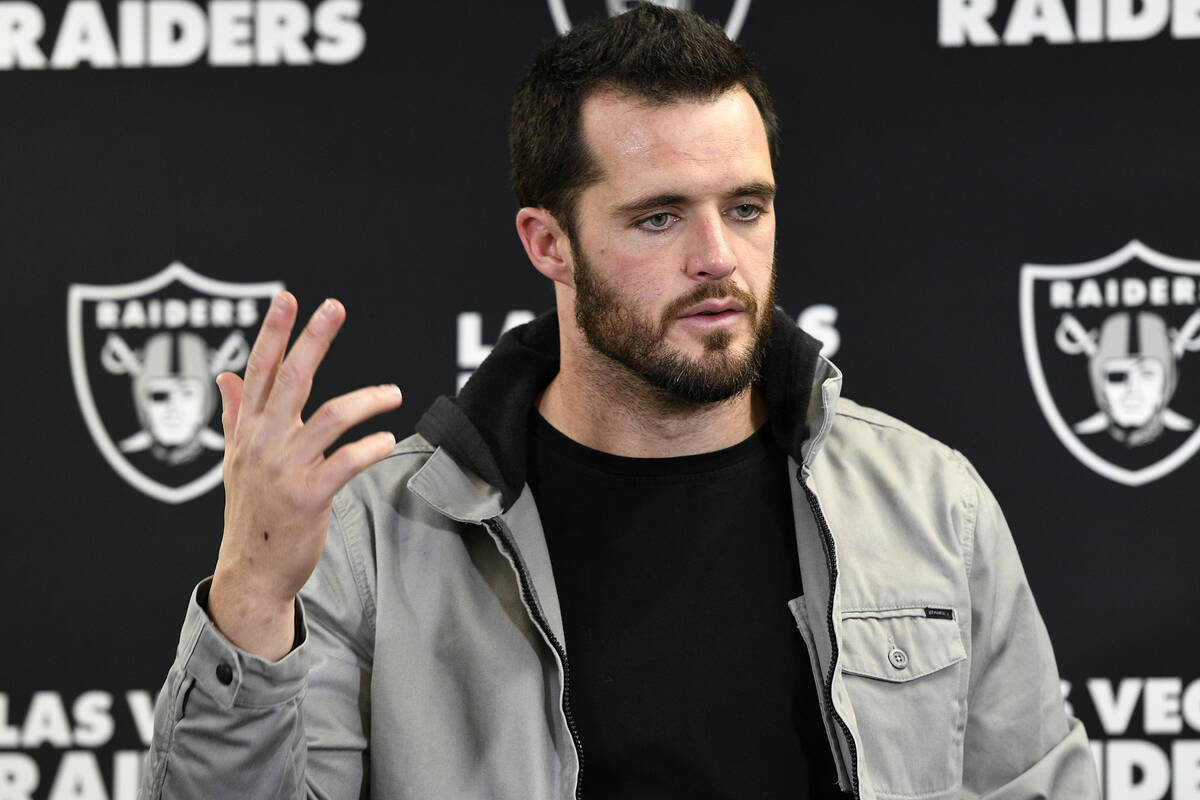 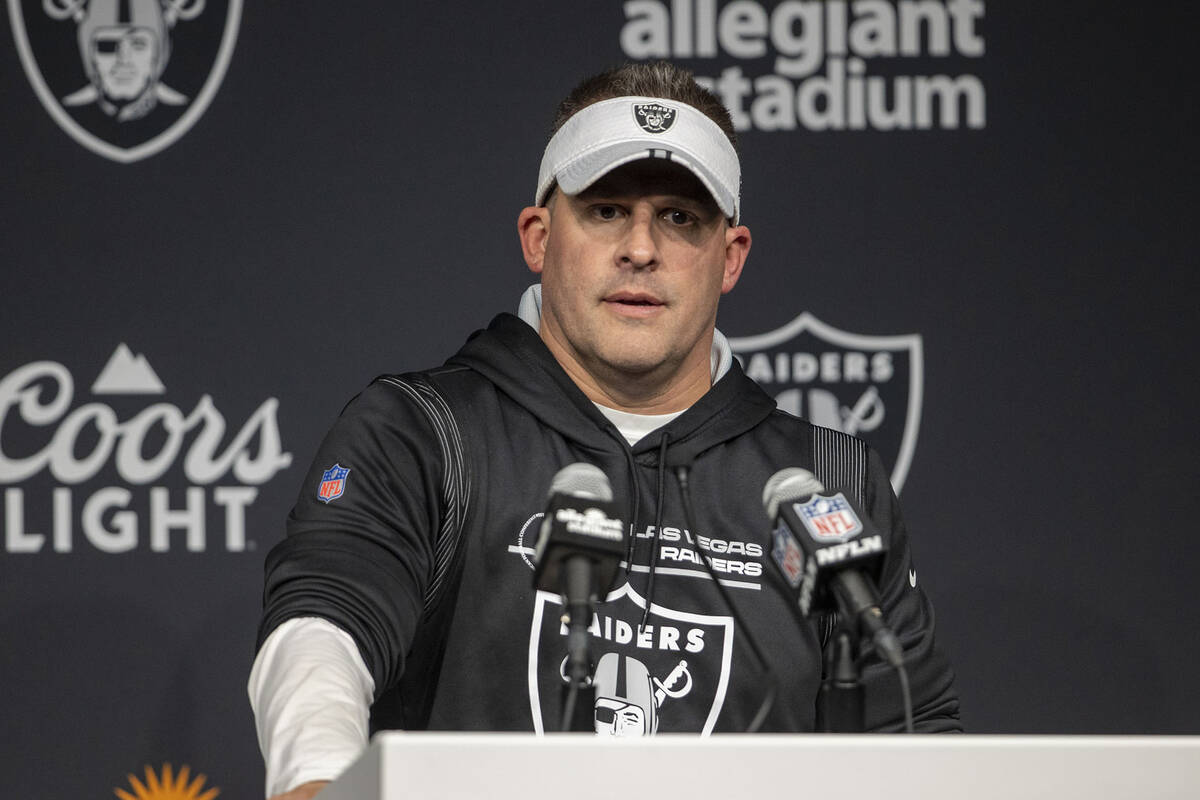 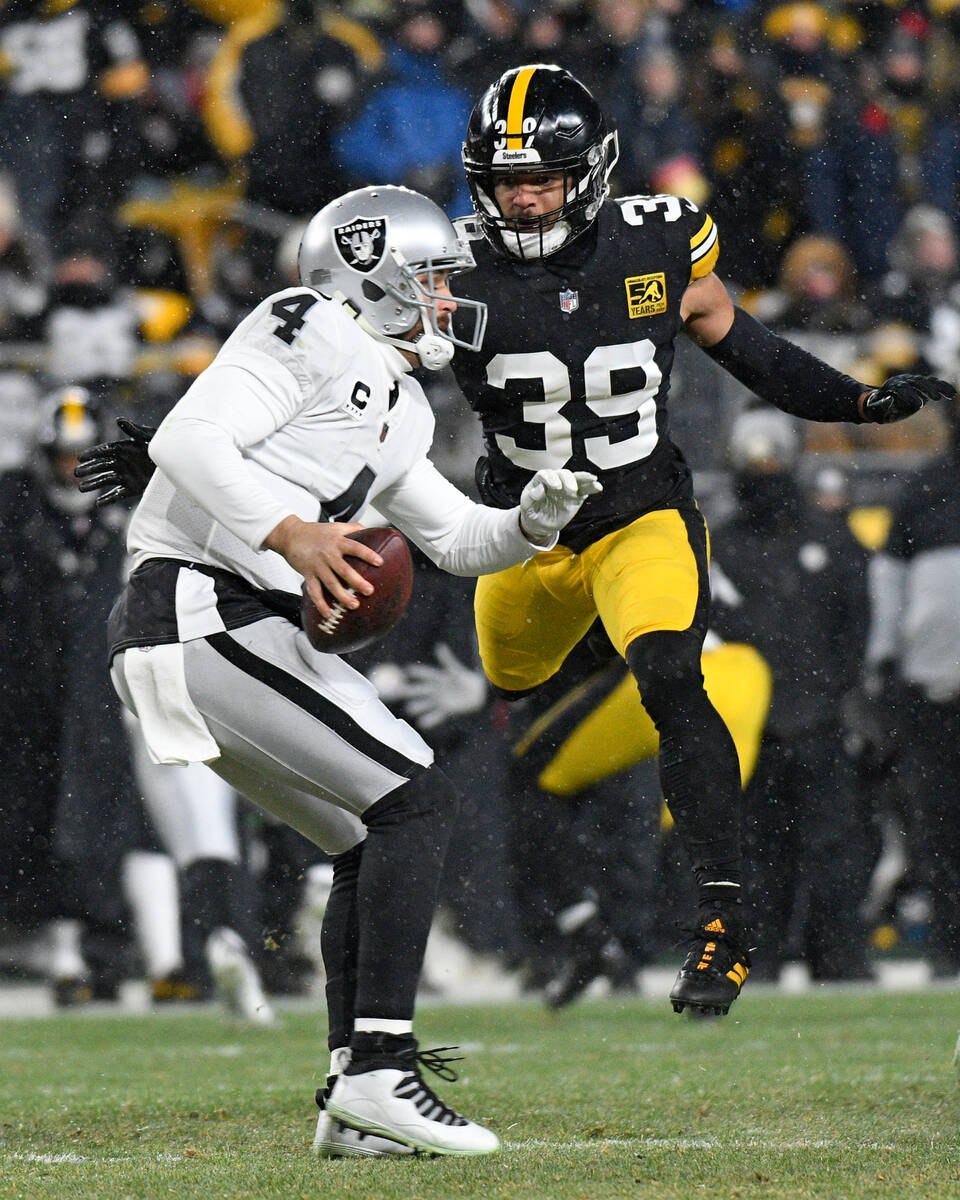 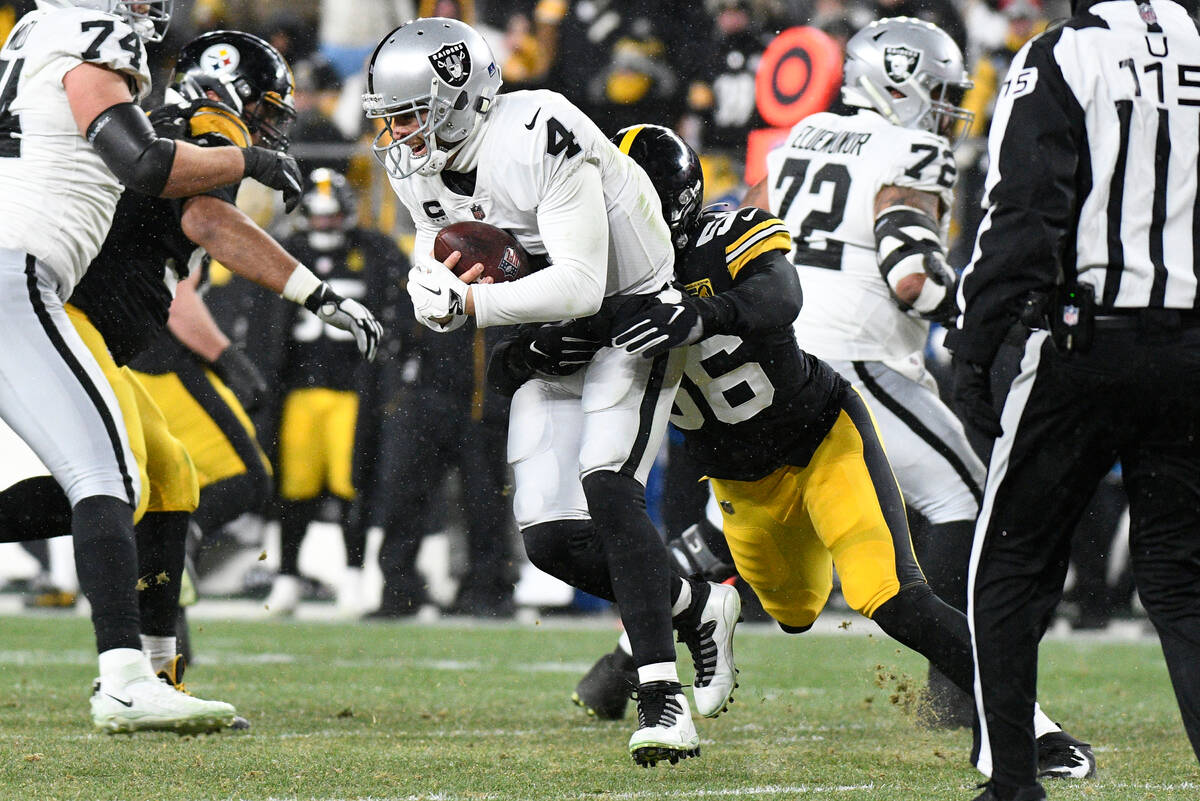 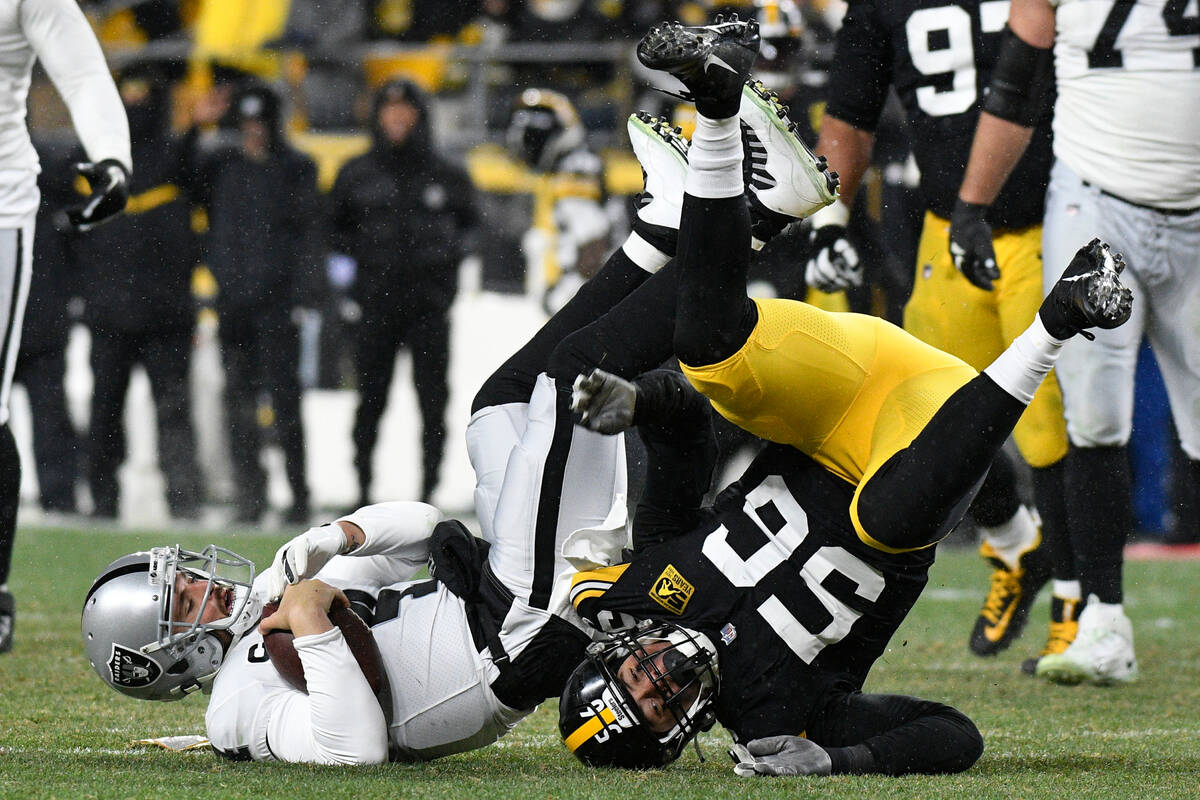 In what signals the end of quarterback Derek Carr’s career with the Raiders, the longtime face of the franchise was benched Wednesday by coach Josh McDaniels.

Jarrett Stidham will start the final two games of the season, with rookie Chase Garbers his backup, McDaniels said. The Raiders close the season with home games against the San Francisco 49ers on Sunday and the Kansas City Chiefs on Jan. 7 or 8.

Carr, 31, was informed of the decision by McDaniels on Wednesday morning. The nine-year veteran, who has made 142 starts and has franchise records for passing yards (35,222) and touchdowns (217), was not in attendance at practice and will take a leave of absence for the remainder of the season.

“Those aren’t easy conversations, but that’s the nature of the position,” McDaniels said of the responsibility of a coach to deliver such news. “I couldn’t be more complimentary of him the way he handled it. This is an A-1 class human being, and he’s obviously meant a lot to this place for a long time.”

The decision to move on from Carr — for this season and beyond — has been brewing for weeks and came to a head after he threw nine interceptions in the past five games and completed 55 percent or fewer of his passes in the past four games.

The only thing standing in the way was the official end of the Raiders’ playoff hopes. And while they are technically still alive with a 6-9 record, their chances have reached such dire straits that the risk of playing him outweighs the rewards.

This was a business decision, but one driven by performance. Having essentially made the decision to go in another direction at quarterback — with trading Carr at some point a key component to that end — the Raiders are protecting their interests and options.

The three-year, $121 million contract extension Carr signed in the offseason is structured in a way that allows the Raiders to move on from him by Feb. 15 while incurring a $5.6 million salary cap hit. If he’s on the roster beyond the February deadline, his 2023 salary of $33 million and $7.5 million of his 2024 contract become fully guaranteed.

On the other hand — and why there was urgency in making the decision to bench Carr — there is also an injury stipulation that guarantees him his 2023 salary and the $7.5 million portion of his 2024 salary if he suffers a serious injury in the next two weeks.

To preserve the ability to easily move on from Carr — be it through a trade or by releasing him on or before Feb. 15 — the Raiders decided to bench him.

His teammates seemed taken aback by the news.

“We still have a chance,” wide receiver Hunter Renfrow said. “So that’s disappointing. But I don’t get paid to make those decisions.”

Wide receiver Davante Adams, Carr’s longtime friend going back to their days at Fresno State, tried to process the development.

“Obviously I don’t think anybody was excited in here, him being one of my really good friends and the reason why I came here in the first place,” said Adams, traded to the Raiders by the Green Bay Packers in the offseason. “I wouldn’t be here right now if he wasn’t here. I think everybody knows how I feel about him.”

When asked if the move changes his feelings about being in Las Vegas, Adams said he is focused solely on the final two games.

In Carr’s place steps Stidham, who played three seasons for McDaniels with the New England Patriots and came with him to Las Vegas in the offseason. Stidham, a fourth-round pick out of Auburn in 2019, has played in 11 games and completed 32 of 61 passes for 342 yards and two touchdowns.

Stidham, 26, has made three appearances this season, with his most extensive time coming in mop-up duty against the New Orleans Saints in which he completed 7 of 13 passes for 73 yards.

“He works really hard, and he’s very bright, understands our offensive system,” McDaniels said. “And I thought that giving him a full week of seeing how this affects his preparation, his practice, his performance on Sunday, I think is a good starting point for him.”

Stidham was not made available for interviews Wednesday.

The Raiders vowed to move forward with their new quarterback while setting aside their feelings for Carr.

“It’s a reaction where you kind of have to take emotions out of it and just realize that the only thing to be productive is to support Jarrett,” tight end Darren Waller said. “And guys are excited about him getting the opportunity. We’re rallying around him, letting him know that we believe in him.”