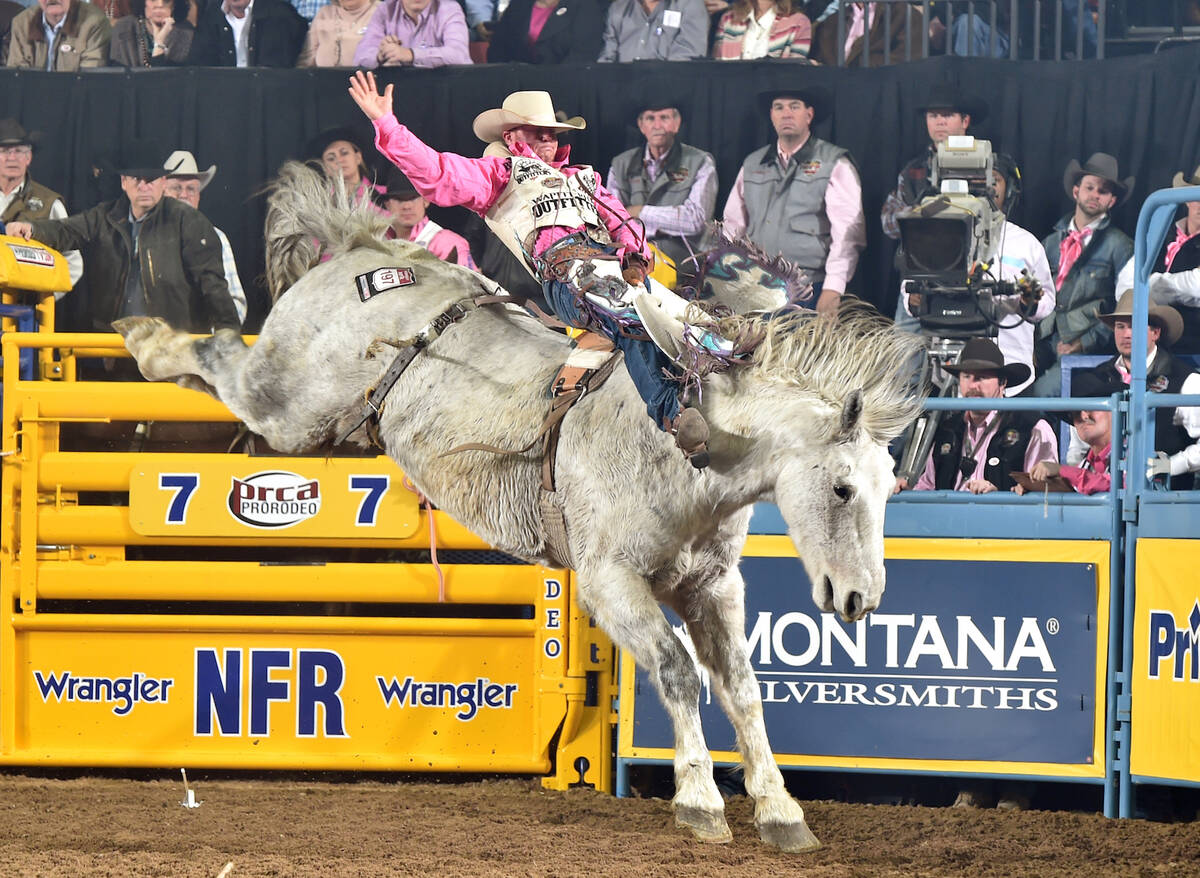 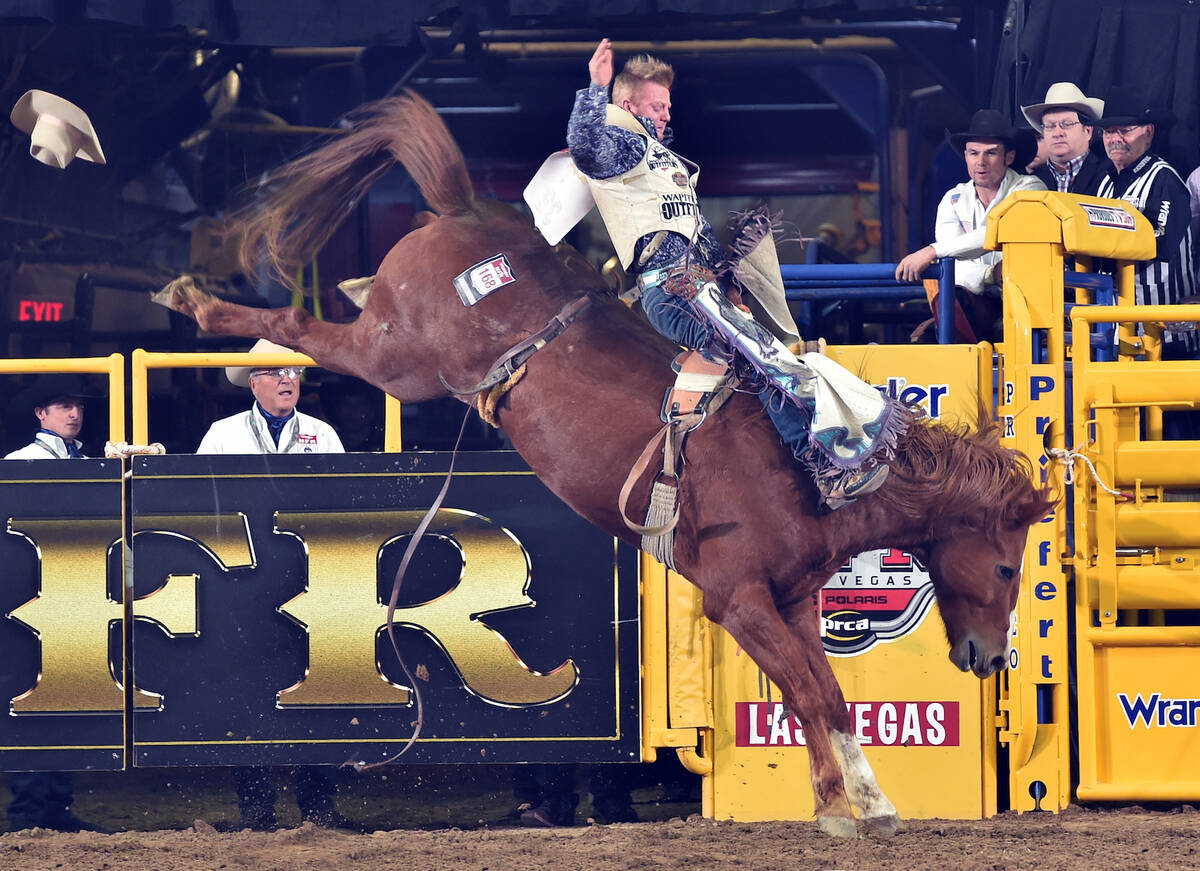 After a rodeo accident in 2018 in Texas left him with a broken back, walking on his own has been and remains the goal for J.R. Vezain, seen competing in Round 10 of the 2017 Wrangler National Finals Rodeo. With the use of robotic legs, Vezain has taken more than 100,000 assisted steps in about a year. (Dan Hubbell/PRCA)

J.R. Vezain’s phone buzzed with a number he didn’t recognize.

On the other end of the line was a voice he didn’t know. The caller was eager to talk about a conversation Vezain had more than two years ago on a podcast.

That’s how Vezain was introduced to Aaron Brookshire. It’s the moment that changed his life — again.

Team Never Quit is a podcast hosted by brothers Marcus and Morgan Luttrell. Their show spotlights individuals who have been forced to persevere through challenges to survive.

Their guests include soldiers who have returned home with major injuries suffered in war, sexual abuse survivors who have become outspoken advocates, and individuals who beat the odds of a late-stage cancer diagnosis.

In December 2020, the podcast hosts sat down with Vezain to discuss his life after suffering a broken back when a horse flipped over on him at the Pasadena (Texas) Livestock Show Rodeo in 2018.

At one point in the conversation, the hosts asked Vezain — a six-time Wrangler National Finals Rodeo qualifier — what he would be doing if the accident hadn’t happened.

“I said, ‘Well, I’m doing exactly what I’d be doing regardless of the wreck, other than I always had a dream when I was done rodeoing of getting into the reining cow horse world, the working cow horse world. When I get to walking again, that’s what I’m going to do,’ ” Vezain recalled of his interview.

Cow horse competitions test the abilities of rider and horse to precisely control cattle. Brookshire, a longtime cow horse showman and riding instructor out of Perrin, Texas, heard of Vezain’s aspirations and began asking other rodeo competitors he knew if they had Vezain’s contact info.

That March phone call turned out to be the first of a handful. Brookshire wanted to know if Vezain was serious. He needed to vet Vezain’s intensity and drive.

“I’ve run across several people that have been stuck in wheelchairs, not by choice obviously,” Brookshire said, noting their calls generally run close to two hours on average. “He doesn’t have the same attitude as anybody I’ve ever met that’s been stuck in one of those chairs.”

Father’s Day weekend in June, Vezain headed south to Perrin, about 35 miles northwest of Weatherford, to meet Brookshire in person. He went again in August with his wife, Shelby, and once more with his brother-in-law, saddle bronc rider Sage Newman, in September.

Since the accident, Vezain admits he has become acclimated to life as it has to be for now. But just because things are different or have to be done in a new way, that doesn’t mean he was willing to put his passions aside.

In a community with less than 400 people and only one gas station, Vezain found exactly what he had been searching for.

“I’m OK with how ranching works now. I’m OK with how life is. I don’t miss rodeoing. It doesn’t make me jealous or frustrated or mad or any of that,” Vezain said. “But my deepest, God-given desire and passion is horses and training them. That has frustrated me for the last four years, that the horse training side of my life looks different. I was sitting in my leather shop in March, banging my head off the walls. It was starting to get nice around here, the colts were standing outside in the yard, and I was praying, man. I was saying, ‘Lord, you have got to change my desires and passions because this is starting to really frustrate me.’

As Brookshire was vetting Vezain’s commitment and passion level in those early calls and meetings.

Make no mistake, Vezain was doing the same.

Walking on his own has been and remains the goal. With the use of robotic legs, Vezain has taken more than 100,000 assisted steps in about a year. He uses a chain hoist, like the kind mechanics use to lift an engine out of a vehicle, to get himself onto a horse.

It’s not the fastest process, but Vezain is dedicated to whatever he sets his mind to and will do whatever is necessary to make it possible. He wanted to make sure Brookshire was willing to do the same in training Vezain to be a cow horse competitor.

“After the third trip down there, I called Aaron and said, ‘My goal is to be a million-dollar rider and compete in the world’s greatest shows one day,’ ” Vezain recalled. “I said, ‘If you’re not going to coach me with those expectations to that level, then I’ll go get a new coach. He said, ‘No, we’ll just take it one bite at a time.’

“This has been that one thing since rodeo that’s given me that drive to chase something, and it came at the right time. It’s been good for my mind, good for my recovery, good for everything. I needed it.”

Brookshire asked Vezain if he had any videos of himself riding a horse — aside from the days when hanging on for eight seconds was the only goal. Team roping footage let Brookshire know that chasing a cow in an arena probably wouldn’t be an issue for the former rodeo standout. Plus, Vezain was in remarkable physical shape and clearly had the mental tenacity to compete in cow horse competitions.

Early on, Vezain made it very clear that this wasn’t going to be a pastime or off-and-on activity. In January, Vezain’s family — Shelby and 3-year-old son Ryatt — will relocate to Perrin for the winter, allowing him to train until the weather warms up back in Montana and ranch matters need to be addressed.

Brookshire is committed to the work, but isn’t sugarcoating the process. In a short period of time, the pair have developed a kinship that feels more like brothers than friends, with Vezain being the more outspoken of the pair.

Together, they’ve learned how to level each other off, which will be crucial for what’s ahead.

“The challenge is equally disheartening as it is rewarding. With your successes and your failures, you’re going to fail a whole lot more, especially when a cow is involved in two events,” Brookshire said with a laugh. “In this business, you’ve got to have that drive. You’ve got to have that self-motivation. We don’t talk about the destination, we talk about the journey.”

Vezain is back in Las Vegas this week, attending the Wrangler NFR at the Thomas &Mack Center.

This year, Vezain will be one of the loudest voices in the audience, rooting on Newman as he chases gold buckle glory.

This season, Newman has more than $250,000 in earnings to lead the saddle bronc season standings. A year after making his NFR debut and finishing 11th in the world standings, Newman is a few good rides away from possibly clinching his first world title. Newman, who has been crucial in helping Vezain with his recovery, led second-place rodeo superstar Stetson Wright by more than $60,000 heading into the NFR.

It wasn’t that long ago that the shimmer of a world or NFR buckle was Vezain’s focus. In his new quest, buckles are still up for grabs; it’ll just be a very different path to get them.

A rodeo in Texas altered Vezain’s life once. Now, he’s back in the Lonestar State looking to change things once again.

The move. The training. The successes. The failures. All of it is a challenge — and that’s what keeps him going.

“It’s different. It’s not how I envisioned it. It’s not how I pictured getting into the game, but it’s chasing the dream nonetheless,” Vezain said. “Whatever successes the Lord brings me, I’m OK with. That’s fine. But I can’t not shoot for the stars.”