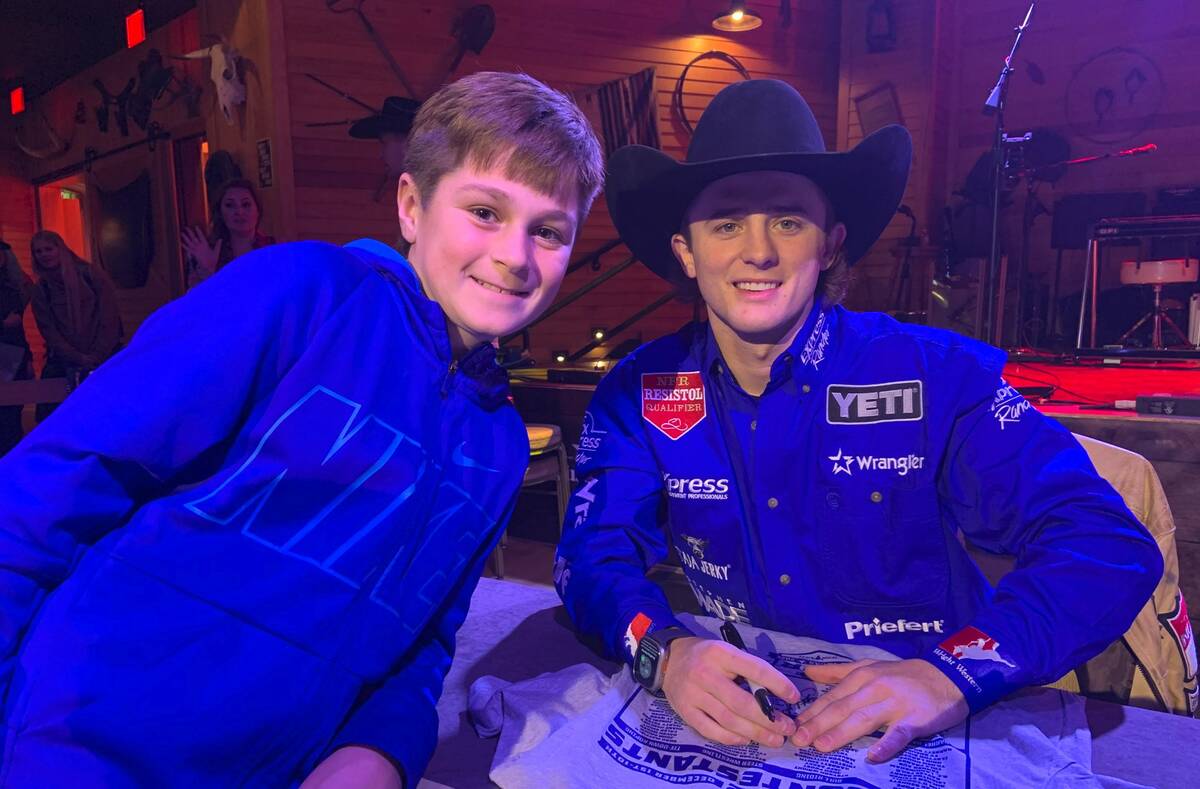 Tayton Sears, left, gets a photo with his favorite rodeo cowboy, three-time defending all-around world champion Stetson Wright. Sears, from Carey, Idaho, got to celebrate his 12th birthday Thursday by going to the Wrangler NFR bull riders autograph session at Gilley's. (Patrick Everson/Special to the Review-Journal) 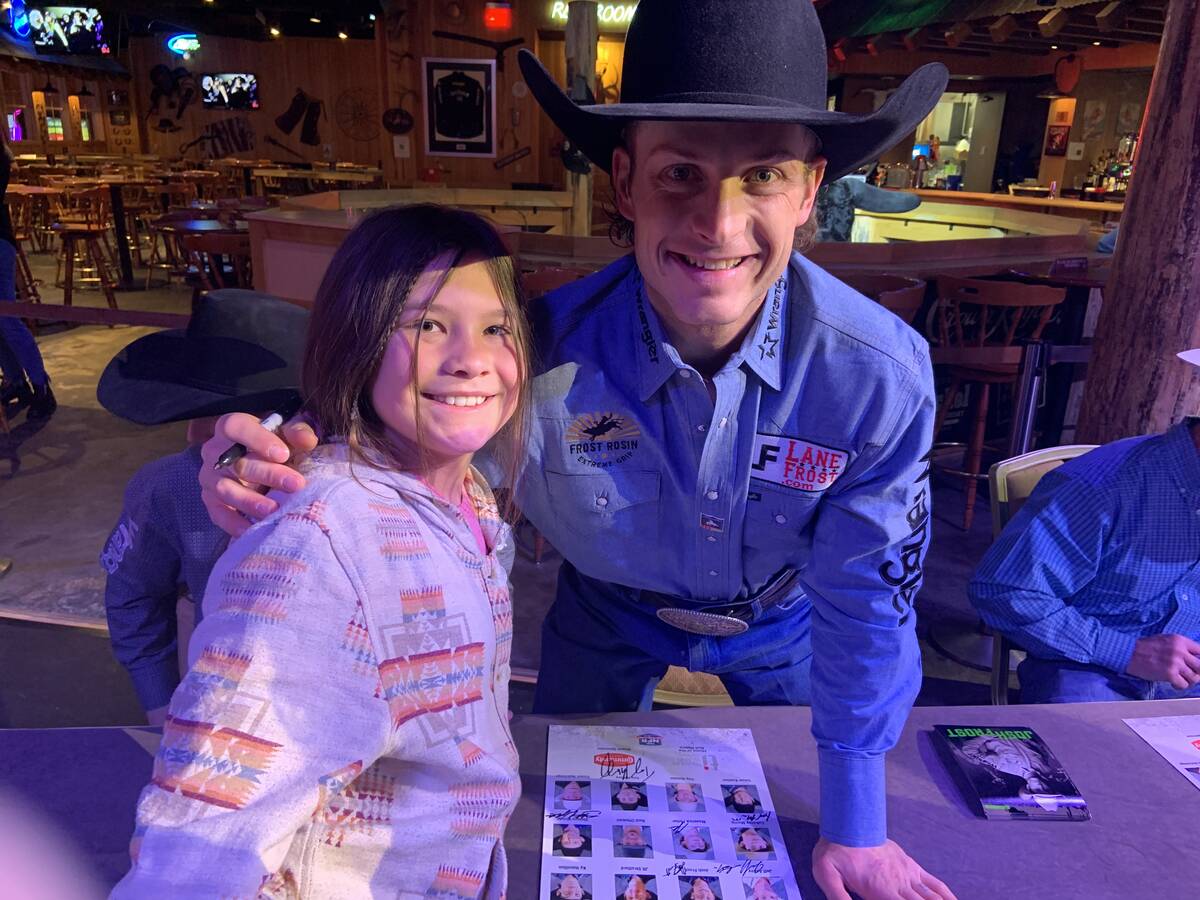 Jessie James Jensen, left, an 11-year-old rodeo fan from Boulder, Wyo., was all smiles while getting an autograph from one of her favorite Wrangler NFR bull riders, Josh Frost, during a signing session Thursday at Gilley's. (Patrick Everson/Special to the Review-Journal) 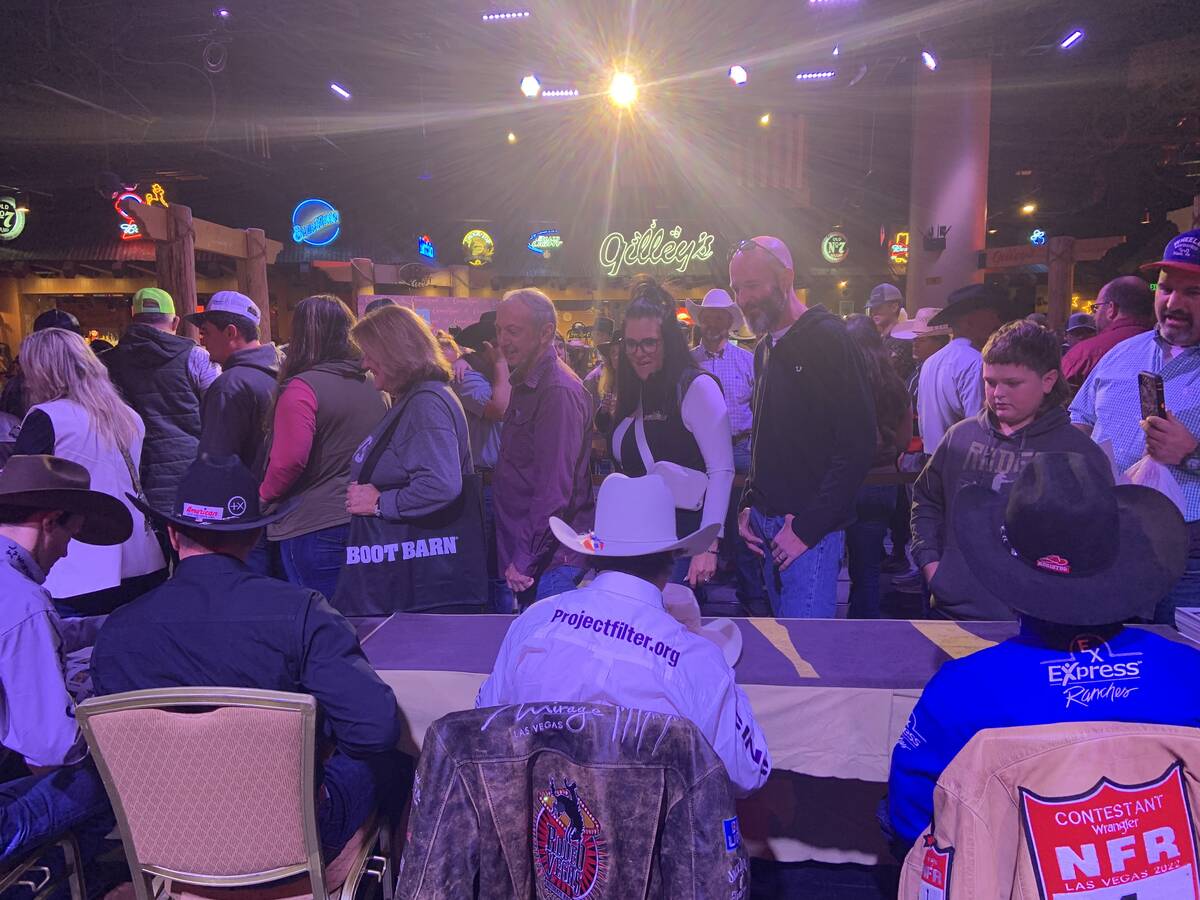 A full house of rodeo fans queued up at Gilley's on Thursday for the Wrangler NFR bull riders autograph session. Patrick Everson/Special to the Review-Journal

Tayton Sears couldn’t have received a much better gift for his 12th birthday: A trip to Las Vegas for the Wrangler National Finals Rodeo. And thanks to the daily autograph sessions, that included an opportunity to get right up close with his idols.

“When my dad told me we were going to the NFR, I was like, ‘Oh my gosh, I want to meet all those guys,’ ” Sears said.

He had to stand in a considerable line to do so, but Sears got to meet all the Wrangler NFR bull riders during an autograph session Thursday at Gilley’s, inside Treasure Island. As Sears finally reached the front of the line, the first rider waiting to sign was his favorite: Stetson Wright.

Wright stepped up to the plate by writing a special birthday message on Sears’ poster of all the NFR bull riders. Sears also had a Wrangler NFR T-shirt, which Wright signed too. And the fan-friendly Wright — who are we kidding, all these guys are fan-friendly — mugged for a photo with Sears, too.

“I was a little bit nervous. But now I’m just fine. It’s pretty exciting. Way better than I thought it would be,” Sears said.

Sears was also eager to meet the last cowboy in the line, a home-state hero in Tristen Hutchings, who hails from Monteview, Idaho.

“He’s just starting to compete with Stetson,” Sears said. “He’s one of my favorites.”

Hutchings is having a big week at the Wrangler NFR. When the rodeo began Dec. 1, Hutchings was fifth in the bull riding world standings with $137,983 in season earnings. Since then, he has stacked up almost $90,000 through seven go-rounds to boost his total to $227,756, while moving up a notch to fourth in the world.

But Hutchings welcomed the chance to get a breather from competing and meet fans such as Sears on Thursday.

“It’s great to meet these kids from all these different places. It’s special,” Hutchings said.

Jessie James Jensen, joined by her parents from Boulder, Wyo., was another youngster giddy at the prospect of meeting her bull riding idols Thursday.

“I like Josh Frost and Stetson Wright,” Jensen said, before talking more about why bull riding is her favorite event. “I like how they can hang on when the bulls are swinging around and kicking.”

As she approaches Frost, the 11-year-old Jensen is clearly a bit more eager.

“You see these guys on TV, and now you’re getting to meet them. It’s pretty cool,” Jensen said.

Frost took a moment to let Jensen snap a picture with him, then talked about what opportunities like this mean to him.

“It’s a lot of fun. We couldn’t do our job if not for the fans who come out to watch us. It’s a pleasure getting to meet all of them,” Frost said.

Frost is also having a pretty big week at the Wrangler NFR while sitting second in the world standings, behind only Wright. Frost has pocketed more than $100,000 through the first seven go-rounds and is at $341,076 for the season.

The cowboy from Randlett, Utah, is a second cousin to the late Lane Frost, a five-time NFR qualifier and world champion whose story was featured in the movie “8 Seconds.” Josh Frost can relate to fans such as Jensen and Sears, as he remembers what it was like to be on the other side of the autograph table.

“Being on this side is a reward for all the hard work,” Frost said. “I’ve been here on the opposite side. Hopefully in a couple years, some of these kids are on my side of the table, competing in the NFR.”