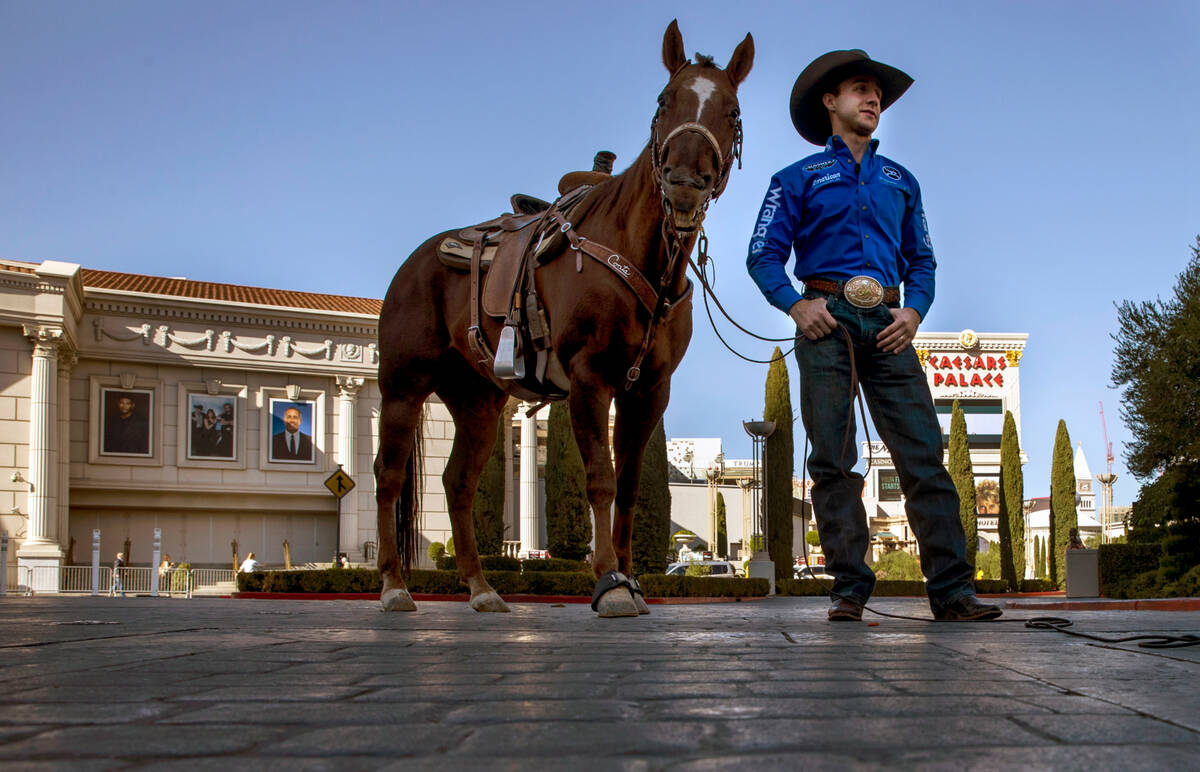 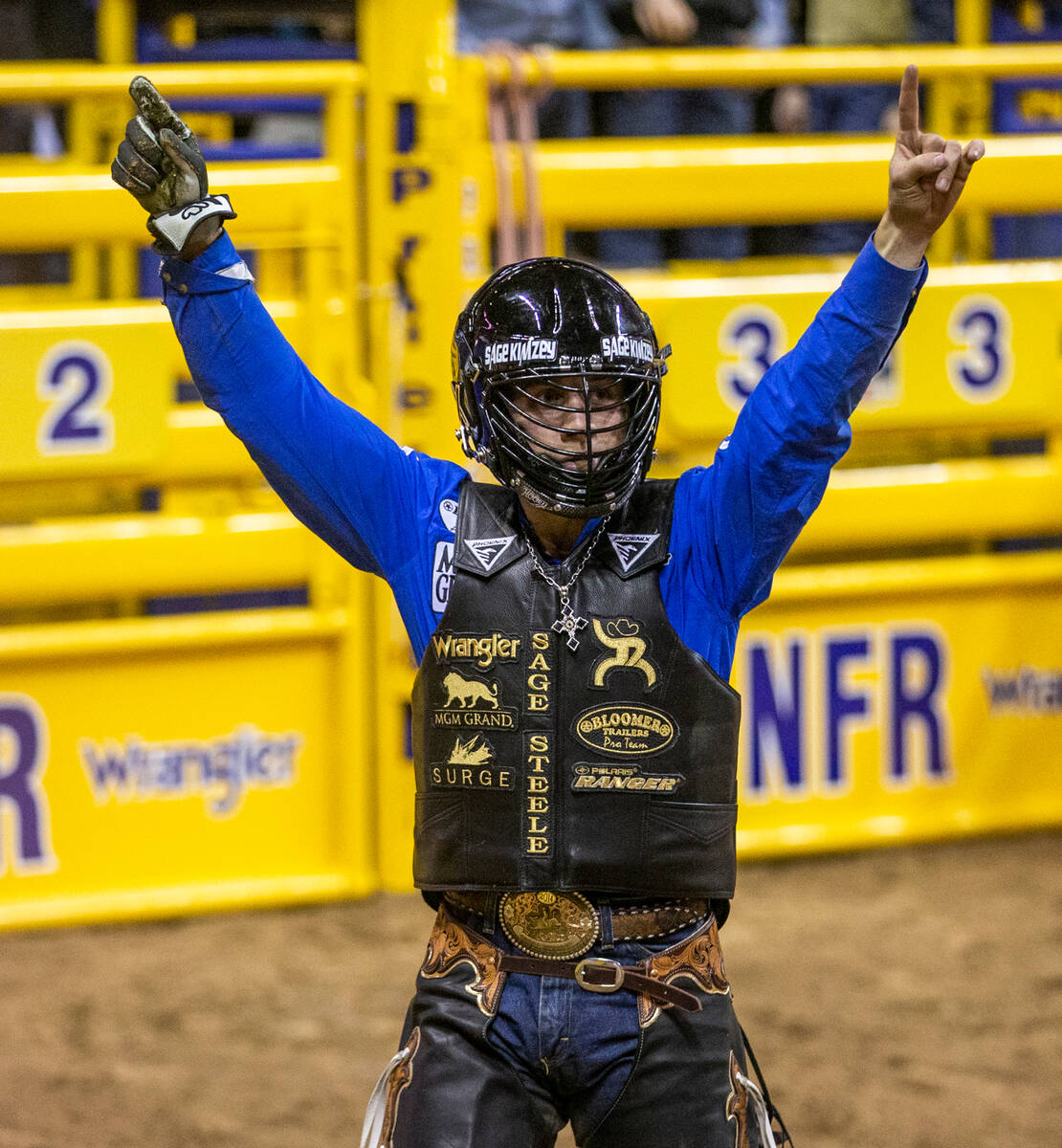 Sage Kimzey of Strong City, Okla., celebrates a great ride on Risky Business in Bull Riding during the sixth go round of the Wrangler National Finals Rodeo at the Thomas & Mack Center on Tuesday, Dec. 10, 2019, in Las Vegas. (L.E. Baskow/Las Vegas Review-Journal) @Left_Eye_Images 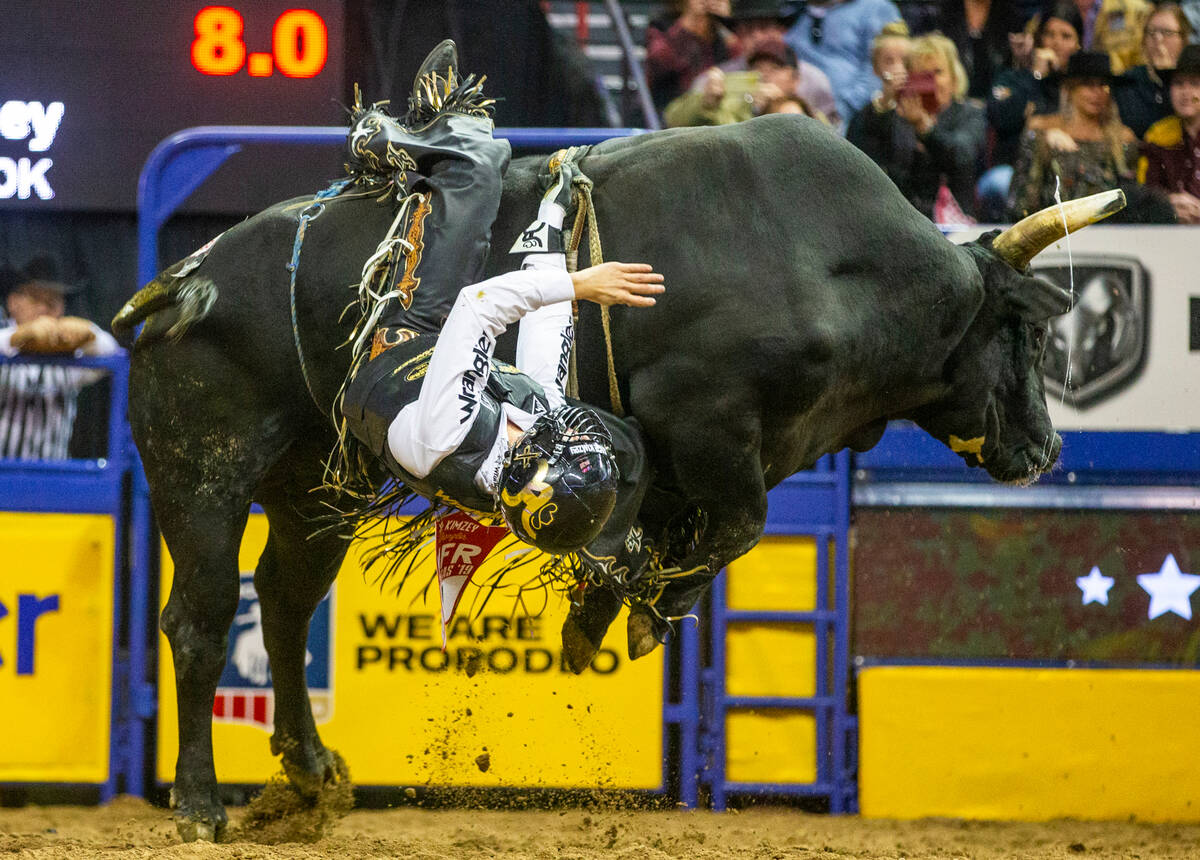 Sage Kimzey of Strong City, Okla, hangs on as he rides River Monster in Bull Riding during the tenth go round of the Wrangler National Finals Rodeo at the Thomas & Mack Center on Saturday, Dec. 14, 2019, in Las Vegas. Kimzey was named the Bull Riding World Champion. (L.E. Baskow/Las Vegas Review-Journal) @Left_Eye_Images

It’s kind of like that whole “if a tree falls in the forest” bit. If a Wrangler National Finals Rodeo takes place, and Sage Kimzey isn’t in it, did it really happen?

The answer, of course, is yes. This Super Bowl of Rodeo stops for no one, and there’s never a shortage of great cowboys and cowgirls who ply their trade for 10 days each December in Las Vegas.

But it certainly has felt different this week without Kimzey, who reached the Wrangler NFR from 2014-21 — each of his first eight seasons — and won seven bull riding world championships.

Being honest, though, Kimzey is surprised it took this long to miss out, as a shoulder injury suffered years ago finally caught up to the 28-year-old.

“I actually tore it up in high school and never really knew how bad it was,” Kimzey said. “It got slammed pretty hard in March. Fast-forward from there, it actually came out of the socket in the middle of June, in the middle of a ride at Weatherford, Texas.

“As soon as it happens, you just know. Then learning how torn up it actually was, that was interesting.”

Indeed. A decade of wear-and-tear led up to the final straw that ended Kimzey’s season.

“The doctors were blown away that I was able to have my success with the way my shoulder was,” he said. “I had a totally torn front rotator cuff. They had to replace my biceps tendon and put a bone graft in on my glenoid head. I had a broken collarbone. Pretty much everything that could be broken was.

“There wasn’t really a conversation about it. It was pretty well understood that it was gonna be the end of my 2022.”

To reiterate, some of that damage was there before his season-ending ride, for years in fact. Yet Kimzey was performing as well as ever.

“I was probably having the most successful little stretch that I’ve ever had in my career. I won $117,000 from 11 rodeos,” he said. “I won pretty much every rodeo I went to.”

But some of those rodeos were not ones that counted toward Wrangler NFR qualifying. In official PRCA earnings, Kimzey was at $88,937. That’s still an impressive haul before the season hits the lucrative Fourth of July stretch.

In fact, it was almost enough to qualify among the top 15 and earn a return trip to the NFR. When the season finished up at the end of September, Kimzey was 17th in the world, just $9,000 or so out of 15th, despite having not competed in more than three months.

“Maybe. It would be like a super-big maybe. But I probably wouldn’t have,” he said. “Recovery time is six to eight months to ride bulls again and be able to withstand the force. But this is probably the last fix for it, so I would’ve stayed home and gotten the shoulder right. That takes precedence.”

Plus, as it turned out, Kimzey had far more important matters to tend to. In January, wife Alexis gave birth to the couple’s first child, son Steele. All of a sudden, just a few months into Steele’s life, a bunch of time off from work was a pretty good fate.

“This is the silver lining, getting to spend time with my son in his first year. That’s pretty special,” Kimzey said. “I love bull riding, but at the end of the day, with my young family, being able to pick up my son is more important.”

That’s not to say he isn’t missing the thrill of 18,000 full-throated rodeo fans cheering him on at the NFR.

“There’s a lot of emotions that go into it. I guess in the back of my mind, I knew I couldn’t go the entirety of my career without getting my shoulder fixed,” Kimzey said. “Yes, I’d love to be competing. But I knew for a long time this was coming.”

And again, if one must have his entire shoulder/arm/collarbone ravaged, well, the timing couldn’t have been much better.

“I told Alexis, ‘I’m just going to enjoy this stage of life right now,’” Kimzey said. “There’s no point in being miserable about something that wasn’t an option. It’s actually been a huge blessing, not nearly as bad as I thought it would be. For me, with the birth of my son, there wasn’t a void, because he’s filled up my life so much.”

Still, Kimzey has been in Vegas all week for the NFR and ancillary events. He’s just more involved with family than competition this time.

“It’s the NFR. If you’re a rodeo cowboy, you want to be there, whether you’re competing or not,” Kimzey said, while reminding that brother Trey Kimzey is competing in bull riding this week.

“My little brother qualified again, so I get to go out and be a fan for 10 days. I’ll be spending time with my family and enjoying all of it as a fan — the rodeo, Cowboy Christmas, all that.

“I’ll be living the normal, stress-free life in Las Vegas that we don’t usually have the luxury to enjoy.”