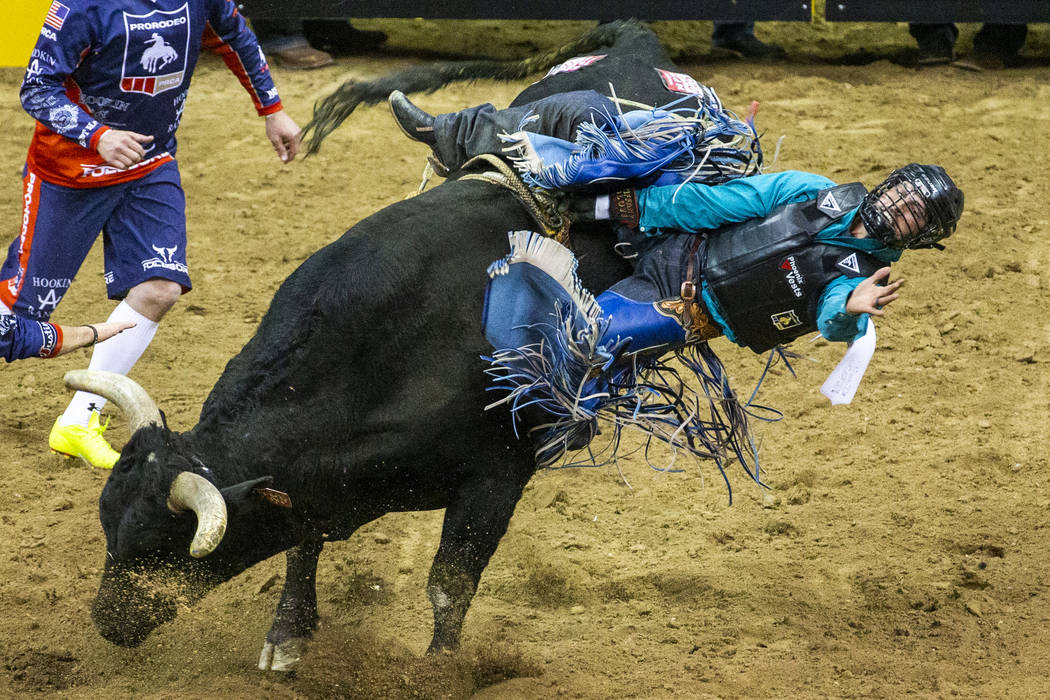 Tyler Bingham of Honeyville, Utah, gets sideways on Night Moves in Bull Riding during the fourth go round of the Wrangler National Finals Rodeo at the Thomas & Mack Center on Sunday, Dec. 8, 2019, in Las Vegas. (L.E. Baskow/Las Vegas Review-Journal) @Left_Eye_Images 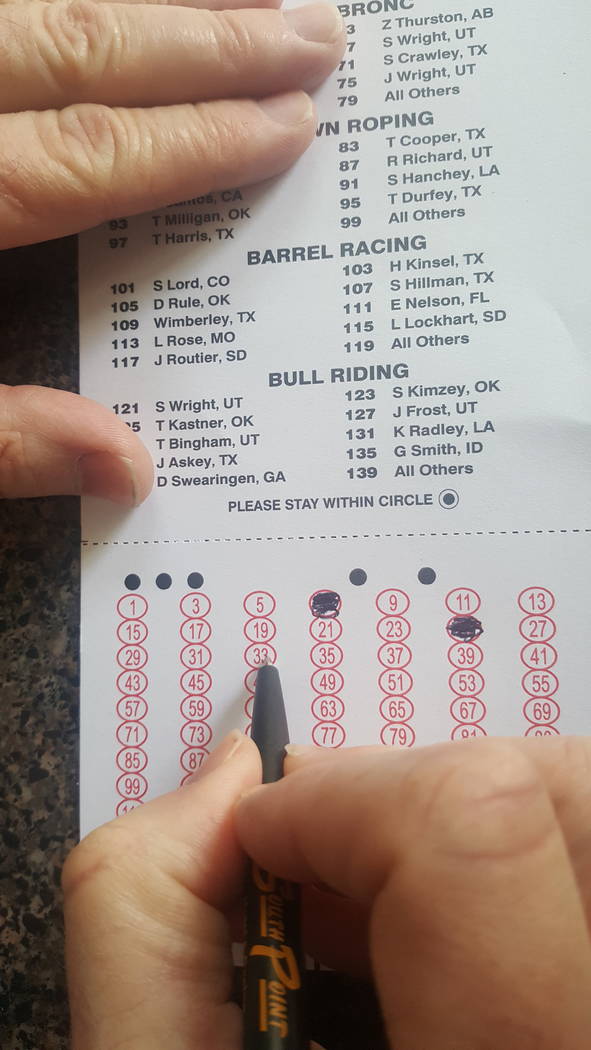 The South Point sportsbook now offers a $5,000 Daily NFR Jackpot Card, on which bettors try to pick the nightly winner of each event. Contestants can enter as many cards as they'd like, at $10 per card. The person with the most correct picks wins the nightly cash prize. Patrick Everson/Las Vegas Review-Journal 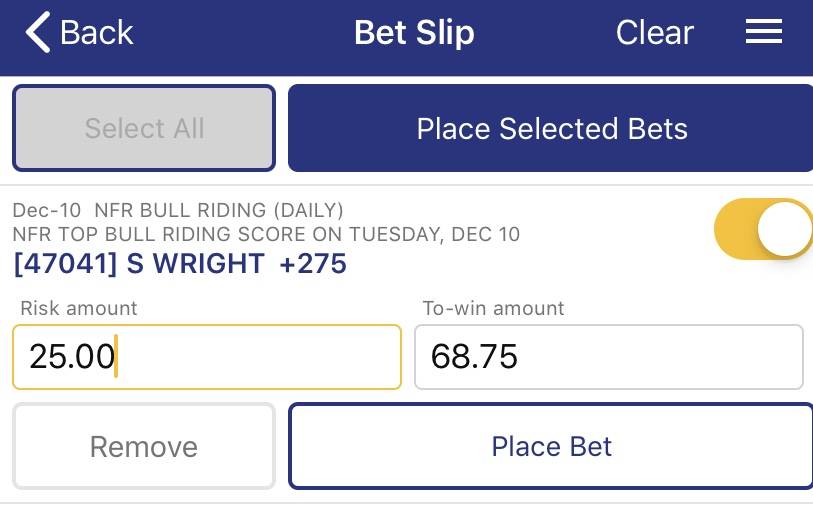 Circa Sports, located downtown on Fremont Street inside The D Las Vegas and the Golden Gate, is offering bull riding on its betting board during the Wrangler NFR. Bettors can place wagers at the counter or on Circa Sports' mobile app, if they have a mobile account. Patrick Everson/Las Vegas Review-Journal 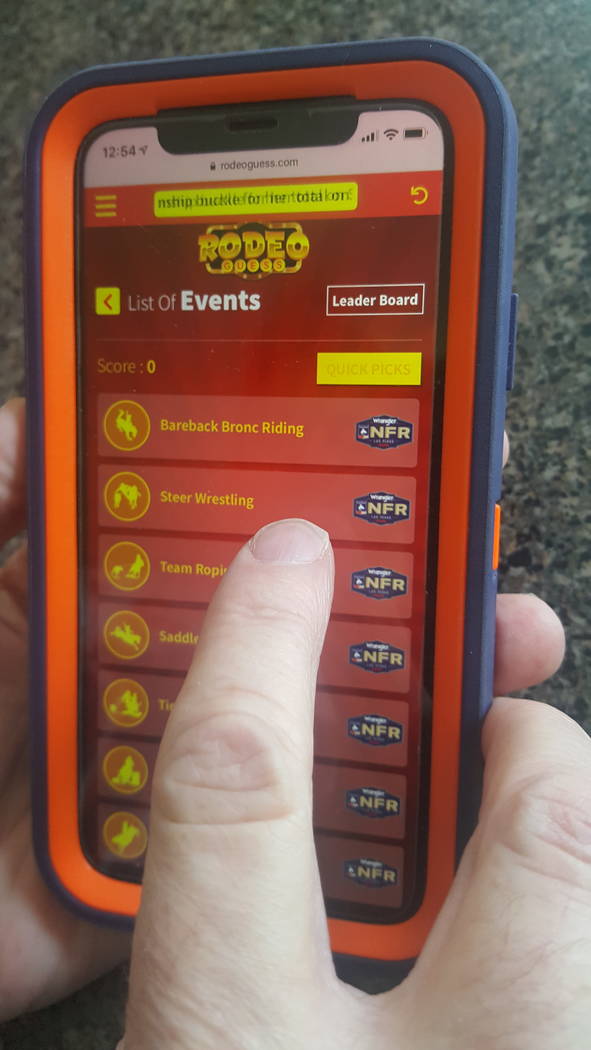 RodeoGuess.com gets Wrangler NFR fans in on the action each night. Entrants try to predict the winning times/scores for every contestant, with prizes for contest winners in each event and for the entrant who gets the most total points across all seven events. Patrick Everson/Las Vegas Review-Journal

Rodeo fans tend to be sports fans in general, too. As such, there’s certainly a segment of the rodeo fan base that might also enjoy sports betting. So it’s no doubt appealing to have a little skin in the game as fans watch these riders, ropers, racers and wrestlers during the Wrangler National Finals Rodeo.

More sportsbook operators in Las Vegas are starting to pick up on that. For years, MGM Grand Resorts books offered betting on the bull riding for each of the 10 go-rounds at the Thomas & Mack Center. This year, the new Circa Sports operation downtown also has bull riding on the betting board.

And the folks at the South Point sportsbook have gotten really creative, launching their $5,000 Daily NFR Jackpot Card. It’s ostensibly a $10 parlay card, with bettors trying to pick the winners in each of the seven nightly events. Except that unlike traditional sports parlays, you don’t have to get all seven correct. The entrant with the most correct picks – three or four correct picks will have you right in the hunt – collects the $5,000 prize.

“It was Michael Gaughan’s idea,” South Point sportsbook director Chris Andrews said, deferring credit to the hotel owner, who has been on the Wrangler NFR board for decades. “We just had to figure out the technical aspects of it.”

Which was no easy chore.

“We had some challenges. You’ve got multiple selections for each event. It’s not a typical parlay card,” Andrews said, admitting he’s not the technology wiz behind the sportsbook counter. “I just drew up some ideas. Between myself, Tom Blazek and Jeff Myers, we figured it out. Tom and Jeff really did all the technical stuff.”

Entries fluctuated over the first few days, peaking at nearly 300 tickets for Saturday’s third go-round. But even with 300 entrants, that equates to great value – a $5,000 prize for a contest that, at $10 per card, collects $3,000 in entry fees. And there’s no limit on the number of entries.

“Michael Gaughan and I said, ‘Why not do a limited liability parlay card?’ ” South Point general manager Ryan Growney said. “There’s great value in it, and everybody who’s got a card, they’re watching the rodeo intently.”

And again, you don’t need to go 7-for-7, or even close to that. In Thursday’s first go-round, four entrants tied for first by correctly picking four winners, so each received $1,250. Friday, three entrants tied by going 3-for-7, so each received $1,667. Sunday saw two winners get four correct, for $2,500 apiece. There’s been a solo winner three times, Saturday with a 4-for-7, Monday with a 3-for-7, and Tuesday with the high score of 5-for-7, with each winner getting the whole $5,000 prize.

“A lot of people think it’s too good to be true, and they assume you have to pick all seven correct. Which you don’t,” Growney said. “The winners are getting three to four events right per night.”

The South Point has made it easy, too, with entrants able to put their tickets in at the sports betting counter or on computer kiosks, which are located at the nightly viewing parties around the property and at the South Point Arena.

A few miles north, downtown on Fremont Street, Derek Stevens – owner of The D Las Vegas and the Golden Gate – and his Circa Sports team have been thrilled with the reception to bull riding offerings this week.

“We’ve been a sponsor of the NFR for a number of years. This is the first year we’ve been in the sports betting business, though, so we decided to put all 15 bull riders up, all 10 days,” Stevens said. “It’s a helluva lot of fun to watch these bull riders when you have a ticket in your hand. There are a lot of high-payout long shots.

“We’ve seen tremendous growth through the week. It’s literally gone from nothing to something.”

If you’re not here in Vegas or are just looking for a different way to get involved with the Wrangler NFR on a nightly basis, longtime PRCA steer wrestler and tie-down roper K.C. Jones has got a free product for you. RodeoGuess.com has a nightly contest in which entrants predict the times/scores for all 105 NFR contestants/teams. Entrants earn points based on the accuracy of each pick.

If you don’t have time to go through every NFR contestant, the game offers a quick-pick option. If you choose, you can then manually adjust times/scores for whichever contestants you wish.

“We’ve been doing Pro Fantasy Rodeo for 16 years,” Jones said of another contest he runs. “But this contest, RodeoGuess, really works well here at the NFR. It’s the same 15 contestants in each event, each night. It gets you tied to the game. Not only can you play at the NFR, you can play from anywhere in the world. You don’t even have go to the app store.”

All these options are further steps in making the Wrangler NFR a more interactive event for its fans, which is the goal every year.

“For us, it just creates another arm of sports betting fans,” Growney said, echoing Stevens’ sentiment. “For a hundred bucks, you could have 10 cards to win $5,000. There’s more interest in it when you have a ticket in your hands.”