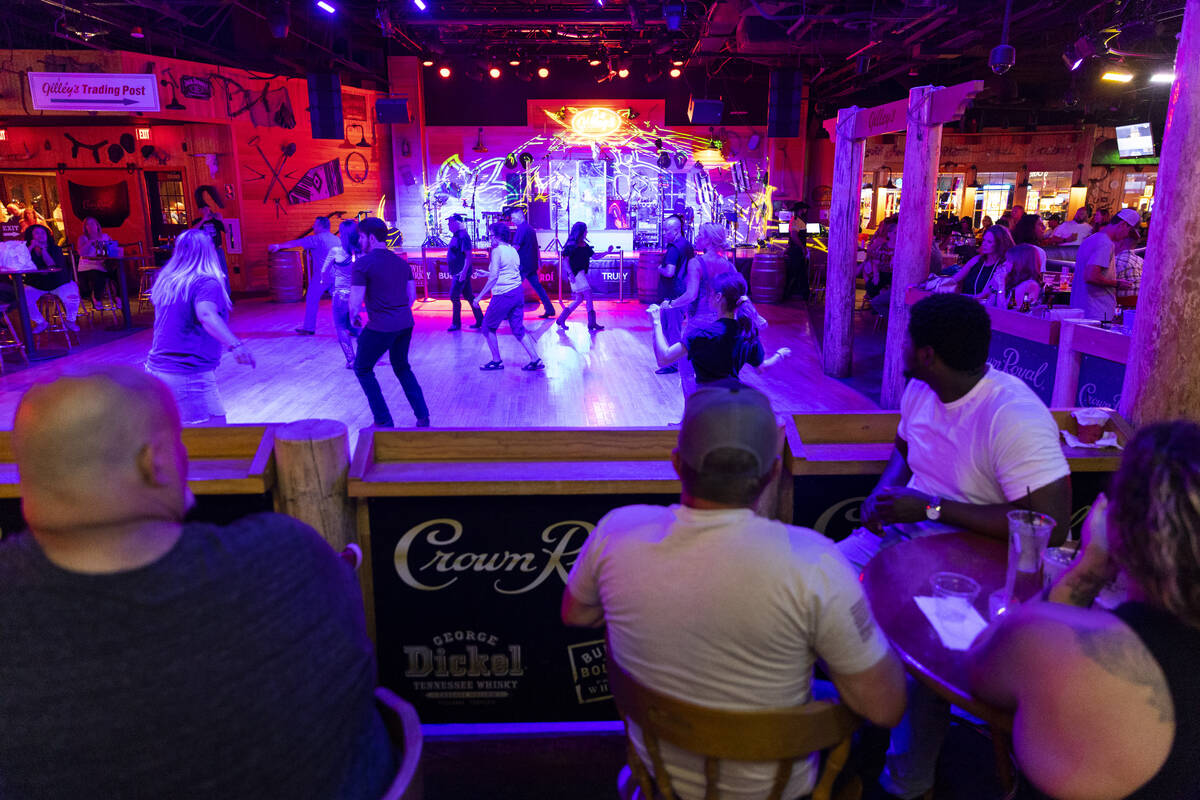 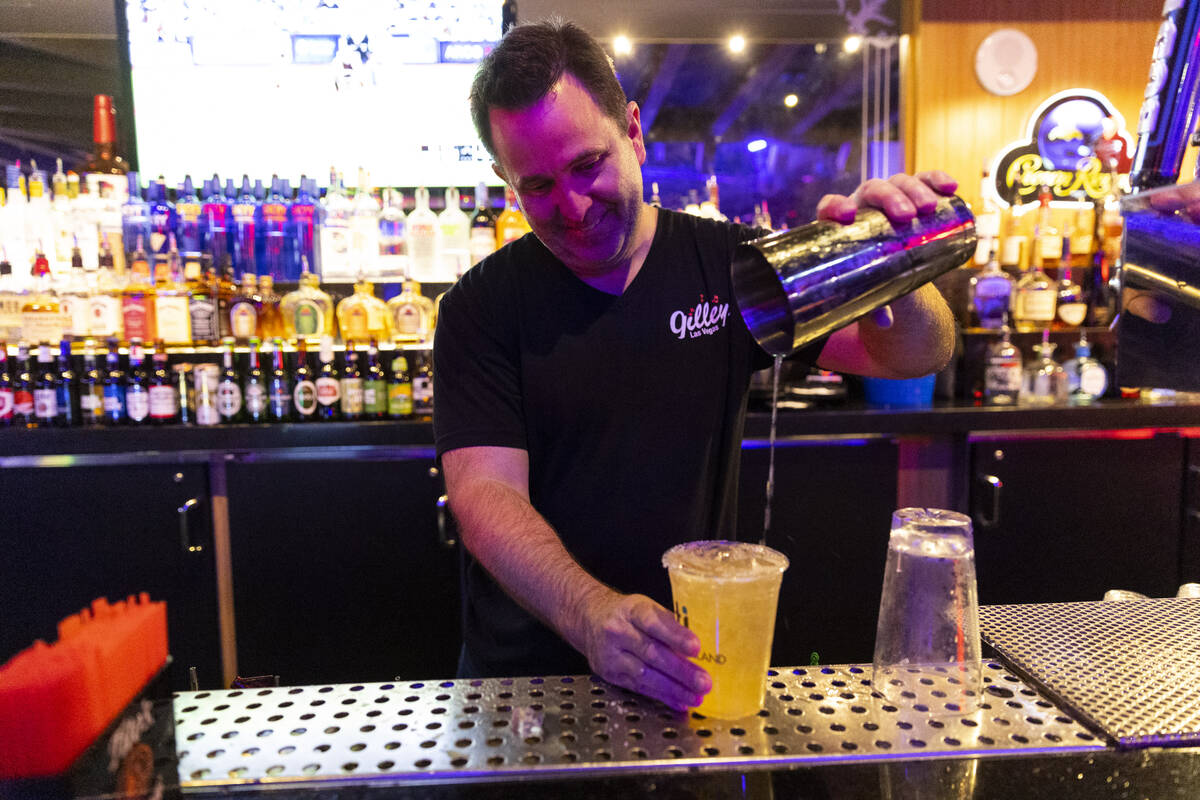 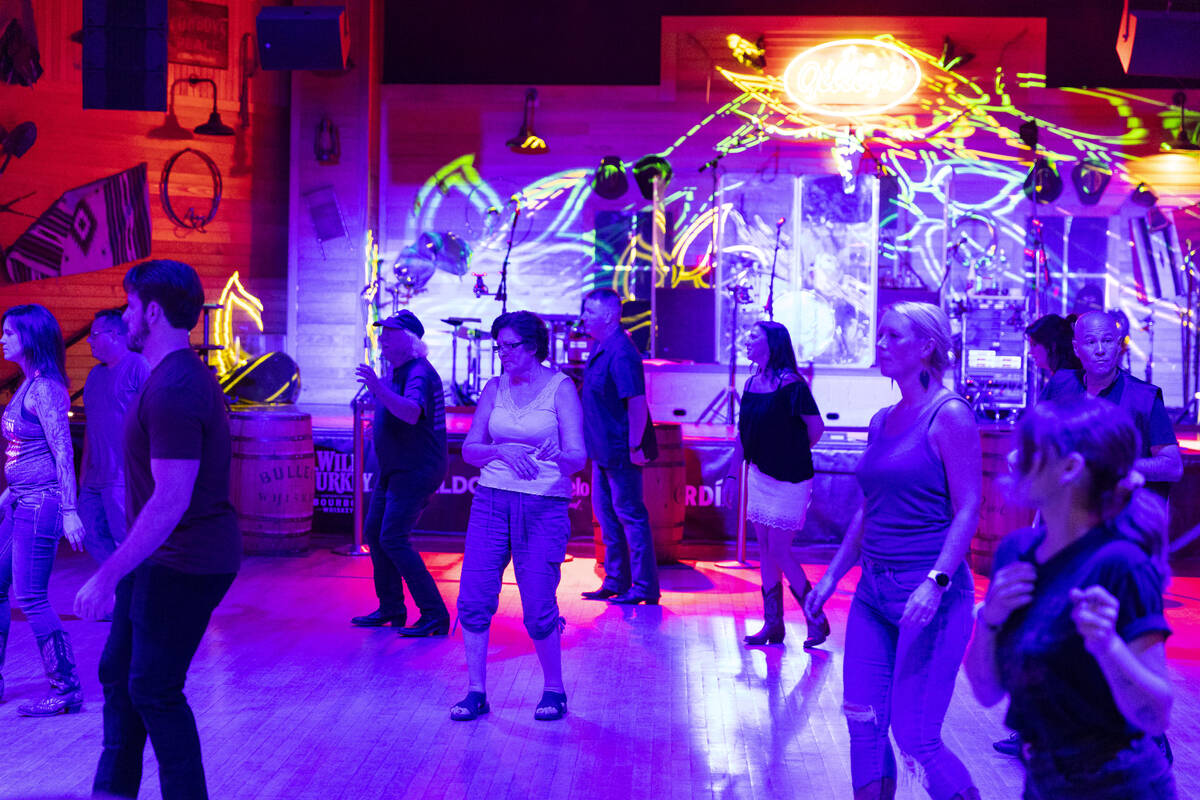 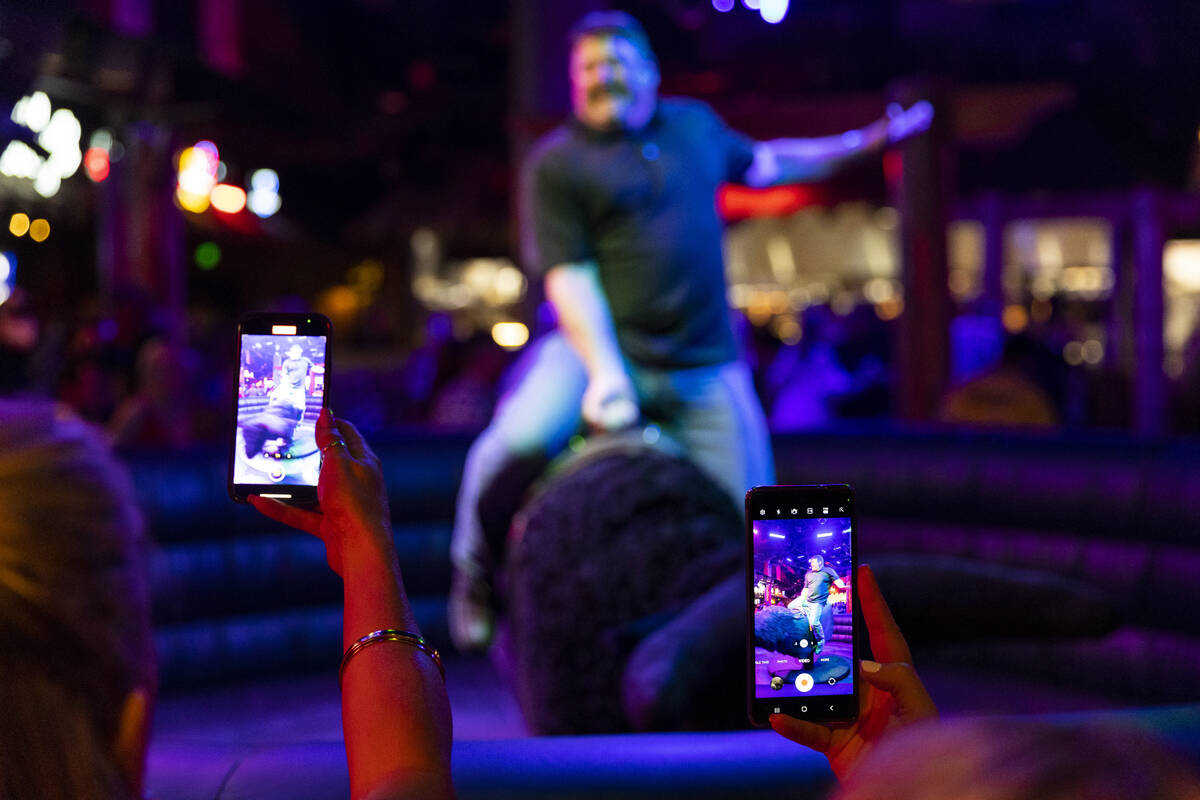 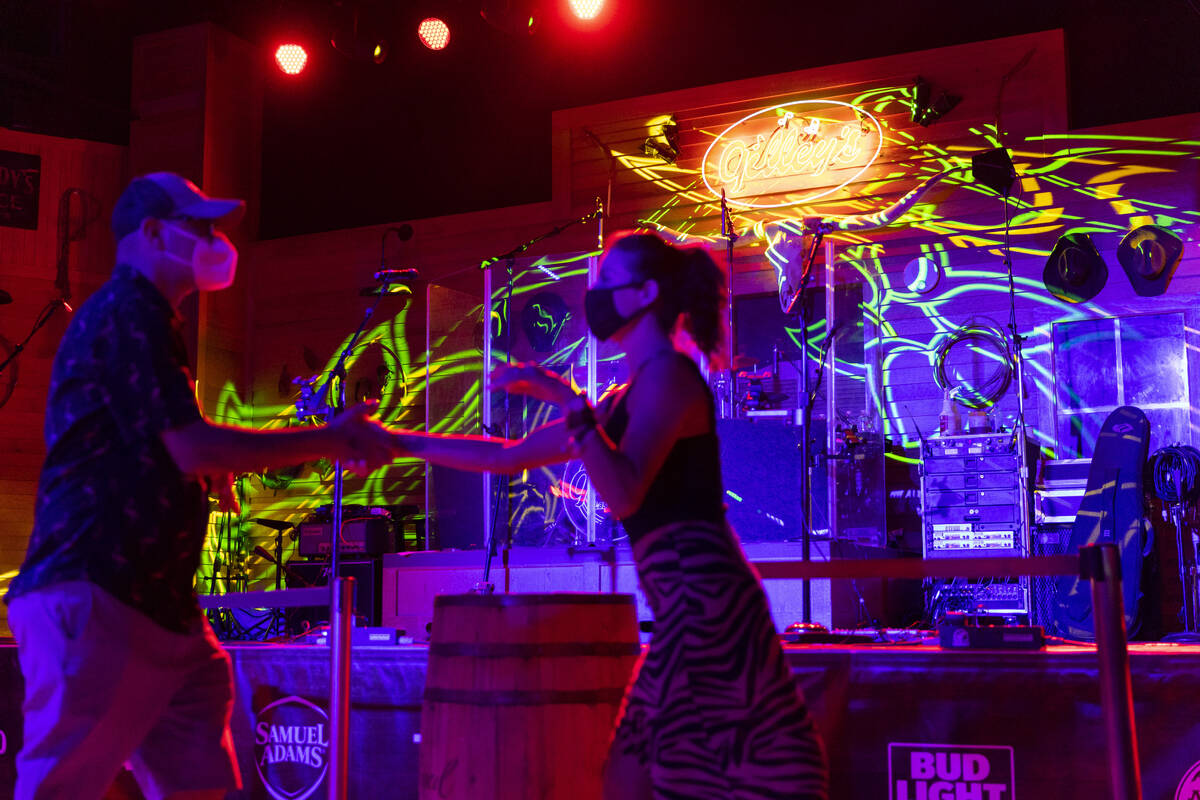 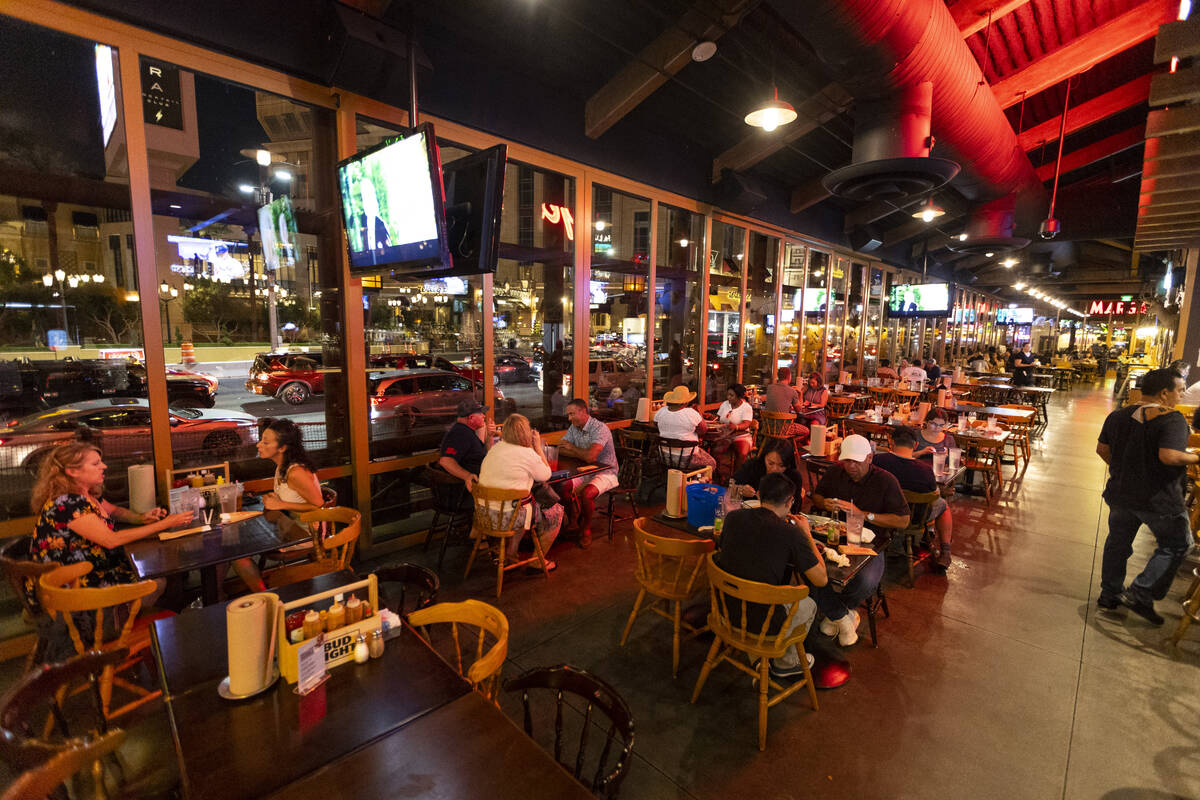 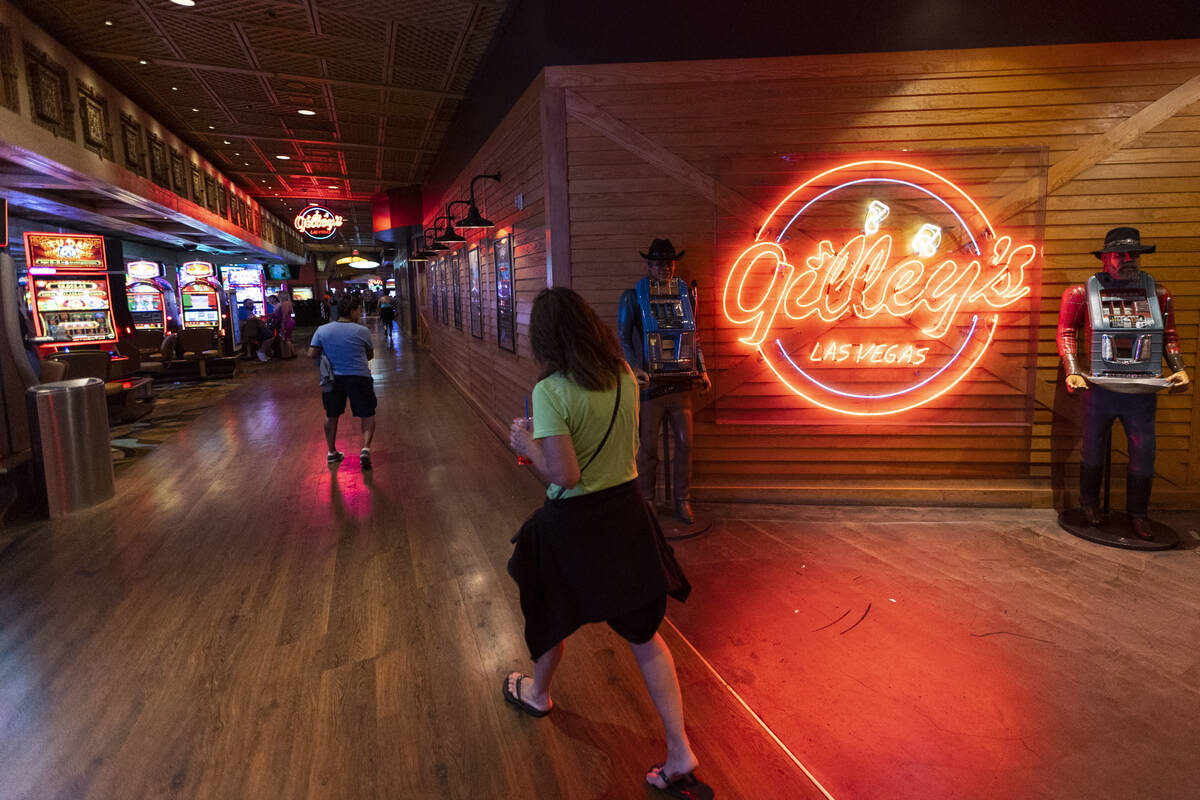 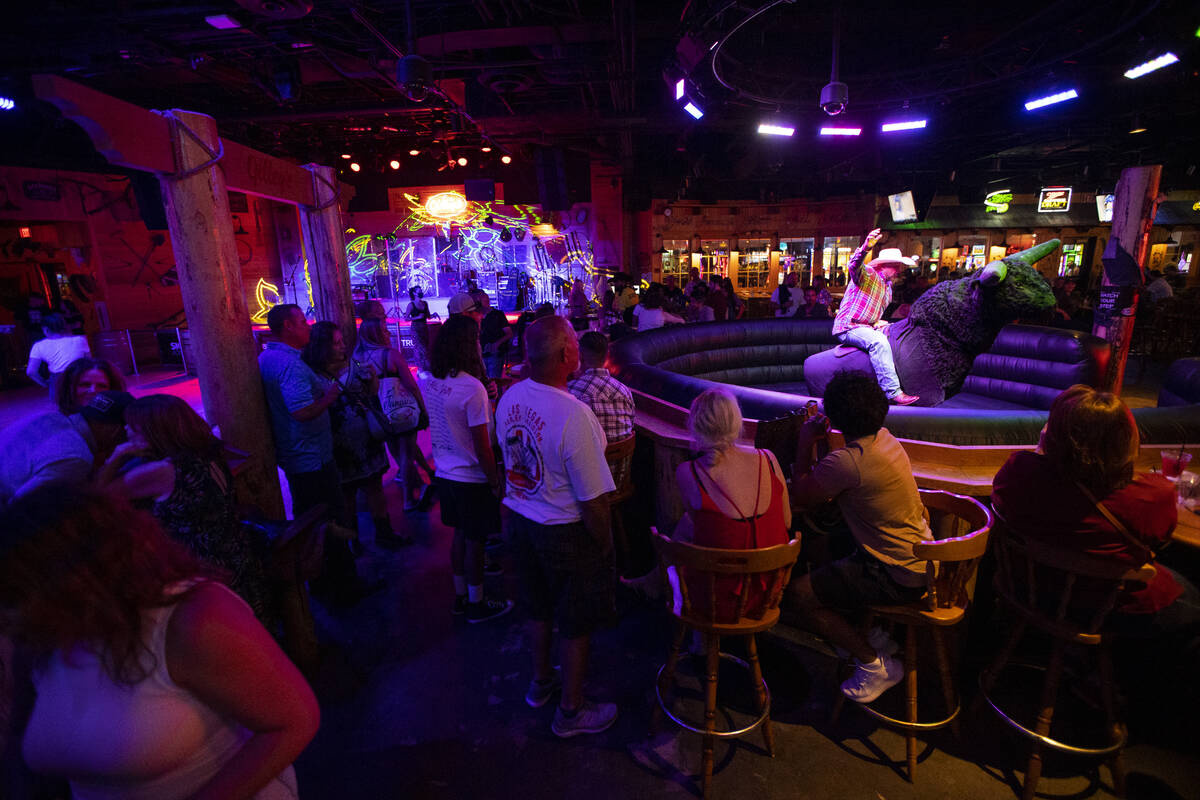 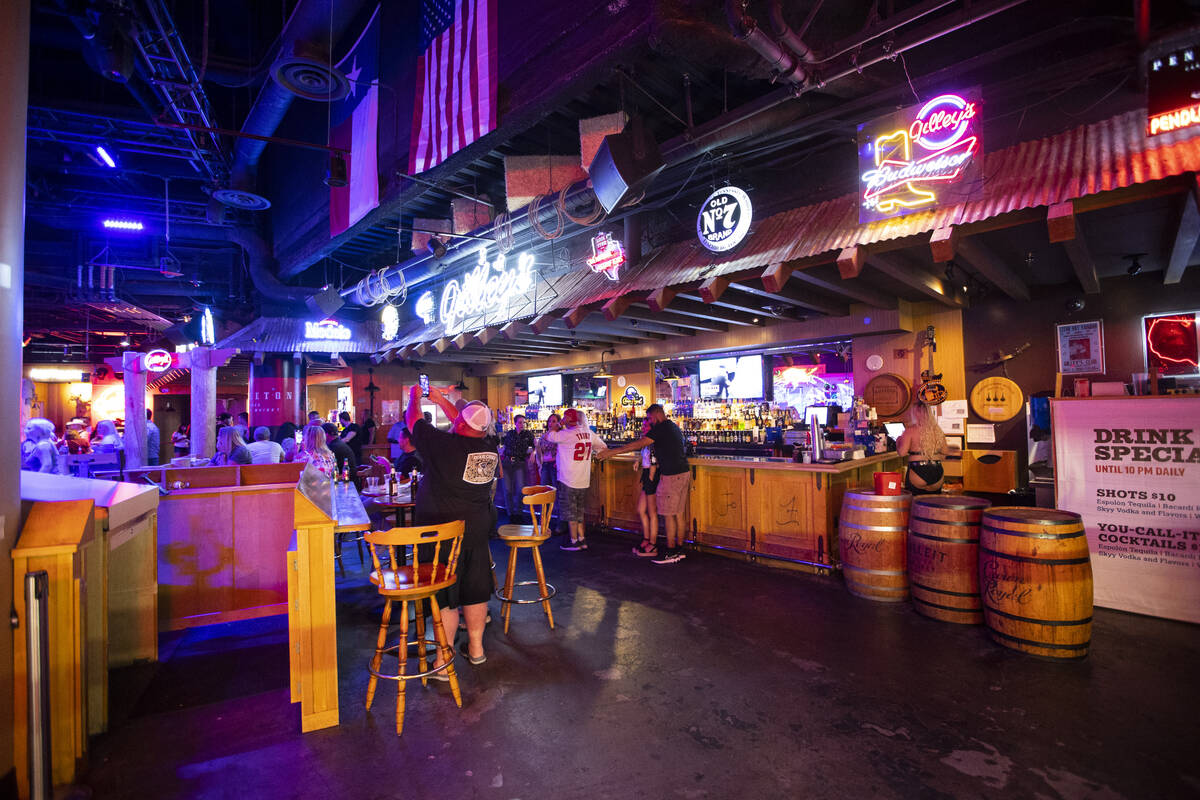 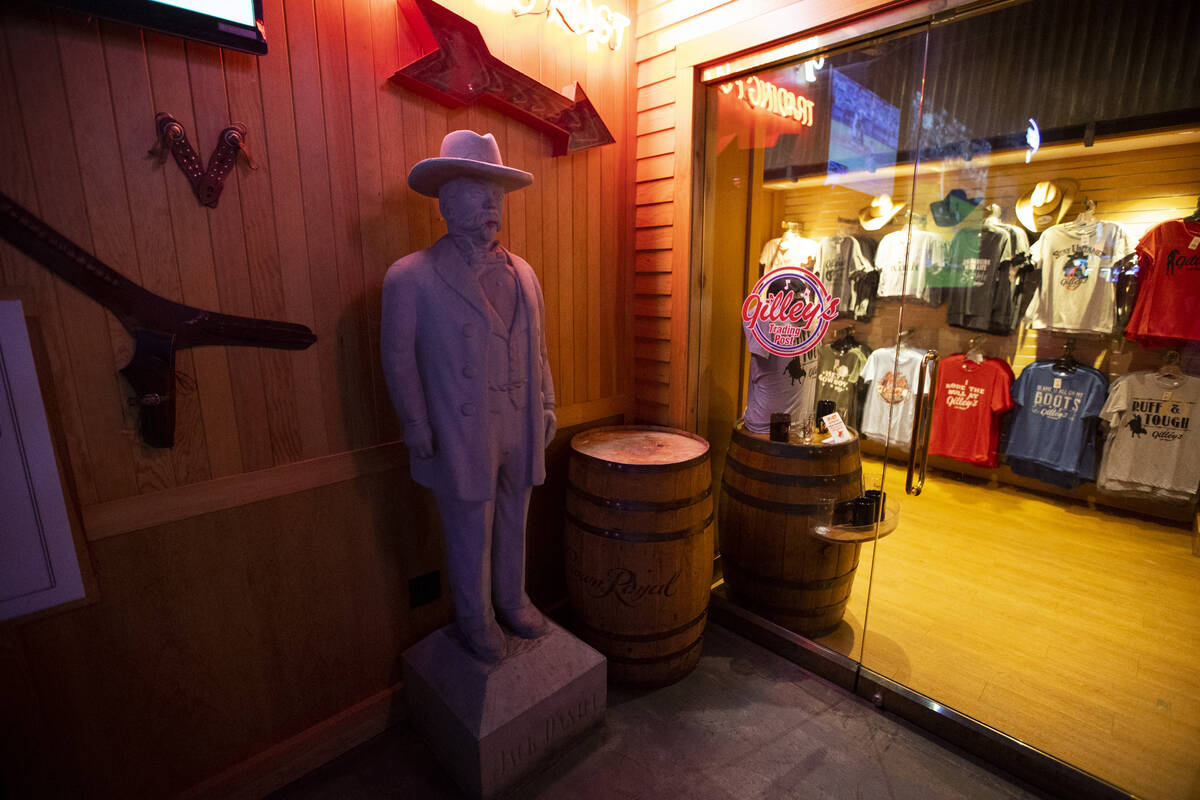 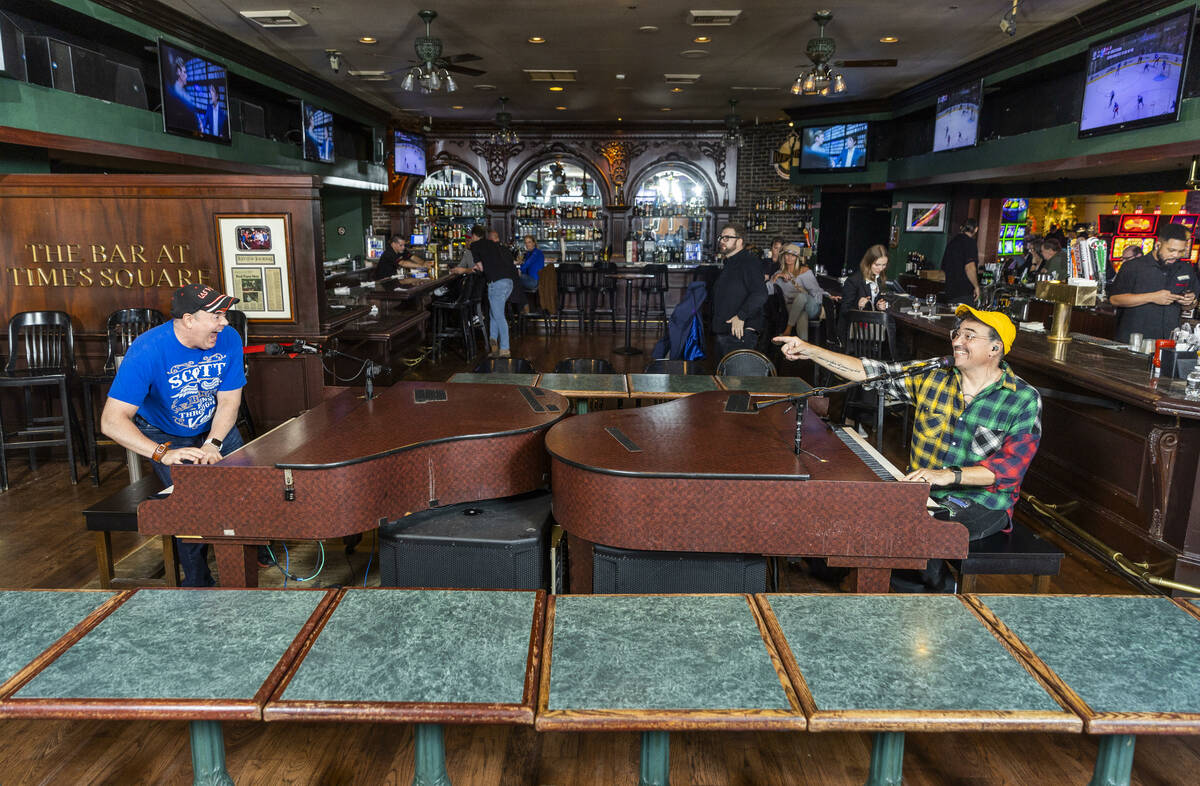 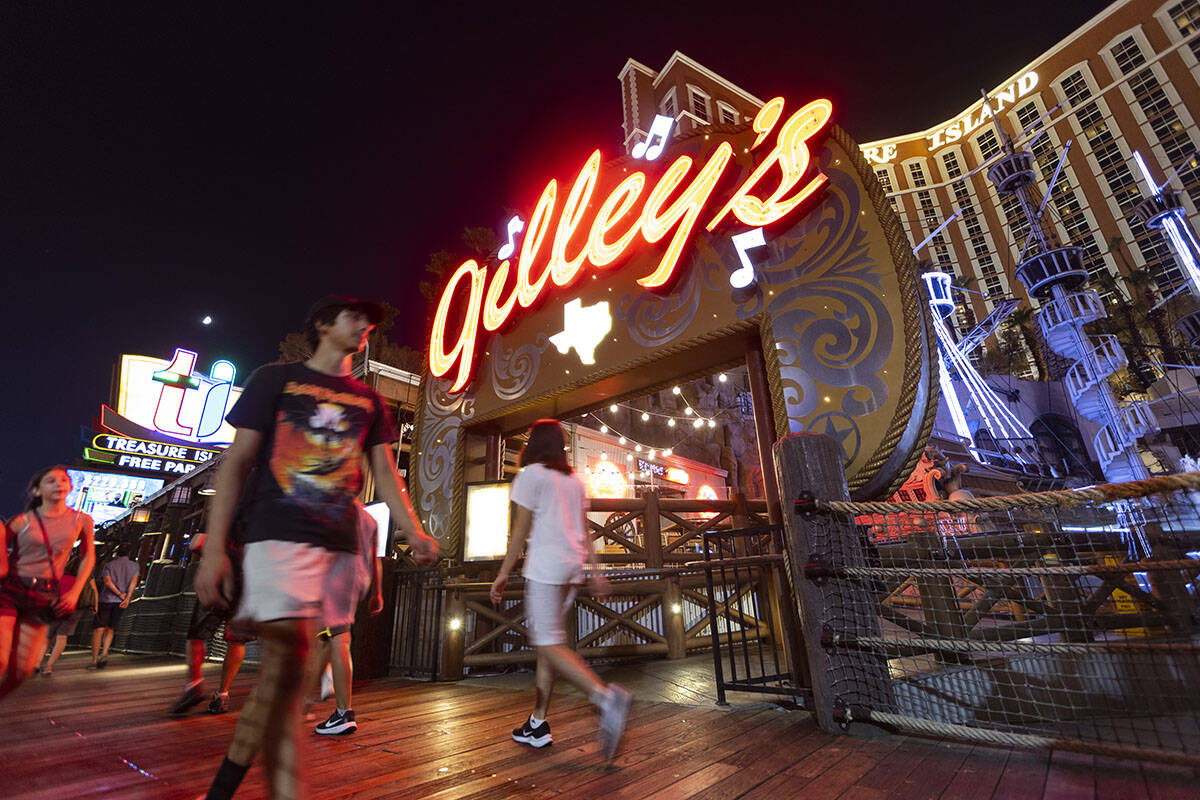 Gilley’s Saloon at Treasure Island is a popular party spot each night after the NFR competition concludes. (Erik Verduzco)

Each night during the Wrangler National Finals Rodeo, competition at the Thomas & Mack Center ends around 8 p.m. And the folks at Gilley’s can pretty much set their watches by what happens next.

“Suddenly, there’s a wave of people coming from the arena,” said Paul Reams, who oversees Gilley’s as Treasure Island’s executive director of entertainment operations. “They know where their favorite local honky-tonk is. Gilley’s becomes the after-party club.”

In fact, NFR patrons have a couple of notable hangouts that offer the true cowboy/cowgirl vibe: Gilley’s, inside the TI, and Stoney’s Rockin’ Country, at Town Square on Las Vegas Boulevard South. If you’re looking for that legit honky-tonk vibe — and want to soak it in until the wee hours — those are your spots, people.

“The vibe is high-energy, without a doubt,” Reams said. “We have a viewing party, so you can watch the NFR live, and that leads into the [late] evening. It’s entertainment-packed until 3 a.m. The bands we have fit the cowboy lifestyle, kind of on the Texas side of music.”

Smart move, considering the NFR is flooded with contestants and fans from the Lone Star State. And the food has a Texas flair, as well. TI executive chef Craig Taylor handles that component, and honestly, there’s not much change necessary. Gilley’s year-round menu is rodeo-ready; about the only difference is more drink specials, particularly anything with whiskey in it.

“The menu is straightforward Texas barbecue, and we keep it that way. We’re so busy during the NFR that it would be crazy to change the menu,” Taylor said. “We set up the whole saloon with tables everywhere, very accessible, so people can watch the NFR and eat dinner. Then we convert to a honky-tonk later at night.”

The venue transitions from all ages for the viewing party to 21 and up for the late-night festivities, including a live concert each night. And of course, throughout the entire night, countless patrons try their hand on the mechanical bull.

“It is iconic,” Reams said. “The place really does have that urban cowboy feel, honky-tonkish. It’s just short of sawdust and peanuts on the floor. And we’d probably have that if the fire department would allow us.”

Down the road at Stoney’s, marketing director Jeff “Toad” Higginbotham said he certainly sees the boon from a rodeo crowd looking for something different, away from the glitz of the Strip and Fremont Street.

“If you go back 10 years or so, it was awesome. Then the casinos started offering all this stuff,” Higginbotham said, alluding to expanded viewing parties, concerts and such that led to a slowdown at Stoney’s. “But last year was one of the best years we ever had. The cowboys and cowgirls were tired of the casinos and wanted to go to a real honky-tonk, like in Texas or Oklahoma.”

Stoney’s is only open Thursday to Saturday each week, but that covers six nights of the 10-night NFR. Every night is busy, from 7 p.m. to 3 a.m., and the two Thursdays do huge business with the NFR crowd.

“Friday and Saturday night, we have a live concert,” Higginbotham said. “Thursday night is Ladies Night, which is a staple in this community. It’s something that just keeps doing better and better.”

Higginbotham noted that Farm Table Kitchen has a setup within Stoney’s, providing patrons with grab-and-go food such as pulled pork sandwiches, burgers and the popular Nashville Hot Chicken. Perhaps not surprisingly, Ranch Water Hard Seltzer is a favorite of the NFR crowd, too.

And grab-and-go jibes with the vibe, as Stoney’s patrons are primarily there to scoot their boots on the dance floor.

“It’s all dancing — more dancing than everything else,” Higginbotham said, adding that for those who need to learn or brush up on their line-dancing skills, there are lessons each night at 7:30 and 8:30. “It’s dancing first, live music second, and that’s why people come to Stoney’s.” ◆