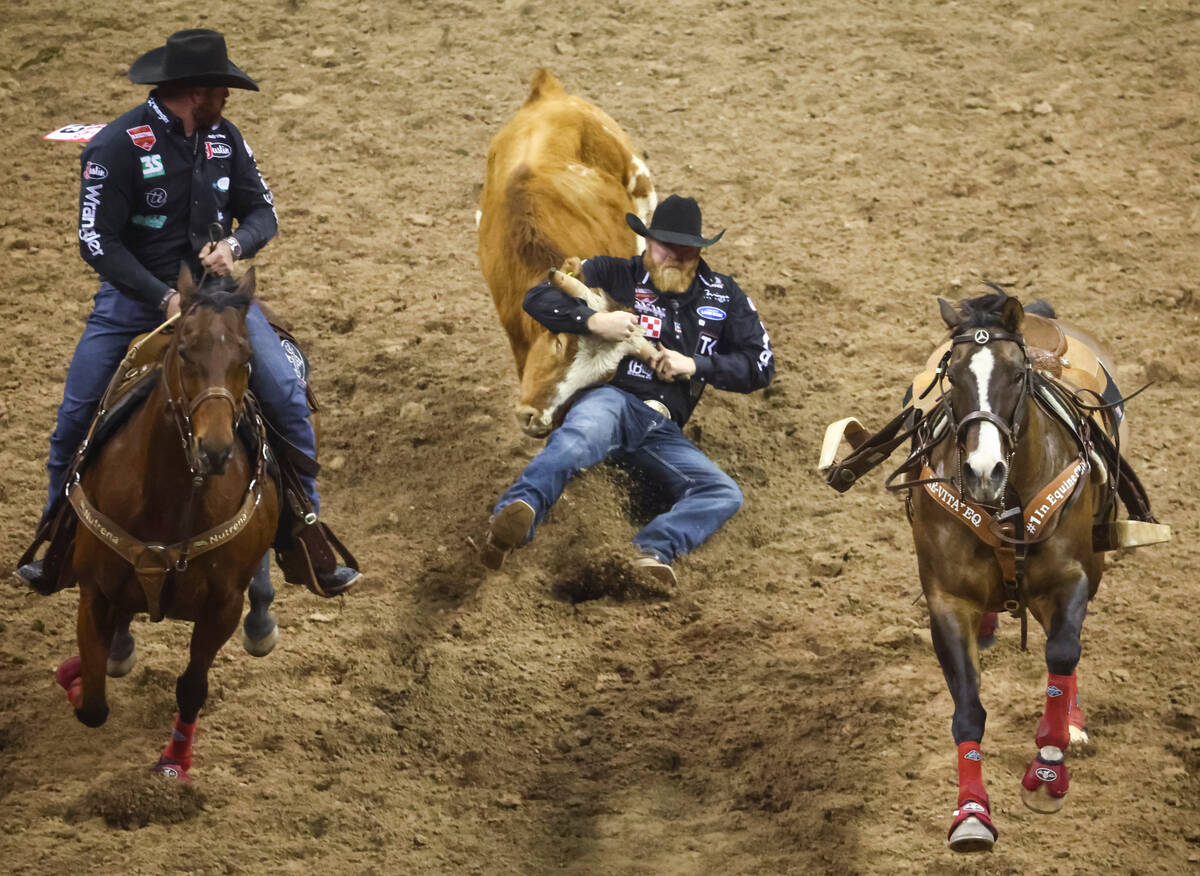 Will Lummus, of Byhalia, Miss., competes in steer wrestling during the first night of the National Finals Rodeo at the Thomas & Mack Center on Thursday, Dec. 1, 2022, in Las Vegas. (Chase Stevens/Las Vegas Review-Journal) @csstevensphoto 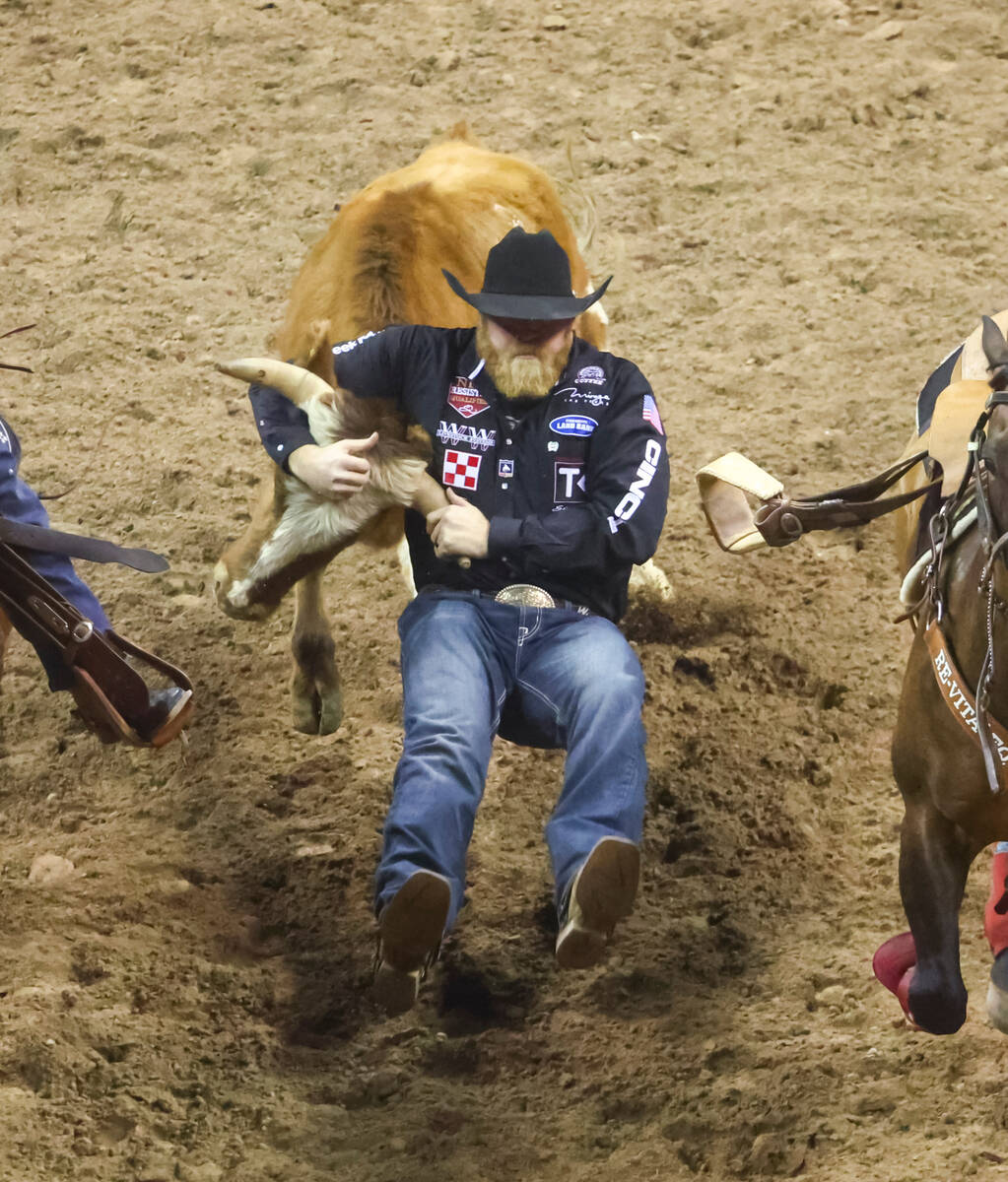 Will Lummus, of Byhalia, Miss., competes in steer wrestling during the first night of the National Finals Rodeo at the Thomas & Mack Center on Thursday, Dec. 1, 2022, in Las Vegas. (Chase Stevens/Las Vegas Review-Journal) @csstevensphoto

In rodeo, days off are not an option, especially if an athlete wants to compete at the highest level.

Missing a run during the regular season means a missed opportunity to collect a check, which can mean coming up short of qualifying for the Wrangler National Finals Rodeo each December.

Steer wrestler Will Lummus knew this years ago. That’s why, when he enrolled at the University of Tennessee-Martin, Lummus decided to earn his bachelor’s in health and human performance.

“The body has taken care of itself for centuries, and I think a lot of people have lost sight of that,” Lummus said ahead of competing at this year’s Wrangler NFR. “I just think it’s amazing that our body can fix itself, if used correctly, and we know how to fix it. It just always fascinated me.”

His passion for health did not stop once he graduated college.

Every two years, Lummus renews his license to be a physical therapist and routinely takes part in continuing education to keep up on the latest techniques used in the field. He’s certified to do myofascial release to address pain and has taken courses in cupping and rock taping.

His travel bag always has a softball and a stretchable band product known as VooDoo Floss. The softball is something he often rolls around on to work out knots and sore muscles, while the floss bands are used to help reduce swelling and stiffness by flushing out toxins in the bloodstream around joints.

“We sit in a dadgum pickup truck for hours on end, and you can’t help but just be knotted up and tight once you get out of the truck,” Lummus said. “The main goal is to just fix it to where we can be competitive.”

Lummus’ self-care is a big reason he’s back at the Wrangler NFR for a fifth straight year. Last December, he finished second in the world standings while winning the NFR average, with more than $169,000 earned over 10 days of competition.

This year, the Byhalia, Mississippi, cowboy capped the regular season with almost $120,000 in earnings, good enough for fourth in the world standings entering the NFR.

While the ability to do personal therapy is a big reason for his success, Lummus doesn’t limit his skills to himself. He’s regularly asked by other competitors to help address an aching muscle or sore spot to help them get back on the horse.

“It’s kind of cool when you rodeo with a group of bulldoggers — whatever is ailing them, you can kind of figure out what’s going on,” Lummus said. “I try not to overstep my bounds with Justin Sports Medicine because that’s what they’re there for, but sometimes they’re not at every rodeo, and sometimes we need to hook some guys up.”

In 2019, Lummus offered his traveling partner and friend Jacob Talley a big assist. Talley tore his pectoral muscle at the Red Bluff, California, rodeo in April and was told his recovery would take six to eight months. Talley had qualified to compete at the Calgary Stampede over the summer, an opportunity he wasn’t about to miss out on.

Exactly 11 weeks from the date of his surgery, Talley was back in the arena bulldogging in Canada.

“We spent time working on it every day for the rest of the year. He kept stretching on it, digging on it to break down scar tissue, anything he could do to help keep it from tearing again, he dang sure did it,” Talley said. “I don’t know if that was the smartest thing to do and don’t know if I’d advise it, but having him in there helped make sure it didn’t tear again. It would have been almost impossible not to, without him working on it every day.”

To be fair, Lummus notes his work on Talley wasn’t entirely altruistic.

“He’s one of the toughest guys going down the road, but I could make him sweat digging off in that pec. That was exciting to me because I actually got to inflict a little pain on him, as tough as he is,” Lummus joked. “It was pretty impressive what he did, and that’s one guy I do feel like I made a difference in helping him kind of make it through the rest of that year.”

That insight on staying healthy is a piece of what Lummus brings to Northwest Mississippi Community College. In August, he was announced as head coach for the Rangers’ rodeo program.

His goal is to provide the next generation of cowboys and cowgirls with insights that helped him reach the pinnacle of the sport, with some tips that might keep them healthier down the road.

With overseeing a fencing company and being a licensed physical therapist, Lummus’ options outside of the arena are certainly plentiful. But for now, his focus is centered on the competition at the Thomas &Mack Center. Another buckle, this time hopefully for a world championship, is within reach.

And, thanks to some physical therapy, Lummus is in good shape for the competition.

“Everybody can say, ‘Well, my goal is to win the world.’ But to win the world, you’ve got to make the Finals. Just being able to compete in that building is a feat in itself. It’s truly just a blessing. You rodeo all year long against however many hundreds of guys, and they only take 15 — it’s pretty incredible,” Lummus said. “It still gives me chill bumps to think about it. To do it five years now consecutively, it means a lot. Every year is just as special as the last one.”