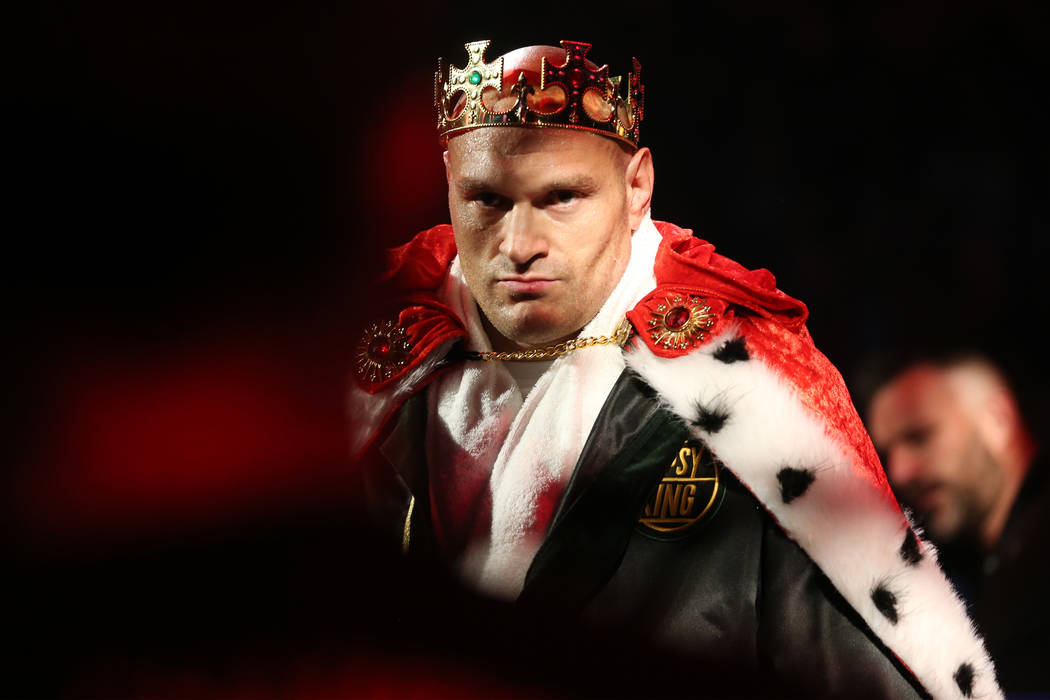 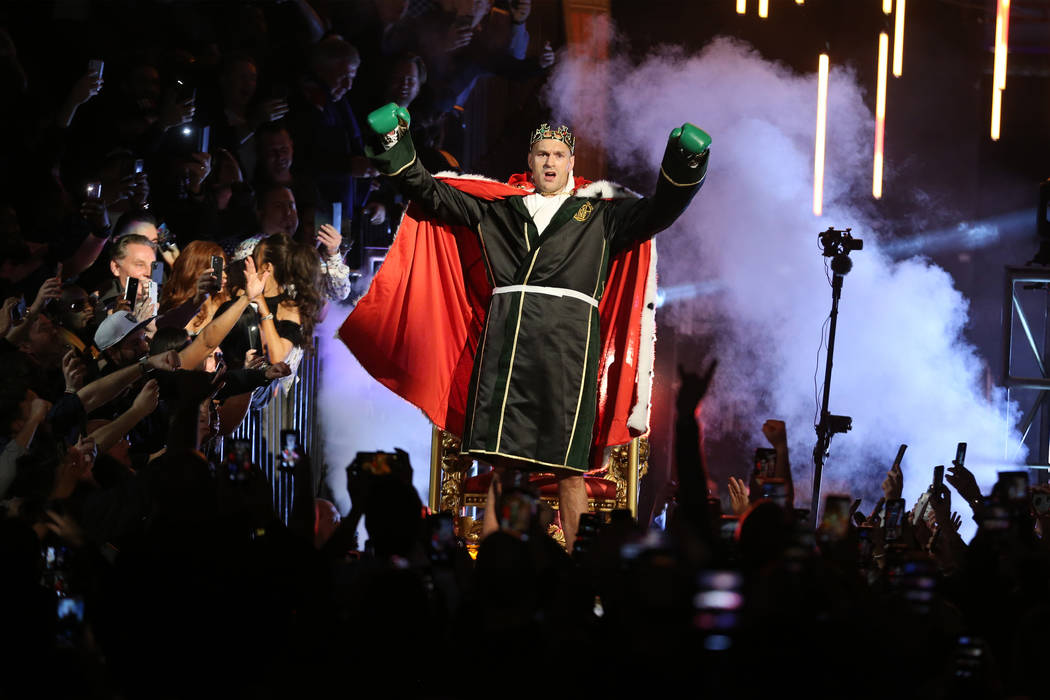 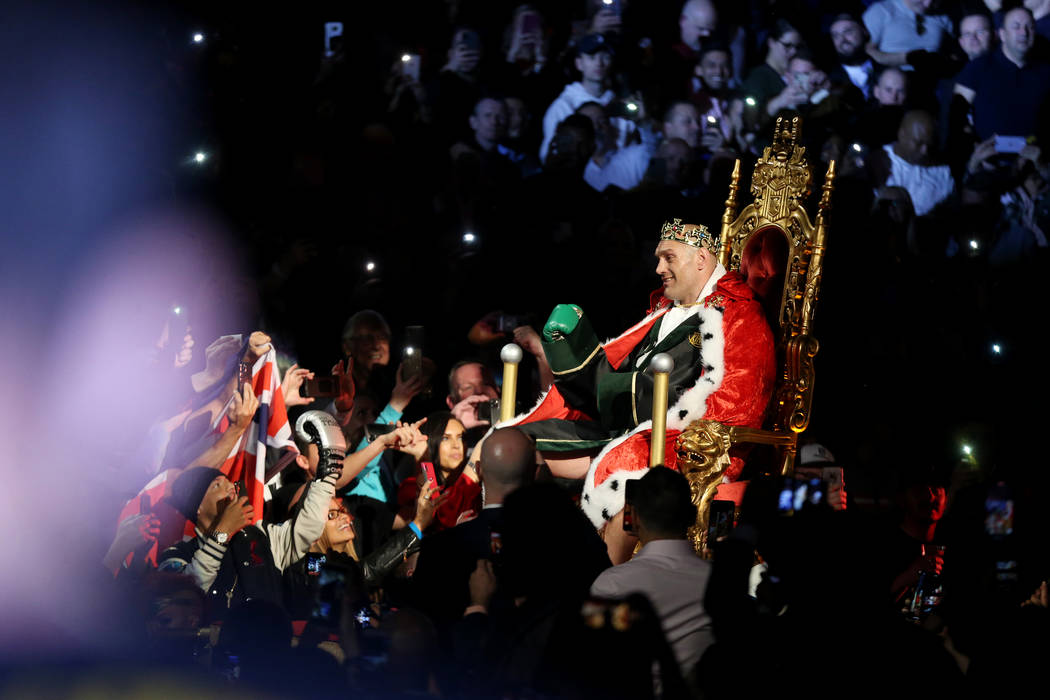 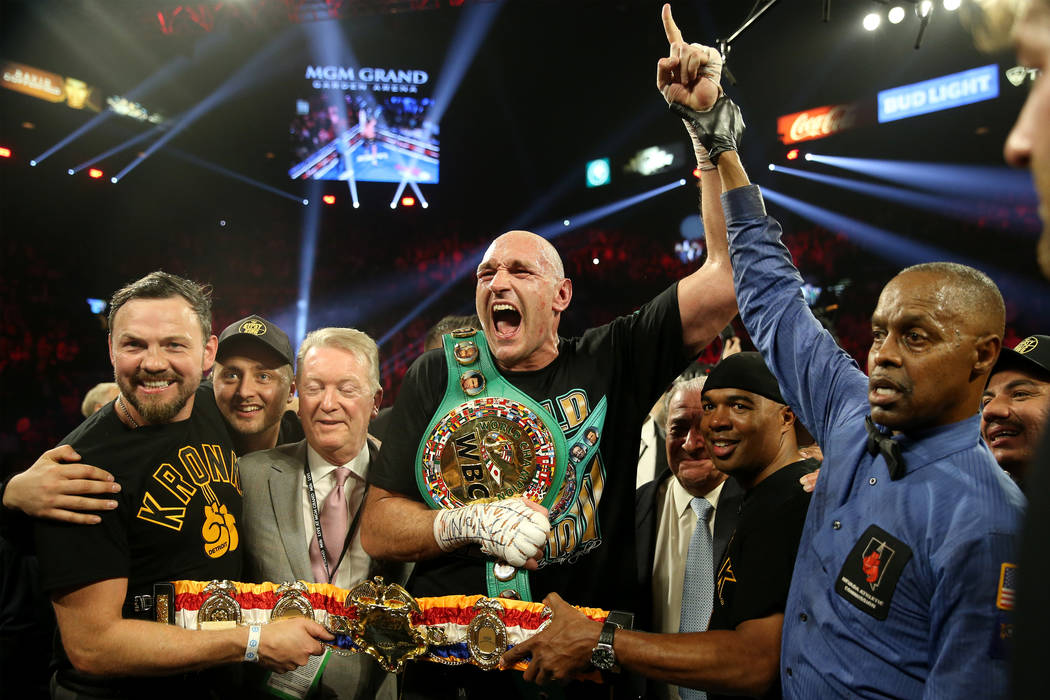 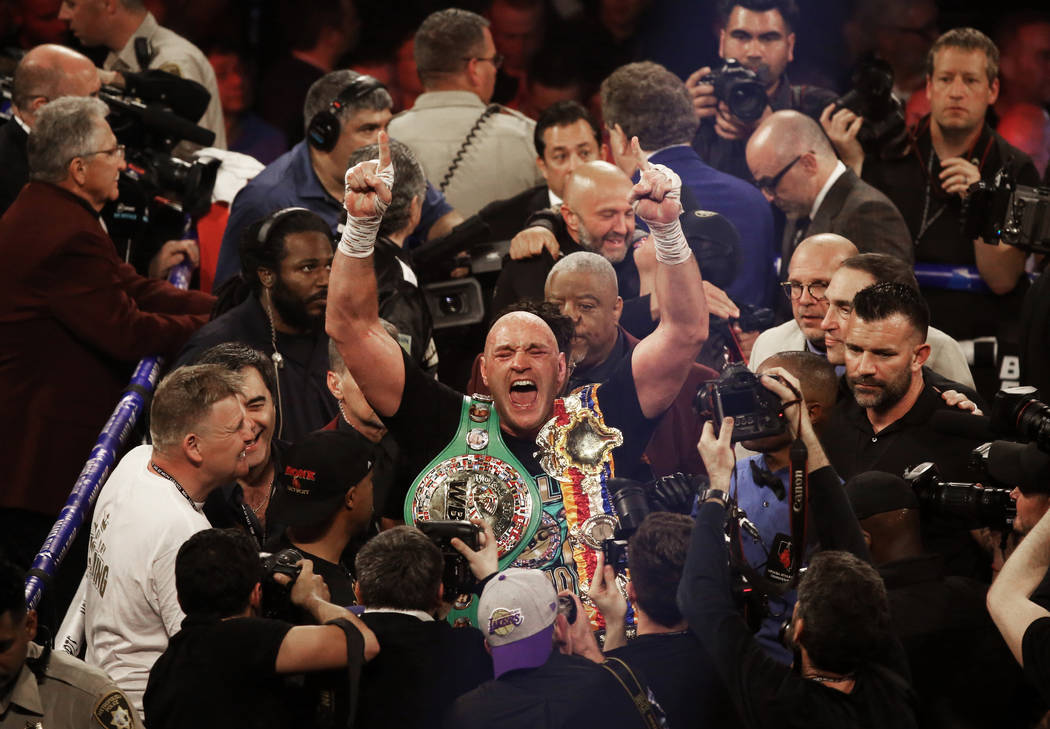 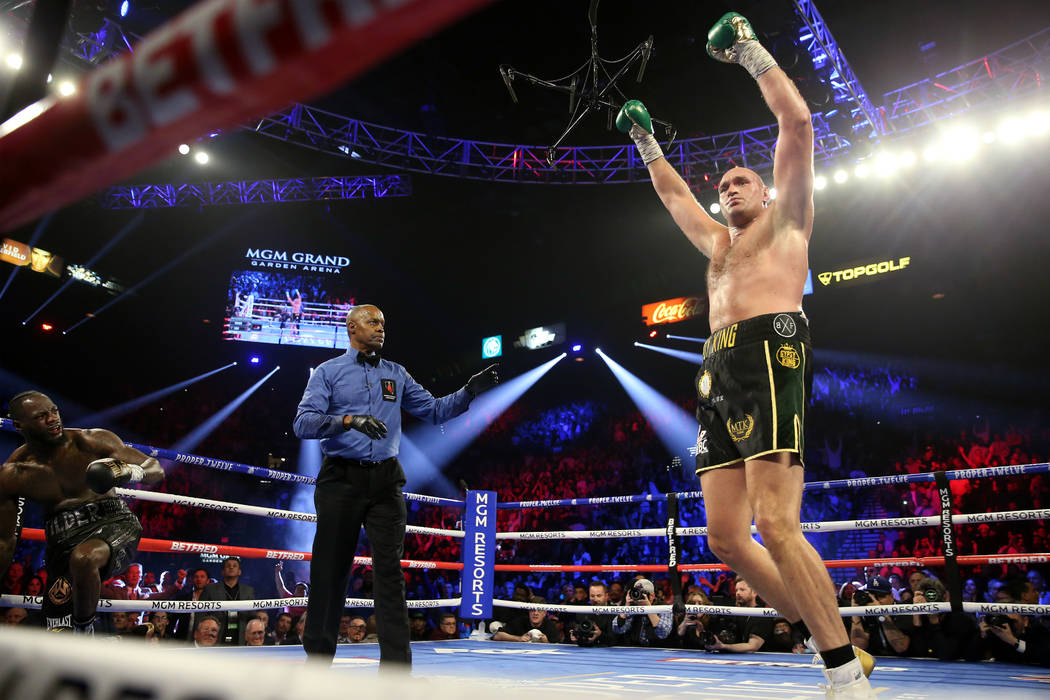 Tyson Fury, right, raises his hands after knocking down Deontay Wilder in round 3 of the WBC world heavyweight championship bout at the MGM Grand Garden Arena in Las Vegas, Saturday, Feb. 22, 2020. Fury won by way of knockout in the sixth round. (Erik Verduzco / Las Vegas Review-Journal) @Erik_Verduzco 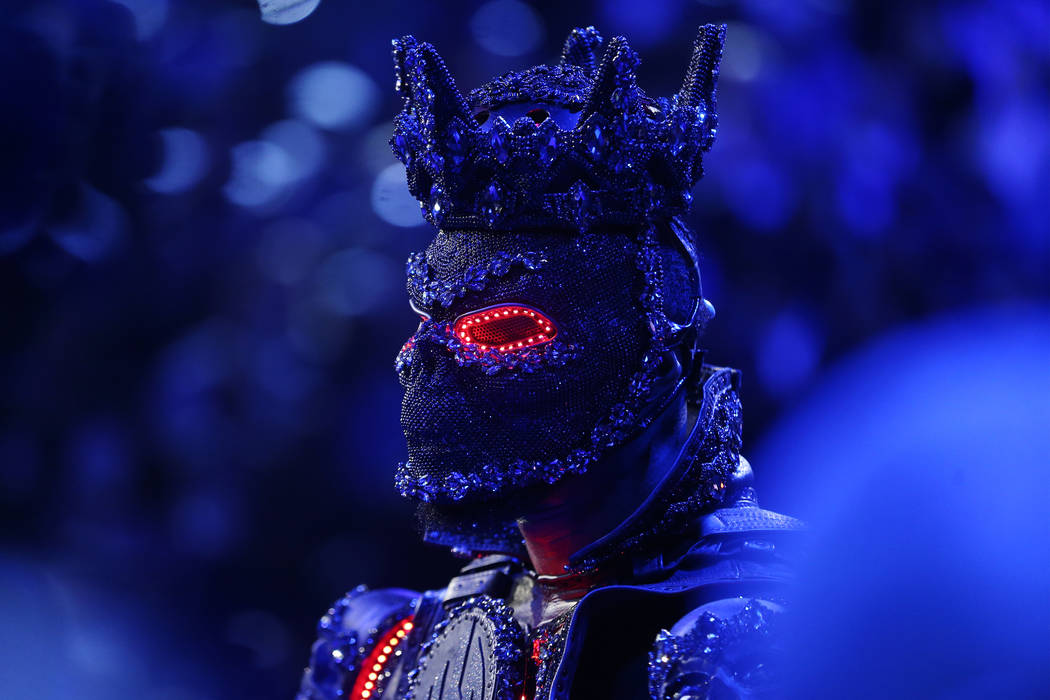 Kings, they say, fight for empires.

Tyson Fury rules his today in the most dominating of fashions.

Crown and cape and Patsy Cline to boot.

The sequel was more interesting for its pre-fight dramatics, because Fury on Saturday night made what occurred in the ring a personal statement heard ’round the globe.

Without question, the world’s heavyweight champion is the Gypsy King, who pummeled Deontay Wilder until the American’s corner threw in the towel at 1:29 of the seventh round before a sellout gathering of 15,816 at the MGM Grand Garden.

It’s funny how slow such an ordinary white object can appear in flight, suspended in a dark cloud of failure, an excruciating symbol of quitting.

In his case, however, it was a just action to save Wilder from further pain and punishment.

He was outclassed, from walk-ins to the final barrage of punches.

“I have said that those who stand in the dark never come out to the light,” Fury said. “But (Wilder) came here and he manned up and showed the heart of a champion. He’s a warrior and will be back. He will be champion again.

“But I will say the King has returned to the top of the throne.”

Fury and Wilder had fought to a draw in December 2018. Fury was knocked down twice before the decision was announced.

But there would be no such ambiguity this time as to who deserved to have his arm raised, Fury being the one to knock down Wilder twice and being farther ahead on the cards when things ended than San Diego State basketball is now from an unbeaten season.

(How about that from UNLV, by the way!)

Wilder was never in this. Ever.

The guy (Fury) who weighed 273 pounds to 231 for his opponent Friday was by far the fresher fighter.

Wilder wasn’t at the post-fight press conference. He had a date at the hospital.

It was a brilliant performance from Fury, as his countrymen from Britain would say.

Kings also need to feel the crown isn’t too heavy, and I’m not sure Fury has ever felt any undo duress to stake his place among the sport’s greats. Be assured also that boxing needs him in the worst way, a behemoth of a man with the personality and charisma and skills to return his division to the sort of prominence it enjoyed in previous eras.

Wilder made an astute point this week that, for so long, the heavyweight class was dominated by a champion no one outside his native land knew or really cared about.

Wladimir Klitschko of Ukraine was good enough to own the title for 12 years, but in that time what was once the sport’s most popular and charming weight class more or less existed in its own purgatory.

He translates across all cultures. America doesn’t need one of its own to be heavyweight champion in order to create great interest across the States.

Not with this guy on top.

He might have set an all-time record for walk-in theater, though Fury was actually carried in. He wore a crown and cape and sat upon his throne, the somewhat interesting but still sweet melody of Patsy Cline’s “Crazy” playing as he was delivered to the ring.

Then, shortly after, Wilder was the one feeling blue.

His fans certainly don’t feel crazy for loving him. The weigh-in on Friday and Saturday’s main event were dominated by those on Fury’s side of the ledger.

It was what you might have expected, a who’s who of celebrities dotting ringside seats.

Raiders owner Mark Davis and head coach Jon Gruden were among those watching, and I wouldn’t be surprised (after seeing Chiefs quarterback Patrick Mahomes in attendance) if Gruden didn’t inquire afterward about Fury’s interest in playing middle linebacker.

Maybe. There would be lots of hurdles to scale for that one.

For now, all hail the King.

No legitimate kingdom can endure two of them.

Tyson Fury made sure of that.