Vegas Nation's Ed Graney breaks down the Las Vegas Raiders 2021 NFL Draft class and describes when their worth will be proven. (Cassie Soto/Las Vegas Review-Journal) 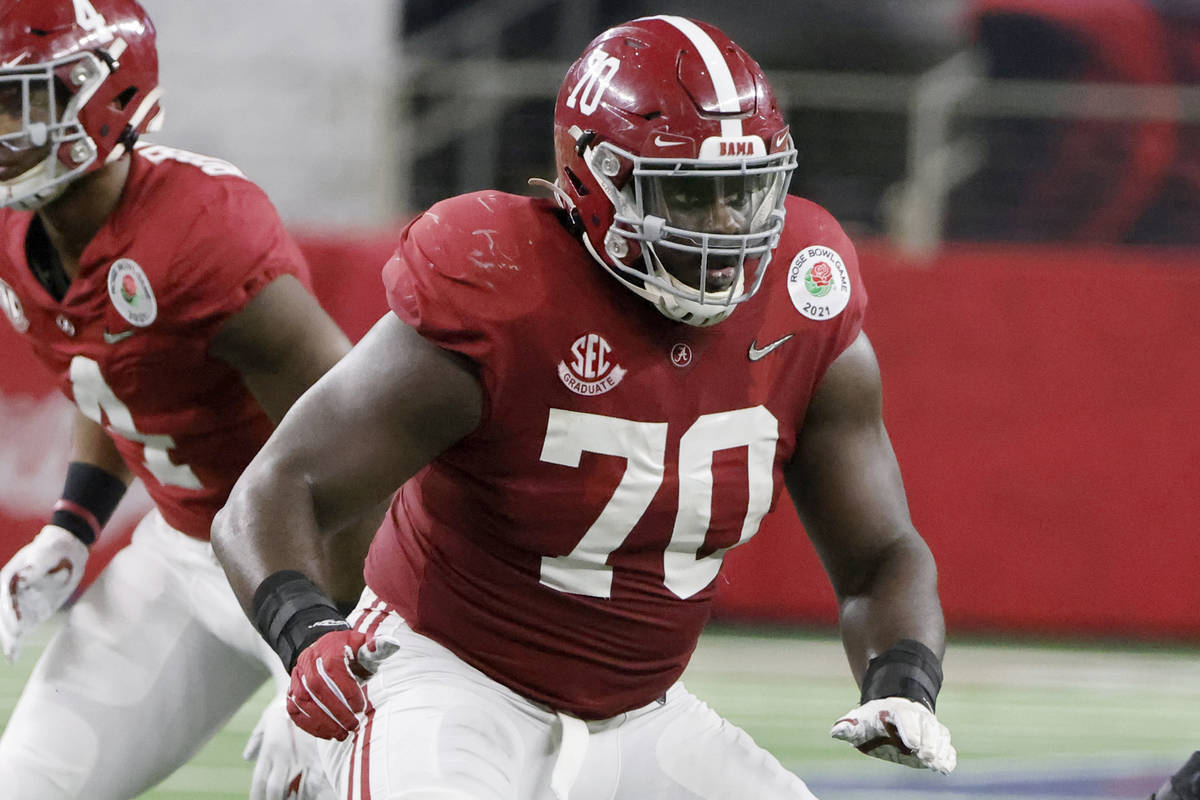 Let’s talk value when it comes to the NFL draft.

Work with me. Had the Raiders on Thursday used their first-round pick at No. 17 on Texas Christian safety Trevon Moehrig, coach Jon Gruden and general manager Mike Mayock would have been universally lauded.

The same positive reaction would have come Friday had the team selected offensive lineman Alex Leatherwood from Alabama in the second round at No. 43.

Within a span of 24 hours, Gruden and Mayock were ripped for again reaching from Summerlin to Henderson when it came to the first round and yet applauded for landing what most believe to be a huge steal in the second.

They were criticized for not trading back and taking Leatherwood at a later spot and praised for trading up to grab Moehrig, considered the draft’s best safety.

Most assigned the Raiders an F on Thursday and an A on Friday — also my respective high school grades in math and English.

“I ignore (outside opinions) 100 percent, except that it’s part of my job to understand league value,” Mayock said. “It might sound weird, but my background at NFL Network helps me with that. I can tell when a player is probably going to be a third- or fourth-round type of player. That’s what I did for 18 years. I studied all 32 teams.

“I have a good feel for what league value is versus what we consider to be Raiders value. Leatherwood had a big grade for us. I knew it was going to be controversial, but I really don’t care.”

The only important question: Can these two guys play?

Because no matter where those who aggregate dozens of draft boards each year believed Leatherwood and Moehrig should be selected, they can’t be misses.

Theirs are serious positions of need. Leatherwood will get the initial look at starting right tackle on a revamped line. Moehrig is thought the free safety desperately needed in new defensive coordinator Gus Bradley’s scheme.

One (Leatherwood) is the Outland Trophy winner for the nation’s best interior lineman. The other (Moehrig) is the Jim Thorpe Award winner as its top defensive back. They need to play like it. Right away.

If you want to suggest Gruden and Mayock draft as if they are the smartest duo going and think they know more than anyone across the league, I’ll buy it.

But while much goes into determining draft value — how teams assemble their board, what salary fits a certain position, confidence in evaluations by coaches and scouts — it still matters most how players ultimately perform.

Several of Gruden’s first-round selections since returning to the franchise in 2018 still must prove worthy of such placement. Some really have a long way to go. Most were selected far sooner than their allocated value by data analysts. Heck, cornerback Damon Arnette went 44 spots ahead of where most projected him. Much to prove there, for sure.

The Raiders on Friday also selected Buffalo defensive end Malcolm Koonce with the 79th pick and Virginia Tech defensive back Divine Deablo at 80. Somewhere out there in Analytics Land, folks are determining if such picks were of good value.

You know who doesn’t care about any of it? The guy who was supposed to be selected in the first round but wasn’t.

“I believed that it was going to happen then, but I didn’t let it affect me,” Moehrig said. “It’s a blessing just to be here, to get this opportunity and to play for the Raiders. So, slipping into the second is not a big deal. I’m excited and blessed.”

Can’t put a value on that attitude.