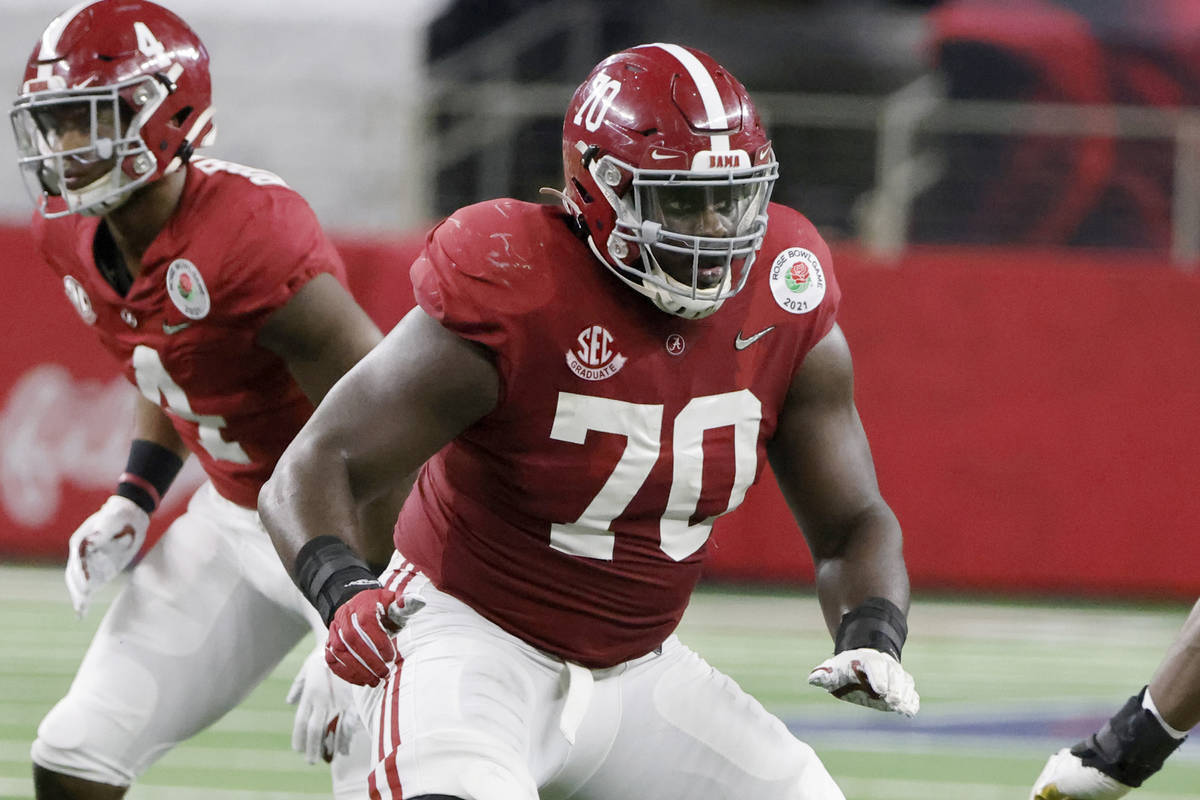 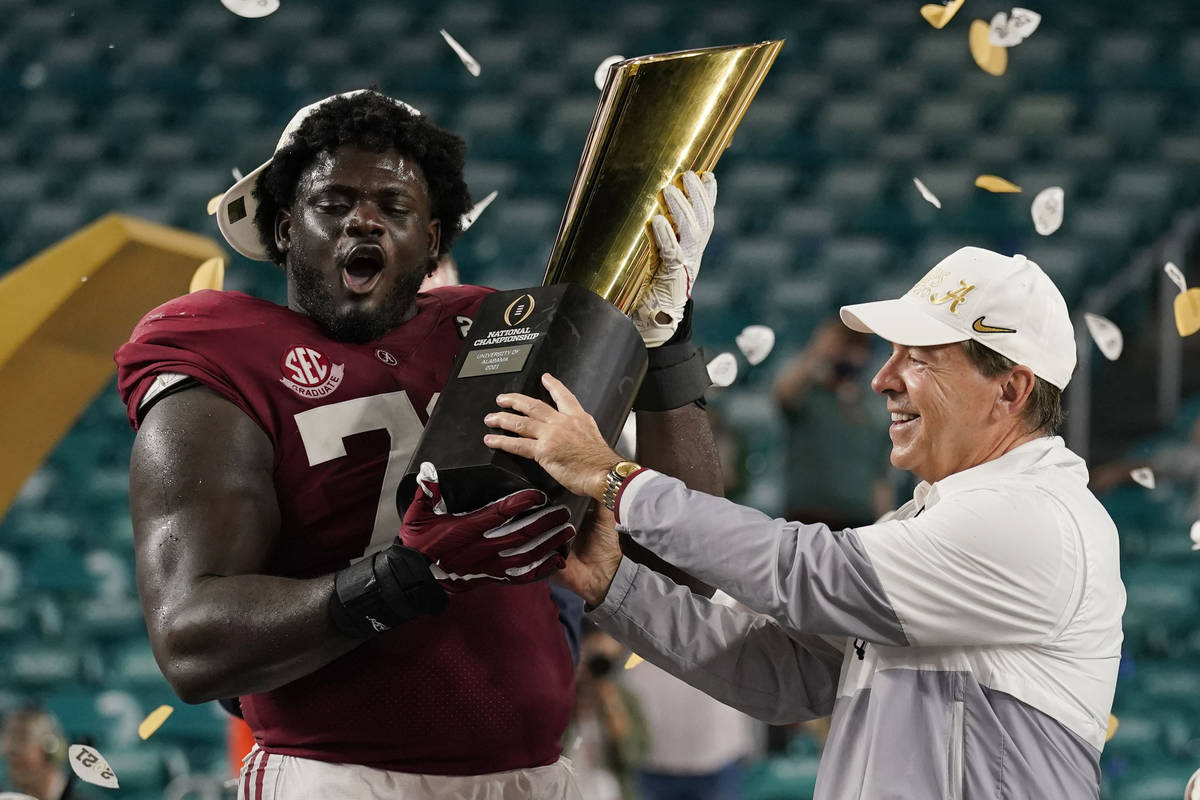 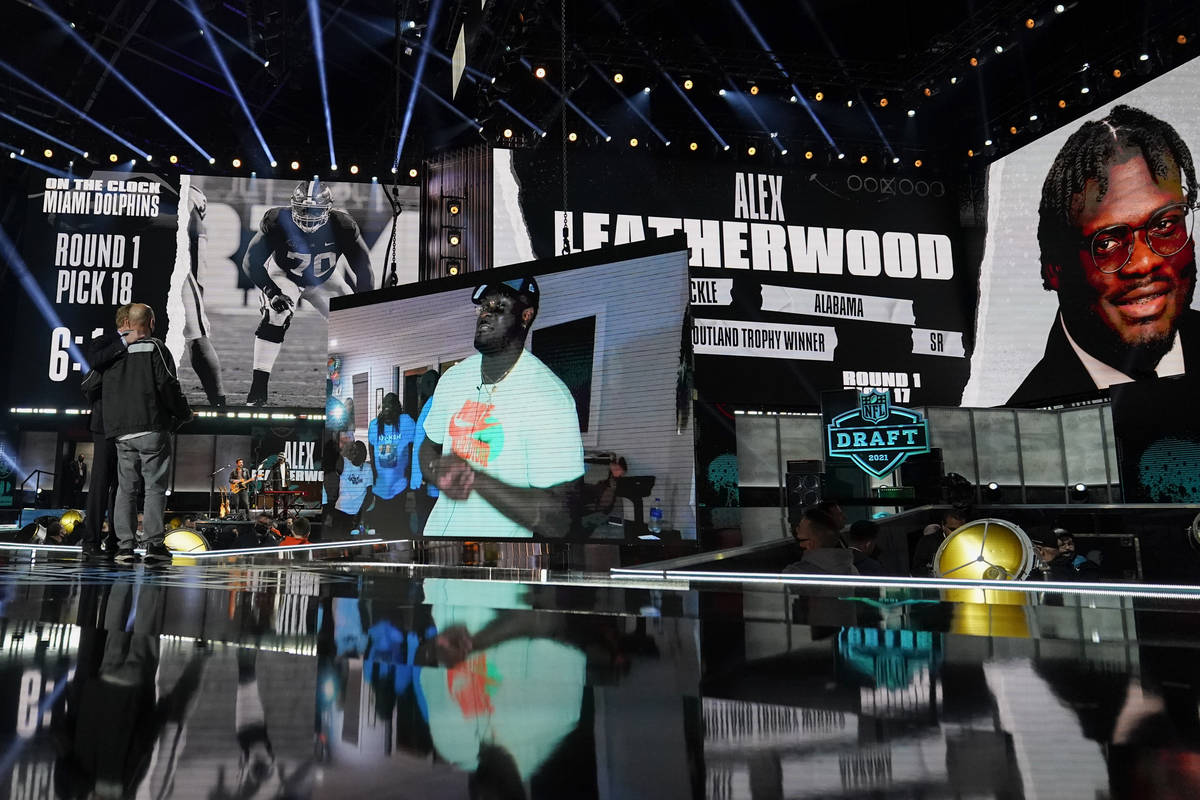 An image of Alabama tackle Alex Leatherwood is displayed on stage after he was chosen by the Las Vegas Raiders with the 17th pick during the first round of the NFL football draft, Thursday, April 29, 2021, in Cleveland. (AP Photo/Tony Dejak) 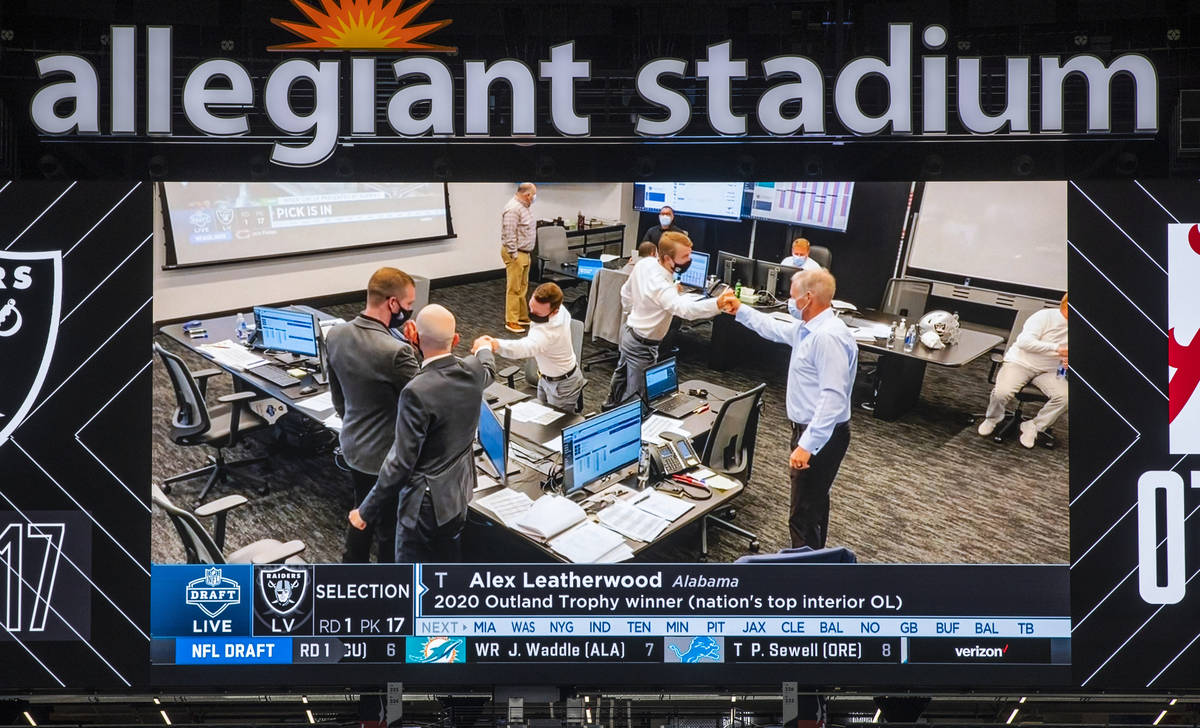 The draft room is all celebratory as Alex Leatherwood of Alabama is announced as the teamÕs first round pick during the 2021 Las Vegas Raiders NFL Draft Party at Allegiant Stadium on Thursday, April 29, 2021 in Las Vegas. (L.E. Baskow/Las Vegas Review-Journal) @Left_Eye_Images 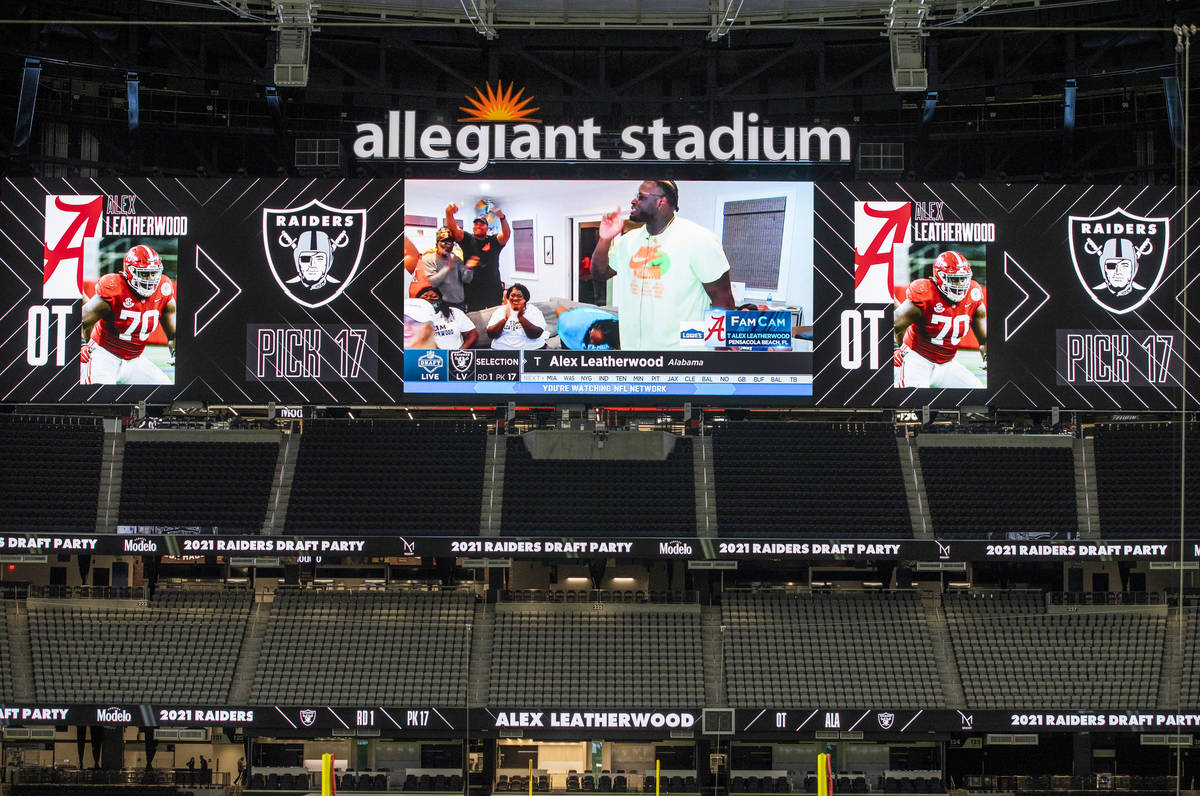 Alex Leatherwood of Alabama is shown on the screen while announced as the teamÕs first round pick during the 2021 Las Vegas Raiders NFL Draft Party at Allegiant Stadium on Thursday, April 29, 2021 in Las Vegas. (L.E. Baskow/Las Vegas Review-Journal) @Left_Eye_Images 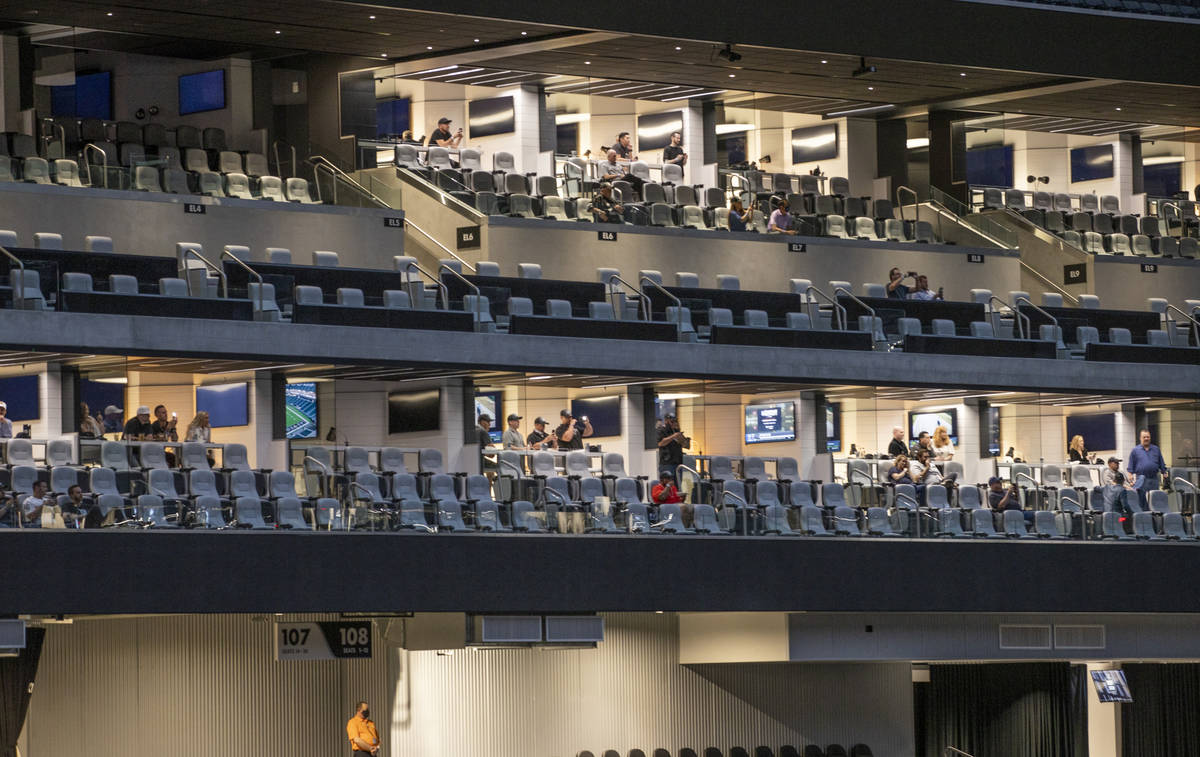 Fans look on from the boxes as the first pick is announced during the 2021 Las Vegas Raiders NFL Draft Party at Allegiant Stadium on Thursday, April 29, 2021 in Las Vegas. (L.E. Baskow/Las Vegas Review-Journal) @Left_Eye_Images 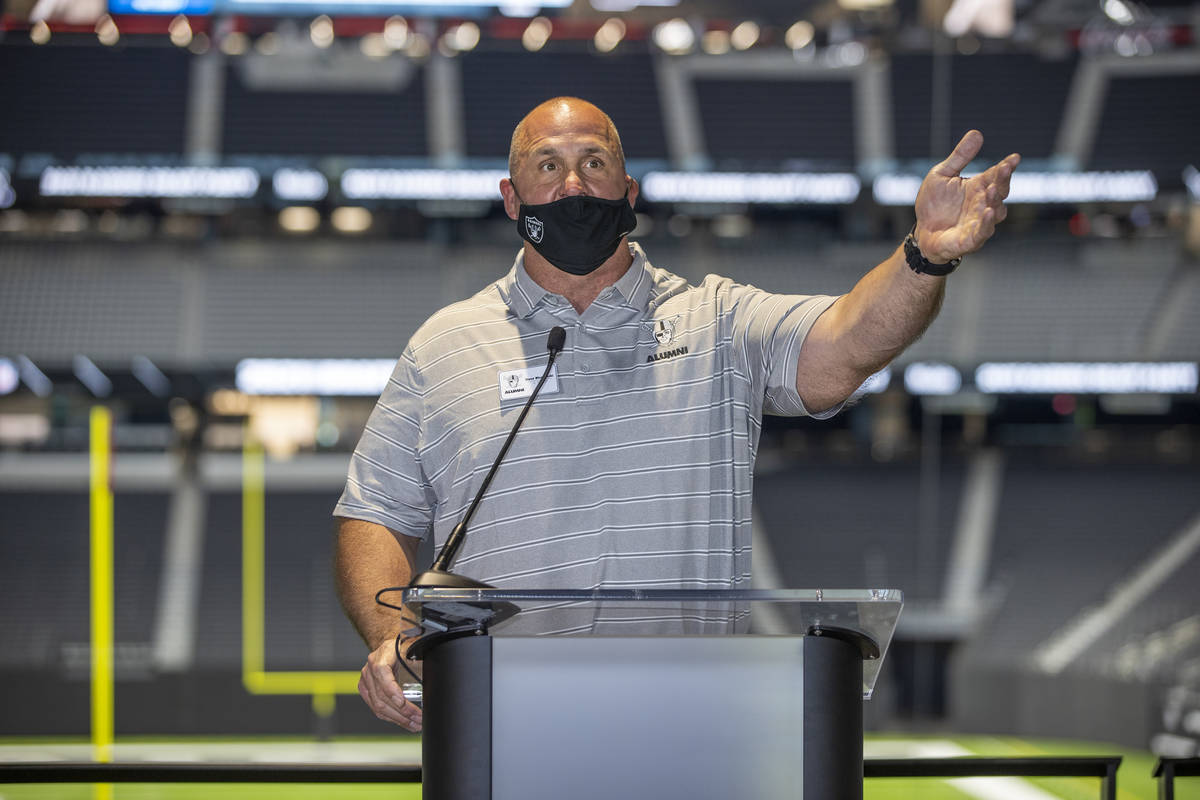 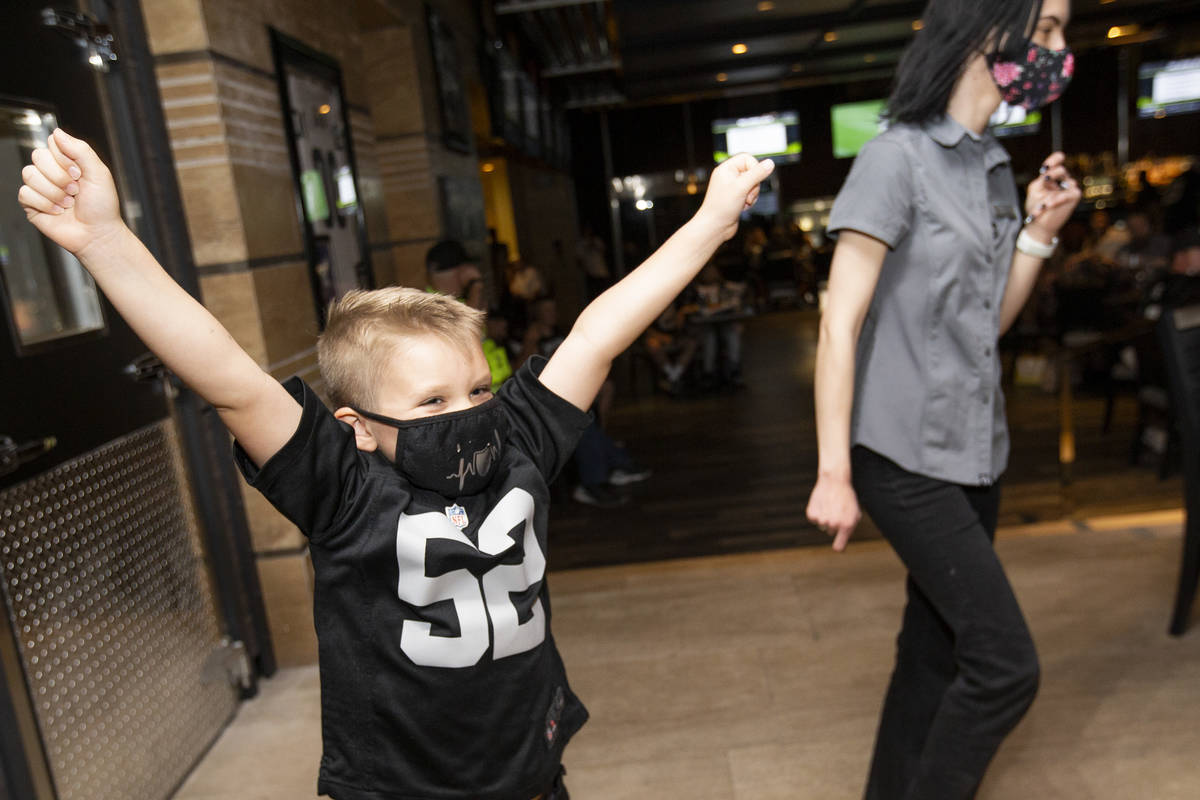 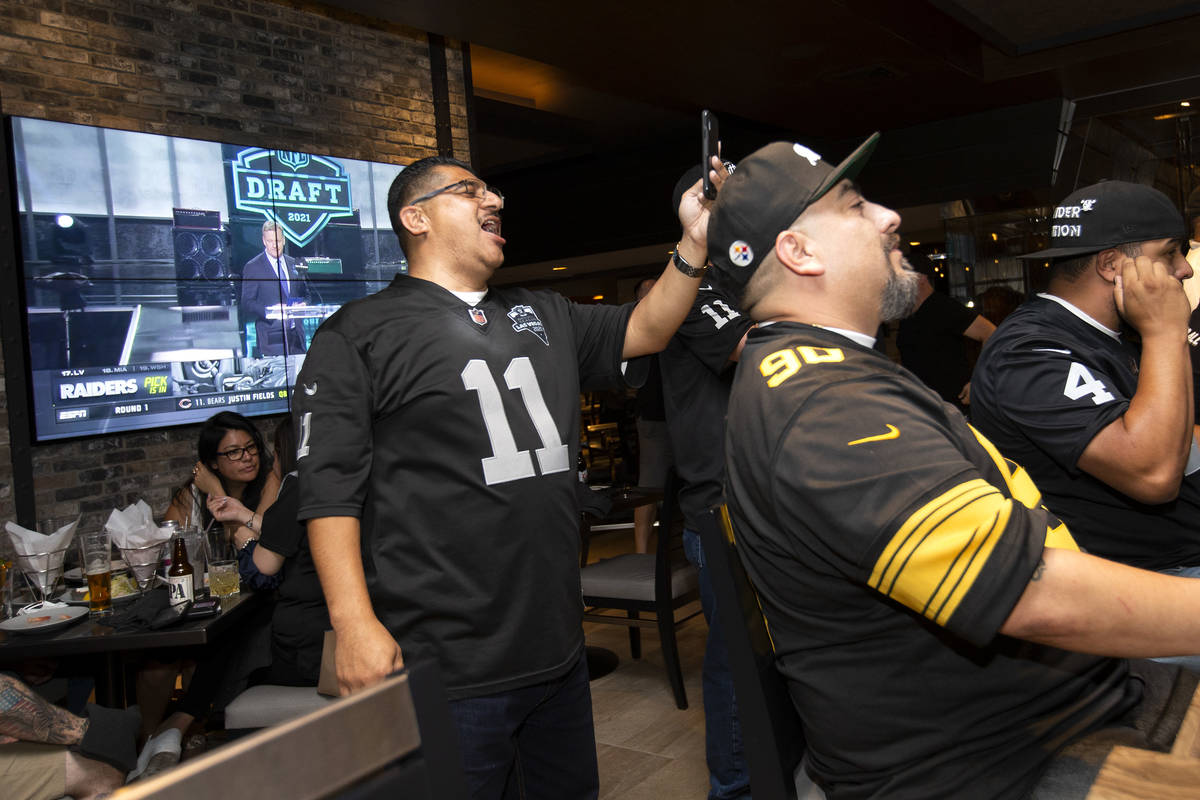 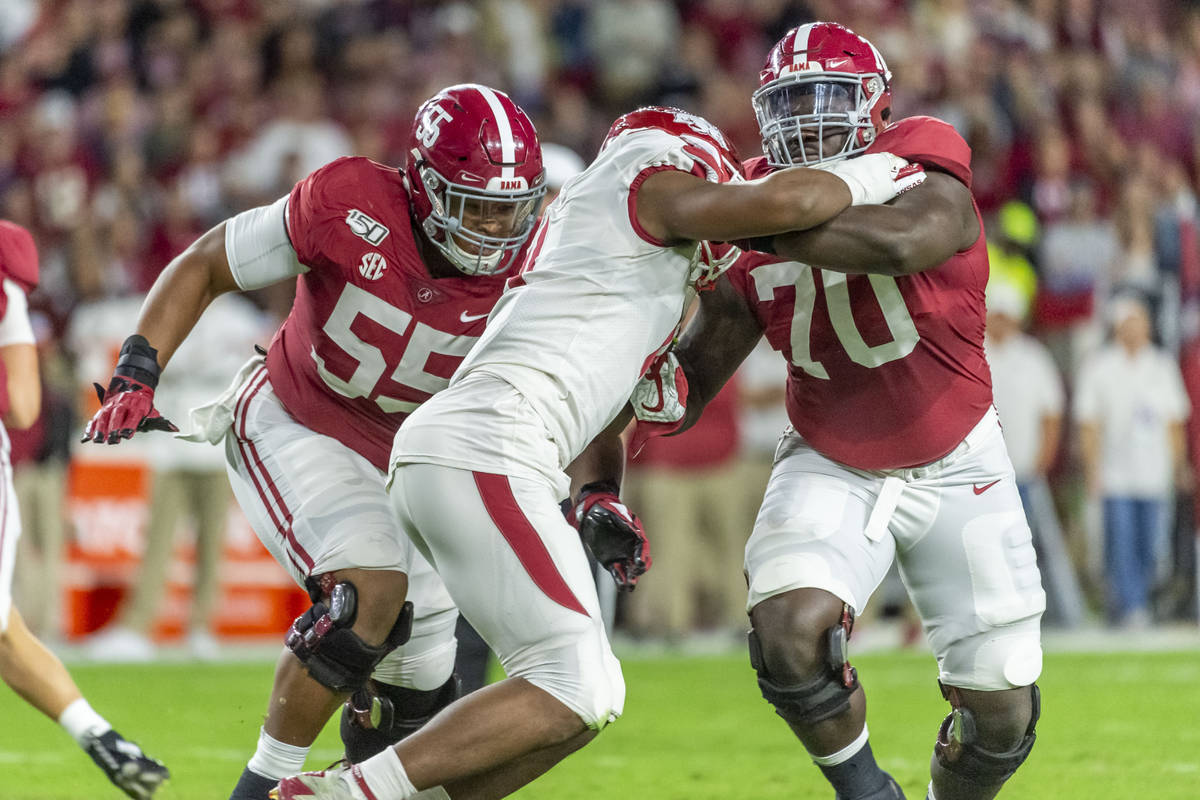 As has become a draft habit over the years, when everyone thought the Raiders were about to zig they abruptly zagged with their first-round pick on Thursday.

In selecting Alabama offensive tackle Alex Leatherwood with the 17th pick, they addressed their most glaring offensive need. No big surprise as far as the position. That was expected.

Their zag was more in whom they selected. With higher-ranked tackle prospects such as Virginia Tech’s Christian Darrisaw and Oklahoma State’s Teven Jenkins still available, the Raiders opted for Leatherwood, who was considered a fringe first-round selection by some analysts and a second-rounder, at best, by many others.

“We knew it would be controversial,” Raiders general manager Mike Mayock said. “We completely understand that.”

By going against the grain, they are putting faith not only in Leatherwood being the heir apparent at right tackle but also in offensive line coach Tom Cable to get Leatherwood ready to play sooner rather than later.

According to Mayock, Leatherwood became one of Cable’s favorite draft prospects immediately after watching his tape. The rest of the staff felt the same way after studying him as well.

As little credence as the Raiders put in the draft rankings, Leatherwood put even less. Which is why he didn’t act all that surprised when he came off the board much sooner than many predicted.

“I’m not the dude to like, fall in the media hype, mock drafts and all that good stuff,” said the 6-foot-5-inch, 312-pound Leatherwood from his home in Pensacola, Florida. “So I just did what I could do well, did the best I could do, and trusted the process. And it all went great.”

Time will tell if the Raiders made the right call. But just like Cle Ferrell and Johnathan Abram have work ahead of them to justify their 2019 first-round draft positions and Henry Ruggs and Damon Arnette face the same challenge to make right on their draft spots in the 2020 first round, so will Leatherwood.

He didn’t exactly seem fazed by that challenge. Nor by the naysayers.

“It definitely put a chip on my shoulder. It bothered me a little bit,” Leatherwood said. “But at the same time, I’m not a media guy. I’m not the type of dude to get caught up in all that garbage. Because I know what my film said about me.”

Leatherwood should get an early chance to make his mark. The Raiders traded right tackle Trent Brown last month, opening a gaping hole at that position and creating urgency to fill it. Leatherwood sounded confident he has the necessary attributes to make an immediate impact,

“I got all the intangibles,” he said. “Great speed. Great length. Great athleticism. All that good stuff.”

Leatherwood came to Alabama as a five-star high school recruit and was regarded as the best left tackle prospect in the country. After biding his time as a freshman on a loaded Alabama team, he earned a starting job as a sophomore in 2018 at guard. He moved to left tackle in 2019 and 2020.

By his senior year, he became the fifth Alabama player to win the Outland Trophy, which goes to the nation’s top offensive lineman, and earned unanimous first-team All-American honors.

His position versatility will be a bonus on an offensive line that underwent a massive overhaul since last year, giving the Raiders the luxury of playing him at either tackle or guard.

“As far as a position, we haven’t talked about it yet,” Leatherwood said. “And to be honest, it doesn’t matter. I’m just happy and excited to be a Raider. I’m going to be the best at whatever position I play.”