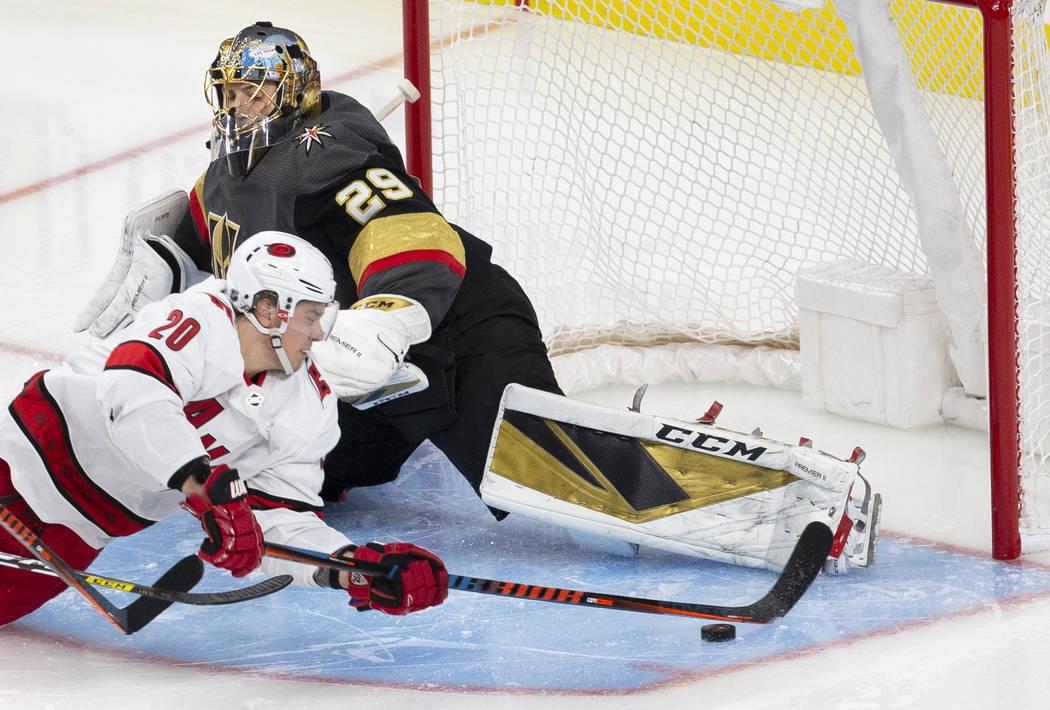 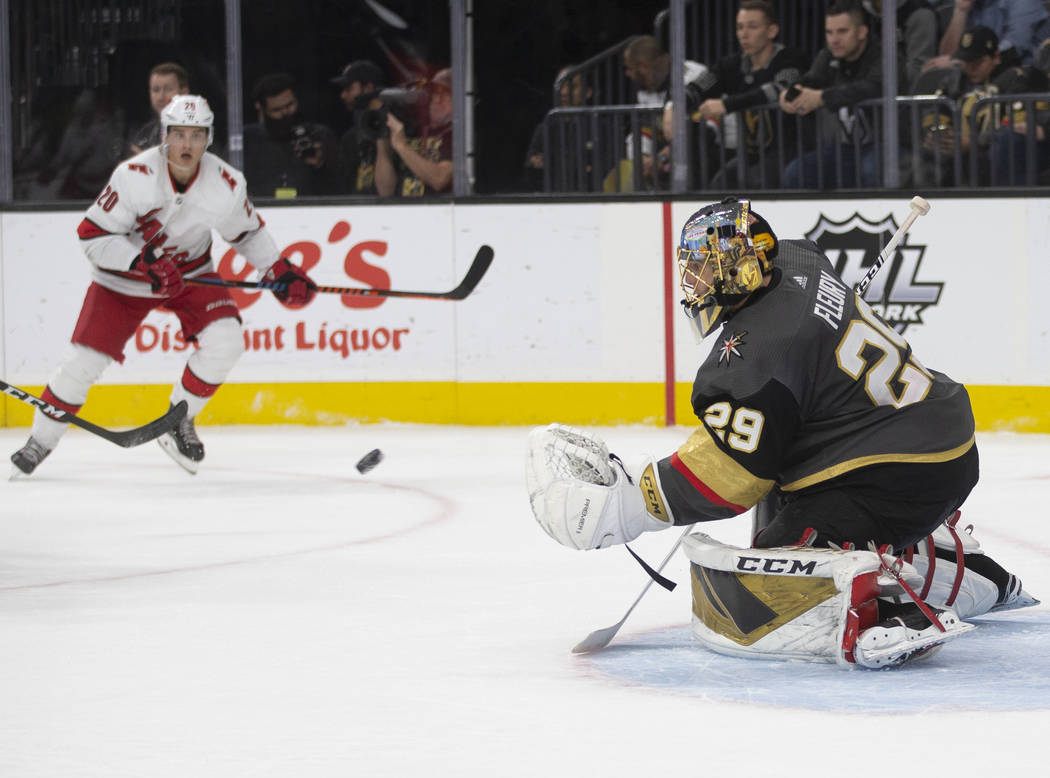 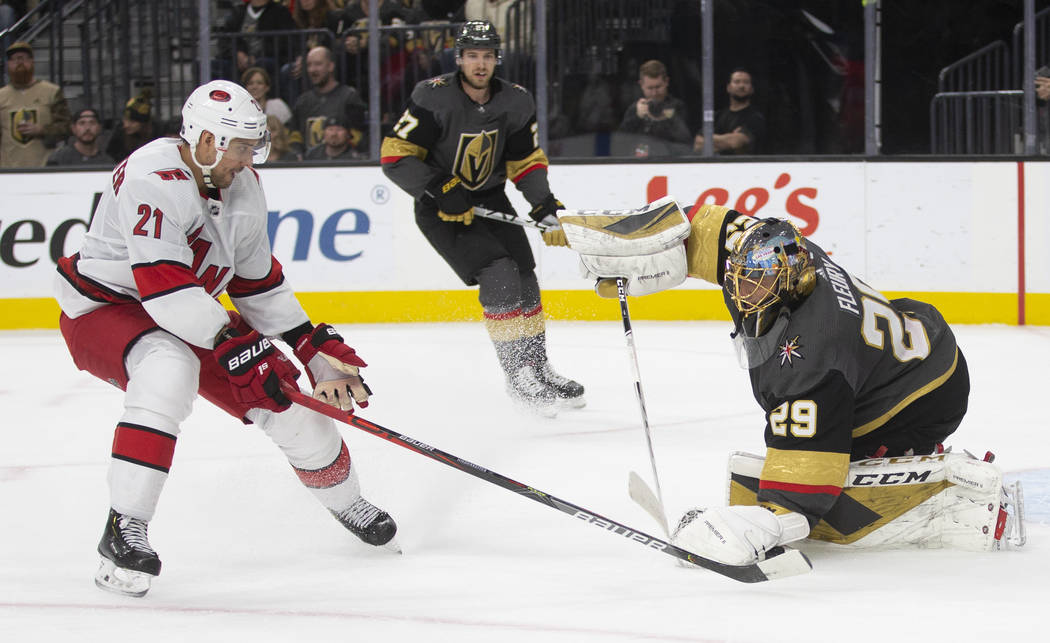 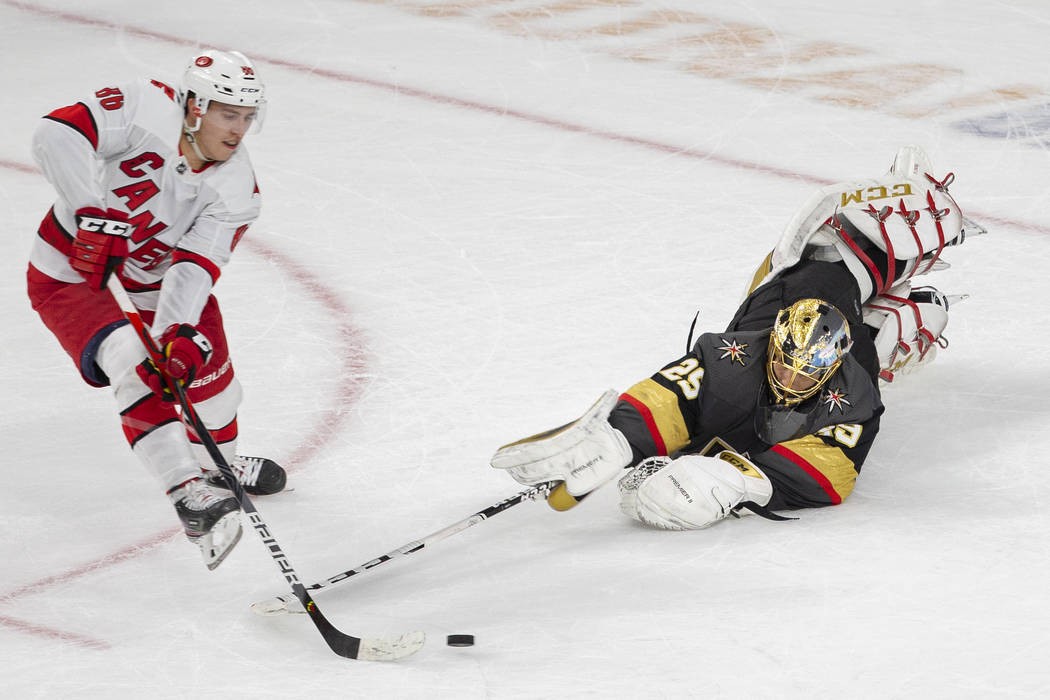 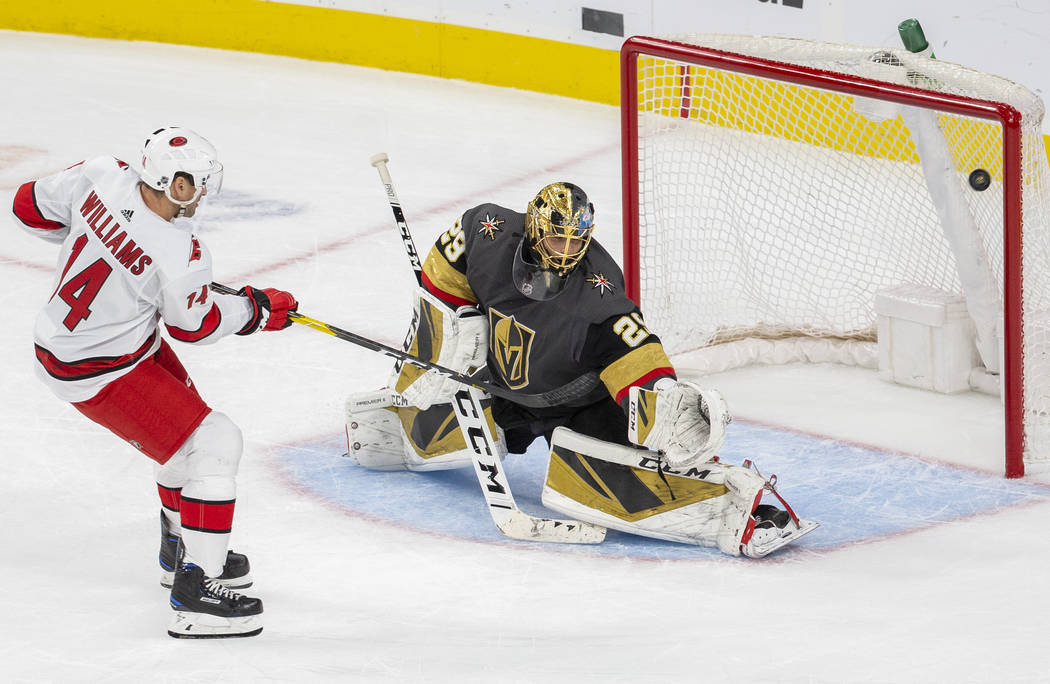 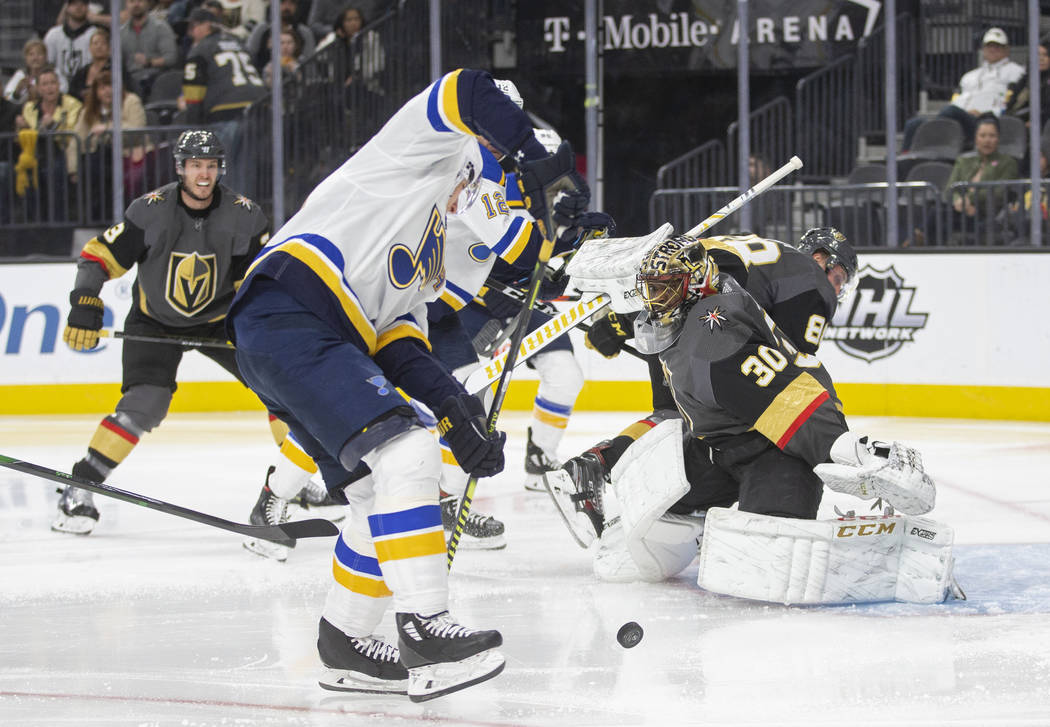 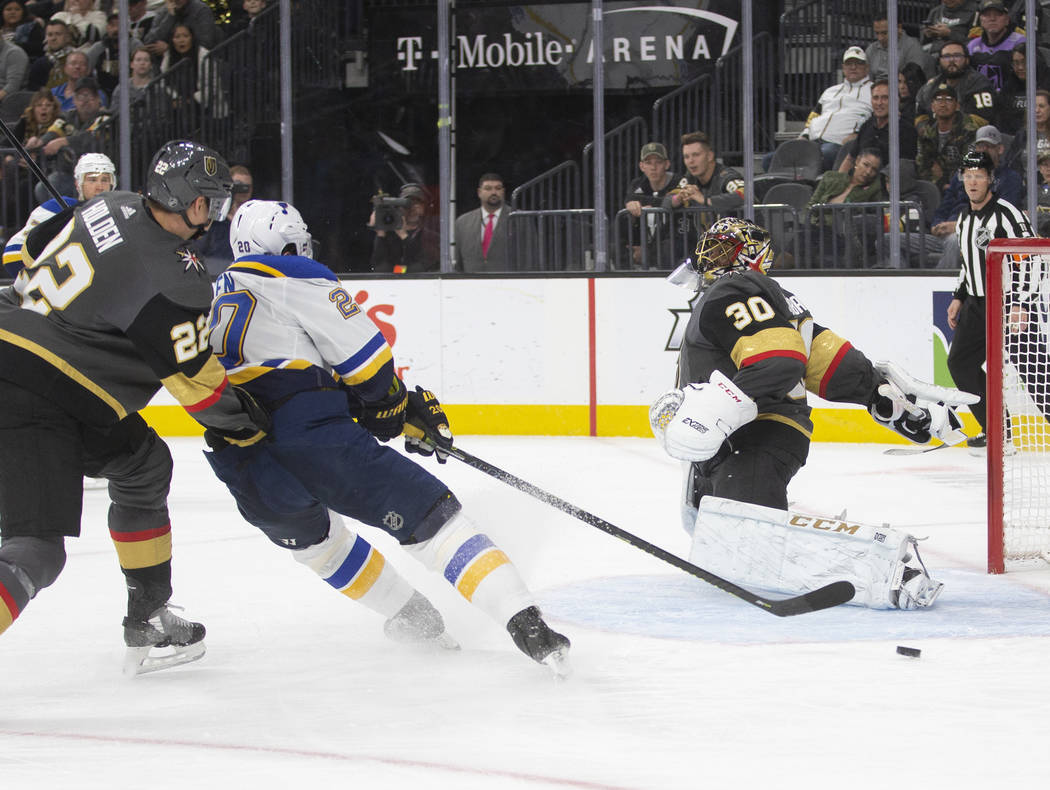 Malcolm Subban was in net for the Golden Knights on Thursday night at T-Mobile Arena, the winning goaltender in a thrilling 6-5 overtime win over the Stanley Cup champion St. Louis Blues.

Afterward, the media waited to speak with Subban about what was his eighth victory of the season.

He declined comment, a surprise given how little he plays.

Here we are: The Knights are in a pickle when it comes to their goalies.

The Knights continue what is a more-than-challenging homestand when engaging the New York Islanders on Saturday night.

I suppose starter Marc-Andre Fleury, who took part in an optional skate Friday, will be back in net.

Unless he’s hooked up to an IV.

Even then, they’d probably wheel him out there.

Subban got the call against St. Louis because Fleury was sick, meaning had he been healthy, the Knights would have started him for the 16th time in the past 18 games.

And one of those misses was a one-game suspension for skipping the All-Star Game.

It isn’t the first time Fleury’s workload has been rightly questioned, a debate dating to last season. Things were supposed to be handled differently this season, or at least that’s what the team indicated.

Fleury has started 40 of 59 games despite the fact that, since 10 or so supreme efforts to begin the season, his numbers have decreased dramatically.

Despite the fact that, like most goalies, Subban has proven far better when afforded a series of starts.

It doesn’t sound like much work for Fleury or most NHL starters, until you remember he’s 35.

Now, history suggests a goalie can win the Stanley Cup at Fleury’s age and even beyond, but the evidence is far from overwhelming. A handful have done so in the post-1967 expansion era.

Even ol’ Gump Worsley did so for Montreal at 38 and 39 in the late 1960s, not a fact I care much about, but for the chance to type Gump as someone’s name.

Plus, he refused to protect his head, once telling reporters, “My face is my mask.”

Gump, obviously, was a complete lunatic.

Stats are hardly the sole metric by which a goalie should be evaluated. Goals often can be the fault of players other than those wearing blockers.

Take two of the first three goals against Subban on Thursday, a direct result of atrocious defensive coverage. The Knights in those moments were worse than a lazy kid at the Y who refuses to pick up his man during a lunchtime hoops run.

But the fact remains that Fleury has just three wins in his last 11 starts and has allowed nine goals in his past two.

Those are numbers of being tired, whether mentally or physically or both.

There is no question Fleury was deeply affected by the death of his father in November. There is also no debate that goalie isn’t the only position in a funk, or haven’t you been watching most of the defensemen?

Translation: It’s mostly a group effort to be fighting for a playoff spot.

The management duo of George McPhee and Kelly McCrimmon, depending on how the season plays out, will be judged on the bizarre Jan. 15 firing of coach Gerard Gallant. So, too, will Pete DeBoer, Gallant’s replacement, on how Fleury plays down the stretch and how it directly influences where the Knights finish.

DeBoer is obviously all-in on Fleury, much like when management made an understandably emotional and yet highly questionable business decision in signing the goalie to a three-year contract extension in 2018.

Then again, DeBoer spent the last several seasons watching Martin Jones in net with San Jose, so Fleury must seem like a godsend.

This is also three-time Cup champion Marc-Andre Fleury, so the idea he could suddenly rediscover a magical touch beginning Saturday, laugh in the face of Father Time and ultimately lead the Knights deep into the playoffs isn’t nuts.

We know he will be given the opportunity and then some.

And then some more.

I mean, Fleury and Gump Worsley were both born in cities of the Quebec province.

And, better yet, Fleury actually wears a mask.