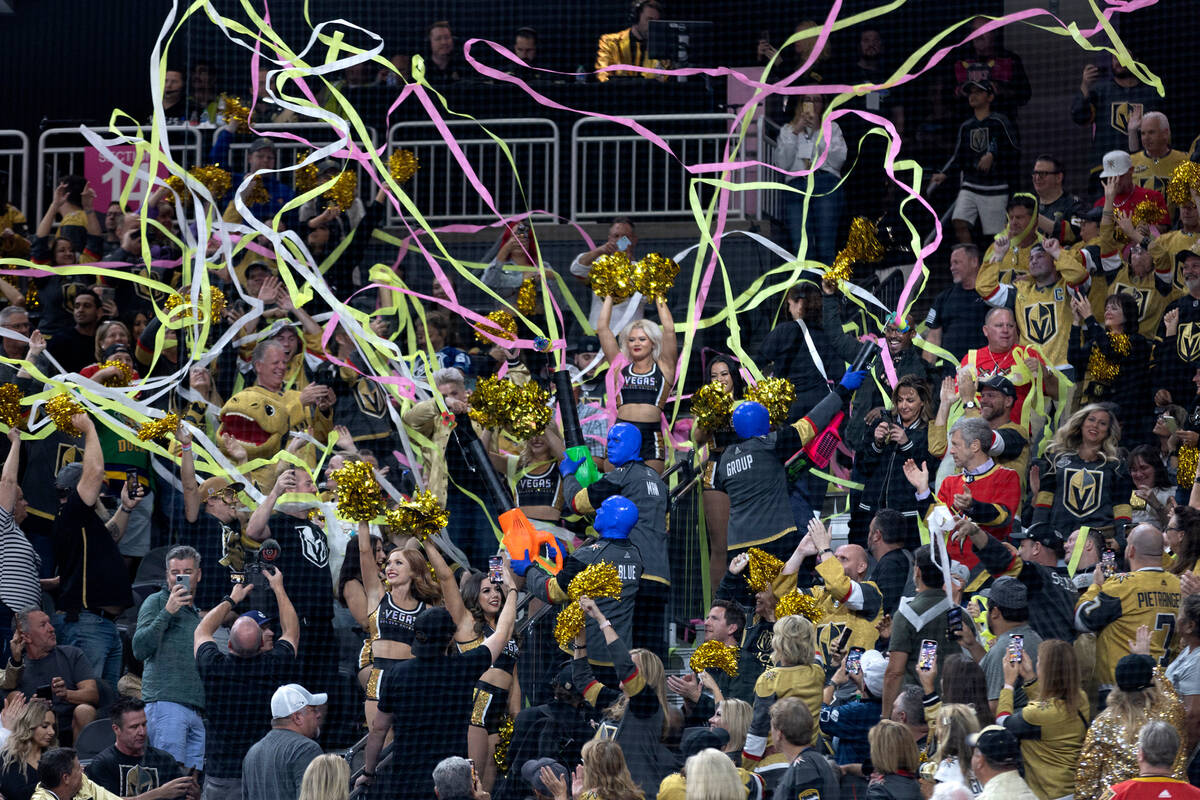 The Blue Man Group pumps up the crowd with confetti during the third period of an NHL hockey game between the Golden Knights and the Blackhawks at T-Mobile Arena on Thursday, Oct. 13, 2022, in Las Vegas. (Ellen Schmidt/Las Vegas Review-Journal) @ellenschmidttt 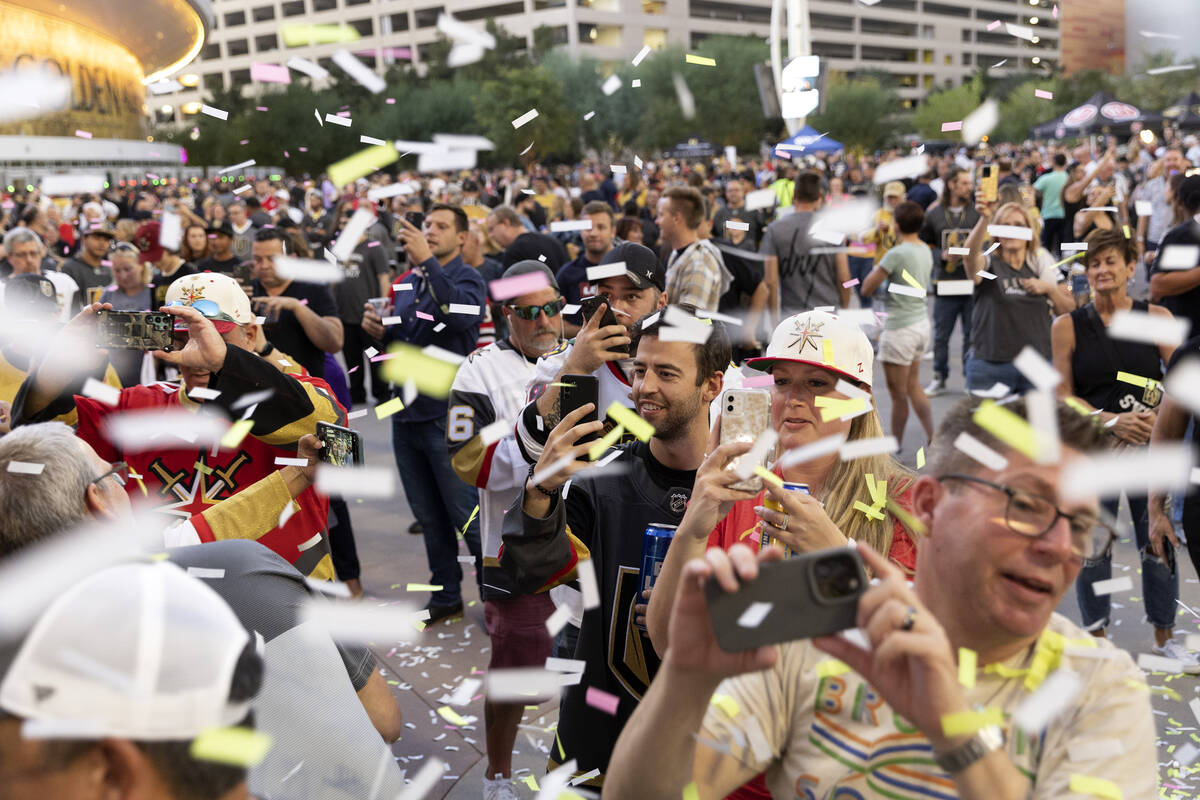 Confetti rains down on fans before an NHL hockey game between the Golden Knights and the Blackhawks at T-Mobile Arena on Thursday, Oct. 13, 2022, in Las Vegas. (Ellen Schmidt/Las Vegas Review-Journal) @ellenschmidttt 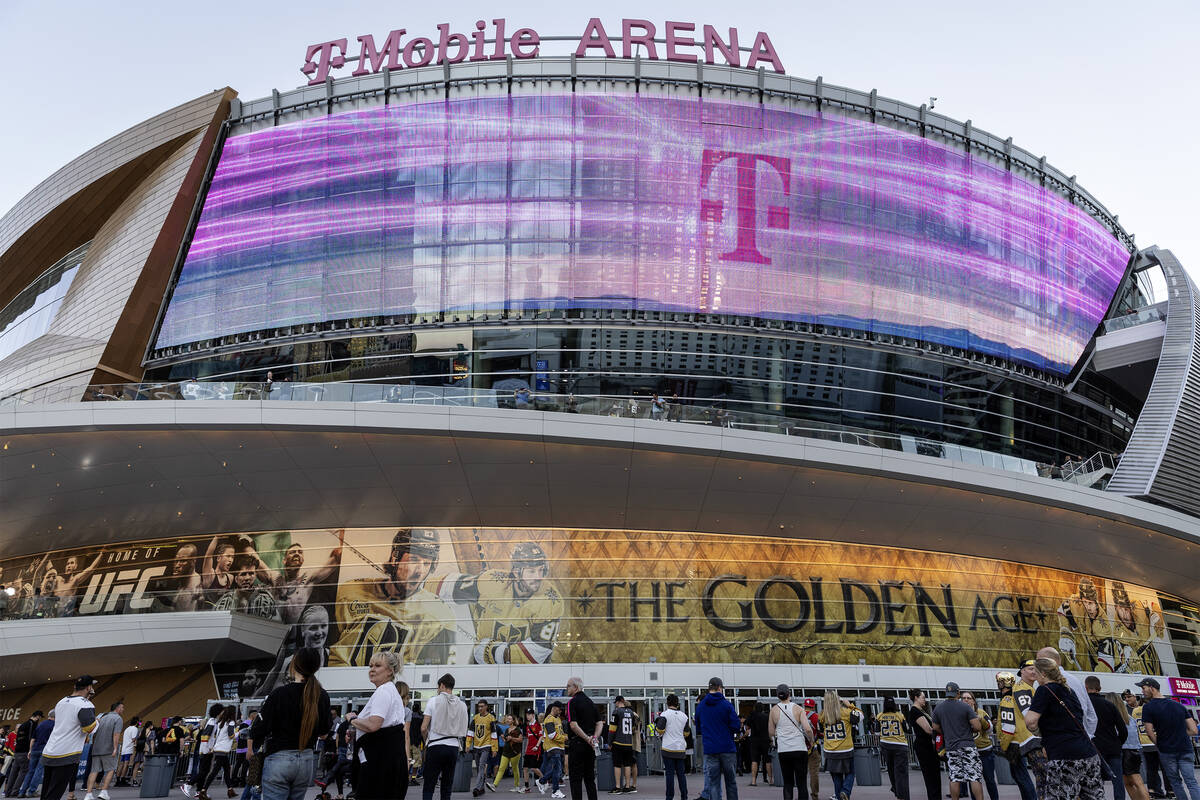 Fans file into T-Mobile Arena before an NHL hockey game between the Golden Knights and the Blackhawks on Thursday, Oct. 13, 2022, in Las Vegas. (Ellen Schmidt/Las Vegas Review-Journal) @ellenschmidttt 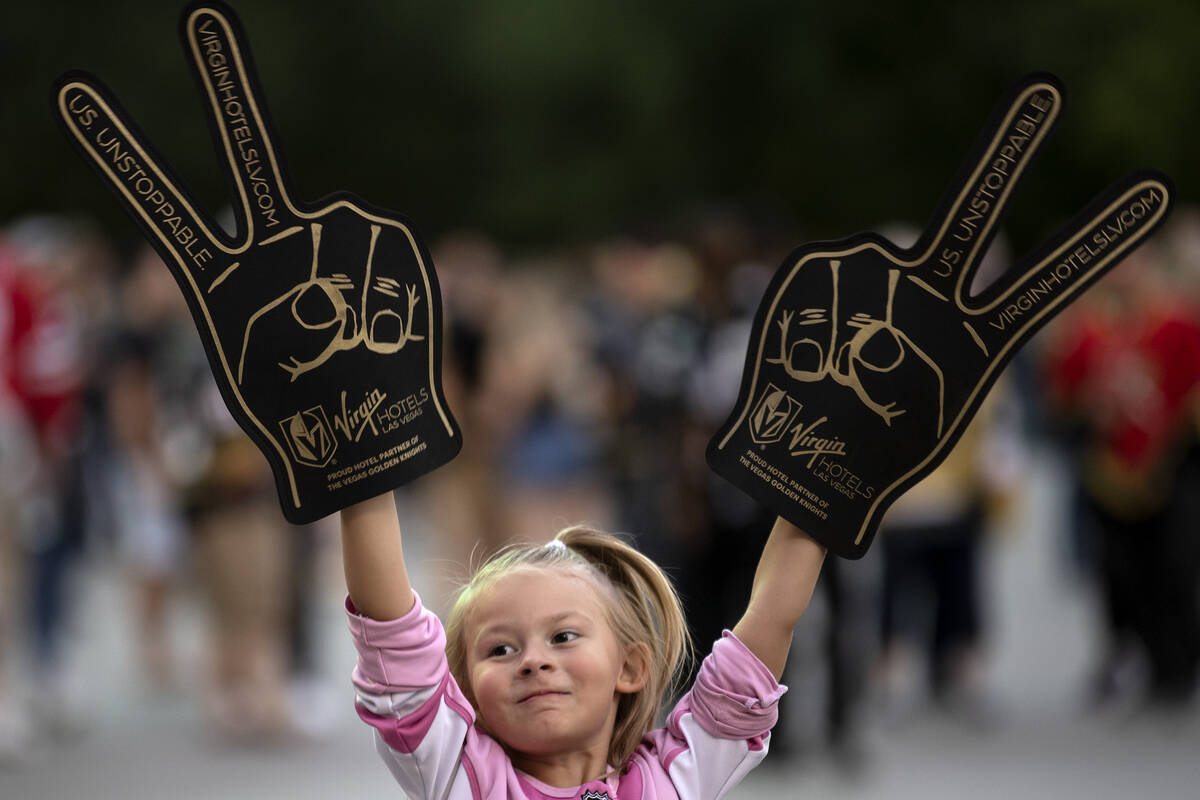 Madison Lee, 6, dances during the pregame show before an NHL hockey game between the Golden Knights and the Blackhawks at T-Mobile Arena on Thursday, Oct. 13, 2022, in Las Vegas. (Ellen Schmidt/Las Vegas Review-Journal) @ellenschmidttt 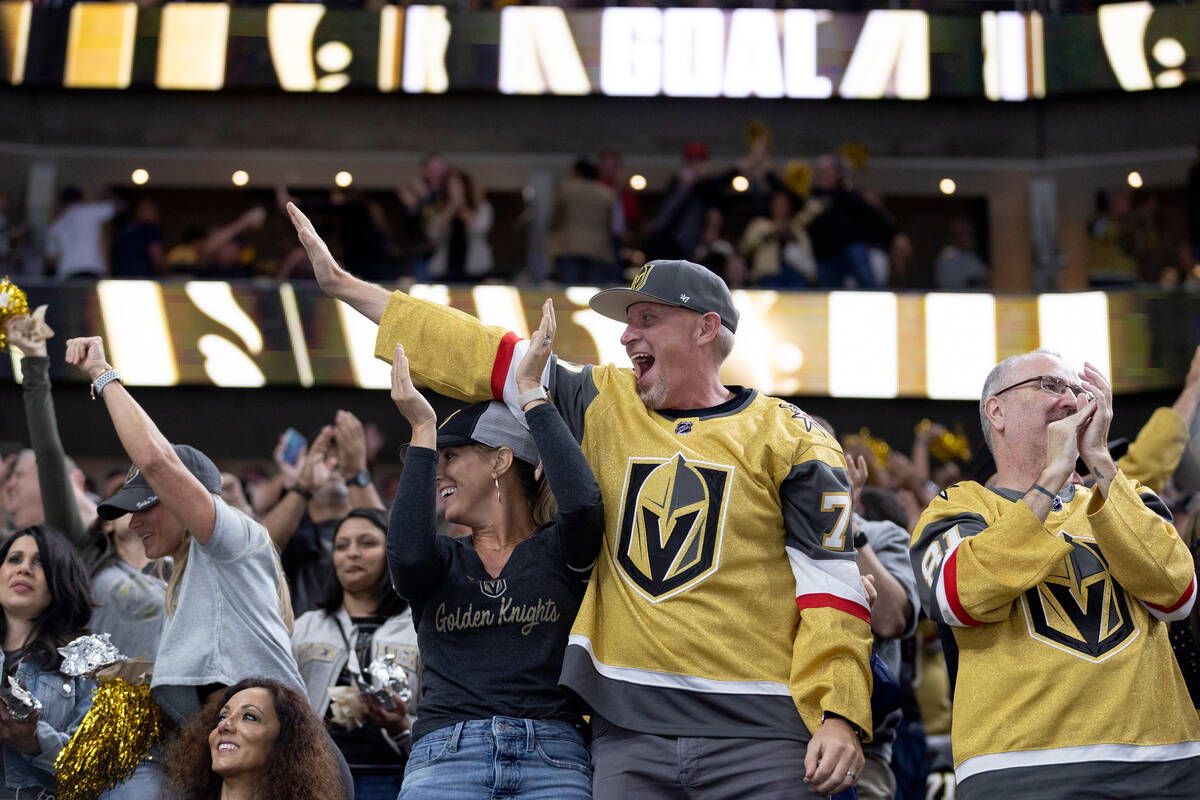 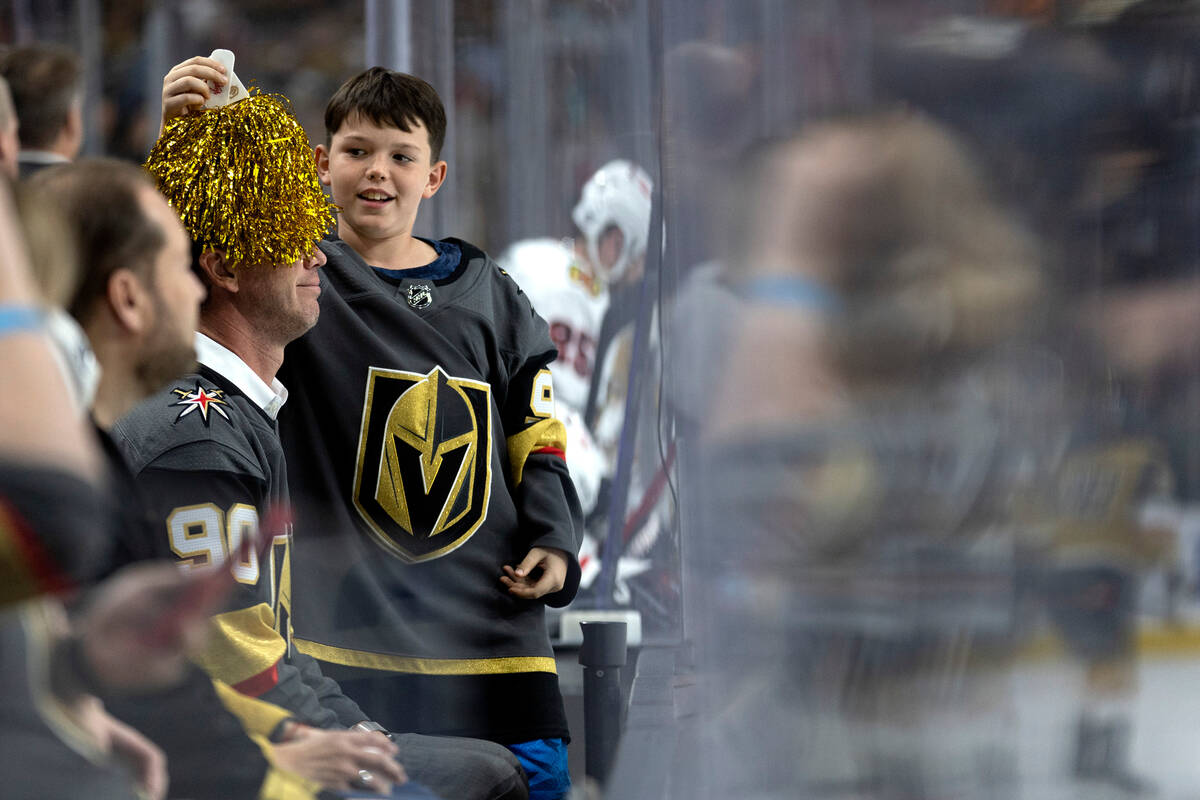 A young Golden Knights fan goofs off with a pom pom during the third period of an NHL hockey game against the Blackhawks at T-Mobile Arena on Thursday, Oct. 13, 2022, in Las Vegas. (Ellen Schmidt/Las Vegas Review-Journal) @ellenschmidttt 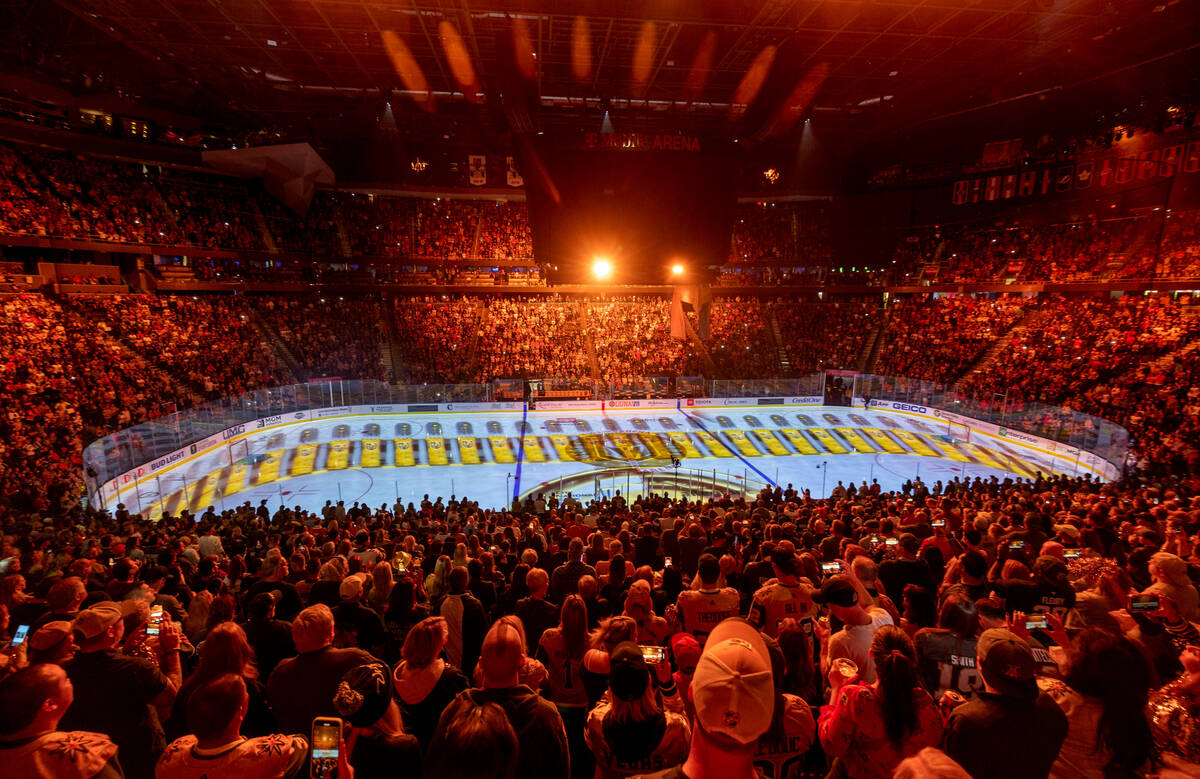 The opening ceremonies begin for the Golden Knights versus the Chicago Blackhawks for the first period of their NHL game at T-Mobile Arena on Thursday, Oct. 13, 2022, in Las Vegas. (L.E. Baskow/Las Vegas Review-Journal) @Left_Eye_Images

Mike Sims is a sports fan. He understands the ebbs and flows of it, the ups and downs, the roller coaster of emotions that come with supporting one’s favorite team.

His hockey allegiances are to the Golden Knights.

He also knows that things don’t always go as one would hope.

“I think the Knights winning as much as they did out of the gate when they got here (in 2017) really helped,” said Sims, a Summerlin resident. “They continue to put an entertaining product on the ice. The fans are different. There is a certain loyalty with them.

“It’s not like your typical (UNLV) Rebels fan, who has to work their way back into it.”

Anyone who believed that missing the playoffs for the first time in franchise history last season might have dampened the spirit of those who support the Knights didn’t attend a home opener against Chicago on Thursday night before 18,467 at T-Mobile Arena.

They didn’t stand in line at a Gold Carpet arrival ceremony to gather autographs and pictures and high-fives from players.

They didn’t enjoy yet another pregame theatrical performance entitled, “Welcome to The Golden Age,” where things like a new era, a new age, one with possibilities and beginning anew were major themes.

They didn’t hear that thunderous “Knight!” during the national anthem.

It’s not the worst thing. Demonstrating to fans that reaching the postseason is hardly ever assured. That in the world of professional sports, things like missing 500 man games to injury can really put a damper on those Stanley Cup hopes.

Upset the Knights missed out?

Frank Simone is also from Summerlin. He never cared about sports in the least before the Knights arrived. Never gave it a second thought. Like, ever.

“Now,” said his daughter, Kaitlin, “he can recognize every player just by looking at his face and is getting here at 3 p.m. for a Gold Carpet arrival.”

Frank watched on television a season-opening 4-3 win against the Kings on Tuesday night.

“Back to normal,” he said. “Like how they connected. I remembered that kind of cohesiveness. Yes. Those are the Golden Knights that I remember.”

Ah, yes. From those joyous and memorable and bygone days of … two years ago?

The Golden Knights of Thursday …

■ It was an eventful first period for goalie Logan Thompson, who was stellar over the opening 20 minutes. The rest of his teammates weren’t.

Thompson faced 11 shots and made more than a few memorable stops. He’s the reason things were scoreless.

■ Paul Cotter wore a fedora to the Golden Carpet arrival.

He took a bad hooking penalty in the offensive zone and then jumped out of the box to score off a 2-on-1 break for a 1-0 Knights lead at 8:44 of the second period.

■ Thompson would earn a shutout by stopping all 27 shots, but the real drama came when the Golden Knights missed at least two open nets with the puck line still in balance.

This was Knights coach Bruce Cassidy on Thursday morning previewing the night’s festivities:

“Like with any game, you’re always going to have your checklist to prepare your team,” he said. “Now you have the Opening Night stuff. We want the players to keep their focus and enjoy it. It’s a nice experience, and then you get ready for the puck drop.

“You take it for what it is — which is nice for the fans — and then get to the game.”

They got to it, all right. Enjoyed what happened beforehand and then how it unfolded.

Except those who had the Knights on the puck line.