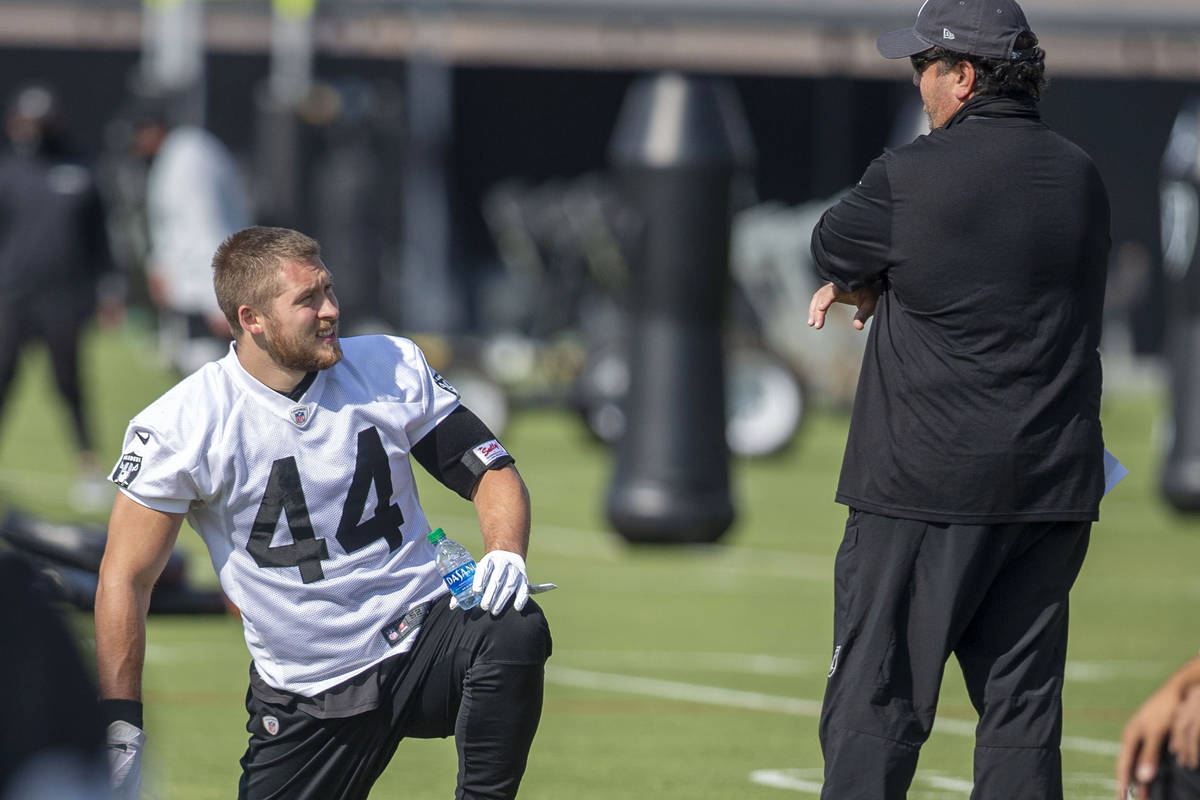 I wonder why Ronald Reagan wasn’t a linebacker when playing at little ol’ Eureka College in Illinois. He was, after all, the Great Communicator, and talking is a must in the middle of a defense.

The Raiders want Nick Kwiatkoski to do more of it.

He wasn’t the shiniest of free-agent signings with Las Vegas this past offseason, but Kwiatkoski of late has more than shown his worth.

The Raiders begin the second half of their season against Denver at Allegiant Stadium on Sunday, when the real push for a playoff berth begins. With Las Vegas, defense is always the wild card in such discussions. In other words, at what level it will actually play in a given week.

Linebacker wasn’t just a position of need last year. It cried out for a total makeover. But while landing All-Pro talent Cory Littleton made for flashy headlines, it is Kwiatkoski who has made the biggest impact.

“Yeah, he’s really important to us,” Raiders head coach Jon Gruden said. “I think the more he’s been around, the more communicative he is becoming. He’s not really a loud, screaming, yeller type. We need our middle linebacker to give reminders, checks and alerts.

“I think the more that he’s played, the more that’s coming out of him. His leadership. His playmaking. His intensity. Those are things that we feed off of. We need a lot more from him down the stretch, that’s for sure.”

The contract is for three years at $21 million, of which $13.75 million is guaranteed. For this, Kwiatkoski wears the green dot as the one who receives calls and instructions from coaches, from which he then imparts to teammates.

Feared. Intimidating. Ferocious. Driven. Physical. Forceful. Rugged. Angry. Durable. Emotional. All have been used over time to describe the middle linebacker position. But none might be more significant than, well, loud.

It’s one thing to arrive for an ordinary offseason with the expectations of being a leader. It’s quite another to do so during a pandemic. Inserting your voice just isn’t the same over a laptop during virtual workouts as it would be in live minicamps.

He was a rotational player who started eight games for the Bears last year, drafted in the fourth round by Chicago out of West Virginia in 2016. But he sought a bigger role following the best year of his young career. That’s where Las Vegas came in.

Kwiatkoski was injured (pectoral) in the season opener at Carolina and then missed the following two games. But he has been better and better since returning, recording a team-high 13 tackles in a 31-26 win at the Chargers last Sunday.

“I’ve never been the rah-rah type of guy, but it’s something you need from the middle linebacker,” Kwiatkoski said. “It’s all about communication in pregame, during the game, in practice. Just being more vocal. Speaking up. Getting the calls as a leader. Getting feedback from the guys.”

Littleton was the one who would supposedly turn heads. But he has struggled most of the season, was placed on the COVID-19 list this week and won’t play against Denver.

Kwiatkoski has been the team’s best linebacker — and player, really — in coverage by a long shot, an area where Littleton had been predicted to upgrade the Raiders substantially. But thing don’t always work out as forecast.

So as one free-agent signing in the middle of the field tries to find his game, another has seen his take off. It’s something of which a struggling defense needs more.

“Just comes down to repetition,” Kwiatkoski said. “It was obviously a little different offseason program and camp setup. But as season goes on and the more reps I get, the more comfortable I feel. We still have a long ways to go, so I just need to build off that.”

It all begins with talking. And then more of it.

3
How to watch Raiders vs. Eagles