In a Thursday, Dec. 8, 2016 file photo, Oakland Raiders quarterback Derek Carr (4) throws during the first half of an NFL game against the Kansas City Chiefs in Kansas City, Mo. (AP Photo/Ed Zurga, File) 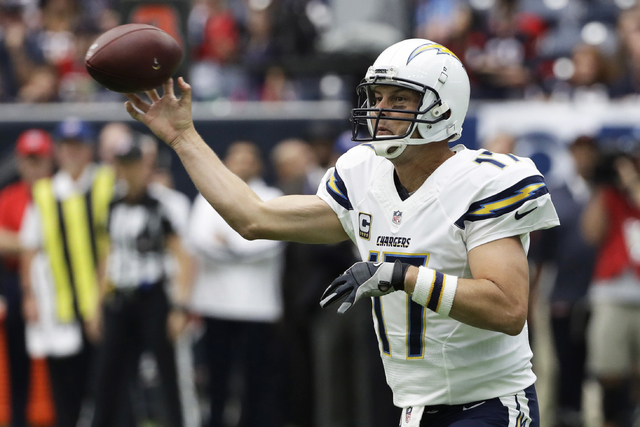 In this Sunday, Nov. 27, 2016, file photo, San Diego Chargers quarterback Philip Rivers passes against the Houston Texans during the first half of an NFL football game in Houston. The Chargers would like to think that, even at 5-6, they've got a chance to make the playoffs. (David J. Phillip, File/AP)

Despite recent appearances, Philip Rivers is not a quitter. He has not mailed in the season with an eye on the future.

It does appear the Chargers are ready to quit on San Diego, however. After years of failed stadium negotiations, the team seems set to move to Los Angeles next year. That was one takeaway from this week’s NFL owners meeting in Irving, Texas.

Another takeaway: The league is warming up to Las Vegas, which is close to luring the Raiders away from Oakland.

So the stage is set for the Relocation Bowl on Sunday, when the Chargers host the Raiders at Qualcomm Stadium. That’s where the rowdy fans in silver and black figure to give the road team a home-field advantage.

Rivers and the Chargers bid an emotional farewell to San Diego last December, only to return for another season. It was another disappointment. The Chargers (5-8) will miss the playoffs for the sixth time in the past seven years.

The Raiders (10-3) are smelling a playoff spot for the first time in 14 years. Although he’s unlikely to be voted Most Valuable Player, quarterback Derek Carr is in the conversation. Outside linebacker Khalil Mack, who has a sack in eight straight games, has emerged as one of the league’s defensive stars.

Carr has 24 touchdown passes with five interceptions, but he’s off his worst game of the season, hitting on only 17 of 41 passes for 117 yards in a 21-13 loss at Kansas City on Dec. 8. On a cold night, Carr threw with less accuracy and velocity while obviously bothered by a dislocated finger. He should get a better feel in warmer weather.

The immobile Rivers could be easy prey for Mack’s sack attack. Rivers has thrown 10 interceptions in his past four games. Rivers is still fighting, trying to carry a San Diego offense that will be without injured running back Melvin Gordon this week after losing playmakers Danny Woodhead and Keenan Allen early in the season.

The Chargers are 1-9 in the AFC West the past two seasons, and all motivational factors in this game favor the Raiders.

I don’t expect Rivers to go down easily, but I’ll lay the points with the Raiders, who are 5-1 on the road. The number dropped to 2½ at a few books Friday, yet the consensus line is minus-3.

RAVENS (-6) over Eagles: Baltimore is in a must-win situation, but that alone is not a good reason to play a side. It has been a good idea to fade Philadelphia, which has lost and failed to cover six of its past seven. Carson Wentz is suffering through the problems that plague most rookie quarterbacks. The Ravens will be focused on bouncing back after their defense was torched by Tom Brady.

BEARS (+6) over Packers: Aaron Rodgers has the hot hand, winning three in a row since he predicted Green Bay could run the table. He could get cooled off by an improving Chicago defense and subzero temperatures at Soldier Field. The Packers own this series, and this is a tough bet to make, but the Bears were in position to win their past three games with Matt Barkley at quarterback.

Patriots (-3) over BRONCOS: Brady went 0-2 in Denver last season. I’ll bet against him dropping three straight to the Broncos, who are flawed offensively and sure to struggle against Bill Belichick’s defense. New England is chasing the AFC’s No. 1 seed, so there’s no reason for a letdown.

Panthers (+6½) over REDSKINS: Carolina could call its quits, but look for quarterback Cam Newton and middle linebacker Luke Kuechly to show up on the Monday night stage. Kuechly is on track to return from a concussion. I made the line 4, so I’ll give the Panthers a shot.