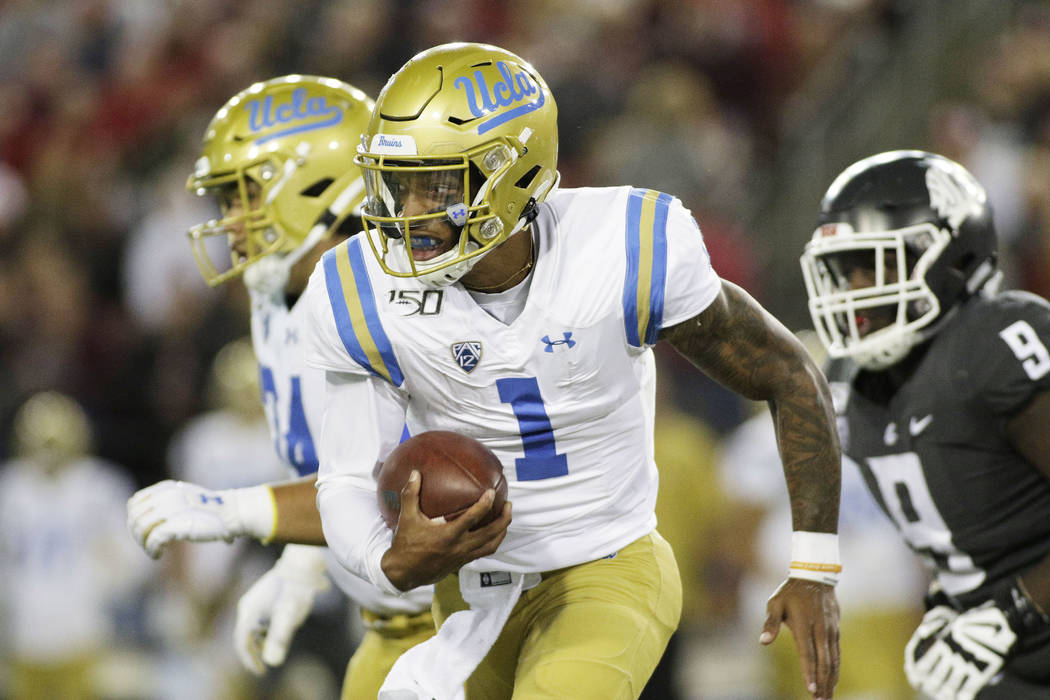 UCLA quarterback Dorian Thompson-Robinson (1) runs with the ball during the second half of an NCAA college football game against Washington State in Pullman, Wash., Saturday, Sept. 21, 2019. (AP Photo/Young Kwak) 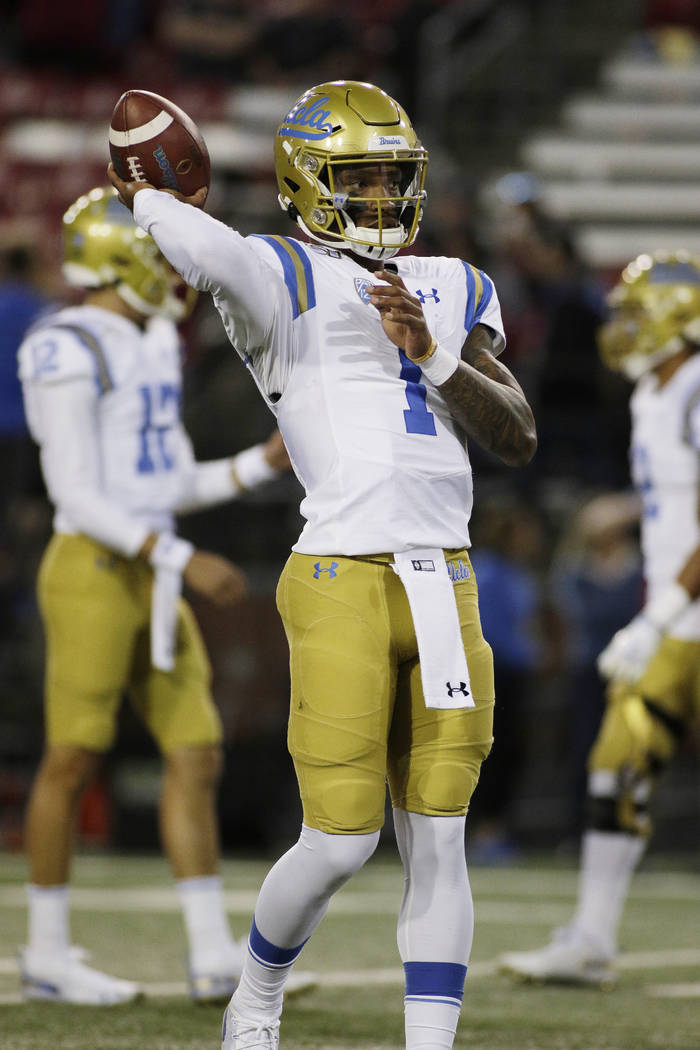 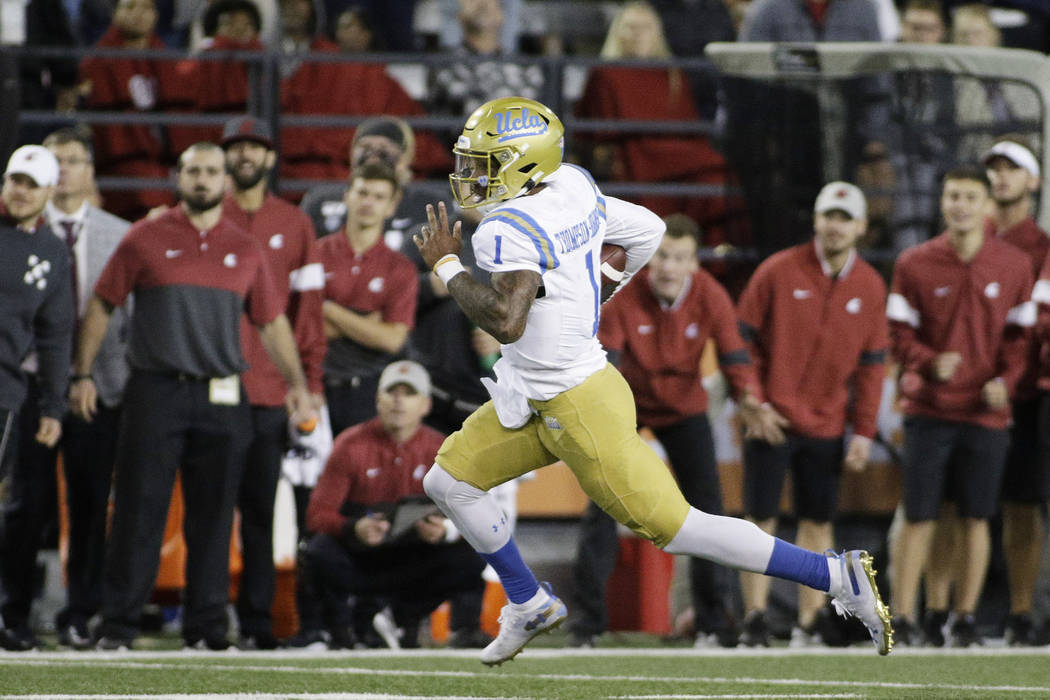 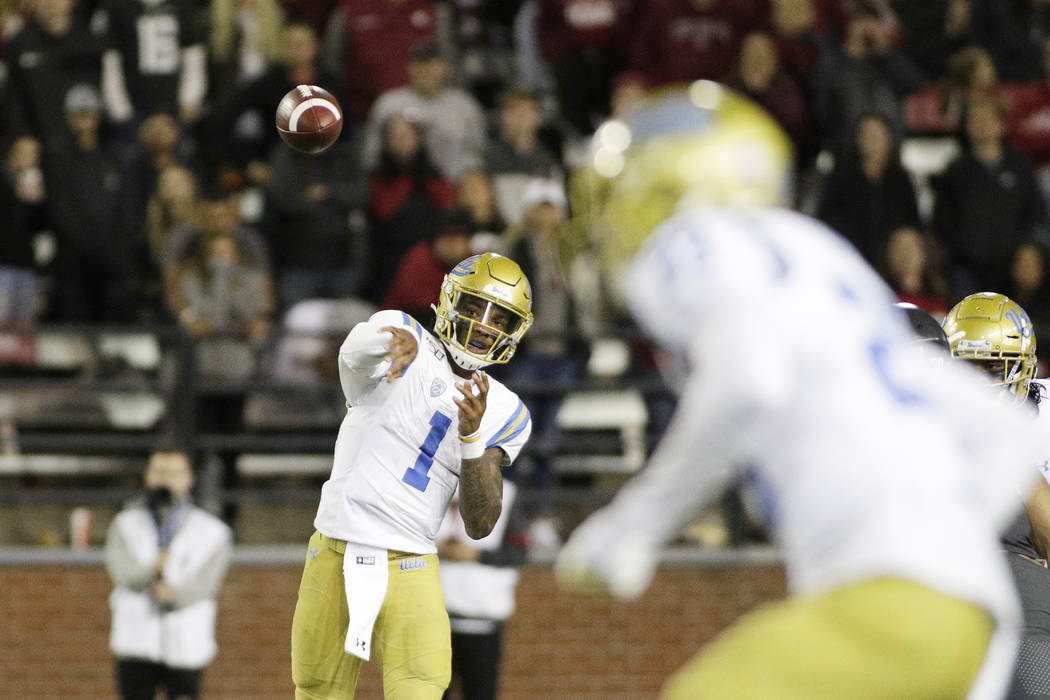 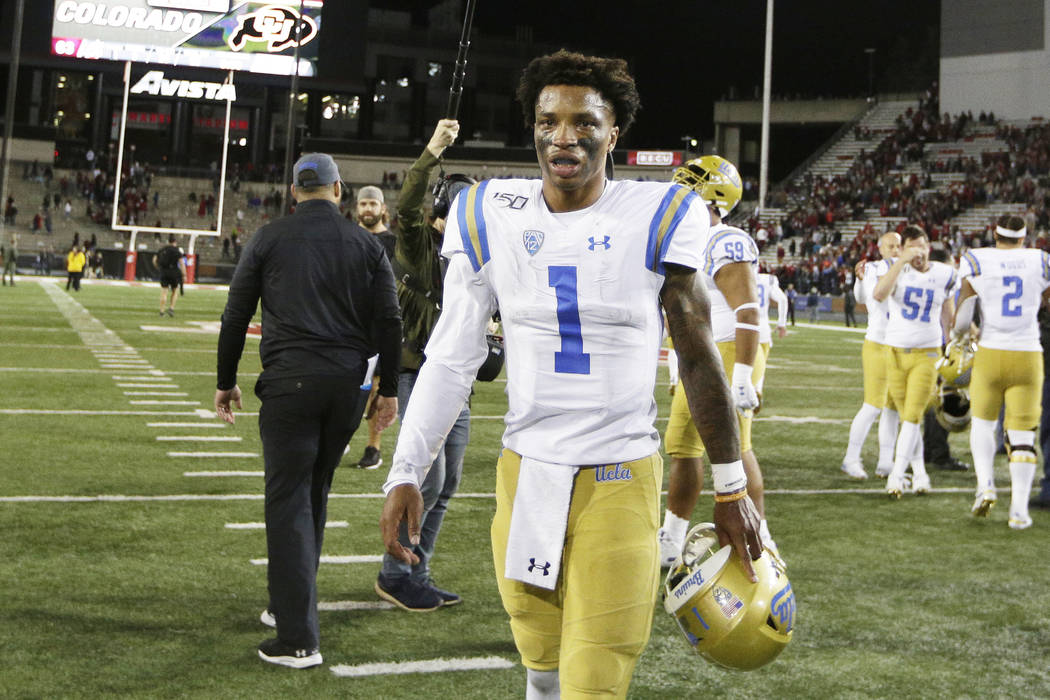 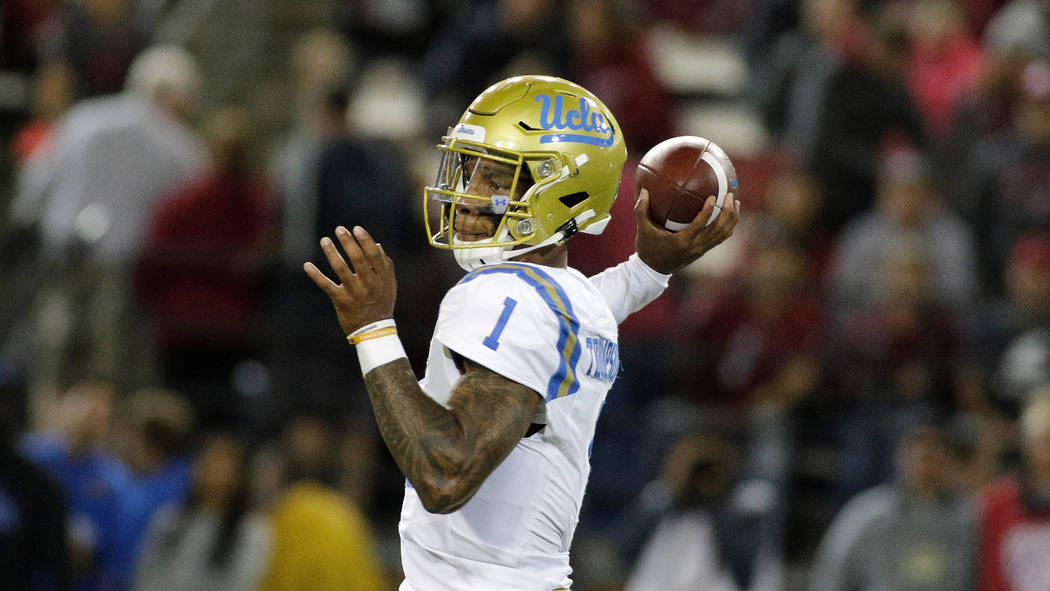 According to UCLA’s media guide, Dorian Thompson-Robinson stands 6 feet, 1 inch and weighs 197 pounds. He is somewhat modest in physical stature, even for a college football dual-threat quarterback.

But on Wednesday morning, the Bishop Gorman product still was feeling like a big man on the Westwood campus after leading UCLA back from 32 points down to a preposterous 67-63 victory at No. 19 Washington State on Saturday night.

“As much as I’ve been trying to ignore the noise, school is starting back up (Thursday),” Thompson-Robinson said via telephone sounding much more ebullient than in the postgame press conferences. “I’m getting a lot of hellos and ‘good job’ and stuff like that. It’s been fun these last couple of days, but now we’re on to the next game (at Arizona Saturday) and ready to roll.”

Not so fast, young man.

A 67-63 victory over a nationally ranked opponent during which one completes 25 of 38 passes for 507 yards and five touchdowns — including one of 94 yards — and runs for two more en route to national quarterback of the week honors is like the prices at Walmart: They’re worth rolling back on.

Thompson-Robinson said he couldn’t remember playing in a football game like that. Not even at Gorman, whose reputation largely is based on scoring bunches of points. UCLA delivered a downright passel at Wazzu, with 50 coming in a second-half explosion that made Pepcon ‘88 sound like a muted firecracker.

During his senior year at Gorman, when Thompson-Robinson switched from wide receiver to quarterback, the Gaels scored 58, 63, 56, 64, 59 and 51 points while allowing 0,0,0,0,0 and 6 — respect to Faith Lutheran for finding paydirt against the Gorman reserves in the state playoffs.

“In terms of having to come back, I’ve never been in a situation like that,” the sophomore said about digging the previously winless Bruins out of a 49-17 hole midway through the third quarter. “At Gorman, you had a lot of guys that could do it all, and you didn’t have to worry about making mistakes. If you fumbled, they could pick it up and go score (themselves).”

At UCLA when one fumbles, one has to pick it up himself.

One of the key plays in the Bruin blitzkrieg occurred when Thompson-Robinson was stripped on a scramble and somehow fell on the ball at the same time about six Cougars fell on him.

“After that, our other quarterback, Chase Griffin, came up and said ‘God’s got you.’ We kept scoring and scoring and things kept going our way,” Thompson-Robinson said.

The teams combined for 1,377 yards. It was a thrillfest that made UCLA alum Bill Walton see cosmic colors and WSU coach Mike Leach walk the plank of his pirate ship. There were even reports that Madden 20 video game owners were demanding refunds, because the scores were too low and not realistic.

“I think it just shows what we’re capable of and where we can go with this offense,” Thompson-Robinson said about UCLA being held to 14 points in losses to Cincinnati, San Diego State and No. 6 Oklahoma to start Chip Kelly’s second season as Bruins coach.

It also was a personal confidence-builder for Thompson-Robinson, who was thrown into the Pac-12 fire as a true freshman in 2018 and sometimes struggled so much that some in the media implored Kelly to try somebody else during a rebuilding 3-9 season.

One fantastic game and comeback does not establish a young quarterback still learning the position as a Heisman Trophy candidate. But the manner in which Thompson-Robinson led the Bruins back in one of the craziest games you’ll ever see seemed to justify his decision to switch jersey numbers before the 2019 season.

“Just talking to some of my guys on the team and stuff, and the number was available and all that, and …”

Dorian Thompson-Robinson, UCLA’s new big man on campus — now referred to as an acronym (DTR) by ESPN broadcasters — paused when considering his new position in the game program and in the hearts of Bruins’ fans.