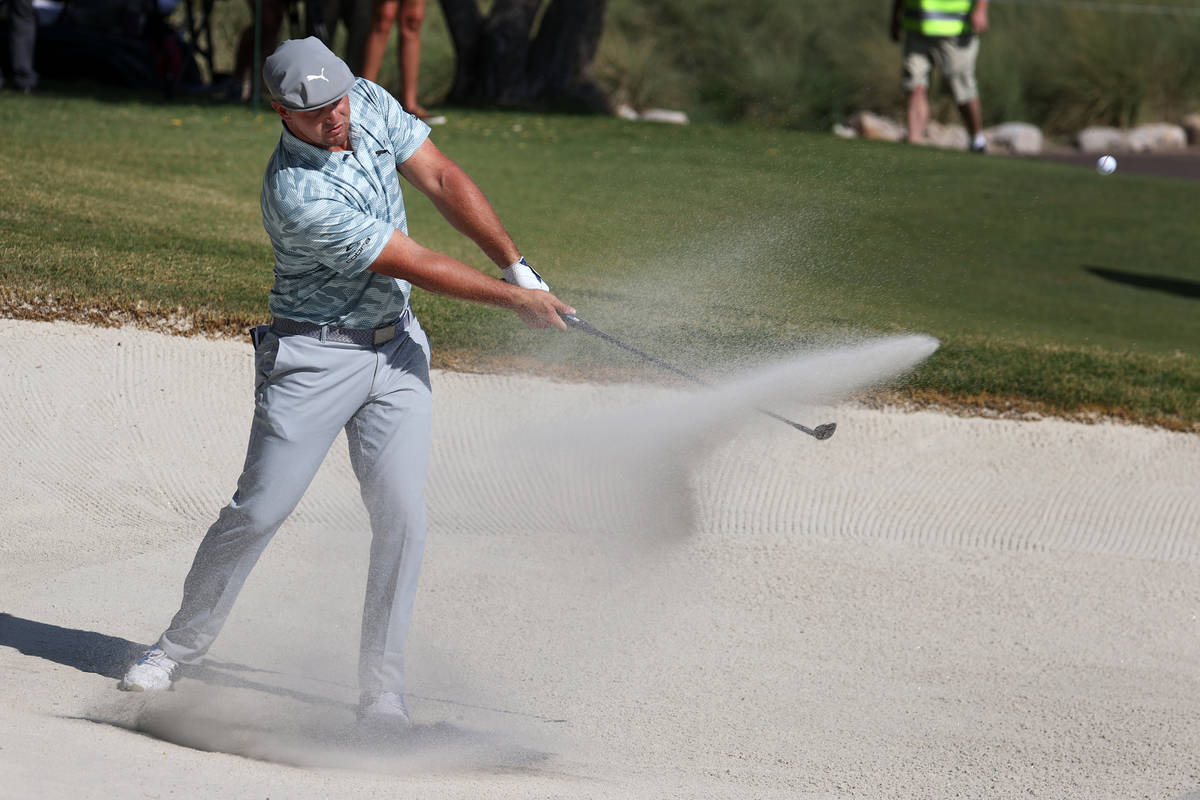 Bryson DeChambeau hits the ball from the bunker at the seventh hole during round three of the 2020 Shriners Hospitals for Children Open at TPC Summerlin in Las Vegas, Saturday, Oct. 10, 2020. (Erik Verduzco / Las Vegas Review-Journal) @Erik_Verduzco 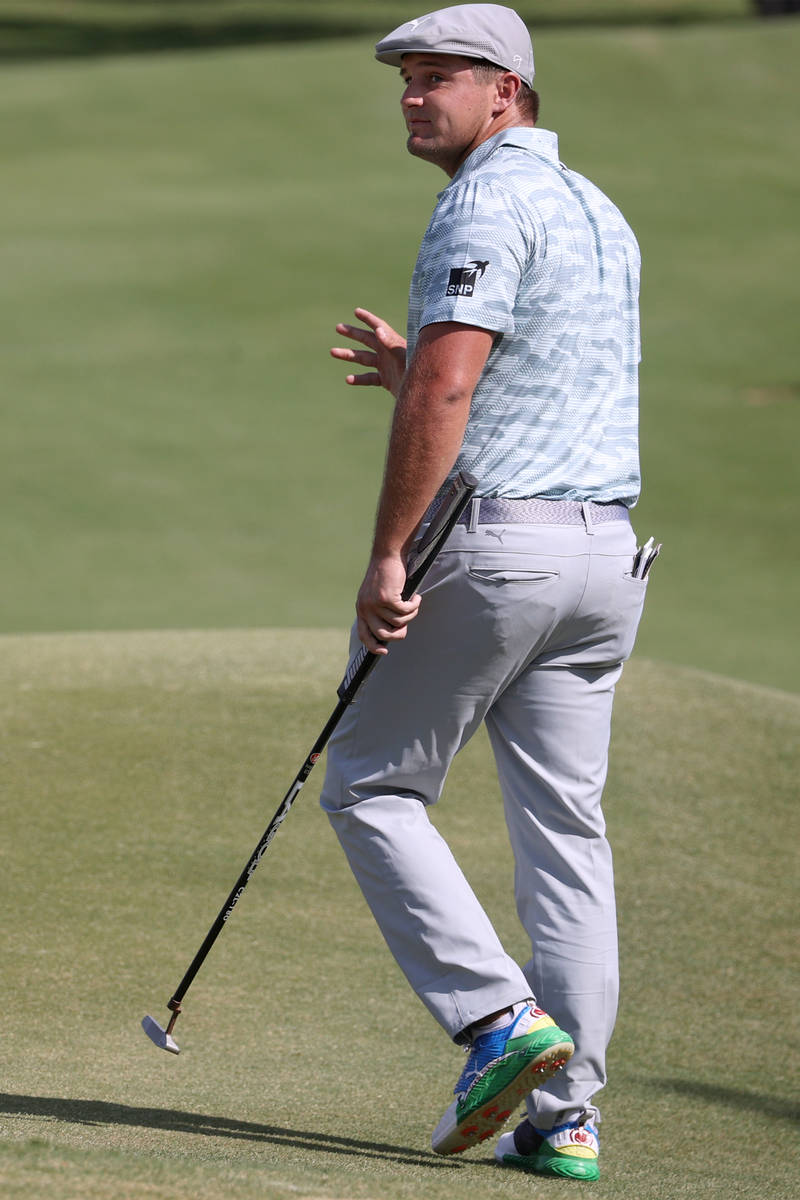 Bryson DeChambeau reacts after hitting an eagle at the third hole during round three of the 2020 Shriners Hospitals for Children Open at TPC Summerlin in Las Vegas, Saturday, Oct. 10, 2020. (Erik Verduzco / Las Vegas Review-Journal) @Erik_Verduzco 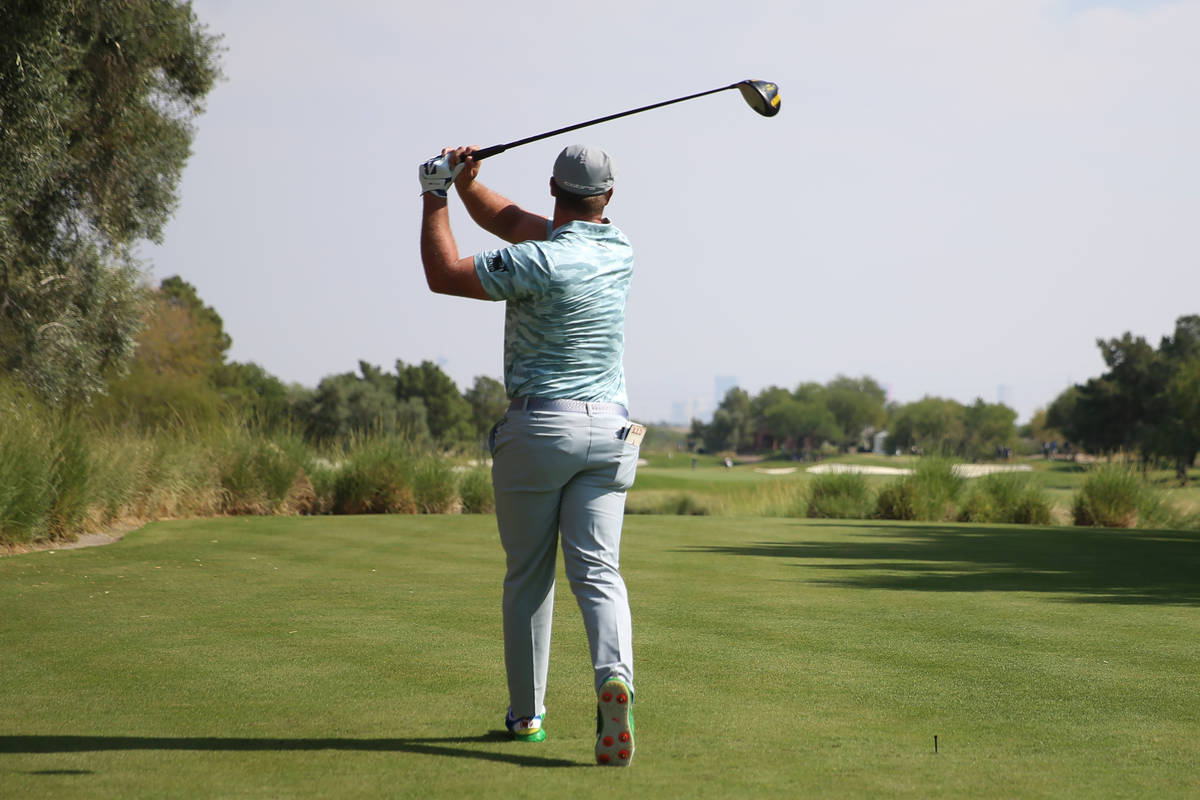 Bryson DeChambeau tees off at the fourth hole during round three of the 2020 Shriners Hospitals for Children Open at TPC Summerlin in Las Vegas, Saturday, Oct. 10, 2020. (Erik Verduzco / Las Vegas Review-Journal) @Erik_Verduzco 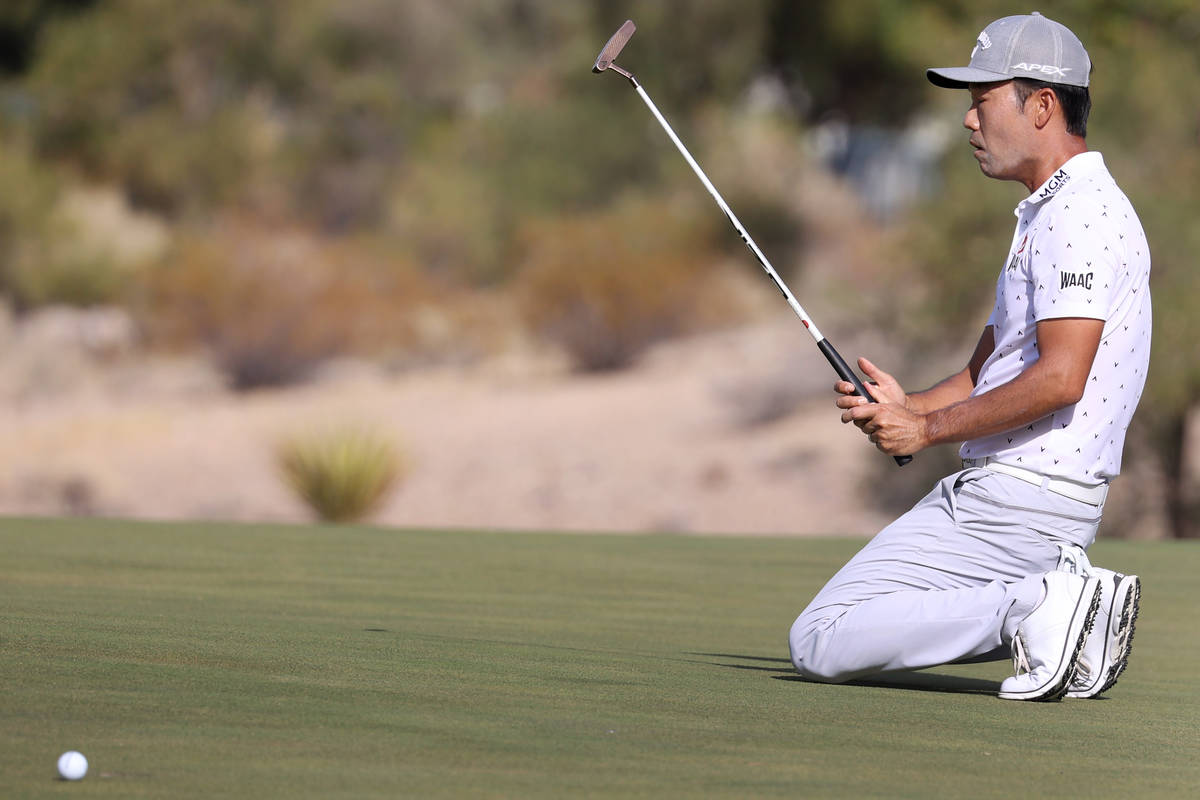 Kevin Na reacts after missing a putt for an eagle at the 15th hole during round three of the 2020 Shriners Hospitals for Children Open at TPC Summerlin in Las Vegas, Saturday, Oct. 10, 2020. (Erik Verduzco / Las Vegas Review-Journal) @Erik_Verduzco

Remember when the biggest complaint about Bryson DeChambeau was that he played golf too slowly?

“He’s trying to make Thanksgiving dinner when all he needs is a PB&J,” a court marshal at the Tour Championship said after watching the 2018 Shriners Hospitals for Children Open champ deliberate over an approach shot.

That was so last year.

DeChambeau had roughly 40 pounds less muscle then. He could only hit a golf ball as far as the moon.

Now he’s lying two on Mars. Or at least he was, until struggling to a par 71 on a breezy Saturday afternoon and tumbling into a tie for 31st place after three rounds at TPC Summerlin.

DeChambeau plays golf the way George Foreman used to fight. He doesn’t so much win tournaments as make them cry “uncle” before knocking them out.

“It doesn’t matter if I play my best, he’s going to be 50 yards in front of me off the tee,” said Matthew Fitzpatrick after taking a share of the lead at the BMW Championship in England on Friday.

Fitzpatrick stands 5 feet 5 inches and weighs 155 pounds. He said the 6-1, 240-pound DeChambeau is making a mockery of golf.

“The only thing (in which) I can compete with him is putting, and that’s just ridiculous,” Fitzpatrick said.

DeChambeau won the U.S. Open by six strokes before swinging for the fences and shooting 62 to take the first-round lead at the Shriners and draw even more attention to his bulging biceps.

“It’s a compliment to me, honestly,” DeChambeau said of Fitzpatrick’s rebuke. “A year ago, I wasn’t hitting it anywhere near as far as I am today. It took a lot of work, a lot of hours to figure out a lot of this stuff.”

There’s social distance in golf these days, and then there’s just plain ol’ distance, for which DeChambeau, who has a physics degree from Southern Methodist and projects an image of mad scientist rather than Incredible Hulk, is writing new algorithms.

“I think he’s looking out for a certain set of players, and I appreciate that,” DeChambeau said of Fitzpatrick, adding that it’s not easy to drive a ball 360 yards and consistently find the fairway. Such as Saturday, when he averaged 382 yards on his drives but hit only nine fairways.

“If anything, it’s more difficult the way I’m doing it with the rules today,” DeChambeau said. “It’s more built for players like Matthew Fitzpatrick and his distances.”

On Saturday, it was built for Matthew Wolff, who shot a 61 that easily could have been a 59.

Nobody on the other side of the pond complained about him having an unfair advantage.

Nobody likes to hear the alarm go off at the crack of dawn, unless one is playing in the first group at the Shriners Open before the breeze comes up.

“Being first up on Saturday gives you an opportunity. Greens were perfect. No wind to speak of,” Brandt Snedeker said after shooting 8-under 63 to gain 42 positions and remain with striking distance of the lead.

A nine-time winner on the PGA Tour, the 39-year-old said he liked his final-round chances despite being five shots back for one obvious reason.

“I’m going to be teeing off early again,” he said.

■ Will Zalatoris, who shot his second consecutive 64 to pull within three shots of the lead, recently wrote a check to his caddie for the winner’s share of the purse after taking the third-round lead of a Korn Ferry Tour event in Colorado. While I’m not aware of any plans he might have to relocate to Las Vegas, it can be assumed casino types would welcome his confidence during the ongoing recession.

■ Kevin Na remained in contention to join Jim Furyk as the only back-to-back Shriners Open winners with a quiet 64, as strange as it sounds to refer to a 64 in that way. “Made a lot of good shots, made some putts,” said the Las Vegas resident, who is three strokes off the lead, as he came off the course. Yup, pretty quiet.

■ The lack of energy without spectators and only a few fezzes on the course was more palpable Saturday afternoon. A vow was made in the media center that if the coronavirus is ever brought under control and spectators are allowed back, none among the three of us would complain the next time one fan got drunk and yelled “Get in the hole” from a hospitality tent.

My shuttle ride en route to @ShrinersOpen. It was me, the driver and a young woman who apparently left her car at a bar or coffee joint across the street. Welcome to the Twilight Zone Open. pic.twitter.com/t8GgiUju2L