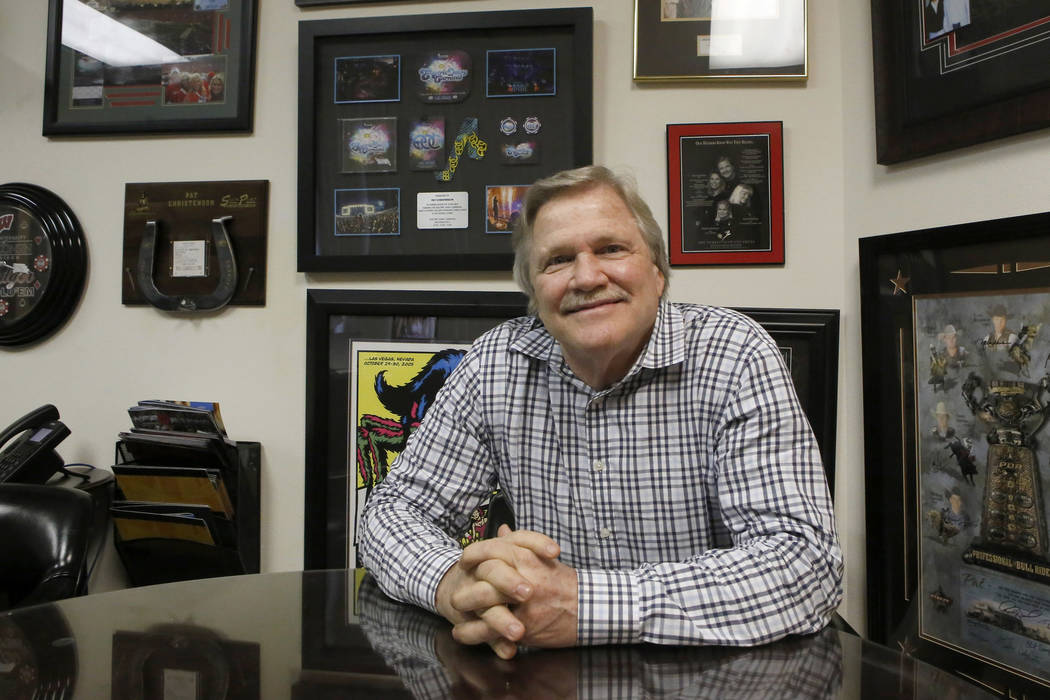 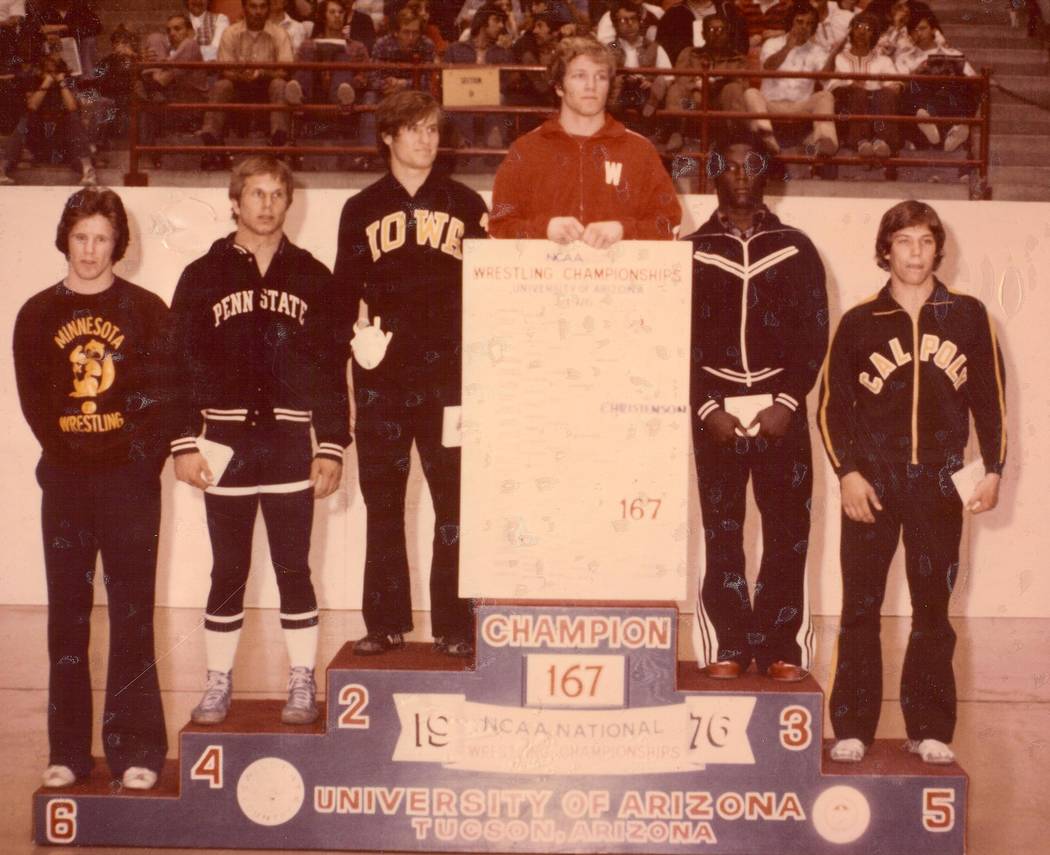 Pat Christenson holds the bracket after winning the 1976 NCAA wrestling 167-pound championship in Tucson, Arizona. The longtime president of Las Vegas Events was inducted into the University of Wisconsin Athletic Hall of Fame on Friday night. (Courtesy: Pat Christenson) 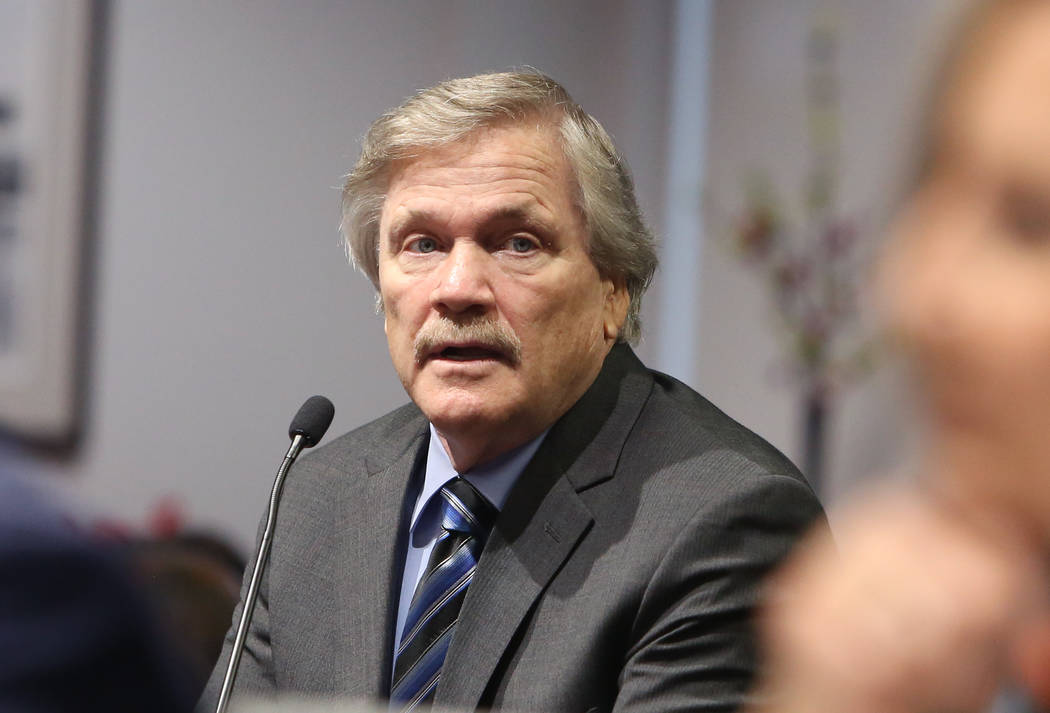 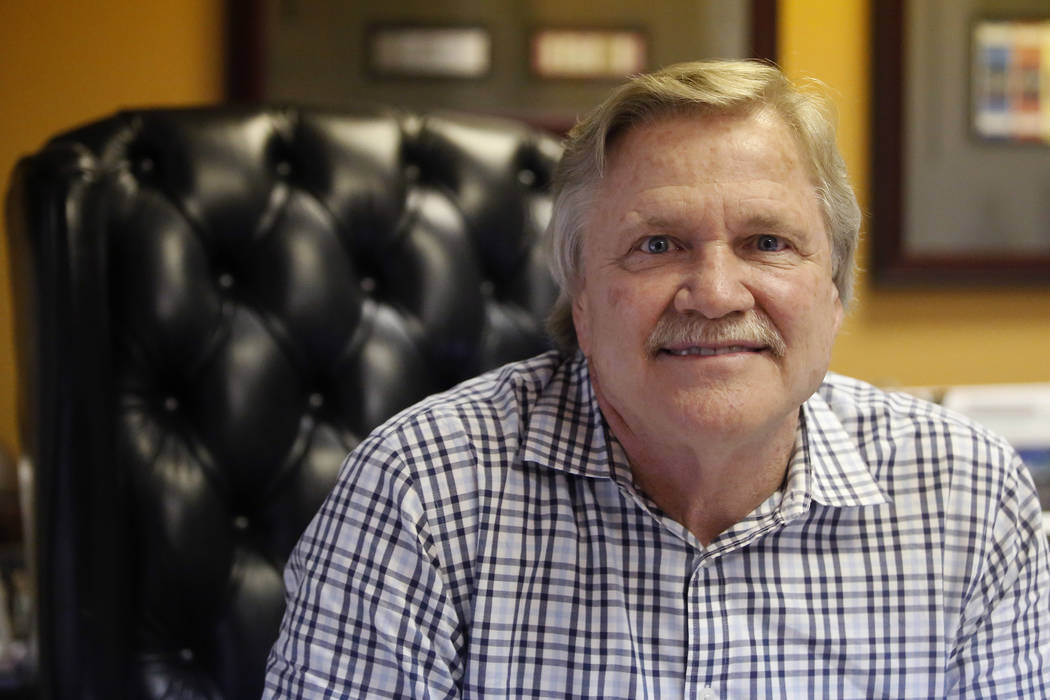 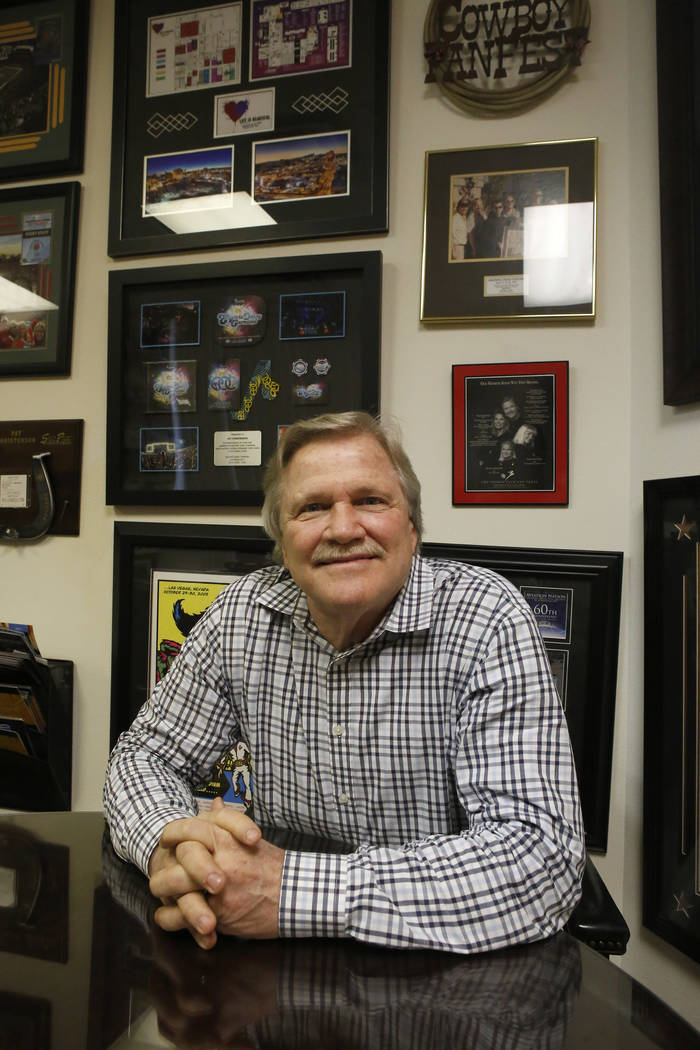 He says he weighs only 28 pounds more than he did in 1976 when he won the 167-pound NCAA wrestling championship for Wisconsin. But looking back, that’s probably not the most remarkable aspect of Pat Christenson’s crowning achievement on the mat.

He won the NCAA title despite being unseeded.

“Dan Gable got locked in an elevator, and he was the guy who was representing us (Big Ten wrestlers) for our seeds,” Christenson, the longtime Las Vegas Events president, recalled before being inducted into the University of Wisconsin Athletic Hall of Fame during a banquet in Madison.

He was one of 12 honorees recognized at Wisconsin’s football game against Central Michigan on Saturday.

Christenson got even with Gable, the former Iowa State stalwart and then coach at Iowa by storming through the bracket and defeating the Hawkeyes’ Dan Wagemann in the championship match at the University of Arizona.

One of three Badgers to win national titles in that meet, Christenson made the Wisconsin team as a walk-on after his high school career in Oak Creek, Wisconsin, a Milwaukee suburb. He said he owes not only the Hall of Fame honor to the 1976 national championship meet but also his long career in Las Vegas sports and entertainment.

“My education was important, but (overcoming) adversity, discipline and all of those fundamentals (learned through wrestling) were key to what I do today,” he said.

Having a visitor from Las Vegas in the large crowd at McKale Center also proved fortuitous.

“Probably the reason I am where I am today is that Dennis Finfrock was at that match,” Christenson said of the former coach of UNLV’s short-lived wrestling program who preceded him as director of Sam Boyd Stadium and the Thomas & Mack Center.

“He saw me win the title and pursued me the next three years to come out and be his assistant coach. I finally did it and, you know, the rest is history.”

He didn't know it at the time, but when Pat Christenson walked onto the Wisconsin wrestling team he found his path in life

We're excited to welcome Christenson to the #UWHallofFame in 2019!https://t.co/f3nK7BAvh2

Congratulations to Pat Christenson on his induction into the UW Athletic Hall of Fame. He is the 14th wrestler inducted! 👍 pic.twitter.com/u8fja6rrWF

Old ballplayers never die, at least not before attempting one last comeback. Or two.

It has been 69 years since Cameron Mitchell — you may know him better as Buck Canyon on the old TV series “The High Chaparral” — pitched in his only game for the Las Vegas Wranglers of the Class C Sunset League.

He lasted only two-thirds of an inning for Las Vegas, allowing 11 runs on six hits and three walks while striking out one in an 18-10 defeat to the Ontario (California) Orioles.

Wrote baseball historian Bob Lemke: “The actor had been slated to make another start, in Reno, but the Wranglers’ general manager said, ‘We have decided against it.’ ”

Remembering actor CAMERON MITCHELL (1918 – 1994), who was born on November 4th. He is best remembered for starring as Uncle Buck in the 1960s NBC western series, The High Chaparral. pic.twitter.com/ThPTslklWd

— It was a rough week for former Las Vegas 51s managers employed in similar capacities in New York.

After Wally Backman of the independent Long Island Ducks was arrested following a domestic dispute with a woman claiming to be his girlfriend, Tony DeFrancesco watched his Syracuse Mets blow a 13-6 eighth-inning lead against Scranton/Wilkes-Barre en route to a 14-13 loss in a one-game playoff for the International League’s Northern Division title.

The Syracuse Mets blew a 13-6 lead in the 8th against the @swbrailriders pic.twitter.com/911LQB6Nvl

— Chace Numata, the Detroit Tigers’ catching prospect who died in an electric skateboard accident Aug. 30, had a brother who played baseball at College of Southern Nevada. Chevas Numata batted .333 and was 3-0 as a pitcher for the 2013 Coyotes.

love you all @CSN_Baseball this means so much! thank you all for everything you did for my brother and I #1Pack #ForNumi

— The official name of Sunday’s NASCAR race at Indianapolis Motor Speedway that will set the field for next week’s South Point 400 playoff opener in Las Vegas is the Big Machine Vodka 400 at the Brickyard Powered by Florida Georgia Line.

Sort of rolls off the tongue, provided you have a tongue like a giraffe.

Imagine next year leading up to the Brickyard Race during 4th of July weekend.

"Hey Honey, would you rather go to the Big Machine Vodka 400 at the Brickyard Powered by Florida Georgia Line or hang out with Friends and Family?"

Brent Musburger was looking, live, at something Saturday morning and took to Twitter to describe it:

“I’m just flying into Oakland for the Monday nighter and some dude in a hot air balloon is headed in the opposite direction. Can’t imagine who that might be,” he wrote after the Raiders released Antonio Brown.

I’m just flying into Oakland for the Monday Nighter and some dude in a hot air ballon is headed in the opposite direction. Can’t imagine who that might be.