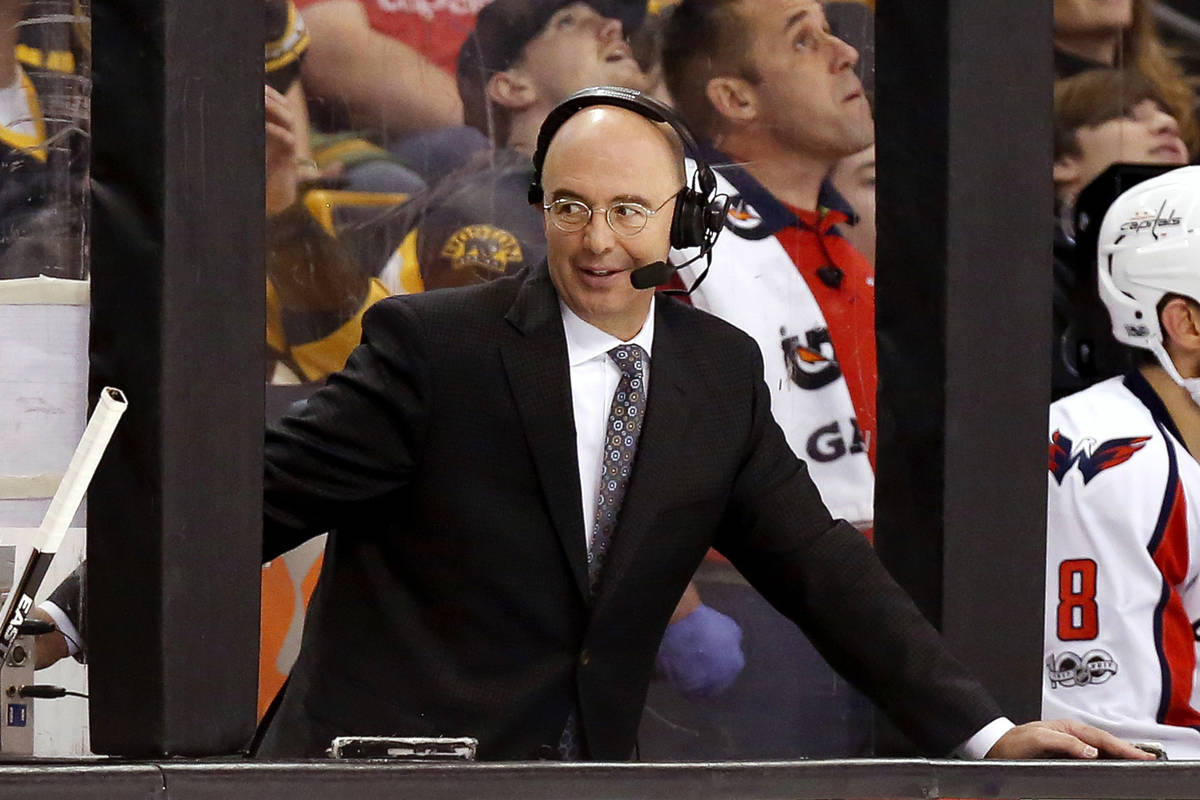 FILE- In this April 8, 2017, file photo, Pierre McGuire broadcasts from between the benches during the third period of an NHL hockey game between the Boston Bruins and the Washington Capitals in Boston. Women’s hockey star Kendall Coyne Schofield says she doesn’t believe NBC Sports analyst Pierre McGuire questioned her knowledge of the sport during an awkward pre-game interaction. McGuire was criticized on social media for telling Coyne Schofield which sides the Penguins and Lightning were on during their broadcast of the game on NBC Sports Network on Wednesday night and for saying the network was paying her to be an analyst and not a fan. (AP Photo/Winslow Townson, FIie) 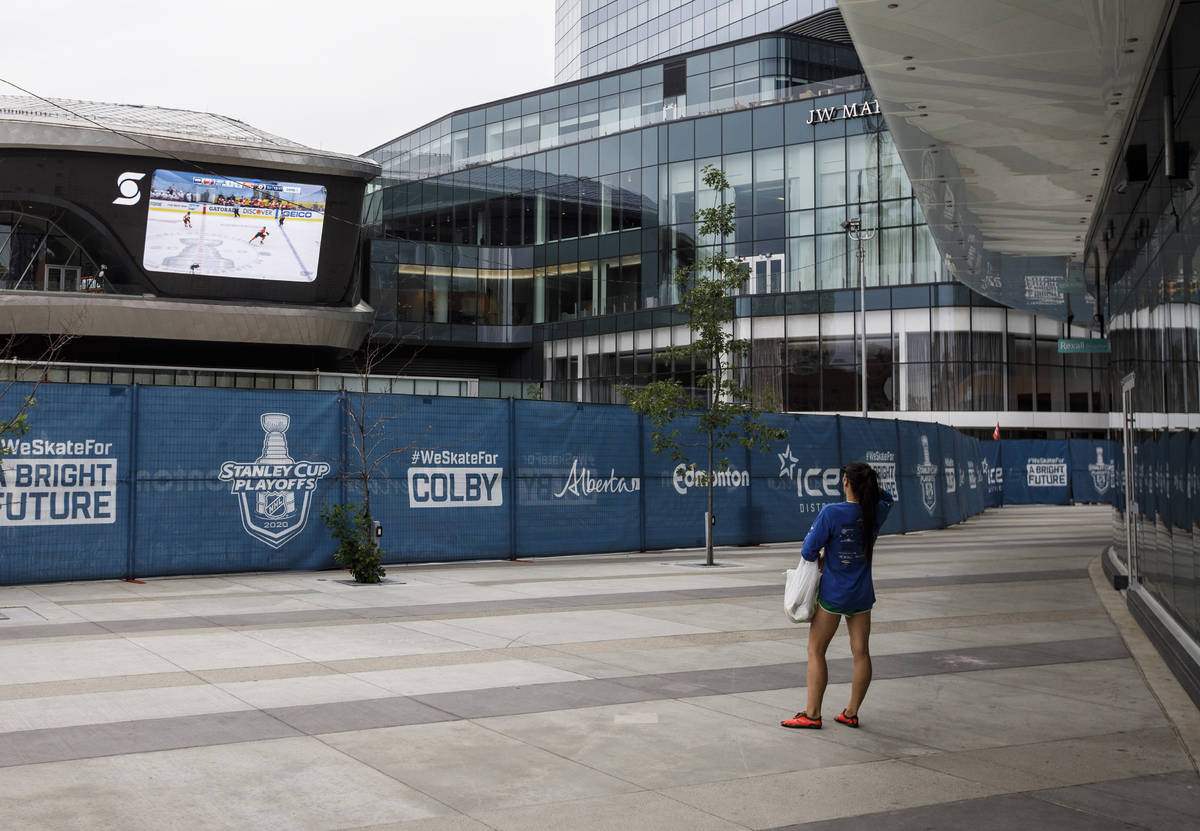 FILE - A woman watches a hockey game on the big screen just outside the bubble at the NHL Western Conference Stanley Cup hockey playoffs in Edmonton, Alberta, on Monday, Aug. 24, 2020. (Jason Franson/The Canadian Press via AP)

There might be no getting away from the coronavirus. But being stationed inside the glass inside a bubble in Edmonton, Alberta, for the NHL playoffs might be the closest thing to sanctuary.

“I wanted to see if we could even get past the first week without a huge COVID infection rate,” said Pierre McGuire, NBC’s “Inside the Glass” reporter.

“What people have done here, what the NHL has accomplished, is beyond anyone’s expectation. I’m blown away by the professionalism of the players; I’m blown away by the health care workers who have been testing us every single day. I can tell you the people who work in the hotels and the restaurants here, who have to go through the COVID tests like us, they’ve been phenomenal, too.”

During a cellphone chat on the Friday off day of the Golden Knights-Dallas Stars Western Conference Final series, McGuire spoke about what it’s like to be inside the glass for the most unusual playoffs in NHL history, as well as his ties to Las Vegas’ brief history as a hockey town.

— On Radek Bonk, who starred for the International Hockey League’s Las Vegas Thunder as a teenager while McGuire was coaching the Hartford Whalers and played for Ottawa when he became a Senators scout: “The biggest thing I can tell you is he was a physical freak at that age. Radek was maybe a half-gear slow, and that’s the only thing that stopped him from being a real superstar in the league.”

— On Bob Strumm, the Thunder’s former general manager who signed Bonk, was instrumental in indoctrinating Las Vegas to pro hockey and still lives in the valley: “I used to go across the (Canadian) prairie with Strummer — Saskatchewan, Alberta and Manitoba. Strummer is a really good man and a hockey lifer.”

— On inviting Kurt Busch inside the glass for a Knights-Bruins game and having the NASCAR driver from Las Vegas practically steal his microphone: “We had so much fun in the booth in Las Vegas. (Laughing) He was great, and I look forward to doing that again with him sometime.”

As for the Knights-Stars series, he said what’s not to like?

Kurt Busch will appear inside the glass with Pierre McGuire during the second period of NBCSN’s Bruins-Golden Knights broadcast https://t.co/jYRrbYxO22 pic.twitter.com/srBT9Szvoj

— If the name Dampy Brar meant anything before Tuesday, when the resident of Calgary, Alberta, was named winner of the NHL’s Willie O’Ree Community Hero Award, then you just might be the biggest Las Vegas Thunder fan who walked the planet.

Brar played in eight games and scored one goal for the local IHL franchise during its final season in Las Vegas in 1998-99 when former New York Islanders star Bob Bourne was coach.

— Former Desert Pines High tight end Darnell Washington was one of Georgia’s big recruits and, according to a report in the Atlanta Journal-Constitution, has become an even bigger recruit during training camp.

“Darnell has been working his way into shape,” Bulldogs coach Kirby Smart said. “At one time, he was at 273 (pounds). We felt like he needed to get down to about 263 to be effective. He’s a big man.”

Washington, who stands 6 feet 7 inches tall, generally was listed at 260 pounds as a five-star recruit for the Jaguars.

Incoming freshman TE:
Darnell Washington, Georgia
6-7/260
• 5⭐️ Athlete
• Monstrous size with stunning athleticism for his frame.
• Will need to develop as a blocker, likely does so with McKitty taking the lead in '20, but Washington could become a star in '21. pic.twitter.com/Kc8mrlzRxx

— In addition to leading UNR to its first two NCAA men’s basketball tournament berths, Sonny Allen, who was 84 when he died Friday in Reno after suffering from Parkinson’s disease, also guided the Las Vegas Silver Streaks of the short-lived World Basketball League to the championship during the league’s debut season in 1988.

The WBL was a pro league for players 6 feet 5 inches and under (and perhaps a few 6-6 guys who were measured in their stocking feet). Former NBA legend Bob Cousy was one of the league’s founders.

Former UNLV standouts Freddie Banks, Anthony Jones and Mark Wade played for the Silver Streaks, but Jamie Waller of little Virginia Union was the star of Allen’s Las Vegas title team that defeated the Chicago Express in a one-game playoff.

Sonny Allen, a humble man who won a national title and build the foundation for @ODUMensHoops success, passed away this morning. He was also a social warrior — he integrated Virginia college basketball. @ODUSports @ODU @ODUAlumni @HerdMBB @SMU @ODUSEES https://t.co/OPbj3oZaUi

RIP coach Sonny Allen. Our relationship started in 1982 when Coach was recruiting me. A true friend and mentor, I learned so much from him. Sonny played a huge role in “coaching the coaches” and self scouting our Nevada teams. “The Fastbreak Coach" leaves a basketball legacy pic.twitter.com/0nMk5eQfEm

Rodger Sherman of The Ringer, on the Labor Day football game pitting Brigham Young against Navy:

“BYU and Navy are playing tonight, a matchup which has to be top 5 on the list of college football games least likely to be canceled due to campus party-related COVID spread.”

BYU and Navy are playing tonight, a matchup which has to be top 5 on the list of “college football games least likely to be canceled due to campus party-related COVID spread”