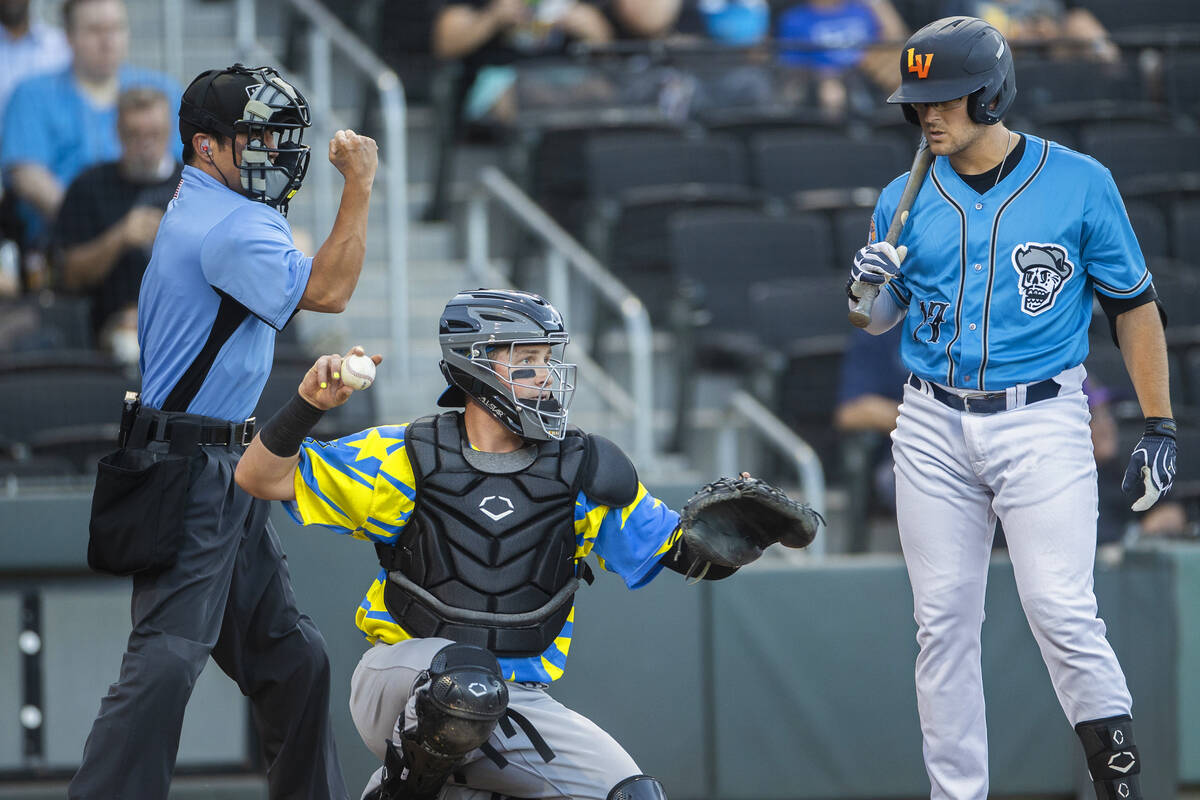 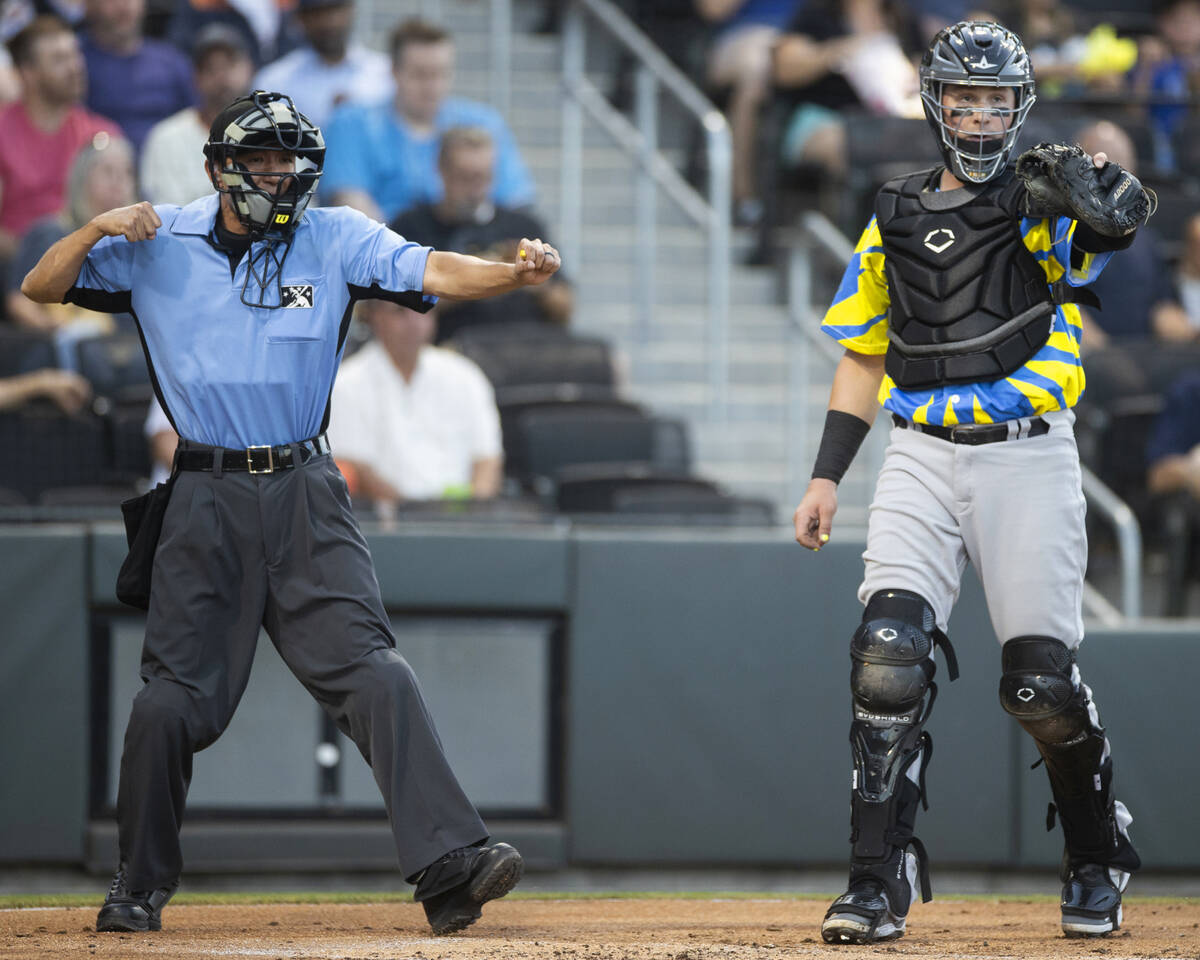 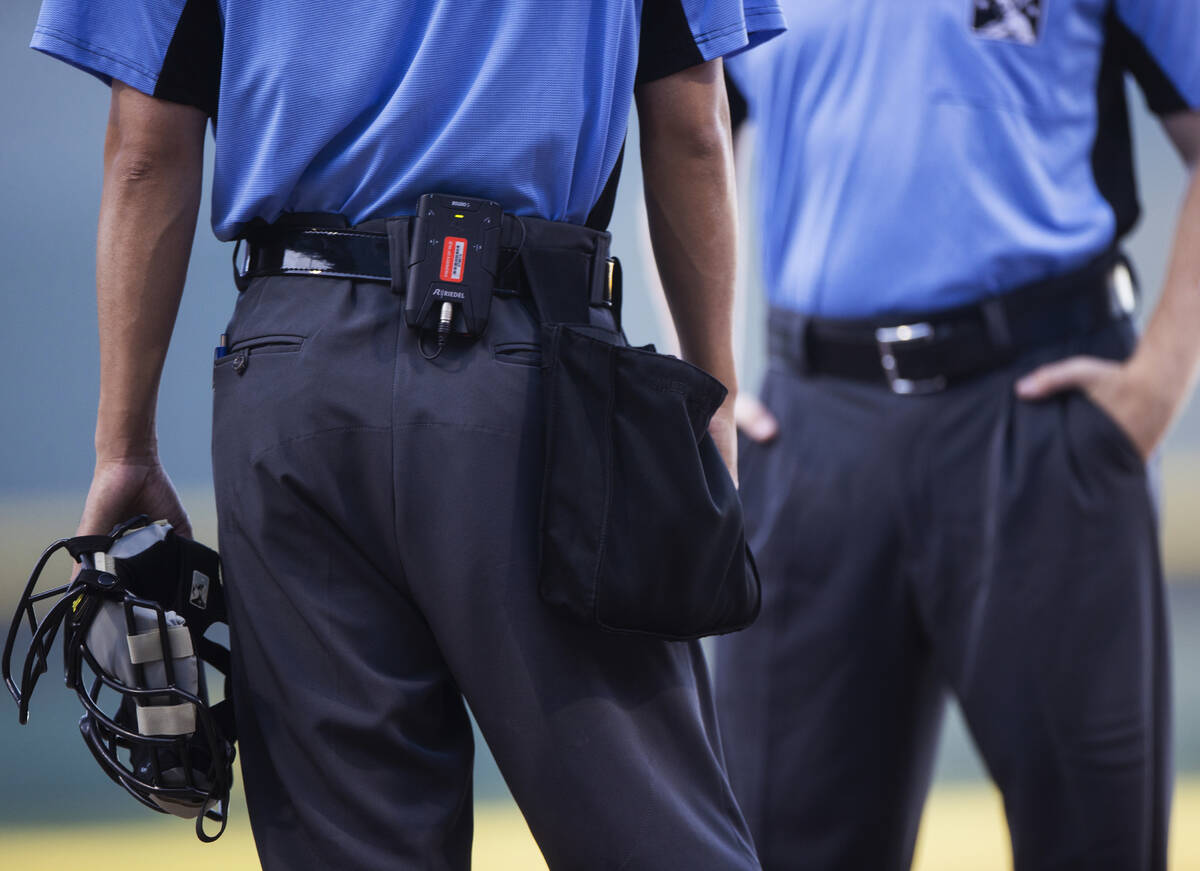 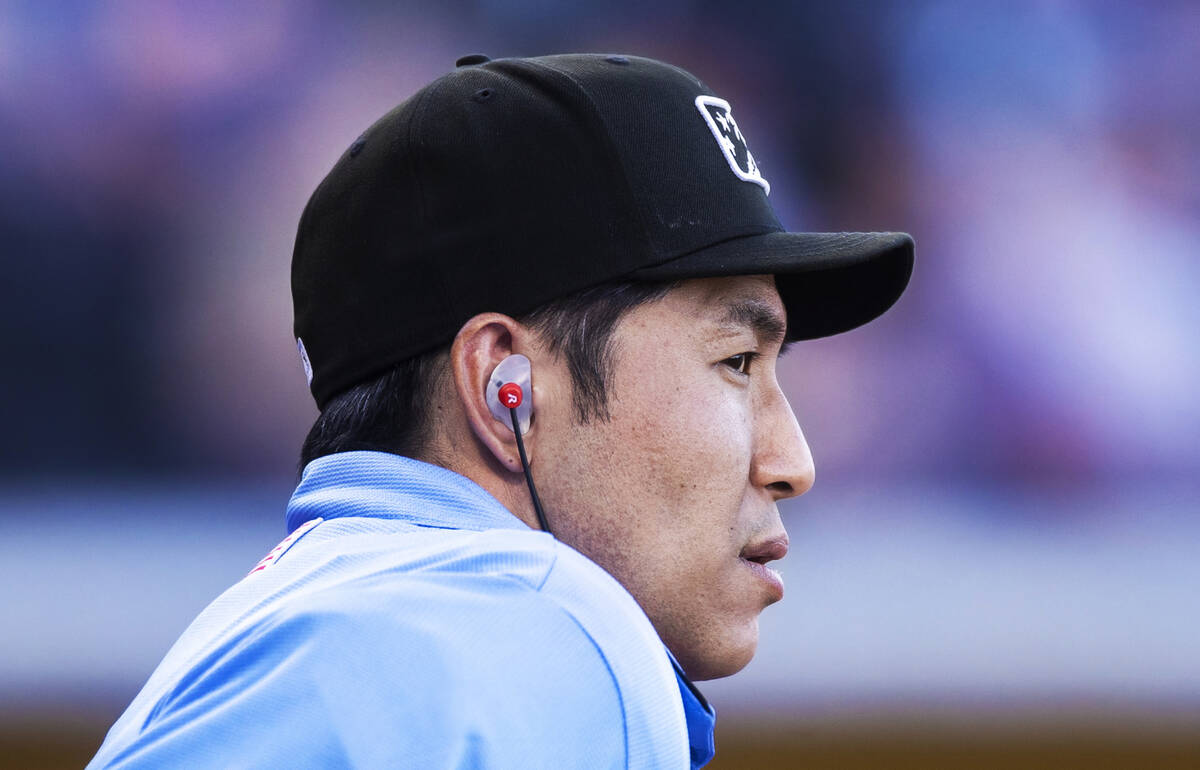 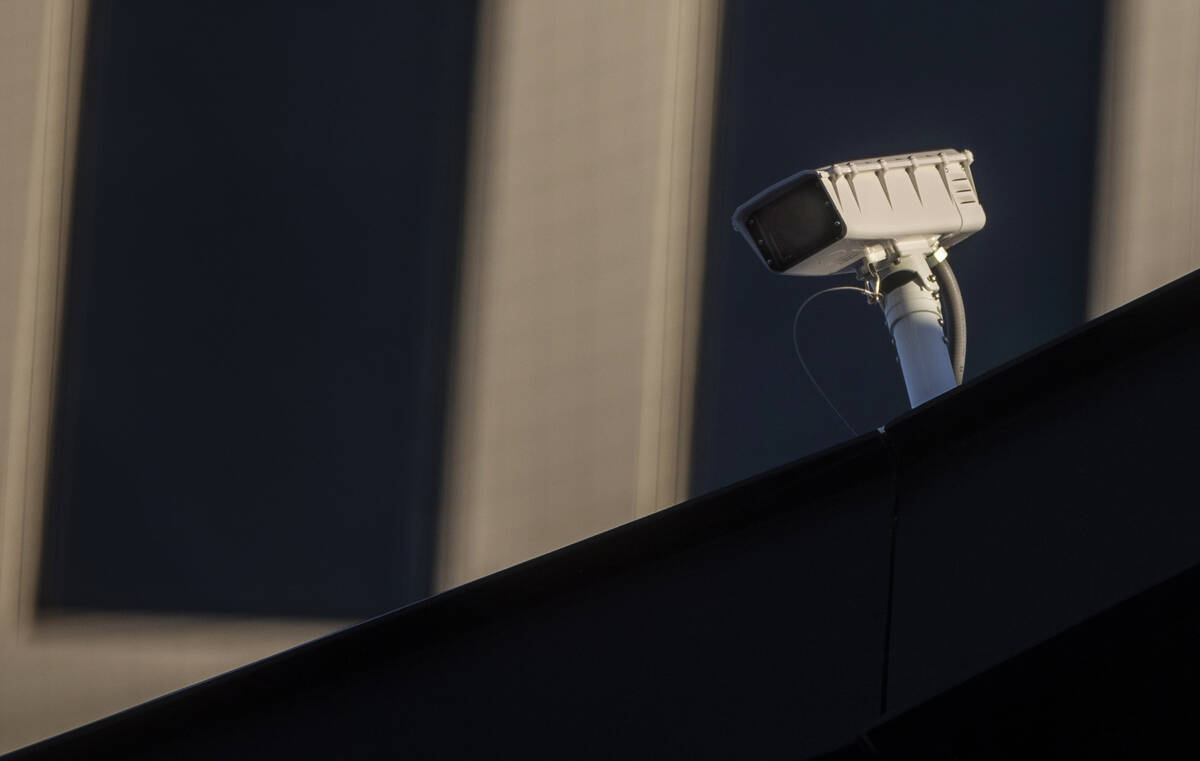 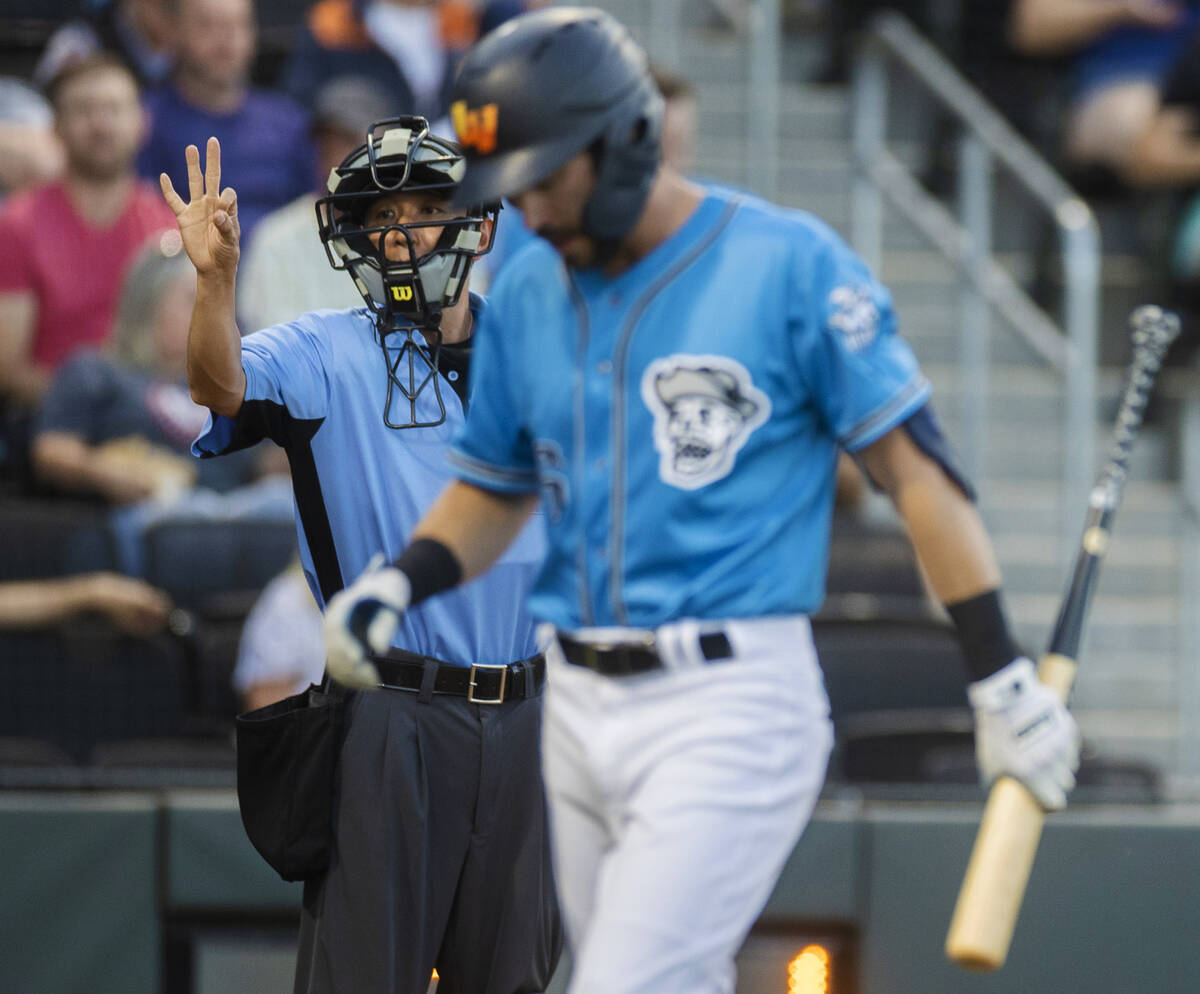 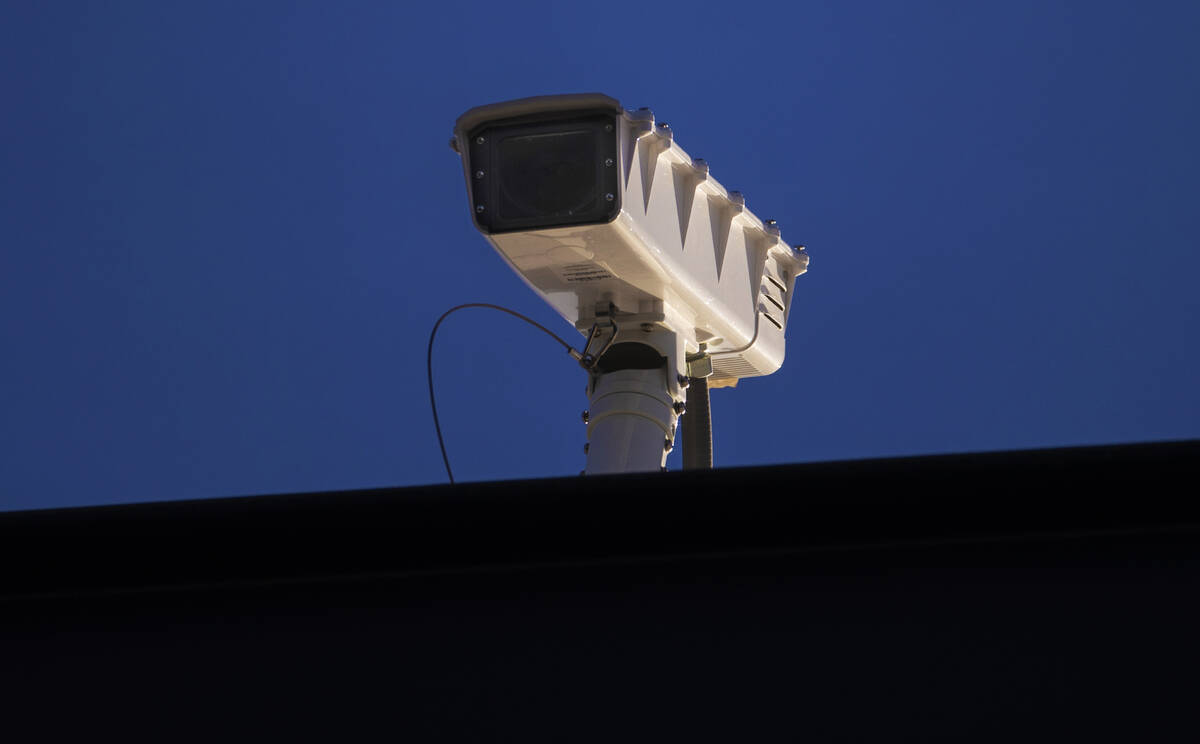 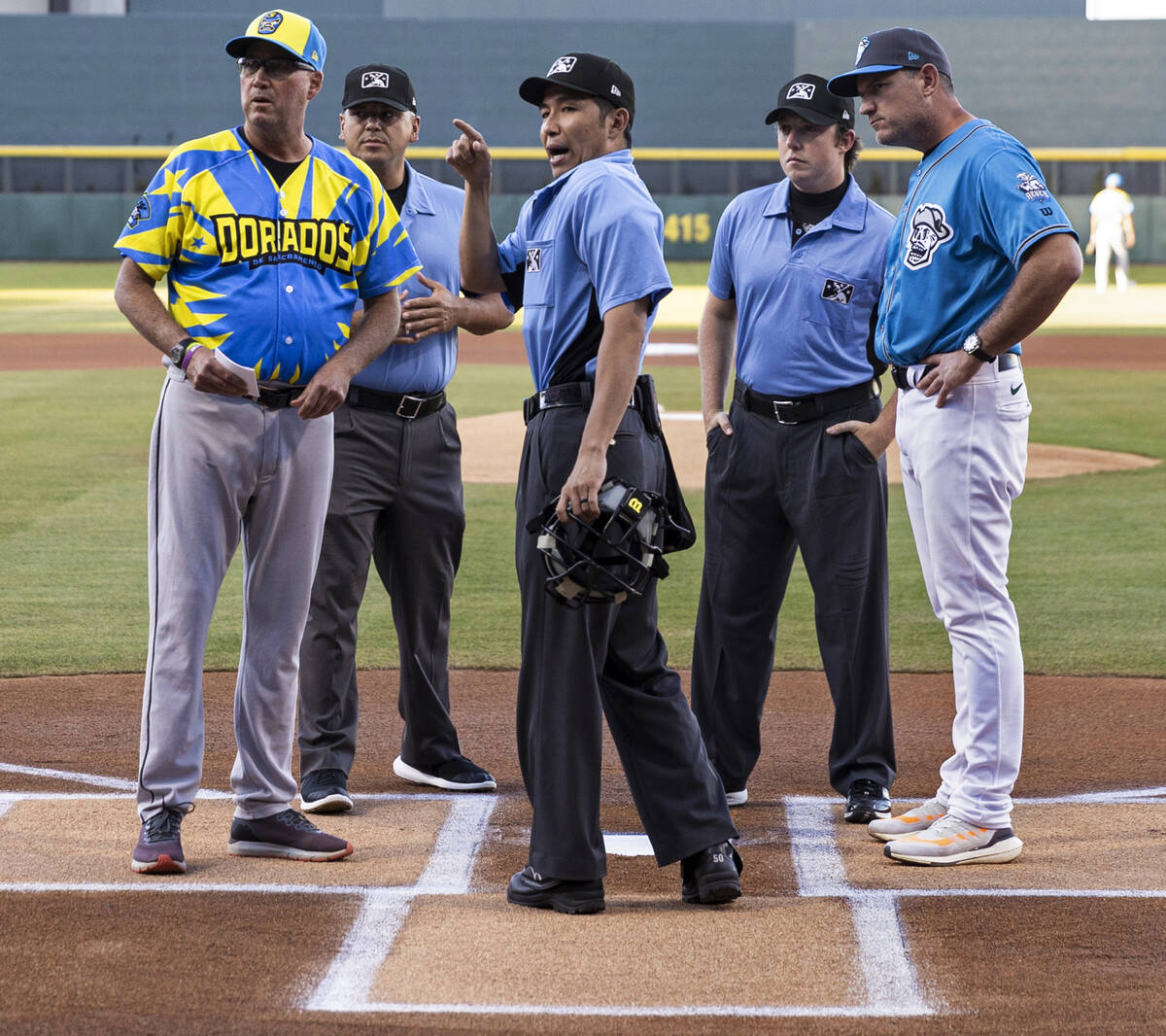 Home plate umpire Takahito Matsuda, middle, meets with both teams and fellow umpires before the start of a minor league baseball game where the Automated Ball-Strike system was used between the Aviators and the Sacramento River Cats at Las Vegas Ballpark on Tuesday, May 31, 2022, in Las Vegas. (Benjamin Hager/Las Vegas Review-Journal) @benjaminhphoto 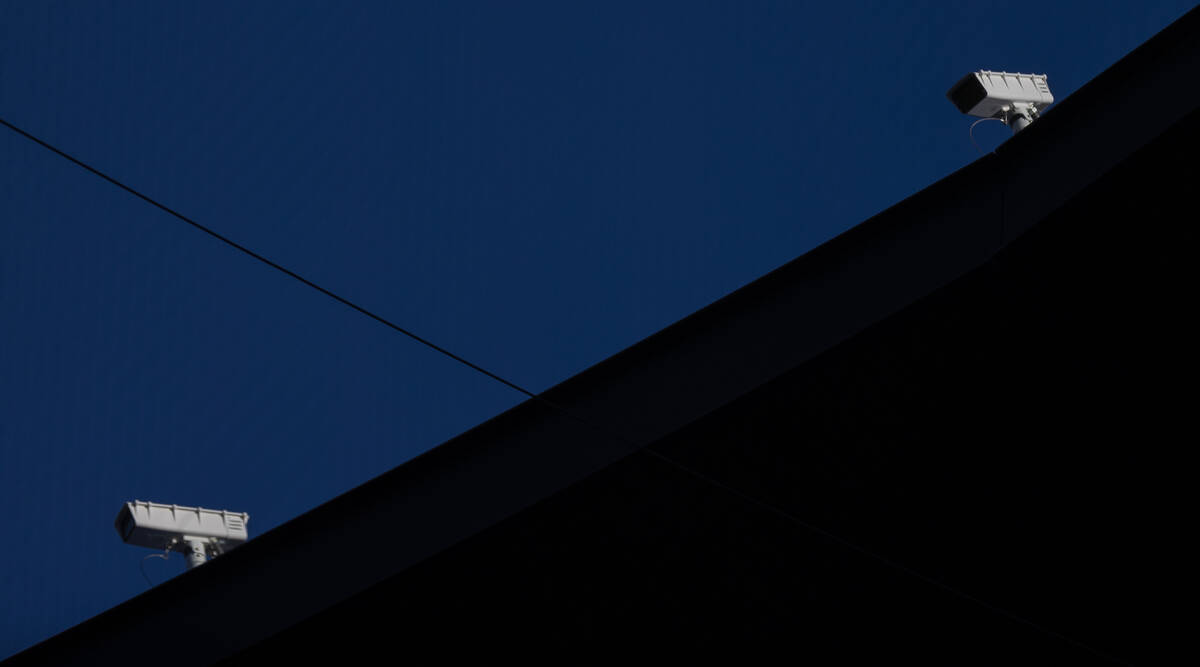 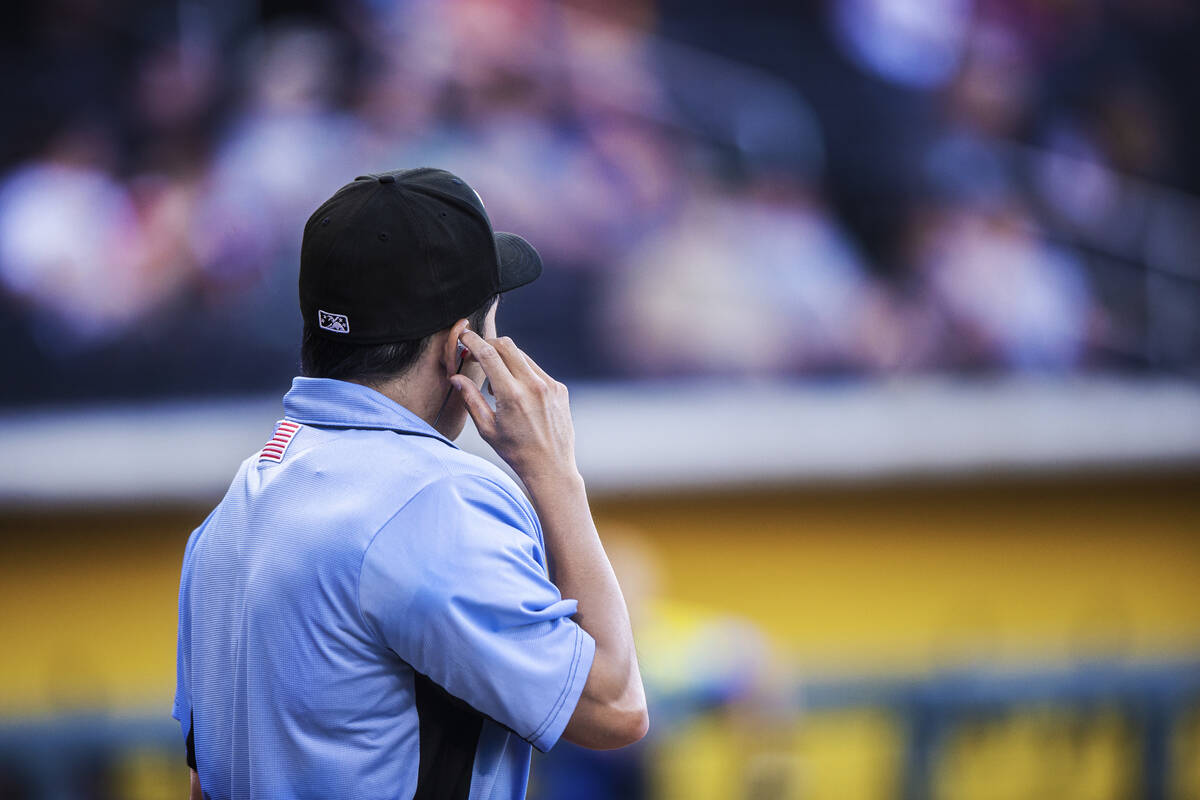 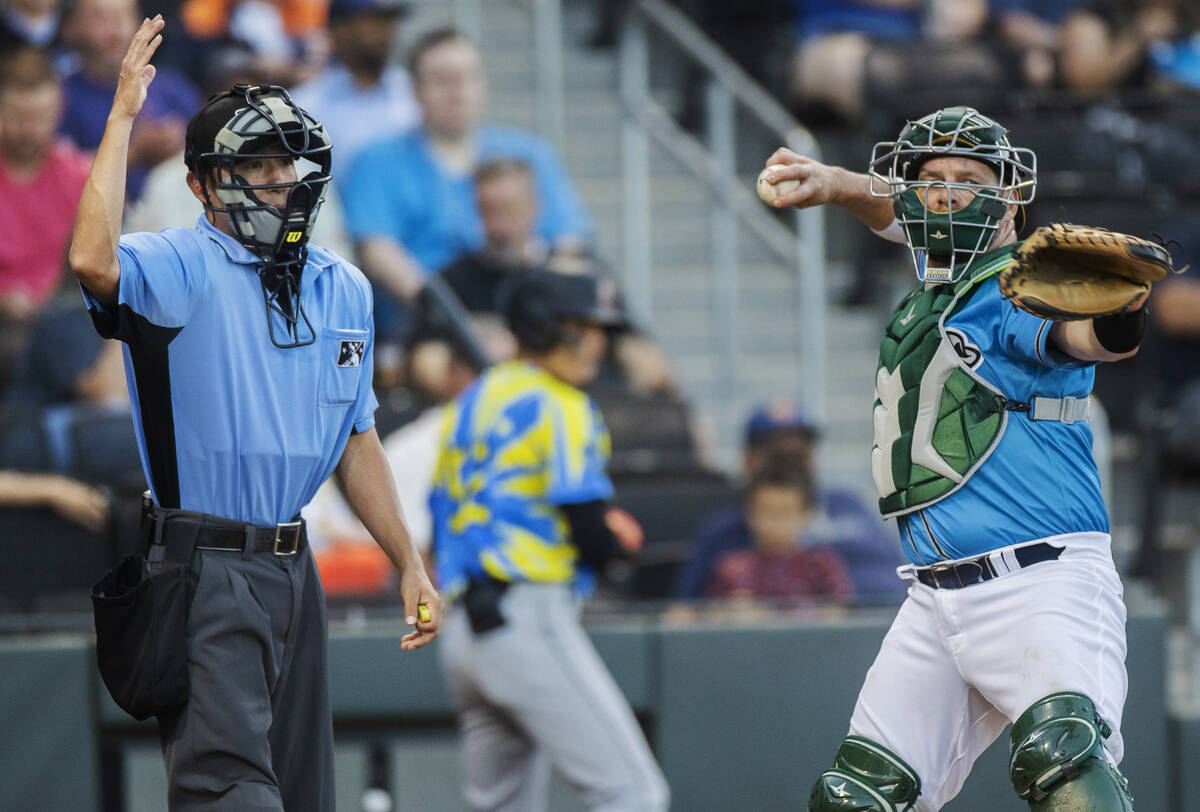 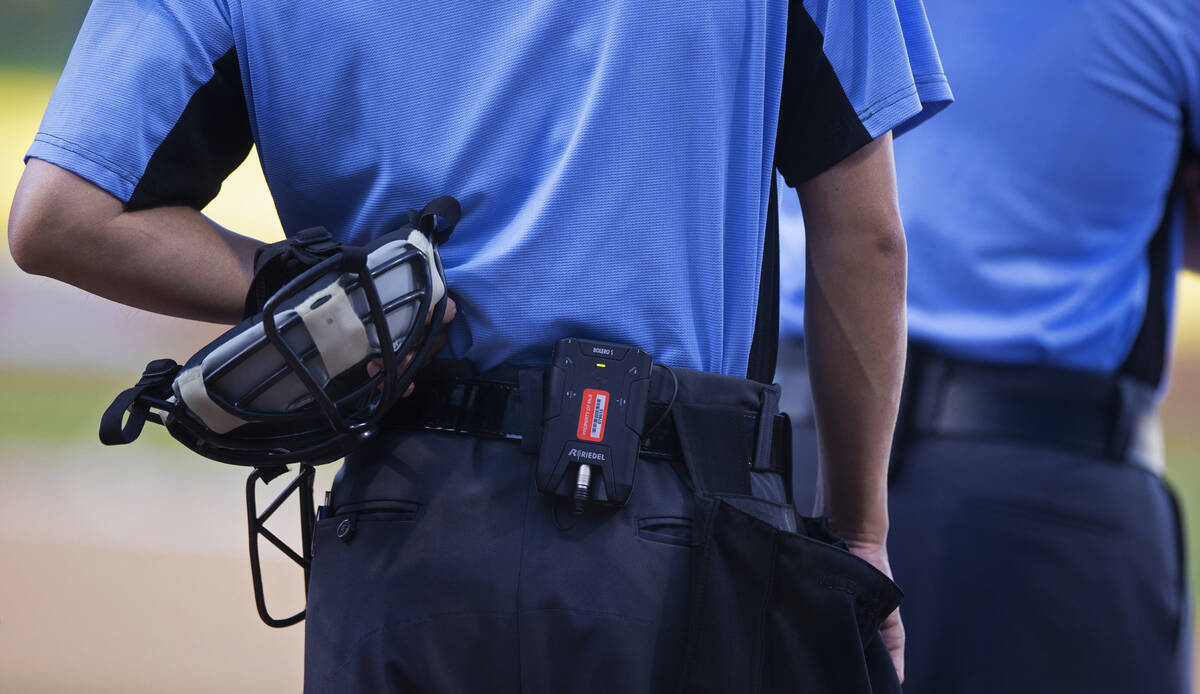 At 7:07 on an idyllic Tuesday night for baseball, right-hander Collin Wiles of the Reyes de Plata (aka: Aviators) threw his first pitch toward home plate. Bryce Johnson of the Sacramento Dorados (more familiar name: River Cats) failed to offer at it.

The Automated Ball-Strike era at Las Vegas Ballpark officially was underway. Even if nobody in the crowd of 6,752 seemed to notice during the Aviators’ 8-7 victory in 11 innings.

From an appearance standpoint, the debut of the new robot umpire was about as exciting as watching a call-up from Midland go 0-for-4 with three strikeouts and a foul popout to the catcher.

There was no camera lens with a red dot in the middle calling balls and strikes with a calm, measured tone as HAL 9000 in “2001: A Space Odyssey” might. Nothing warning Will Robinson of danger, or even a cursory caution to Aviators manager Fran Riordan when Sacramento put ducks on the pond with less than two out.

In fact, if you didn’t have a keen eye and notice what appeared to be a series of security cameras attached to the rim of the ballpark, not even the most astute observer of the game would have known that ABS was in the house.

“I look forward to seeing how it works, to be honest,” said Bruce Bochy, who managed the San Francisco Giants to three World Series titles, hit the first home run at old Cashman Field downtown and is the most astute observer you could hope to find at Las Vegas Ballpark on an idyllic Tuesday night.

“I’d be lying if I said I didn’t like the old way, with the umpires working back there. But I could have used it in my 25 years of managing. I spent a lot of money on fines (after being ejected for arguing balls and strikes).”

Unlike the future Hall of Fame skipper — “Technology doesn’t wait on anybody. The major leagues are trying a lot of things to make the game more entertaining, (add) more action, speed it up and get it right,” Bochy said — MLB isn’t saying a whole lot about ABS.

The team, adhering to a MLB edict, did not make Riordan or his players available to talk about the system that debuted during the Aviators’ recent road trip and has been called a work in progress.

Those cameras attached to the roof track pitches and pitch location. The information is relayed to the ABS operator in the ballpark and then a blip is sent to an earpiece worn by the home plate umpire.

The process takes far less time than it would for Earl Weaver to get thrown out of a game for arguing balls and strikes.

“The technology, I think, has worked well,” Riordan told the San Francisco Chronicle after the Aviators’ May 24 game at Tacoma when it still was OK to ask questions about the experimental technology. “We have access to the ABS in the dugout, so hitters and pitchers can come in after innings or after at-bats and see where the strikes are being called and balls are being called.

“There have been some tough looks with pitchers missing their spots on either edge of the plate, and those pitches being called strikes — if you’re a fan and you don’t know ABS is in play, the optics aren’t very good,” Riordan said. “But I think just having the gray area of the strike zone eliminated has been good for both the hitters and pitchers.”

As a batter, Aviators catcher Shea Langeliers is sold on the RoboUmp. As a catcher, he said it will take some getting used to.

“Like when you’re set up on one side of the plate and a pitch is on the other side, and it’s still called a strike if it’s there (within ABS parameters),” the A’s top prospect told the Chronicle about the optic Riordan had mentioned.

Aviators left-hander Jared Koenig, who is emerging as one of the Pacific Coast League’s top starting pitchers, was more critical.

“We’re relying on that it’s actually being calibrated at each stadium based on (the strike zones of) each hitter,” Koenig said. “So far, what I’ve seen has not been that. So we’re guessing what the zone is now versus with an umpire you at least have a fixed zone once we figure that out.”

But even after the kinks get worked out and an adjustment period passes, there still will be one thing about ABS that staunch baseball traditionalists will always find abhorrent.

“No more arguing with the umpire,” Langeliers said.