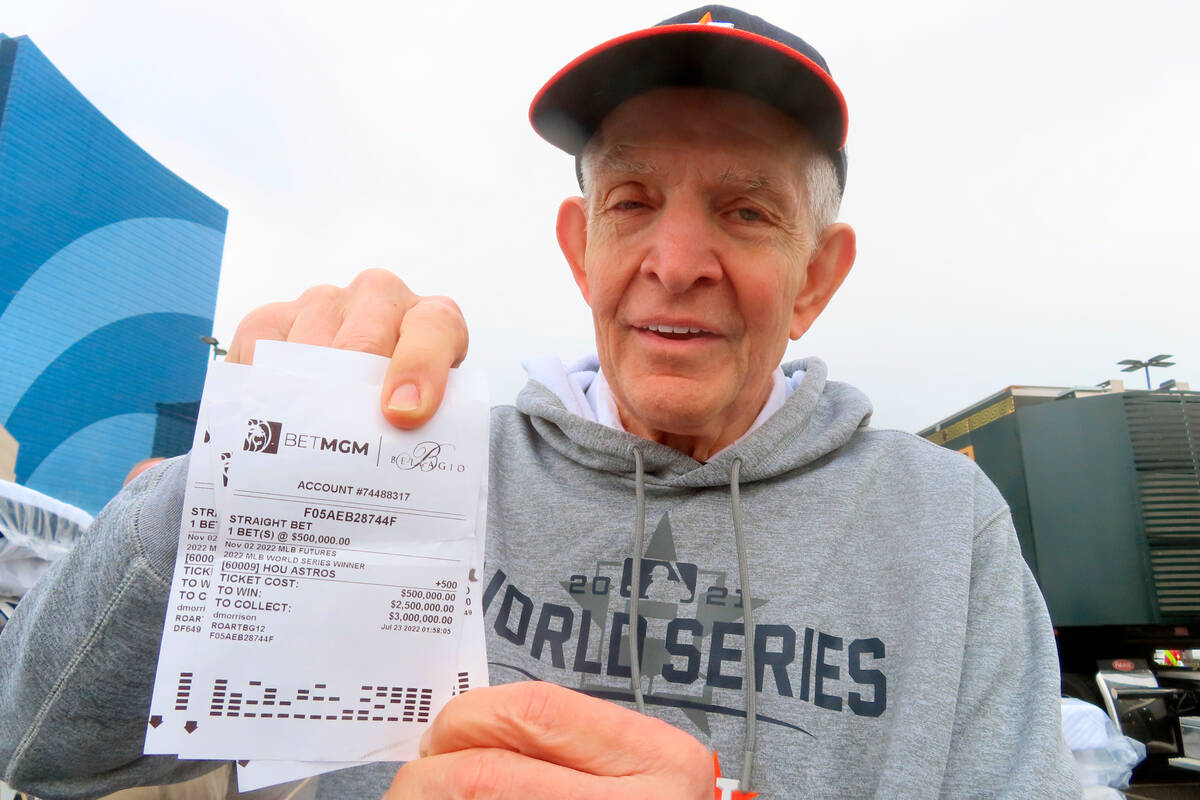 Jim "Mattress Mack" McIngvale, of Houston, holds some of the tickets in Atlantic City N.J., Tuesday, Nov. 1, 2022, showing bets he has made on the Houston Astros to win the baseball World Series. A prolific gambler with a knack for attention-getting bets stands to win nearly $75 million if the Houston Astros win the World Series, including what sports books say would be the largest payout on a single legal sports bet in U.S. history. McIngvale has wagered a total of $10 million with numerous sports books on an Astros victory. (AP Photo/Wayne Parry) 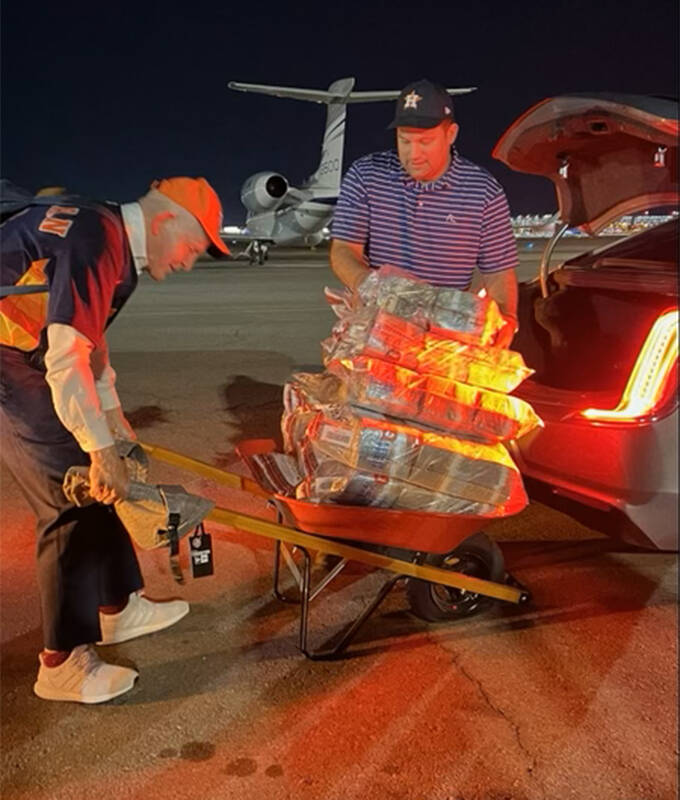 On the lunar calendar, 2022 was the Year of the Tiger.

On the sports betting calendar, it was the Year of Mattress Mack.

It certainly didn’t appear to be his year when it started. Houston furniture store owner Jim “Mattress Mack” McIngvale lost $6.1 million in January on Alabama to win the College Football Playoff and $9.5 million in February on the Bengals to win the Super Bowl.

But, as McIngvale is fond of saying, a setback is just a setup for a comeback.

In April, he won $12.2 million when Kansas won the NCAA men’s basketball title to snap a $25 million losing streak on a series of multimillion-dollar bets to reduce risk on his furniture promotions.

That only set the stage for the richest payday in legal sports betting history.

In May and July, McIngvale, 71, placed $10 million in wagers to win $72.6 million on the Astros to win the World Series.

In November, after Houston beat Philadelphia in six games to win it all, McIngvale flew to Las Vegas to collect $30 million in winnings from Caesars Sportsbook and $10 million from BetMGM. To punctuate his historic win, he left town with a wheelbarrow full of cash.

Stay tuned in 2023, when McIngvale will again try to force books to go to the mattresses. He already has $3.5 million riding to win $30.9 million on the Houston Cougars to win the NCAA basketball title.

Here are some other memorable sports betting moments from 2022:

McIngvale wasn’t the only high-stakes gambler with a catchy nickname to hit multiple multimillion-dollar winners in 2022.

Chicago-area car dealer Marco Piemonte, aka “Million Dollar Marco,” hit a handful of parlays that paid seven figures, including a $31,000 five-teamer that paid $2.88 million when the Raiders beat the Patriots in improbable fashion.

The first leg of the parlay was a live money line bet at 7-1 odds on the Vikings, who erased a 33-0 halftime deficit en route to a 39-36 overtime victory over the Colts that was the biggest comeback in NFL history.

The final leg was a money-line bet on the Raiders, who trailed 24-17 in the final minute before scoring two touchdowns in the final 32 seconds to pull out a shocking 30-24 victory. Chandler Jones returned an unnecessary lateral by New England’s Jakobi Meyers on the game’s final play to give the Raiders — and Piemonte — the win.

Las Vegas books took a beating on the game.

The Raiders have taken bettors on a roller-coaster ride this season that has mostly left them feeling nauseous.

They lost four games in which they’ve blown double-digit halftime leads and failed to cover three of them:

In Week 14, they blew a 16-3 lead over the Rams in the final 3:19 of a stunning 17-16 loss as 6-point favorites. Baker Mayfield directed two late TD drives only two days after he was claimed off waivers.

But the Silver and Black waited until Christmas Eve to deal one gambler arguably the most painful loss of the year.

The Raiders cost a Circa Survivor contestant with the alias “Maddog” the $6.1 million prize when they lost to the Steelers 13-10 at Pittsburgh.

Maddog already had advanced with the Vikings and was one of only four entrants left in the $1,000-entry contest entering Saturday night’s game. The other three entrants had Pittsburgh. If the Raiders won, they would be eliminated and Maddog would be the sole Survivor.

The Raiders led 10-3 at halftime but didn’t score in the second half as Derek Carr threw three interceptions. They were clinging to a 10-6 lead with 46 seconds left when Kenny Pickett fired a 14-yard TD pass to George Pickens to lift the Steelers to the win and deal a devastating defeat to the Circa contestant.

Still alive on Christmas Day, Maddog took Miami and was eliminated when the Dolphins blew a 20-10 lead in a 26-20 loss to Green Bay.

Bettors suffer bad beats on a daily basis. On Monday, for example, the Pistons (+5½) led the Clippers by 14 with 3:34 left when Los Angeles coach Tyronn Lue pulled his starters. The Clippers finished the fourth quarter on a 16-2 run to force overtime, then outscored Detroit 14-3 to win 142-131 and cover the spread.

But our pick for worst beat of the year goes to those unfortunate souls who backed Utah State +17 over Boise State.

The Aggies trailed 28-10 in the second half before scoring TDs on back-to-back possessions to close the gap to 28-23. Utah State threatened to pull off the outright upset in the final minutes before turning it over on downs at the Boise State 14 with 1:28 left.

The Aggies were still covering, but then disaster struck.

On fourth-and-17 with 31 seconds left, Utah State quarterback Cooper Legas threw an interception that was returned 48 yards for a TD to give the Broncos a 42-23 victory and deal Aggies bettors a bad beat for the ages.