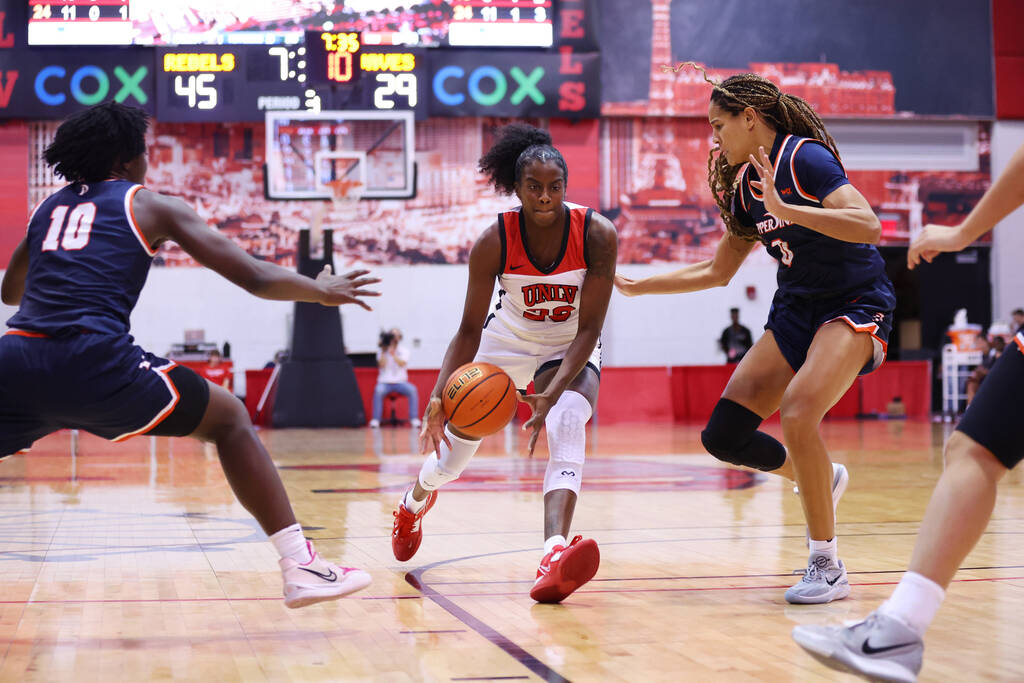 Its nonconference season is finally complete. Coach Lindy La Rocque and the Lady Rebels have faced injuries, long travel and everything in between. Now, they prepare for Mountain West play and the chance to defend their crown.

“I think we’ve learned a lot about ourselves. That’s the point of our nonconference season,” La Rocque said. “We’ve faced different doses of adversity and we’ve had to respond.”

A second consecutive conference championship remains the goal for La Rocque and UNLV. The team returns four starters from the 2021-22 title-winning squad, along with several key contributors. Despite bringing back so many familiar faces, UNLV enters conference play with some question marks.

La Rocque, now in her third season, admitted her 10-2 team has spent a lot of time continuing to learn and get comfortable playing with each other.

“From the outside looking in, it might’ve seemed like we had it all figured out,” La Roque said. “But internally, we knew it was going to be different. We’ve had to figure that out together. I think we’re really close.

“We’re not a finished product, but I like the direction that we’re heading.”

Some of UNLV’s uncertainty surrounds one of the starting forward positions. During the past season, the role was filled by Khayla Rooks. The former Washington transfer combined size and physicality with a pass-first approach to create opportunities for her teammates. Rooks was also a calming, veteran presence for a younger team.

Entering this season, UNLV seemed to have a ready-made replacement for Rooks in reigning Mountain West sixth player of the year Nneka Obiazor. The junior forward impressed early, providing physicality even though the 5-foot-10-inch Obiazor stands three inches shorter than Rooks.

Obiazor scored a career-high 27 points against Oral Roberts in the second game of the season. However, she injured her knee in early December and is still considered questionable ahead of Thursday’s Mountain West opener.

Fellow forward Alyssa Brown, who also missed several games with a knee injury, is expected to return against Wyoming.

Obiazor and Brown were clearly missed during UNLV’s 87-62 loss to Oklahoma State, the lone Power Five opponent on the Lady Rebels’ schedule. La Rocque’s team was outrebounded 38-32 and allowed 42 points in the lane.

While the Rebels may have some answers to replace Rooks’ size and physicality on the court, junior center and 2021-22 Mountain West Player of the Year Desi-Rae Young may be the solution for supplying some of Rooks’ other skills.

La Rocque has continuously praised the development of Young’s passing since the 2022-23 season began. Young’s averaging 2.4 assists per game, an improvement on her 1.8 assists during the past season.

Young has made other large strides as well. La Rocque said her center has a better understanding of how she impacts her teammates both on and off the court, and is maturing into a capable leader to fill the void left by Rooks.

“Over the nonconference play, that’s something that’s really resonated with her,” La Rocque said. “She knows we need that.”