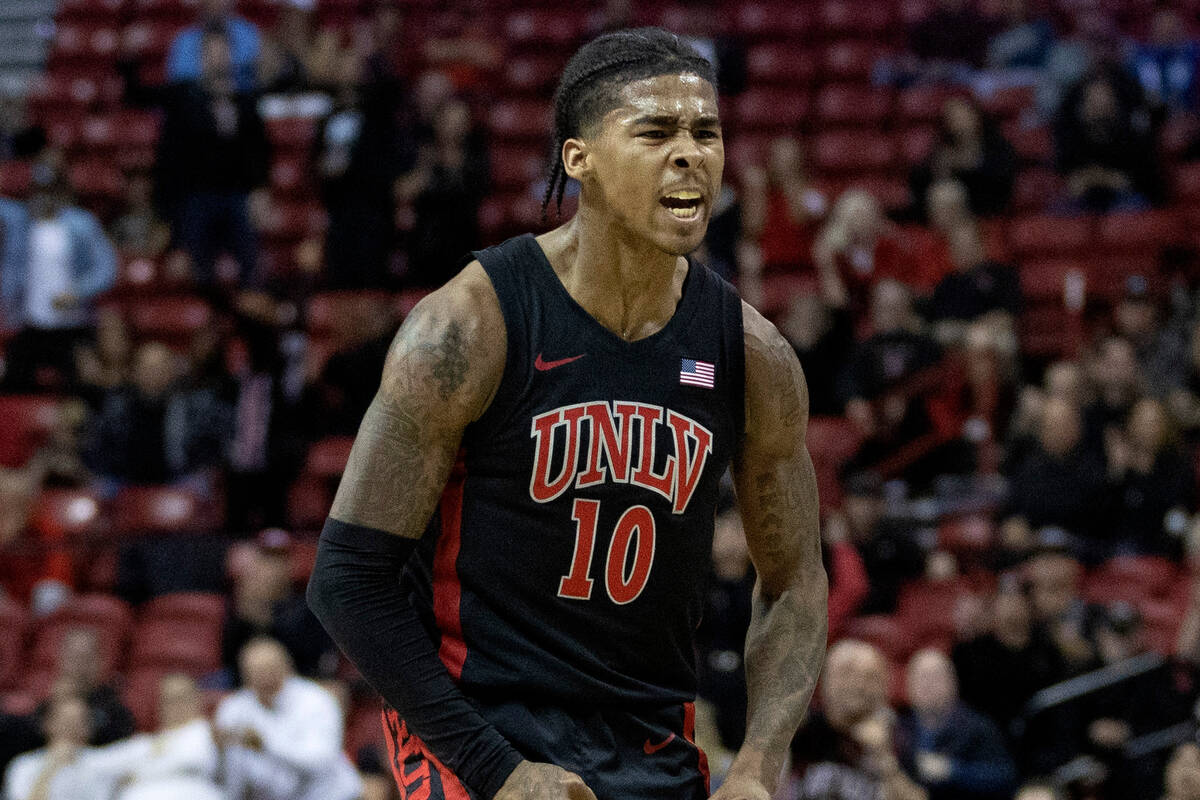 UNLV Rebels guard Keshon Gilbert (10) celebrates after his team scored during the second half of an NCAA college basketball game against the Dayton Flyers at the Thomas & Mack Center on Tuesday, Nov. 15, 2022, in Las Vegas. (Ellen Schmidt/Las Vegas Review-Journal) @ellenschmidttt

SAN JUAN CAPISTRANO, Calif. — Rebels senior Luis Rodriguez felt the adrenaline surge through his body. UNLV’s 71-62 win against Minnesota was essentially wrapped up, but the former Ole Miss wing had to add an exclamation point.

With 1:22 remaining, Rodriguez stripped a Minnesota guard and found himself all alone under the rim. He had to do something special, so the Los Angeles native rose up and threw down a vicious windmill dunk.

Rodriguez’s highlight-reel slam was greeted by huge cheers from his personal cheering section of friends and family. “This was a lot of the reason why I decided to play at UNLV,” Rodriguez said. “Just having that support, being closer to home, so just them being there was everything.”

Rodriguez’s dunk capped off the Rebels’ strongest performance of the season. UNLV’s convincing 71-62 win against Big Ten competition Minnesota Wednesday at the Pavilion at JSerra in San Juan Capistrano, California, wrapped up the Rebels’ two-game experience at the SoCal Challenge.

Similarly to Rodriguez, Harkless, a San Bernardino, California, native, also said he felt the hometown boost during the Rebels’ first road trip of the season. The reigning Mountain West Player of the Week said he’d seen people he hadn’t communicated with in years show up to support him.

The Rebels finally found the strong start they’ve been looking for on offense. UNLV trailed at halftime in each of their past three games — all wins — but it blitzed Minnesota 10-3 in the first four minutes. It took UNLV 12 minutes to reach double figures against Southern Illinois Monday.

UNLV led 38-24 at halftime. The Rebels shot 46.7 percent from 3, forced 11 turnovers and held the much larger Golden Gophers (4-2) to just eight points in the lane. Kruger said the Rebels set the tone early on defense, which led to better opportunities on offense.

“The first half was probably our best half of the year,” Kruger said.

He also credited UNLV’s strong start to reserve guards Justin Webster and Jackie Johnson III, who scored 13 points in 17 minutes, for fitting in seamlessly once they were summoned from the bench.

Webster was called into action particularly early after fifth-year wing Elijah Parquet got into early foul trouble. Webster had three points, three rebounds, two assists and two steals in 23 minutes. He finished a game-best plus-14.

The senior did all the little things for the Rebels, best epitomized by one sequence near the five-minute mark in the first half. After Rodriguez air-balled a 3, Webster chased down the missed shot as it bounced out of bounds. He leapt over the baseline, spun in mid-air and fired the ball to a wide-open Harkless at the top of the key for a wide-open 3.

“The best part about Justin is he’ll never change,” Kruger said. “If he plays two minutes or 30 minutes, he’s never going to change. He’s going to be the exact, same person.”