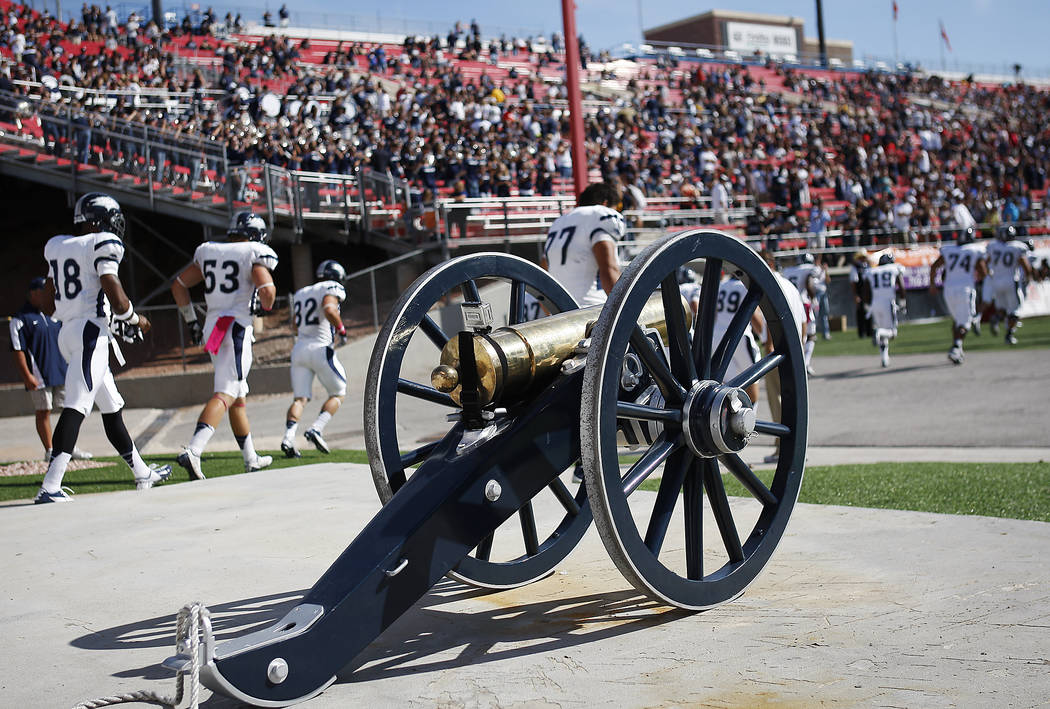 UNR players take the field for the second half while playing for the Fremont Cannon football trophy at Sam Boyd Stadium in Las Vegas on Oct. 13, 2012. (Jason Bean/Las Vegas Review-Journal) 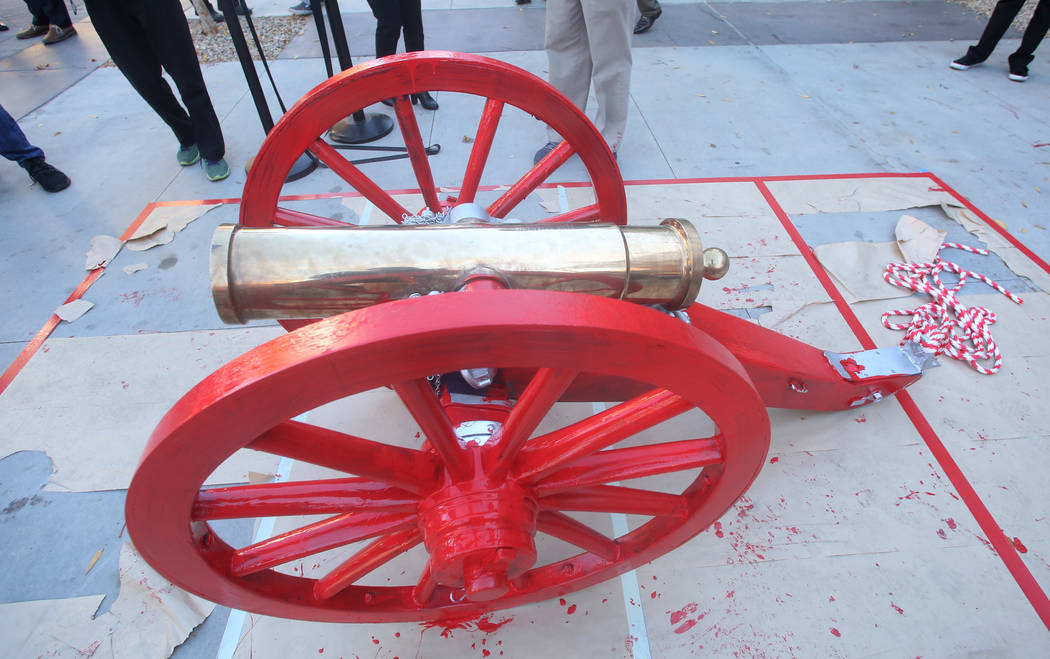 The Fremont Cannon is displayed after being painted red outside of the Student Union at UNLV on Monday, Nov, 26, 2019, in celebration to the UNLV's football team victory against in-state rival the University of Nevada, Reno. Bizuayehu Tesfaye Las Vegas Review-Journal @bizutesfaye 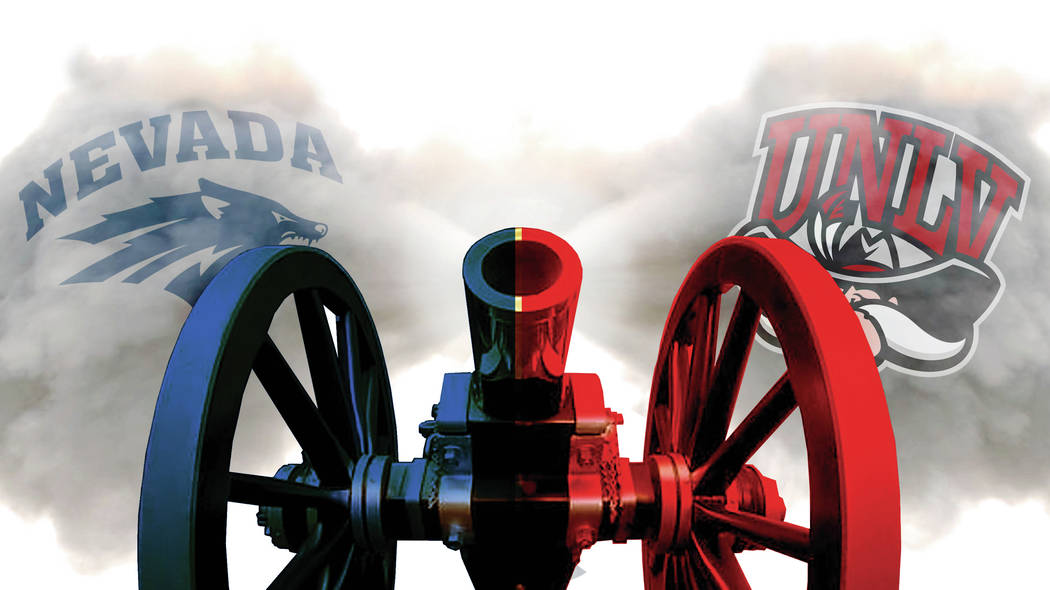 With all respect due Floyd of Rosedale, Paul Bunyan’s Axe, the Jeweled Shillelagh, the Little Brown Jug, the Old Oaken Bucket and all the other one-of-a-kind trophies awarded to the winner of college football rivalry games, all would be blown away by the Fremont Cannon.

Or at least would have been blown away before the 1999 season when the 545-pound howitzer became inoperable.

UNLV and UNR have been playing for the right to possess the cannon since 1969. The North versus South rivalry between Nevada’s two football-playing schools has taken its rightful place among the NCAA’s most bitter, and the Fremont Cannon is a big reason for it.

Many memorable quotes have been uttered in deference to the cannon over the years, not the least of which was by former Rebels coach John Robinson on why the unique trophy was better than Army’s mule or Navy’s goat.

“The cannon is great. It’s too heavy to steal,” said Robinson, who guided UNLV to five consecutive victories over UNR during the early 2000s. “Unless you bring a truck or something.”

What is the Fremont Cannon?

The Fremont Cannon is a replica of the 19th-century howitzer that American explorer and statesman John C. Fremont — you may be familiar with the downtown Las Vegas street named for him — abandoned in a Sierra Nevada snow bank during a frosty 1843 expedition.

A copy of the original cannon weighing 545 pounds and costing $10,000 — making the Fremont Cannon the heaviest as well as the most expensive trophy in college football after allowing for inflation — was donated by the Kennecott Copper mining company in 1970 after Bill Ireland, UNLV’s first football coach, came up with the novel trophy idea.

When the Wolf Pack won the first game between the schools in 1969, the Cannon still was being built. It wasn’t presented to the winning side until the following season, when the Rebels won 42-30.

The tradition most associated with the Fremont Cannon is that its carriage is painted red (following a UNLV victory) or blue (after a UNR win).

For nearly 30 years, it was shot off by the team that possessed it after touchdowns during games between the rivals. If you weren’t braced for this tradition, chances are you spilled your beer.

But the cannon hasn’t been fired since 1999, when it became inoperable and made cleanup after touchdowns a little easier.

“We not only shot it, but we shot some of our players one time,” said Chris Ault, UNR’s renowned former coach. “I remember Steve Bryant (a linebacker for the 1990 Wolf Pack team that played for the Division 1-AA championship) getting shot in the back with those paper wads and his jersey bending up and smoke coming out.

As intense as the rivalry was and still is, it became intermittent during much of the 1980s when the schools played under different NCAA classifications. There were no games from 1980 to 1982 and in 1984, 1986 and 1988. UNLV and UNR have met in every season since.

UNR enjoys a 29-18 series edge, including a victory by forfeit in 1983 — UNLV won 28-18 but was forced to forsake the victory for using ineligible players.

Ault, who had three stints as UNR coach, guided the Wolf Pack in 22 Fremont Cannon games, way more than any other coach. His 16-6 record and winning percentage of .727 tops all UNR coaches. Robinson’s win percentage of .833 and five victories lead the 11 men who have coached UNLV in the rivalry game.

While Ault has coached in the Fremont Cannon game during three intervals in his Hall of Fame career, only one man has coached both sides — in back-to-back seasons, no less.

In 1993, former UNLV assistant Jeff Horton led UNR to a 49-14 victory over the Rebels. During the offseason, he returned to Las Vegas as UNLV’s head coach and guided the Rebels to a 32-27 upset in one of the most memorable games in Fremont Cannon history.

Wolf Pack fans still refer to it as “Red Defection.” It was UNLV’s only victory in the series during an 11-game stretch.

“It was an unbelievably exciting game,” Horton said in 2014. “Hopefully, that maybe sparked the rivalry a little bit. That’s what college football’s all about. You want people to be intense about it and be into it. If nobody cared, it’s not much of a rivalry.”

The Fremont Cannon has been disassembled twice by the team possessing it — once by design and once by accident.

In 1978, following the Wolf Pack’s first victory over the Rebels in four years, Ault convinced McCarran International Airport officials that it would be OK for the UNR players to take the Cannon apart so it could ride in the airplane with the players on the flight back to Reno — something that would never happen today after the advent of strict travel regulations.

UNR star running back Frank Hawkins, a Las Vegas native, rode with the shiny barrel on his lap.

In 2000, exuberant UNLV fans and players dropped the cannon during a postgame celebration after halting UNR’s five-game series winning streak. It cost the Rebels $1,500 to repair the cannon, which school officials considered money well spent.

While the cannon was being fixed, it was discovered that UNR had etched an inscription on the inside of the barrel: University of Notta Lotta Victories. UNLV responded by inscribing a countering shot: University of Northern Rejects.

While competition is almost always at a fever pitch when UNLV and UNR meet, hostilities also have been known to spill over beyond the playing field.

In 1995, there was a pregame brawl, and after the Wolf Pack went for a 2-point conversion to cap a 55-32 victory, UNLV defensive back Quincy Sanders tossed his helmet at Ault.

Robinson wasn’t as fortunate in 2003 when he was struck in the eye with a water bottle as the teams left the field at halftime.