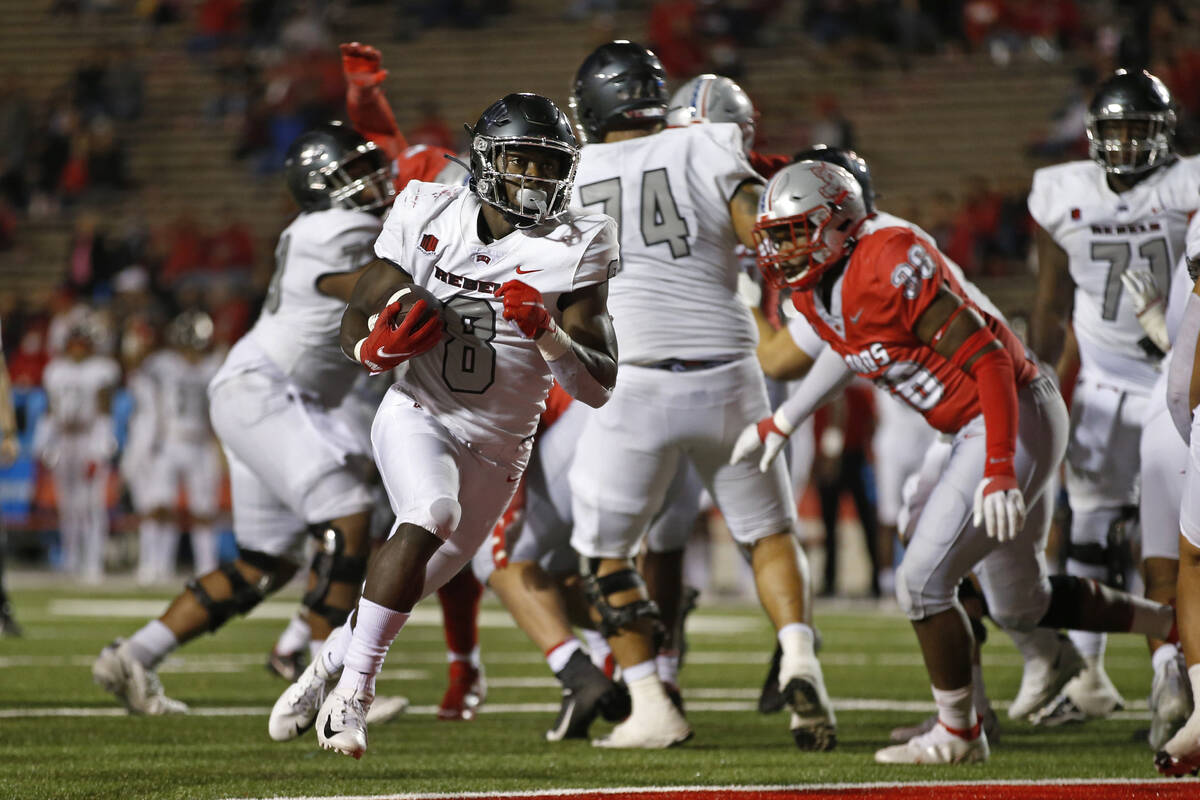 UNLV running back Charles Williams (8) sprints to the end zone for a touchdown against New Mexico during the second half of an NCAA college football game Saturday, Nov. 6, 2021, in Albuquerque, N.M. (AP Photo/Andres Leighton) 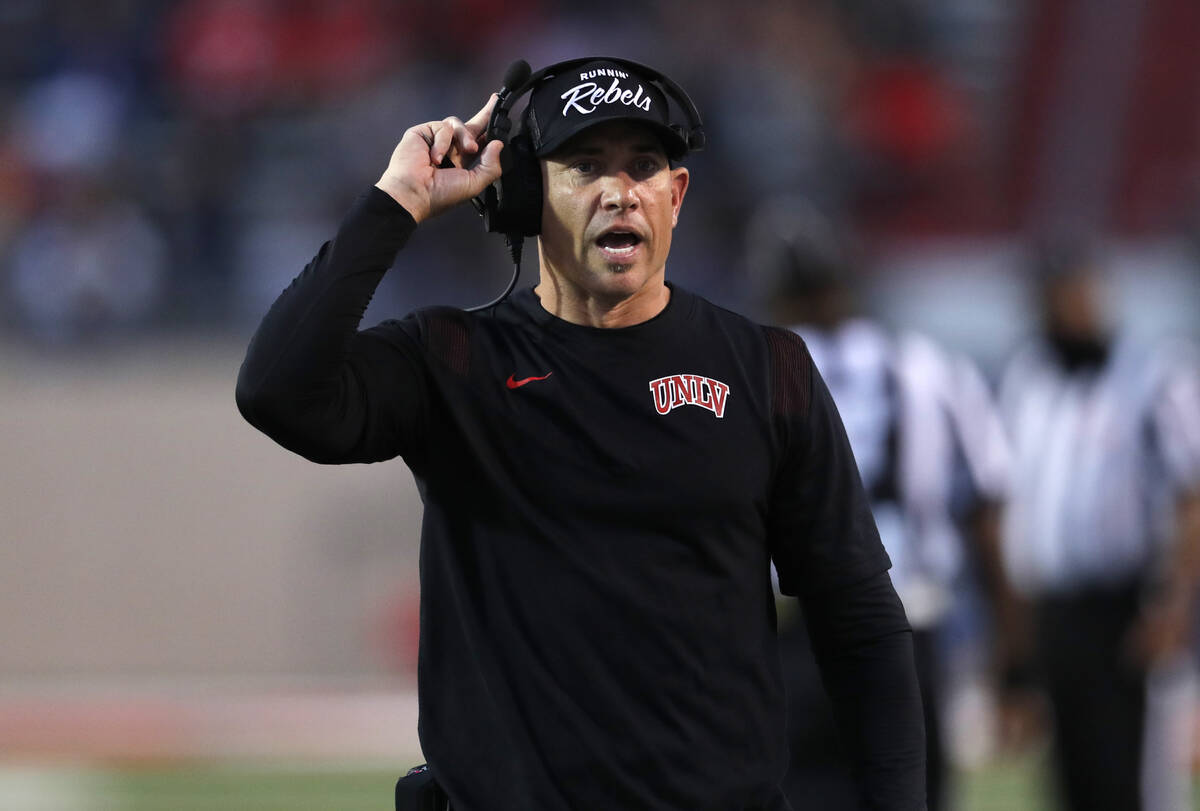 UNLV coach Marcus Arroyo walks the sidelines during the first half of an NCAA college football game against New Mexico on Saturday, Nov. 6, 2021, in Albuquerque, N.M. (AP Photo/Andres Leighton) 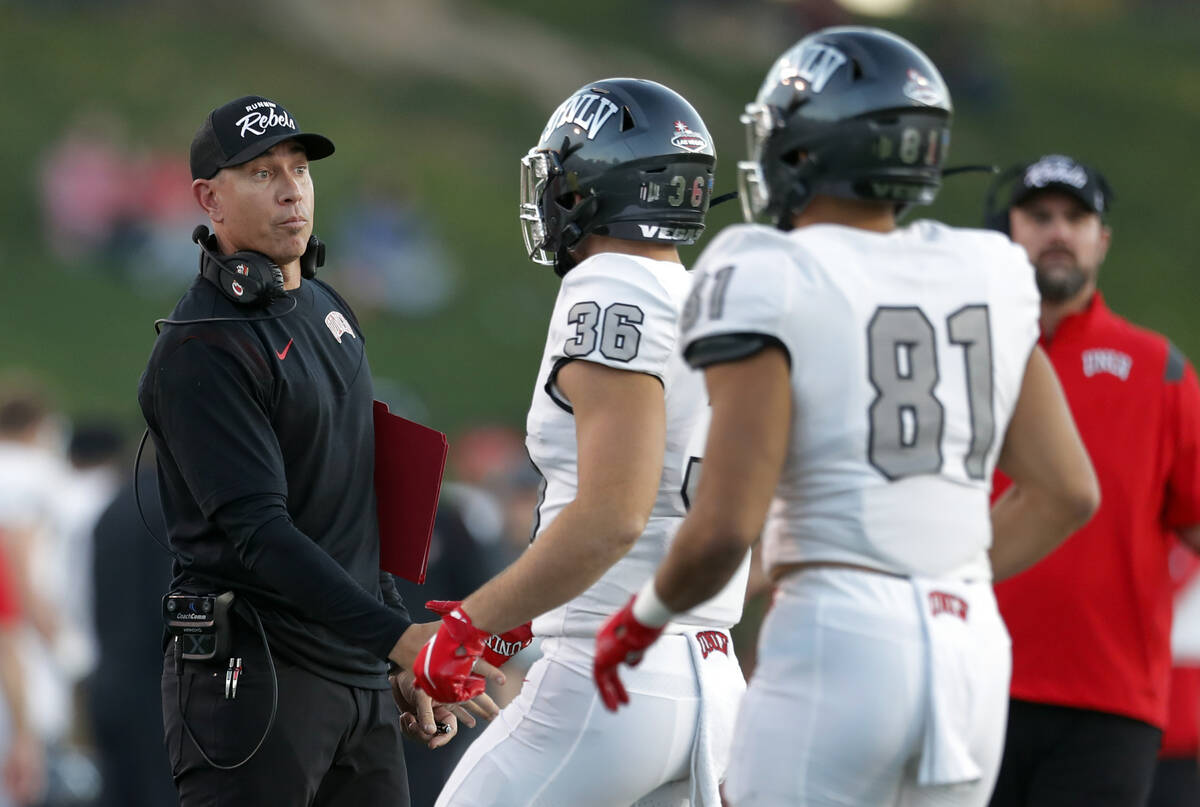 UNLV coach Marcus Arroyo, left, talks with running back Chad Magyar (36) during the first half of an NCAA college football game against New Mexico on Saturday, Nov. 6, 2021, in Albuquerque, N.M. (AP Photo/Andres Leighton) 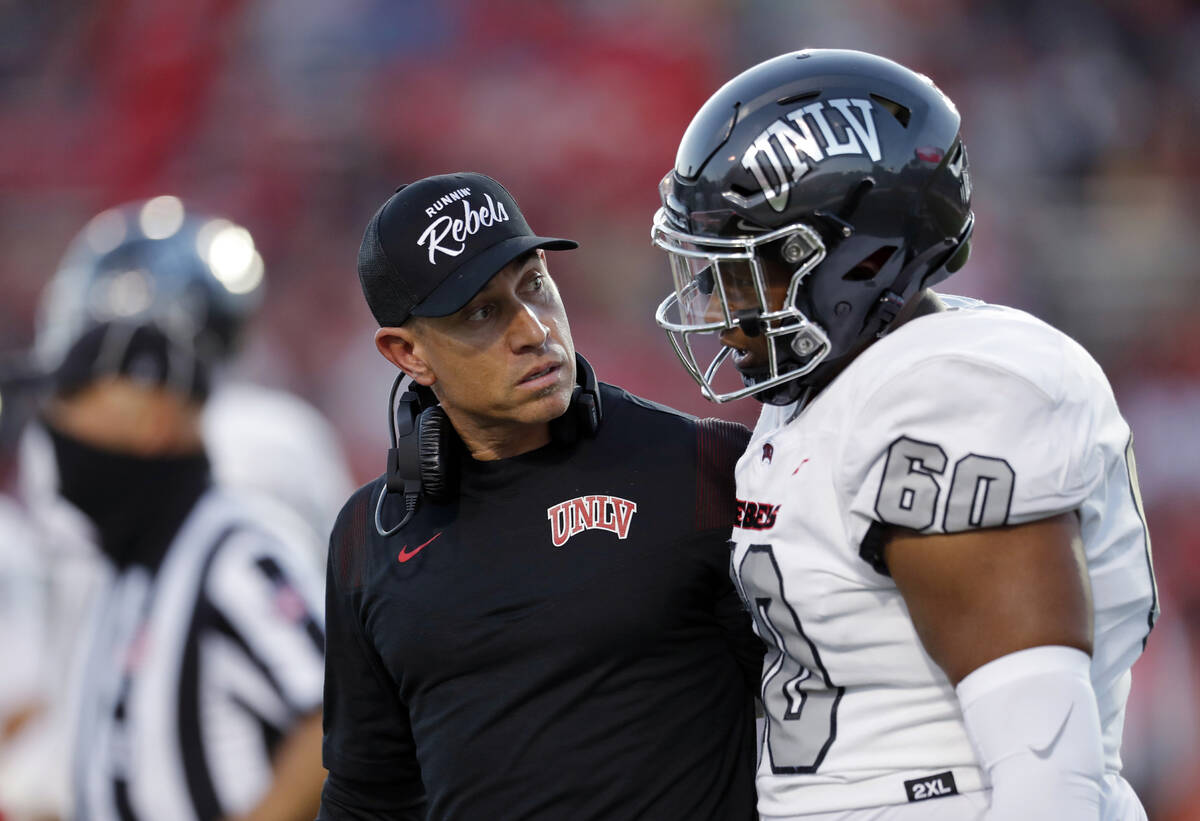 When UNLV game day against Hawaii dawns Saturday, it will have been seven days since the Rebels last won a football game.

Before defeating New Mexico 31-17 last week, it had been 707 days since the Rebels last won. The road victory snapped what was briefly the nation’s longest losing streak at 14 games and was Marcus Arroyo’s first as UNLV coach.

Afterward, his players gave him the game ball. Arroyo gave it right back to running back Charles Williams, who had set the school record for career rushing yards in the game.

Deciding who gets the game ball is a good problem to have for UNLV (1-8, 1-4 Mountain West), which will try to make it two straight victories when it hosts Hawaii (4-6, 1-4) at 1 p.m. Saturday at Allegiant Stadium.

“To play physical and control the game … and to push through and finish it was a step in the right direction,” Arroyo said during his news conference this week.

He said the Rebels celebrated as a team should after winning. But then it was like coaches tell players after they score a touchdown: Act like you’ve been there before.

Get up and go

“The one thing that’s great about a win is you can feel good about what you did, and then you get a chance to coach guys harder and see how much (performance) was left out there,” Arroyo said. “We won’t change very much from a win or a loss. There’s still a lot of opportunity for us to find a lot of good regardless of the outcome.”

Starting against Hawaii. This is another winnable game for the Rebels, who are 3-point underdogs and have won nine of the past 17 meetings against the Warriors. Five of the past eight games have been decided by a touchdown or less, though Hawaii won last year 38-21.

Much like the Rebels, Hawaii has been competitive against some of the Mountain West’s top teams. The Warriors are coming off a 17-10 home loss to 24th-ranked San Diego State and earlier this season handed No. 17 Fresno State a 27-24 defeat.

Arroyo, who rarely shows emotion during his news conferences, broke into a smile when asked about the early kickoff.

“I am ecstatic about the 1 p.m. kickoff. I love early games, you can get up and go,” he said before suggesting the large number of Hawaiians that call Las Vegas home will provide a lively atmosphere under Allegiant Stadium’s translucent roof.

In past games between the Rebels and Warriors at Sam Boyd Stadium, fights have broken out in the stands.

“Hopefully, it’s all legal,” Arroyo said. “I do love the fact that if there’s some excitement, some emotion about the buildup of a game between two teams, it makes it fun.”