The Cheyenne Commons strip mall looks like any other around Las Vegas, and the same goes for the apartment complex next door, The Grove.

But the two properties say a lot about the state of things in commercial real estate: The mall is in foreclosure, and the apartments have soared in value. 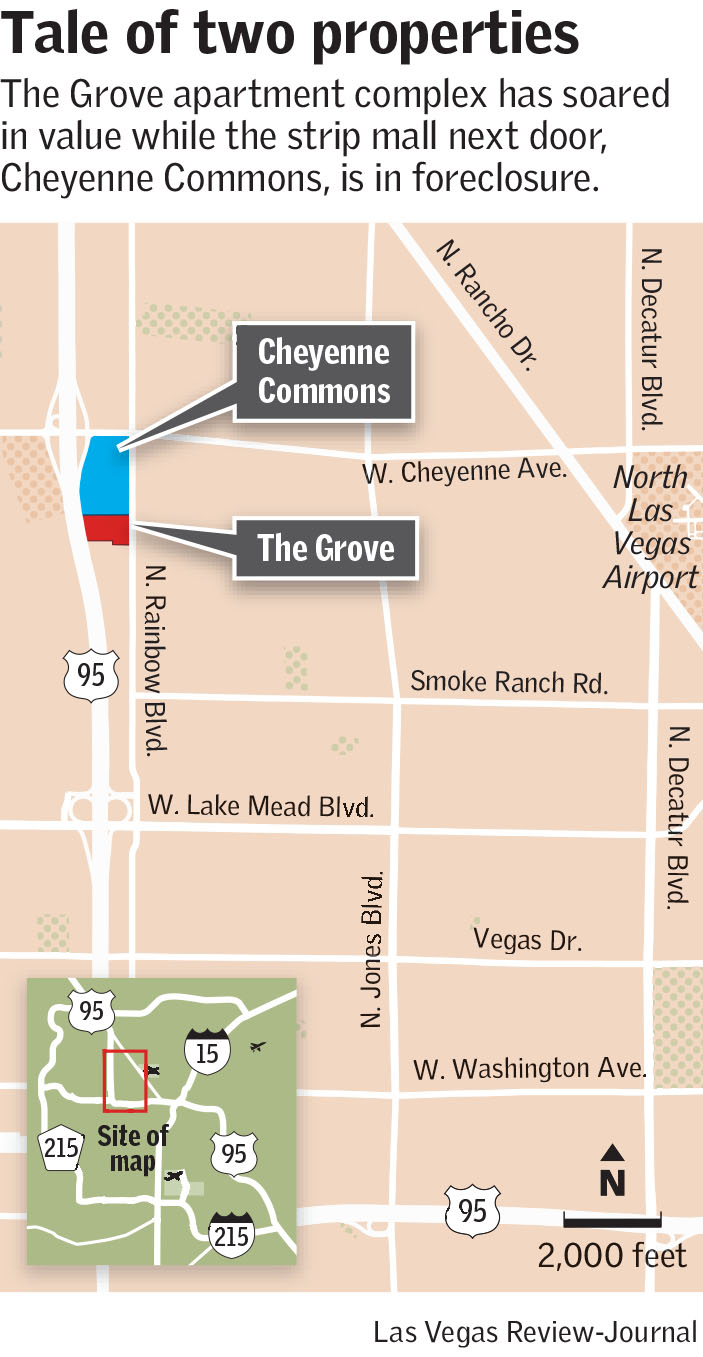 The Grove, 2901 N. Rainbow Blvd., near Cheyenne Avenue in the northwest valley, consists of several small buildings spread around a 13.5-acre parcel. It went into foreclosure during the recession, sold for $19.5 million two years ago and then traded hands last month for $34.5 million.

Southern California investor Sudha Reddy, co-founder of Haven Realty Capital, said The Grove’s occupancy rate was in the high-80s or low-90s when he bought the complex in summer 2016. His group spent more than $1 million on upgrades, and when they sold it last month, the 256-unit complex was 96 percent or 97 percent full, he said.

Bean partner Scott Stehman said the valley’s rental market has “come back in a strong way” from the recession, and the local economy isn’t nearly as dependent on construction as it was during the mid-2000s real estate bubble.

Prices of rental properties have climbed fast. Las Vegas broker Curt Allsop of ARA Newmark, which represented Haven Realty in the sale, said “virtually every deal we did this year” sold at a higher-than-expected price. The most he expected for The Grove, he said, was $34 million.

Meanwhile, brick-and-mortar retail is far from dead, but mall owners locally and nationally have lost tenants amid a glut of retailers and shopping centers and as consumers increasingly spend money at Amazon and other websites.

Cheyenne Commons, just north of The Grove, has plenty of tenants, including Walmart and Ross Dress for Less, but also several vacancies. Lenders foreclosed on the 35-acre plaza in summer 2017.

Sokol Murrizaj, owner of the Alka Water store at Cheyenne Commons, said he has been in the strip mall for five years. The 46-year-old Albania native said that his business does OK there and he wants to stay, but he lost some customers over the past year or two, and it’s “scary” to see neighboring stores shut down.

Logic Commercial Real Estate CEO Brendan Keating, whose firm is the property manager and leasing agent for Cheyenne Commons, said the strip mall is 80 percent occupied, up from 60 percent when Logic took charge in spring 2017.

Around $3 million of work has been put into the complex since then, he said, including to the parking lot, the roofs and the awnings.

New tenants include flooring supplier Floor & Decor and a dental office, both of which, he said, are internet-resistant.