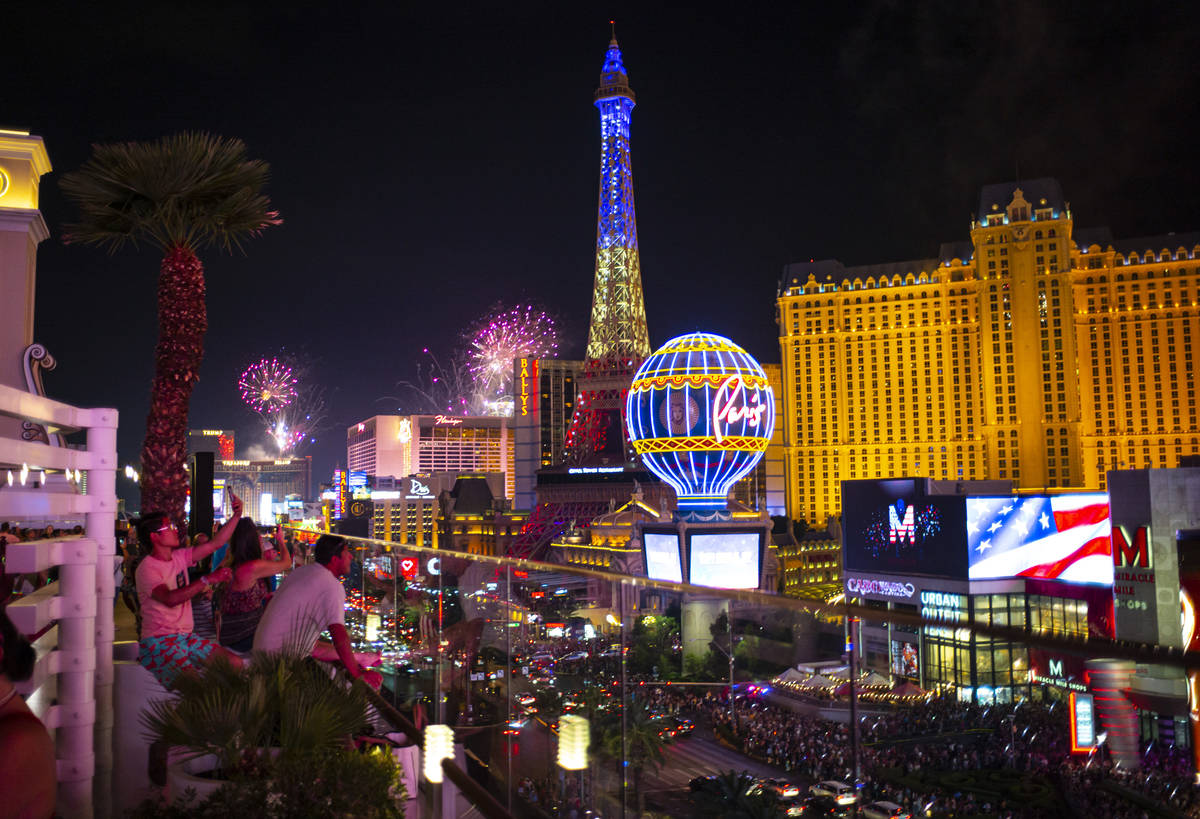 Fireworks go off along the Las Vegas Strip as people watch from the Boulevard Pool at The Cosmopolitan of Las Vegas on Sunday, July 4, 2021. (Chase Stevens/Las Vegas Review-Journal) @csstevensphoto 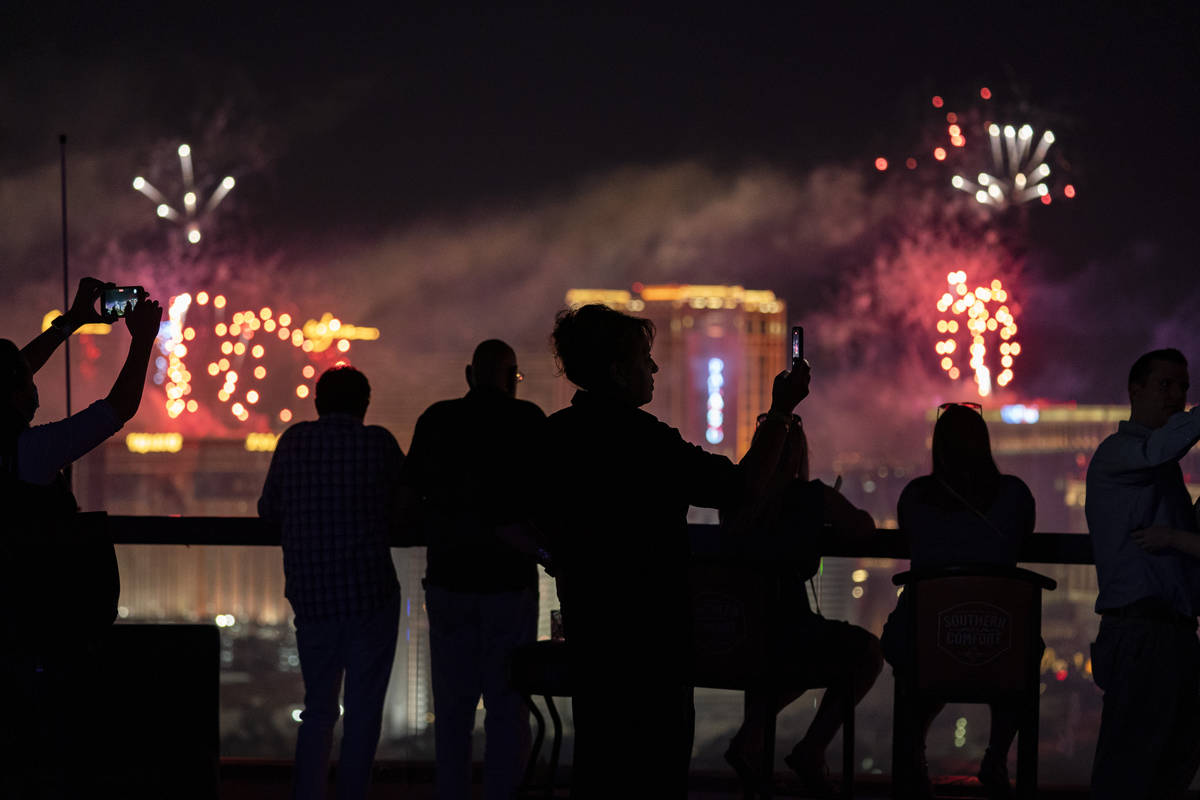 Spectators watch as fireworks explode over the Las Vegas Strip during a 4th of July Fireworks show in Las Vegas in 2021. (AP Photo/John Locher) 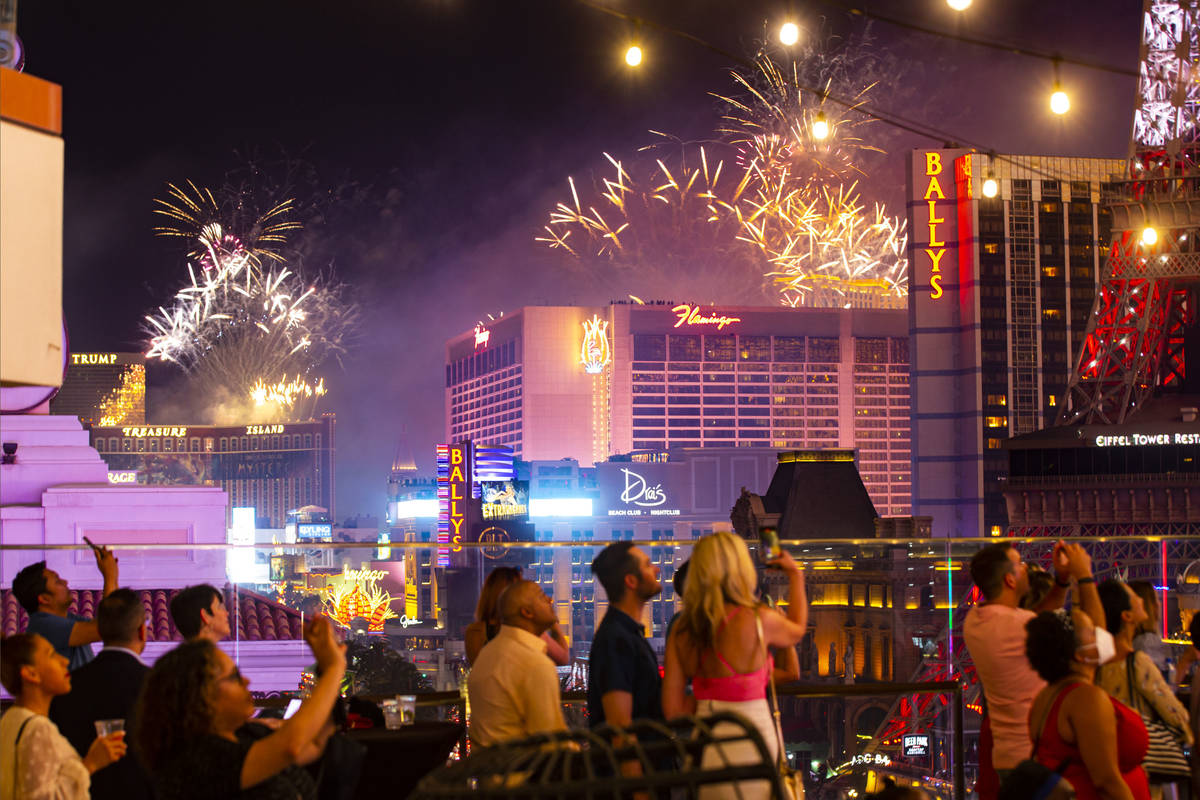 Fireworks go off along the Las Vegas Strip as people watch from the Boulevard Pool at The Cosmopolitan of Las Vegas on Sunday, July 4, 2021. (Chase Stevens/Las Vegas Review-Journal) @csstevensphoto

The roaring back of Southern Nevada’s economy has business leaders in the state bullish on Nevada’s outlook heading into the second half of 2021, according to a recent survey from UNLV.

A quarterly survey of business leaders conducted by the UNLV Center for Business and Economic Research showed the highest confidence level recorded since 2008, hitting an index score of 157.3 and eclipsing the previous high of 148.1 recorded in the first quarter of 2015.

According to a report released Tuesday, the index is a combination of five components, including business leaders’ expectations for general economic conditions in Nevada and expectations for their own industry’s sales, profits, hiring and capital expenditures.

The results, buoyed by “the vaccine rollout as well as massive federal support,” led the authors of the report to conclude that Clark County’s economic conditions should “improve much more rapidly and vigorously” in the third quarter of the year.

“The fall into recession here in Nevada was dramatic and fast. And the recovery has also been dramatic and fast,” said Stephen Miller, a professor of economics at the UNLV Center for Business and Economic Research and co-author of the a survey report.

“I don’t think anyone predicted that level of recovery,” Miller added.

The jump in confidence is a far cry from how business leaders were feeling in the spring of 2020 after businesses were forced to close as part of the state’s plan to slow the spread of the COVID-19 virus. The survey at that time showed confidence levels so low that they rivaled those seen during the Great Recession.

Nevada’s economy, much like the rest of the country, has rebounded far faster than most forecasters predicted. In December, members of the state Economic Forum said that it could take until late 2022 before Nevada got back to pre-pandemic economic levels.

‘Something to put their arms around’

But since then, vaccines have become widely available to Nevadans, most COVID-19 restrictions on businesses have been lifted, and the state’s main lifeblood industries of gaming and tourism — notoriously slow to recover after economic downturns — surged back to life this spring after capacity restrictions were pared back.

The report noted that while visitor volume in April was nearly 30 percent lower than April 2019, gaming revenue was actually up 7 percent from that same time period “thanks to strong consumer spending fueled by strong federal and monetary responses to the COVID-19 recession.”

Nevada casinos in May broke a 14-year-old record by bringing in an all-time record of $1.23 billion from gamblers across the state, marking the third consecutive month that state gaming win eclipsed $1 billion.

Miller, however, is somewhat skeptical of the confidence levels and said they might be a bit “overblown” because of the pent-up demand from people who had spent the better part of a year inside their homes due to the pandemic.

“People were looking for something to put their arms around,” he said.

John Restrepo, founder of RCG Economics, pointed to the multiple rounds of federal stimulus money as a major part of that faster-than-expected recovery, noting that roughly two-thirds of the economy is driven by consumer spending.

“The extra money sloshing around the economy has helped,” he said.

Whether the federal government will send out a fourth round of stimulus checks remains unclear. But Restrepo said that at some point that federal relief money will go away, and that would likely have some effect on the economy.

“That doesn’t mean we’ll go backwards necessarily, but it’s not really sustainable so some correction will occur,” he said.

While consumer and business confidence seems to be soaring, both Miller and Restrepo expressed concern about the recent uptick in COVID-19 numbers and what that could mean for the state and its economy come fall and winter.

Several key metrics have returned to levels not seen since February, including test positivity rate and COVID-19 hospitalizations as the more-contagious delta and alpha variants have become the predominant strains detected in Nevada.

Meanwhile, the number of Nevadans getting the COVID-19 vaccine has slowed dramatically since April, and the vaccination rates in Nevada and Clark County both trail the national average. A first wave of a Federal Emergency Management Agency “surge team” was deployed this week in Southern Nevada to help boost those vaccination efforts.

“The risk to the recovery is the virus,” Miller said.