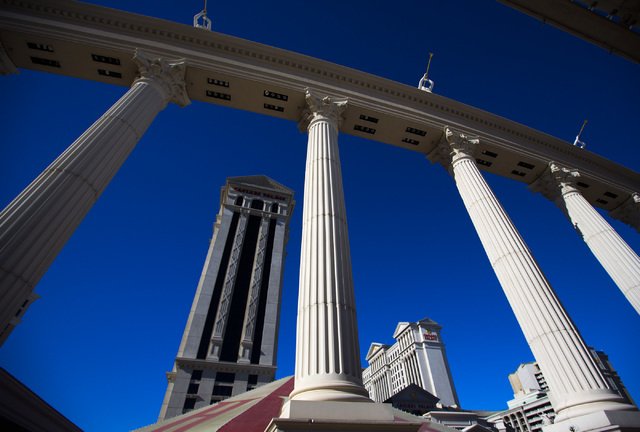 Caesars Entertainment Corp. plans to invest in new projects on the Strip as tourism continues to grow, vacancies drop and room rates rise.

The hospitality company has as much as 90 acres of under-developed land on the east side of the Strip and about seven acres in front of Caesars Place, Chief Financial Officer Eric Hession said on the first-quarter earnings call Tuesday in response to a question on future investments.

The vacant land “would be prime for potential development, from additional convention space to retail to other offerings,” said Hession. Chief Executive Officer Mark Frissora added the company has “well-defined” plans for the plots, without giving any details.

Caesars would only be able to start investments in new Las Vegas projects when its main unit, Caesars Entertainment Operating Co., emerges from bankruptcy. The company expects that to happen before October.

Hession said Las Vegas hotel rates can continue to move higher as visitations rise with little new supply “in the next 2 to 3 years.” Wynn Resorts and Genting Group have plans to develop projects on the Strip. Wynn plans to begin construction of Paradise Park by next year.

“When you get high hotel occupancy rates, your average daily rates can really rise and that is what we are experiencing,” he said.

Caesars is undertaking a massive, multi-year refurbishment of its properties to capture higher prices. The company plans to renovate 7,000 rooms nationwide this year, including the rest of Planet Hollywood’s 2000 rooms in Las Vegas.

The company spent $59 million in the first quarter upgrading hotel rooms compared with $37 million in the year-earlier period, according to the company’s filings posted Tuesday.

The expenditures were primarily related to renovation projects at Planet Hollywood, Harrah’s Las Vegas, Flamingo Las Vegas and Harrah’s Atlantic City, according to the filing.

Caesars will have renovated more than 50 percent of its Las Vegas rooms by the end of this year since the program started in 2014. The modernized rooms are fetching higher prices, Frissora said on the call.

“Our Las Vegas investments continue to be an excellent use of capital, representing low risk and high return,” Frissora said.

Caesars first-quarter net loss widened to $524 million from $274 million in the prior-year period, driven by a $466 million accrual related to the CEOC bankruptcy restructuring.

Caesars operates 47 casino properties across 13 states and 5 countries. The company’s resorts operate primarily under the Caesars, Harrah’s and Horseshoe brands.